Bajaj Auto launched its most powerful motorcycle yet, the Dominar 400 at highly competitive prices.  The standard model has been priced at INR 1.36 lakh while the ABS equipped variant comes at INR 1.50 lakh. 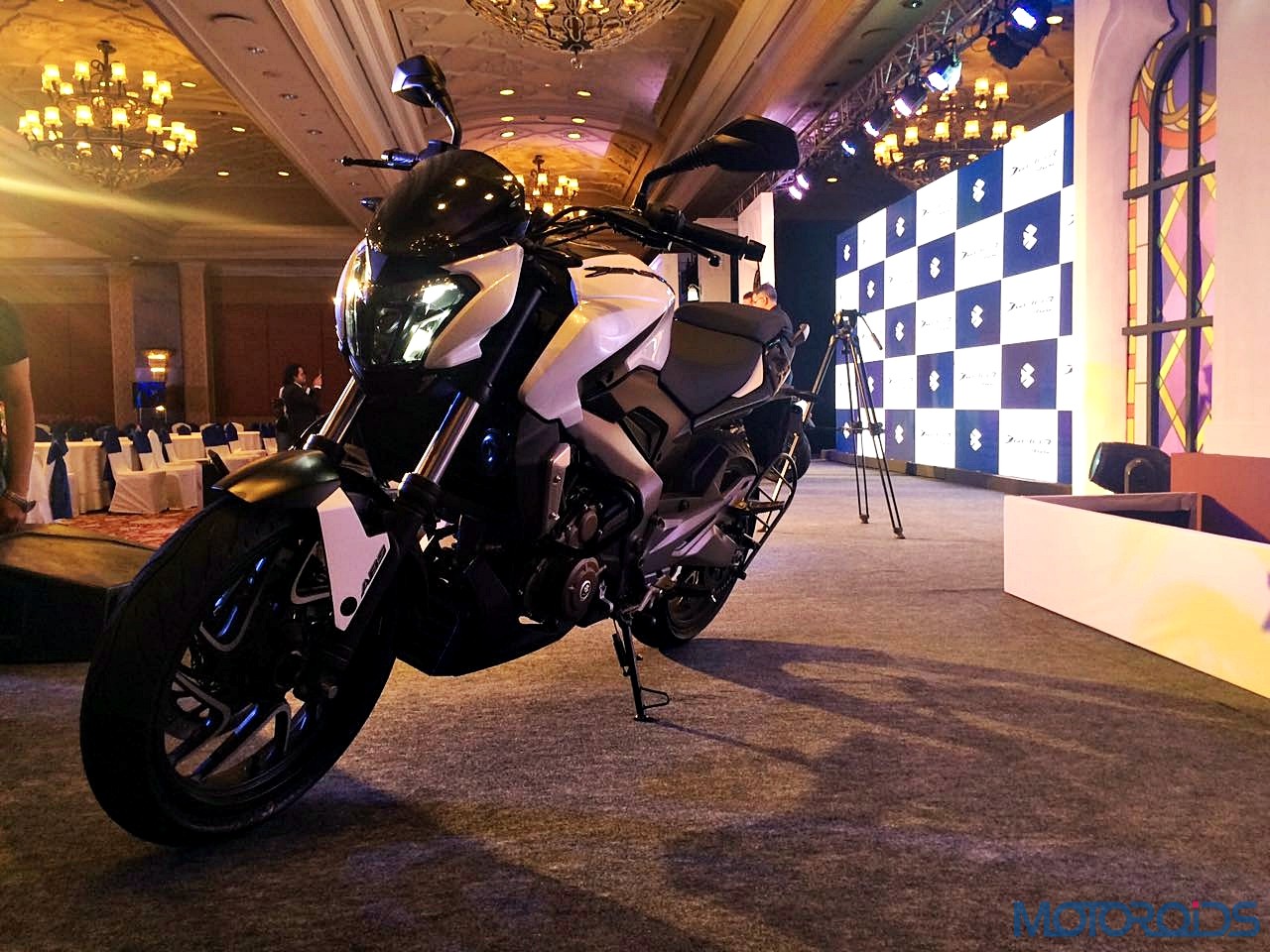 Visually, the Dominar 400 gets muscular and aggresive styling which Bajaj calls Alpha Male Design. The motorcycle is built around a perimeter frame and features a new contoured swingarm. The frame is claimed to provide lowest possible centre of gravity along with torsional rigidity. The long feature list includes a full LED headlamp with Auto Headlamp On (AHO), optional twin channel ABS and a full digital instrument cluster. Bajaj claims that the new LED headlamp makes the motorcycle visible from approximately 1.5 km. The reverse LCD split speedometer divides the display into primary and secondary consoles for a reduced clutter in the cockpit. 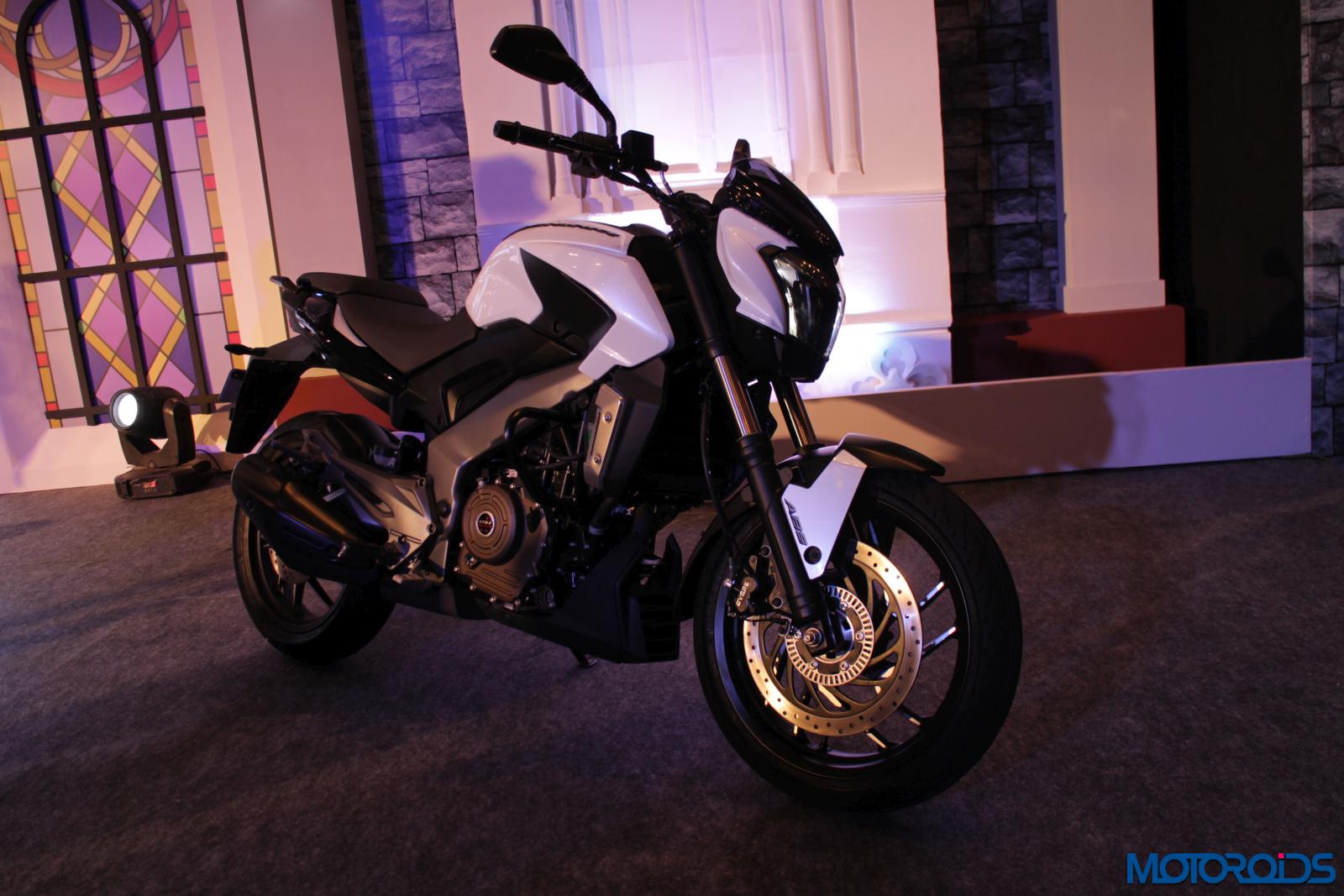 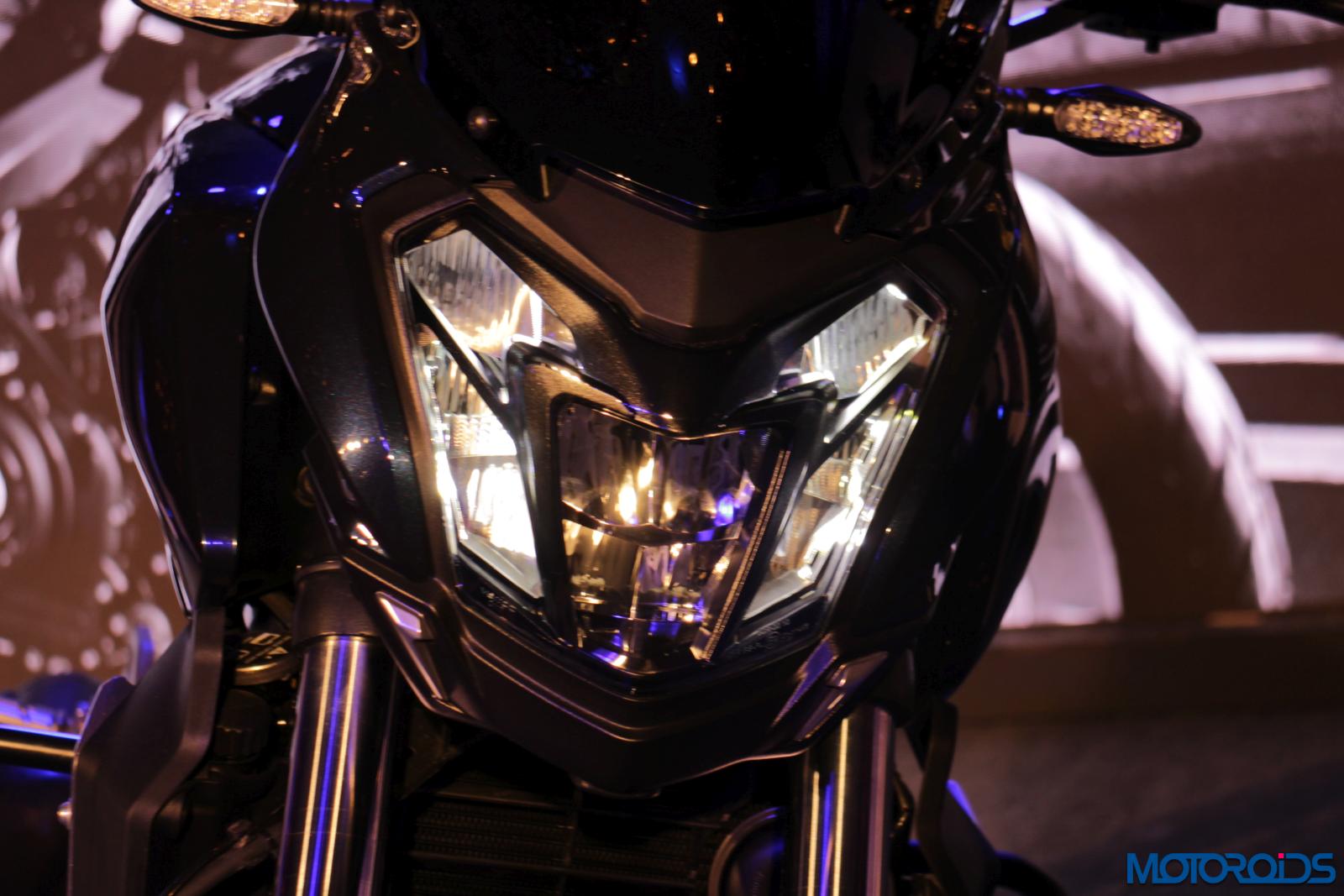 That LED headlight appears to have come straight out of a Sci-Fi flick. The full LED setup with balanced white light will definitely offer better illumination 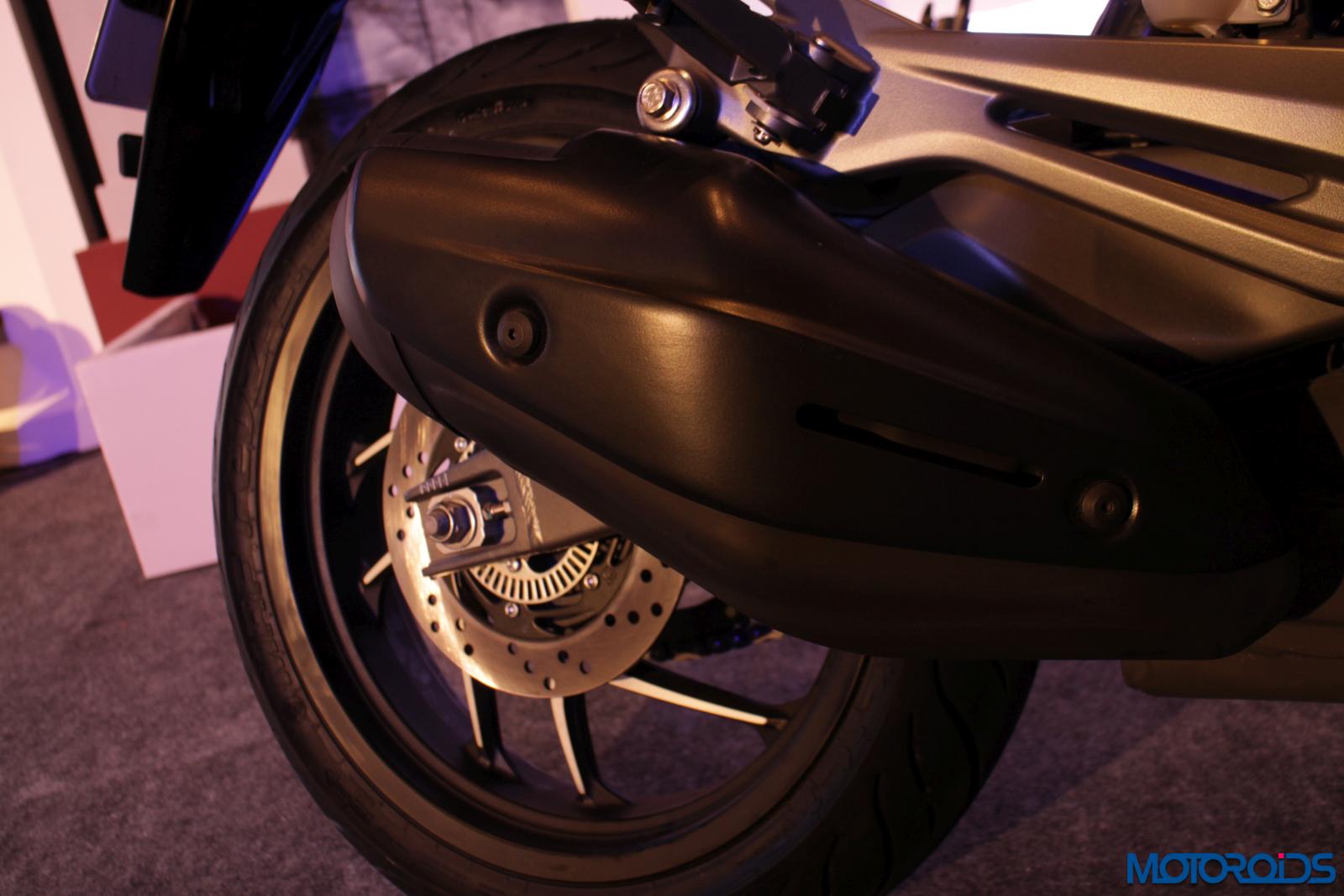 The compact exhaust canister will definitely enhance centralisation of mass which will aid the handling department. The design looks pretty neat too 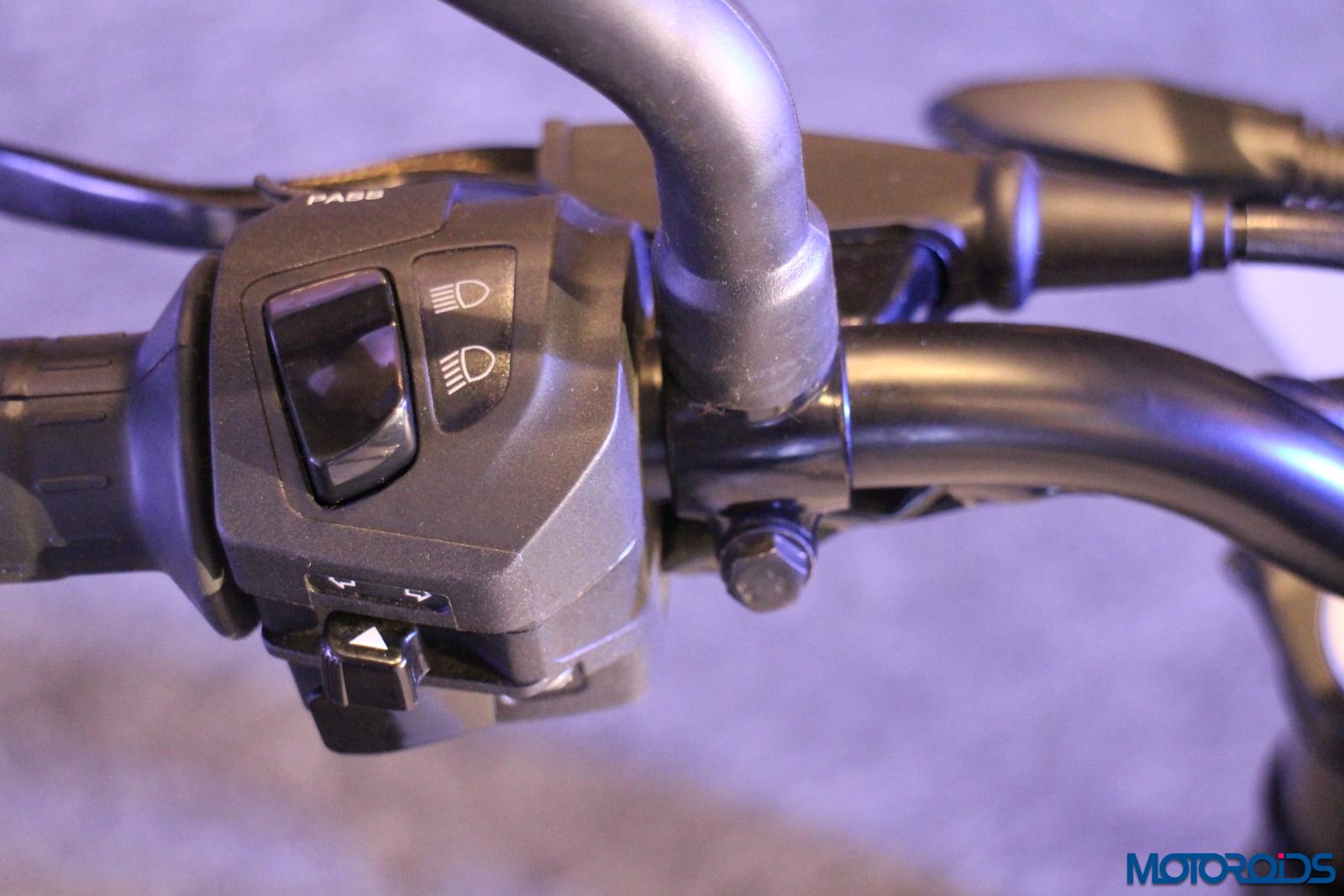 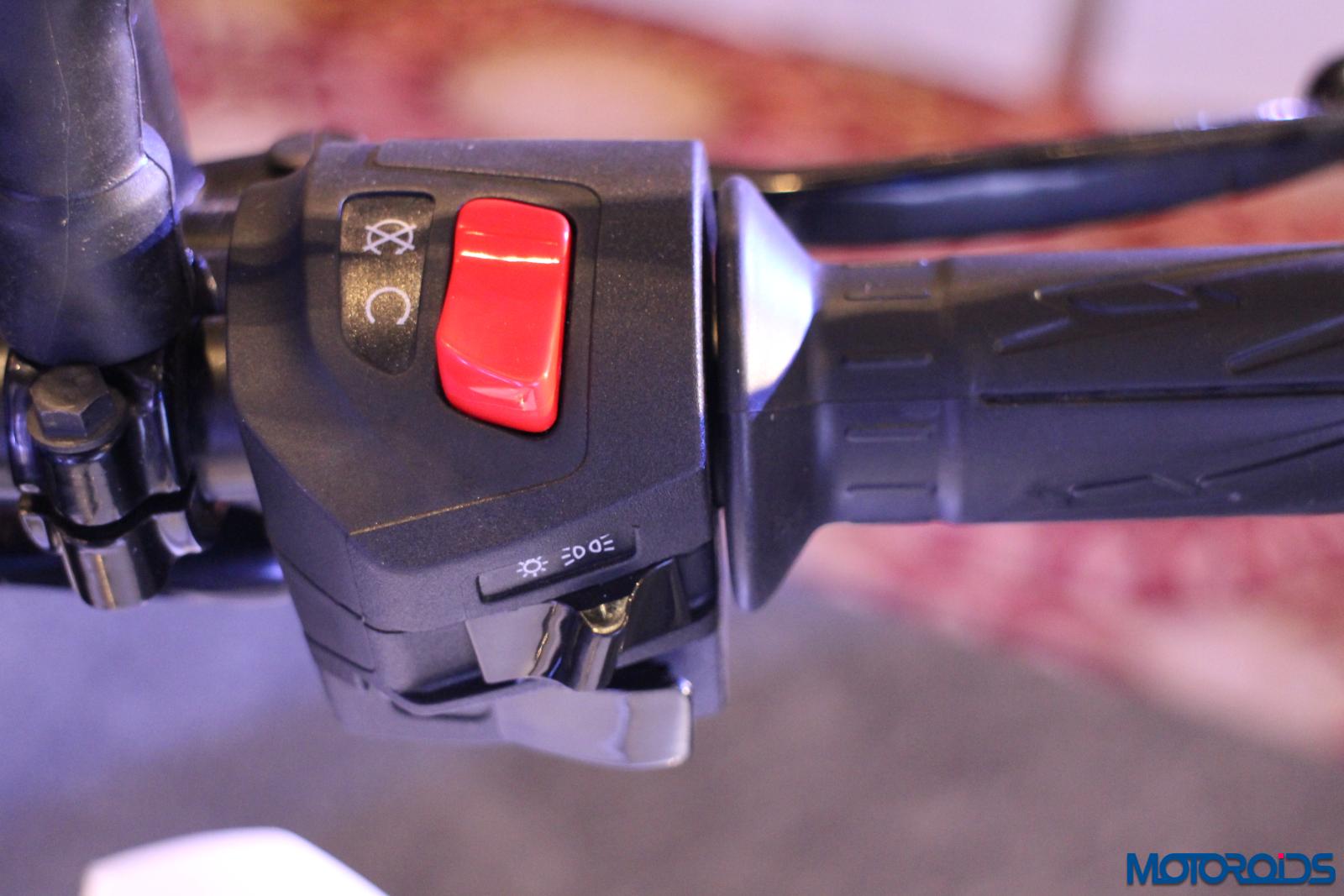 The switchgear comes straight from the Pulsar NS200/AS200. The headlight switch can only toggle between full beam and pilot lamps 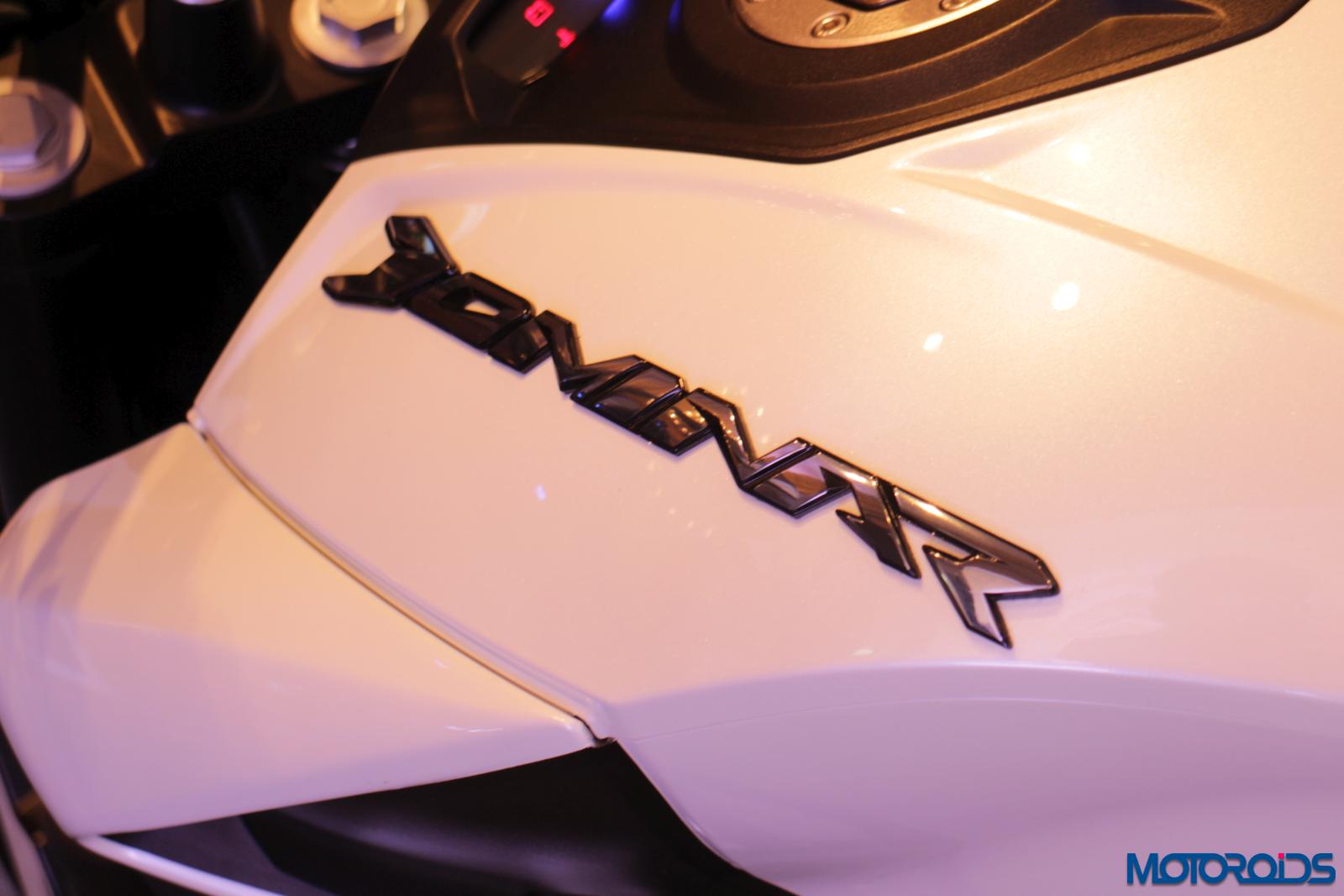 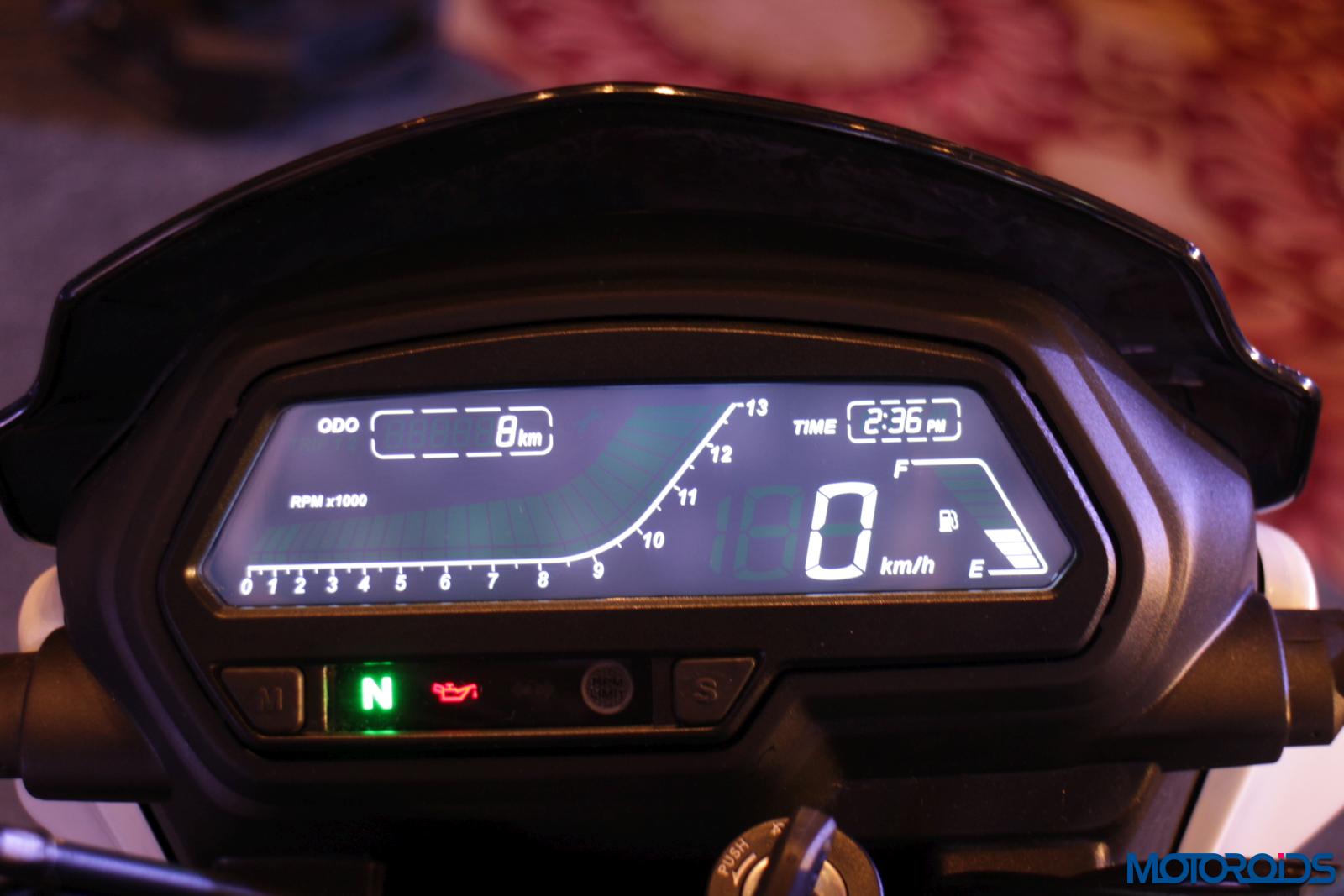 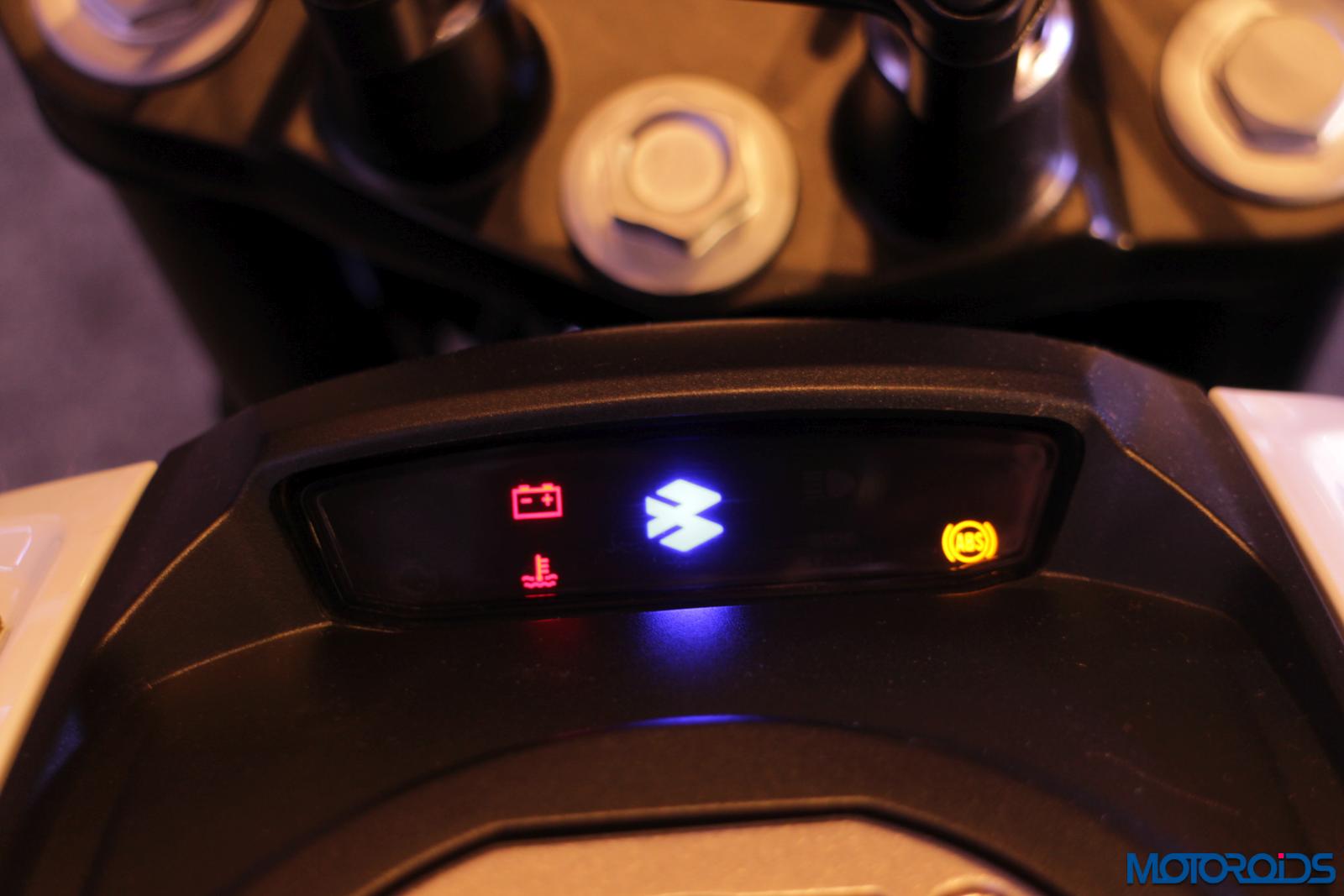 The split display is aimed to reduced clutter in the cockpit 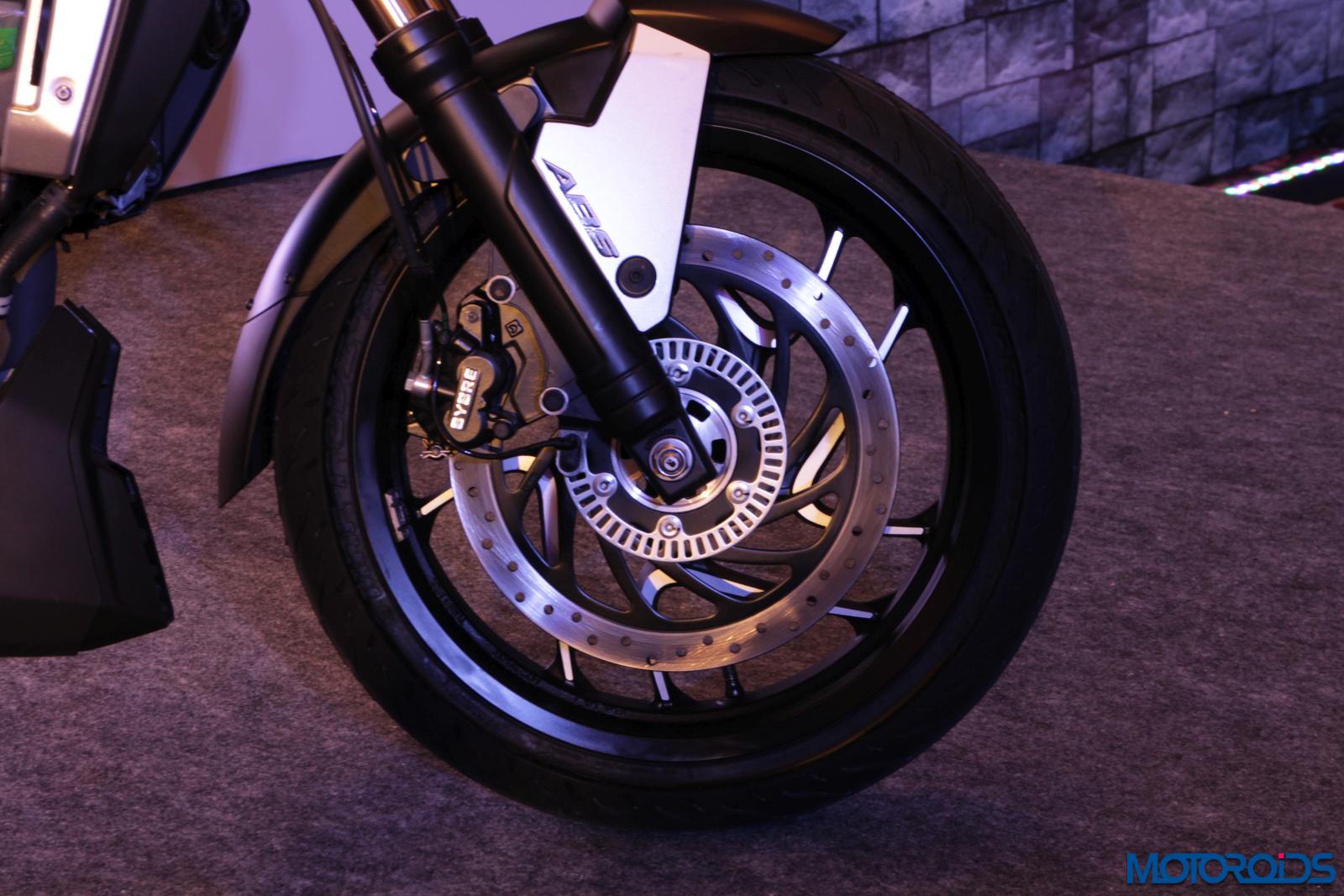 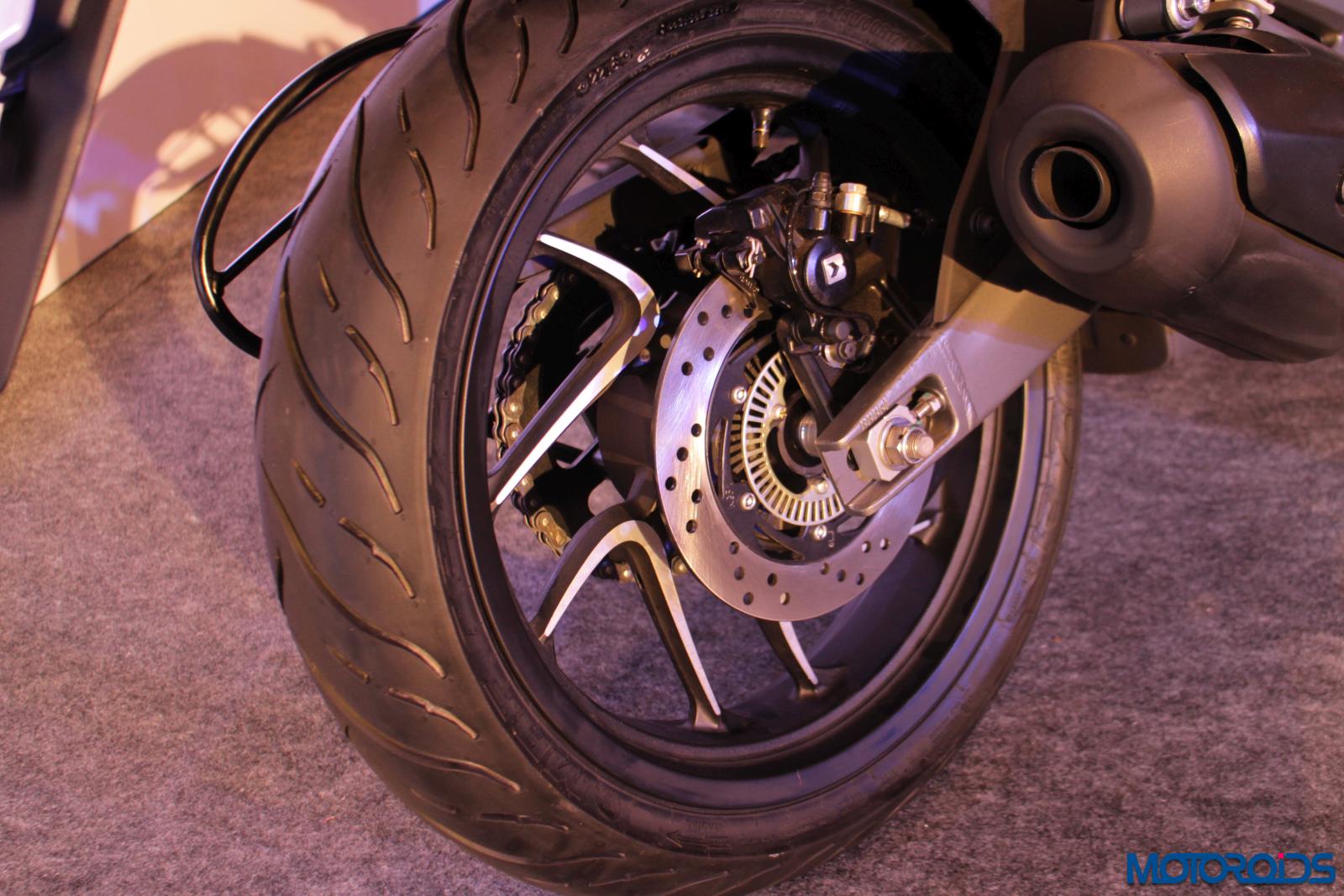 ABS equipped variant is claimed to bring the motorcycle to a standstill from 100 kph in 9 seconds and within 46.19 meters

Suspension duties are performed by the 43mm hydraulically damped front forks and a rear 77mm dia dual-spring mono-shock with its additional nitrox damper. The new Dominar 400 rides on 110/70-17 Radial front tyres and 150/60-17 Radial rear tyre which are rated to operate at 180 kph.

In terms of performance, the new Dominar 400 draws 35 PS of power at 8000 rpm and 35 Nm of torque at 6500 rpm from its 373.2cc triple spark DTS-i, liquid cooled, fuel injected, single cylinder engine with slipper clutch. The engine is tuned to deliver low and mid-range torque and Bajaj claims that about 28 Nm of torque coming in at 3000 rpm, building upto 35NM at 6500 rpm. The engine comes mated to a six-speed transmission. The motorcycle can accelerate from 0-100 kph in 8.23 seconds while the top speed is rated at 148 kph which is claimed to arrive in mere 20 seconds. The operating altitude is rated at 0-18,380 feet above sea level.

Stopping power is provided by a 320 mm disc upfront and 230 mm disc at the rear. The motorcycle also gets an optional twin channel ABS. The ABS equipped model is claimed to stop the motorcycle from 100 kph in 9 seconds and within 46.19 meters.

Check out the complete technical specifications below followed by the official press release from Bajaj. Do share your views about the new Bajaj Dominar 400 through the comments section below:

Here is the official release of Bajaj Dominar 400:

Bajaj Auto has dominated the Indian Sports motorcycle market and maintained its leadership for 15 continuous years. Today, Bajaj Auto announced its new brand for premium sports bikers– the Dominar. The Dominar 400,powered by a 373cc triple spark four valve DTS-i engine with fuel injection and liquid cooling, is the first of a series of big muscular bikes for the fast growing premium biking segment.

The Dominar 400 takes its inspiration from the night. When other bikes hesitate to step out and meet the intimidating darkness of the night; the Dominar 400 rises to meet, and master any challenge that the man or nature may offer.

Engineered to dominate, the Dominar 400 comes with a massive perimeter frame and contoured pressed-steel swing arm to deliver a rock-solid ride. The 373.2cc DTS-i engine delivers outstanding linear performance through its smooth six speed transmission and slipper clutch. With 35PS of enormous power and immense 35Nm of torque, the Dominar 400 powerfully propels the rider and pillion at any speed with enough reserve power for add on rush. The advanced liquid cooling system ensures smooth engine performance even on long rides.

Dominar 400 has large 43mm telescopic front forks with a unique dual spring mono suspension to ensure superior handling on any surface. The twin channel ABS empowered 320mm front disc and 230mm rear disc inspire confidence and complete control. Dominar 400 is the only motorcycle in India to have full LED mosaic head lamps with balanced white light and vertical AHO (Automatic Headlights On) to cut through the darkest of nights.

Speaking on the launch, Mr. Eric Vas, President – Motorcycle Business, Bajaj Auto Ltd, said, “Dominar 400 is the biggest motorcycle in its class. It is big yet comfortable, fast yet sure footed, large yet maneuverable, powerful yet easy to control, and premium yet not out of reach for customers. With the Dominar 400, bikers can finally dominate cities, highways and mountains at any time and under any riding conditions. Domination comes naturally when you ride a Dominar 400.”

The Dominar 400 with ABS comes in 3 colors, Midnight Blue, Twilight Plum and Moon White.Priced at INR 150,000/- for ABS and INR 136,000/- for Disc brake version (Ex-showroom-Delhi), the Dominar 400 shall initially be sold to customers at 80 showrooms across 22 towns in the country. Test ride and display bikes would be available at these showrooms starting tomorrow. Customers can reserve their Dominar 400 though a centralized online booking with INR 9,000. Online bookings have commenced today and customers can choose the dealer they would like delivery through. Deliveries will commence in January 2017 and balance payment would be made directly to the selected dealer.