Electric motors can deliver enormous amounts of torque right from the word go. This is primarily the reason why the Tesla Model S has beaten many proper supercars on the drag strip. How is it, then, that no major manufacturer has considered building an all-electric off-roader? Perhaps Mo Aoun also had the same doubt in mind when he decided to grant an off-road shape to the Model X.

The Model X was the first crossover developed by the electric mobility startup. Sitting at the top of Tesla’s line-up, the X gets some really swanky features like the gull-wing doors, three rows of comfortable seating and a ginormous touchscreen control system. It also gets Tesla’s advanced Auto-Pilot feature as standard equipment. 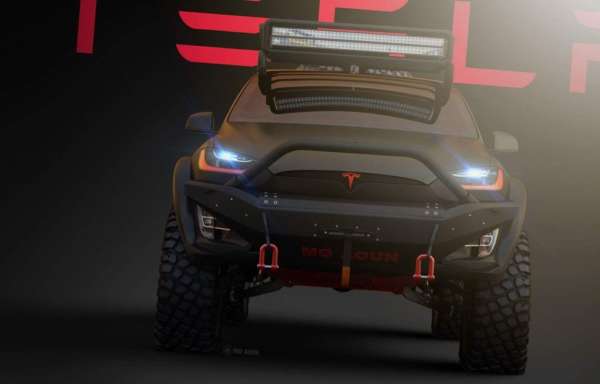 Speaking about the build, Teslarati revealed, “Mo was inspired to create the beast after talking with a friend about ideas on how to get a job working on the Forza Horizon game with 10 Turn Studios. He had previously experimented with “Frankensteining” an Audi R8 into an off-road vehicle which gained widespread exposure on the front page of Behance.”

Mo took over 7 hours to completely sketch the project and another 2 hours to render it. He decided to add a lift kit with large off-road spec tyres. The rendered X gets flared wheel arches and additional plastic skirting all around. The front gets an aggressive metal bull-bar that contrasts with the standard curvaceous bumper from Tesla.

The roof gets a new rack with additional light bars and the spare wheel has been relocated to a new rack over the rear windscreen. The front also gets new heavy-duty towing hooks and a contrast colour scheme for the Tesla logo and the door handles.

Mo’s 14 years of experience as a graphic designer shines through as the detailing on the rendered Model X is simply fantastic. Now, if only someone could make it come to life. Tesla, you there?