Recent announcements by government have shown a definite push towards EV’s. Reduced GST, FAME II policy and push towards charging infrastructure means EV’s are here to stay. We at Motoroids have been EV enthusiasts and recent happenings in the industry has made us even more interested in the space.

We have explored the possibility of using an E-Scooter instead ICE driven scooters when we rode the Hero Electric Optima. Further in this series we test the Avan Motors XERO+. Avan Motors was established in 2015 and is pushing forward with their electric scooter lineup and 40 dealers selling their products. 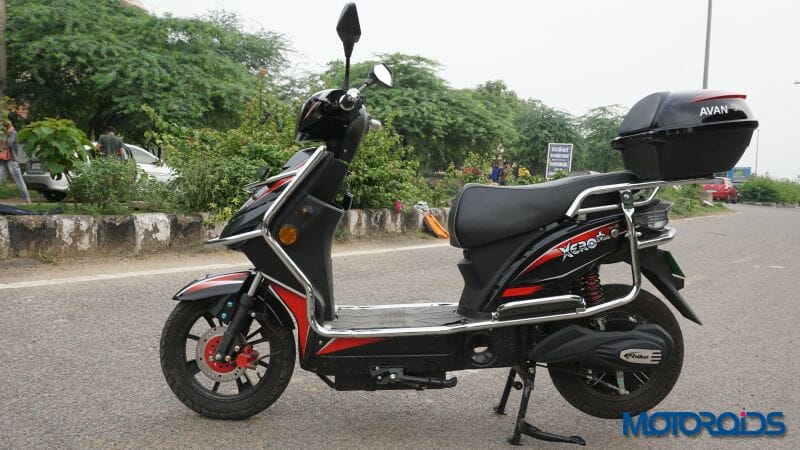 Among all the electric scooters we have ridden so far, this felt the smallest and most compact. It’s exoskeleton-ish chrome frame tries to hide the compactness of the scooter but it doesn’t help. The design is typical of any other scooter with handle mounted LED headlamp, a clean front apron which has a black insert breaking the monotony. The LED indicators are mounted behind the apron and get almost lost. As electric scooters get more and more design heavy, the XERO+ does not try too hard. However, it’s chrome frame does make it stand out. The rear mounted box which comes as a standard does provide some uniqueness to the Xero+. Tail lamps get lost below the utility box. 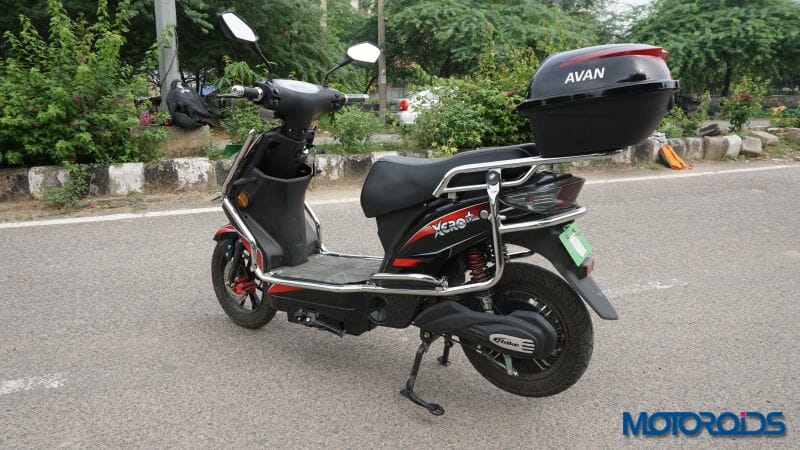 The Xero+ gets a 48V 800W BLDC Motor. The electrical power comes from a 24 AH Lithium Ion Battery. It is available in single battery and double battery configuration. With a single battery, the range is 55 Kms and with two batteries 110 Km. It gets three ‘gears’, which basically mean three riding modes. In Gear 1, the maximum speed is 35 kmph, in Gear 2, 40 kmph and in Gear 3, 45 kmph.

The batteries are mounted under the floorboard and the under seat storage is oddly designed. It is quiet deep but not wide enough for even a half face helmet. That is when the rear mounted storage box comes in handy. For the three weeks I had the scooter, I kept my helmet in the box itself, not having to carry it up and down from my apartment. I even used it for some grocery shopping. The total weight carrying capacity of the scooter is 150 kgs which is more than enough unless you are a Sumo wrestler. 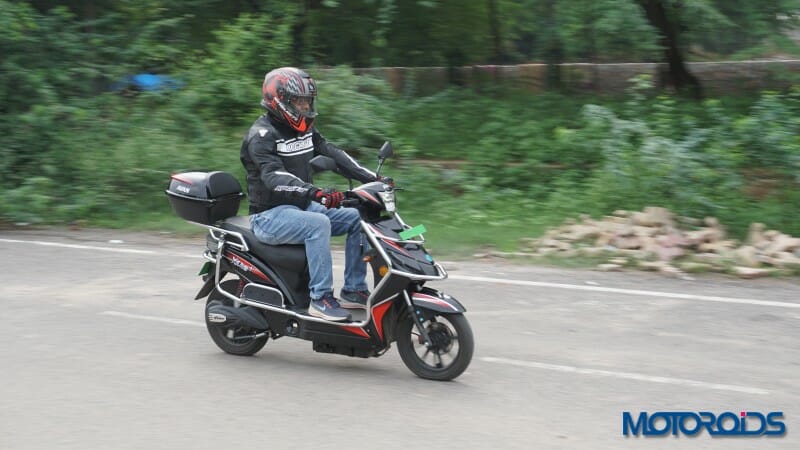 Riding it around town

Though it has hydraulic telescopic front suspension, the ride quality isn’t something to write home about. Due to it’s weight os only 85 kgs and stiff suspension setting, the rider feels all the pot holes and undulations on the road.  With floor mounted batteries with lower centre of gravity, the scooter is quite flickable in traffic. It squeezes through thin gaps in traffic quiet easily. It was a perfect tool for local grocery runs, commutes and in most situations that one might use their scooter for. However, where the top speed of 45 kmph does feel a little bit slow is long commutes or on empty roads. However, there is a hidden advantage of having limited top speed. Just close to my place on a wide and relatively open stretch of a road, there is a newly installed speed camera. When I drive my car or ride my bike, I have to be conscious and look at speedo to make sure I am sticking to speed limit. However, with a Xero+, I was giving it the full beans and now have to worry about getting a traffic challan. While the floor mounted batteries

The side stand cuts of the power to the motor. So if the stand is down, the e-scooter won’t move. A nifty little feature we see in some high end petrol scooters off late. 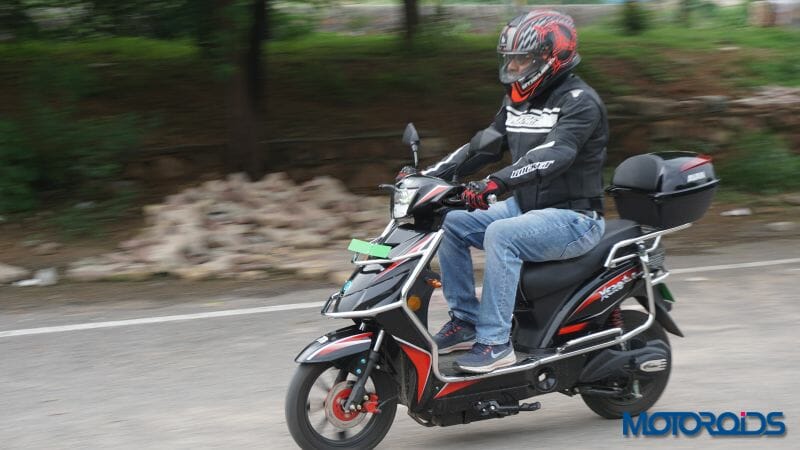 The electric scooter just like other electric scooters comes with a battery charger which can be plugged into any 5 AMP domestic electric socket. It takes about 4-5 hours for the battery to be fully charged.

The unit we had did not have flick and switch battery option. So, if you run out of juice in one battery, you have to manually change the battery connections to the other one. There was set of MCB’s under the seat which looked like was designed to switch from one battery to other, but it was not functional. Changing the battery was not easy at all. One has to first disconnect the battery, lift it out, put the second battery (placed right next to it, under the floor board) and connect it. When one reaches home, one has to again switch the battery to charge the discharged one. However, the effort can be saved by removing the battery and charging it separately in your home. It would also come in handy for people living in apartments who might not have charging points at the parking spot. If one does have a charging point near the parking, plug the charger into the electrical point, and put the charging cable into the charging port located below the seat.

Avan Xero+ is a nifty little electric scooter which would be perfect for youngsters and women who have short commutes. It does it job from going from Point A to Point B, the rear storage box is extremely useful. However, it would be uncomfortable for taller and people with bigger frame. It does need a functional battery switching mechanism which would really add to it’s usability and ease of ownership. Xero+ is almost there but just misses out on a few things.