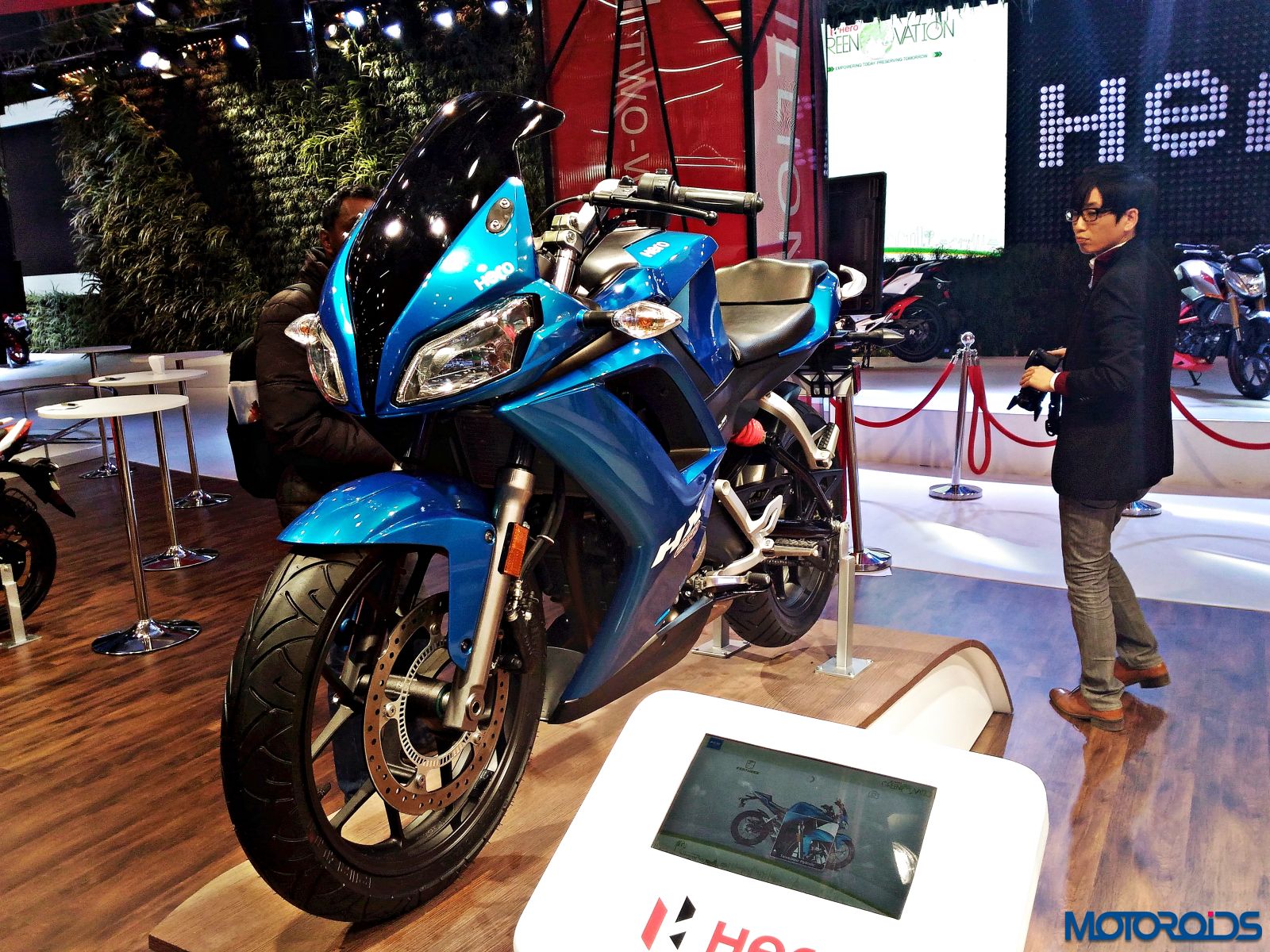 The Hero MotoCorp pavilion at the 2016 Auto Expo was mostly about cosmetically updated products. So apart from the more powerful Xtreme 200 S, the production spec HX250 and the XF3R concept motorcycle, most of the products were cosmetically updated motorcycles and scooters with new paint scheme and graphic options. We have already covered some of the leading exhibits such as the Xtreme 200 S, HX250, XF3R concept, new Karizma Duo and Splendor iSmart from Hero’s pavilion on Motoroids. In this specific post we will cover the rest of products at the Hero Motorcorp Pavilion. 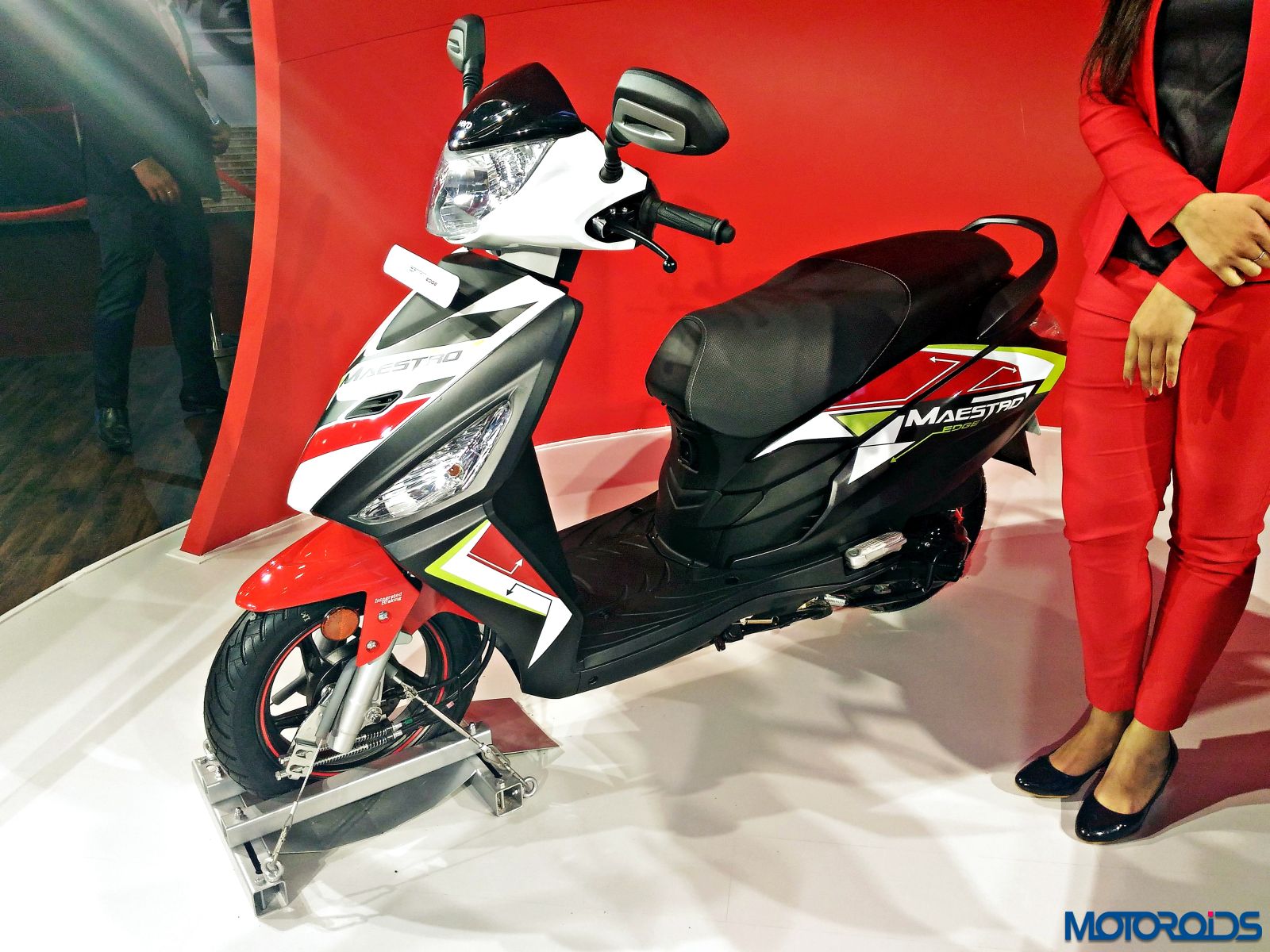 The Maestro Edge wears new graphics which is aimed to attract young audience. The multi-colour graphics look appealing but the red front fender with a solid colour is a bit of an aberration from rest of the multi-tone theme. Hero did not reveal many details about this new colour option so we really cannot comment whether this special edition is slated for production or not. Mechanical details remain unchanged from the current model as the scooter continues to draw power from 110.9cc air cooled, 4-stroke single cylinder OHC engine that delivers 8.31 BHP of power at 8000rpm and 8.30 Nm of torque at 6500rpm. 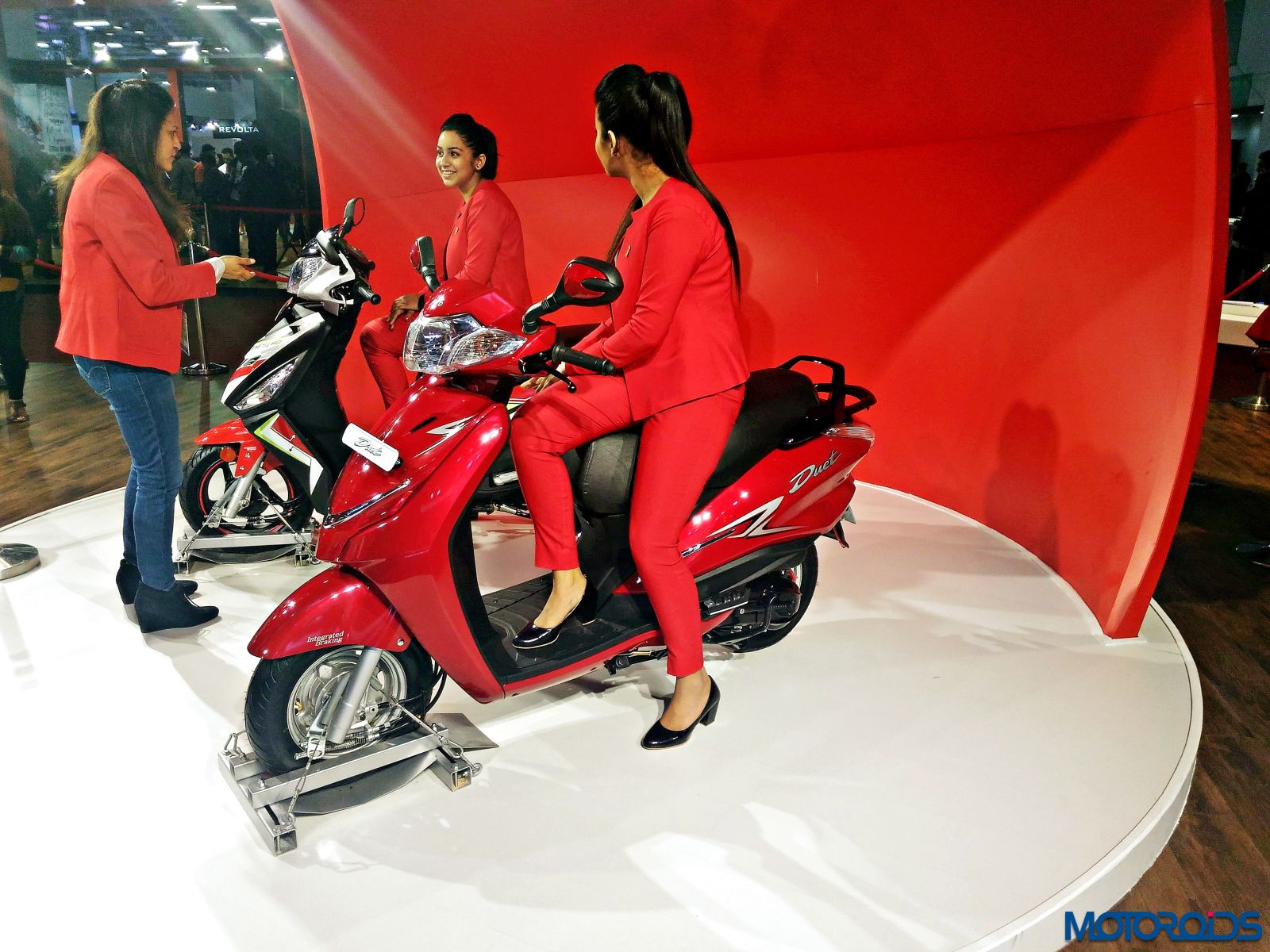 The Hero Duet exhibited at the Hero pavilion wasn’t too different from the stock model, apart from a new graphic scheme that looks like an “S” on the front apron and another one that appears like an “R” on the side panel. The scooter shares its platform and engine with the Maestro Edge so the output numbers of 8.31 BHP of power at 8000rpm and 8.30 Nm of torque at 6500rpm remain identical to the Edge. 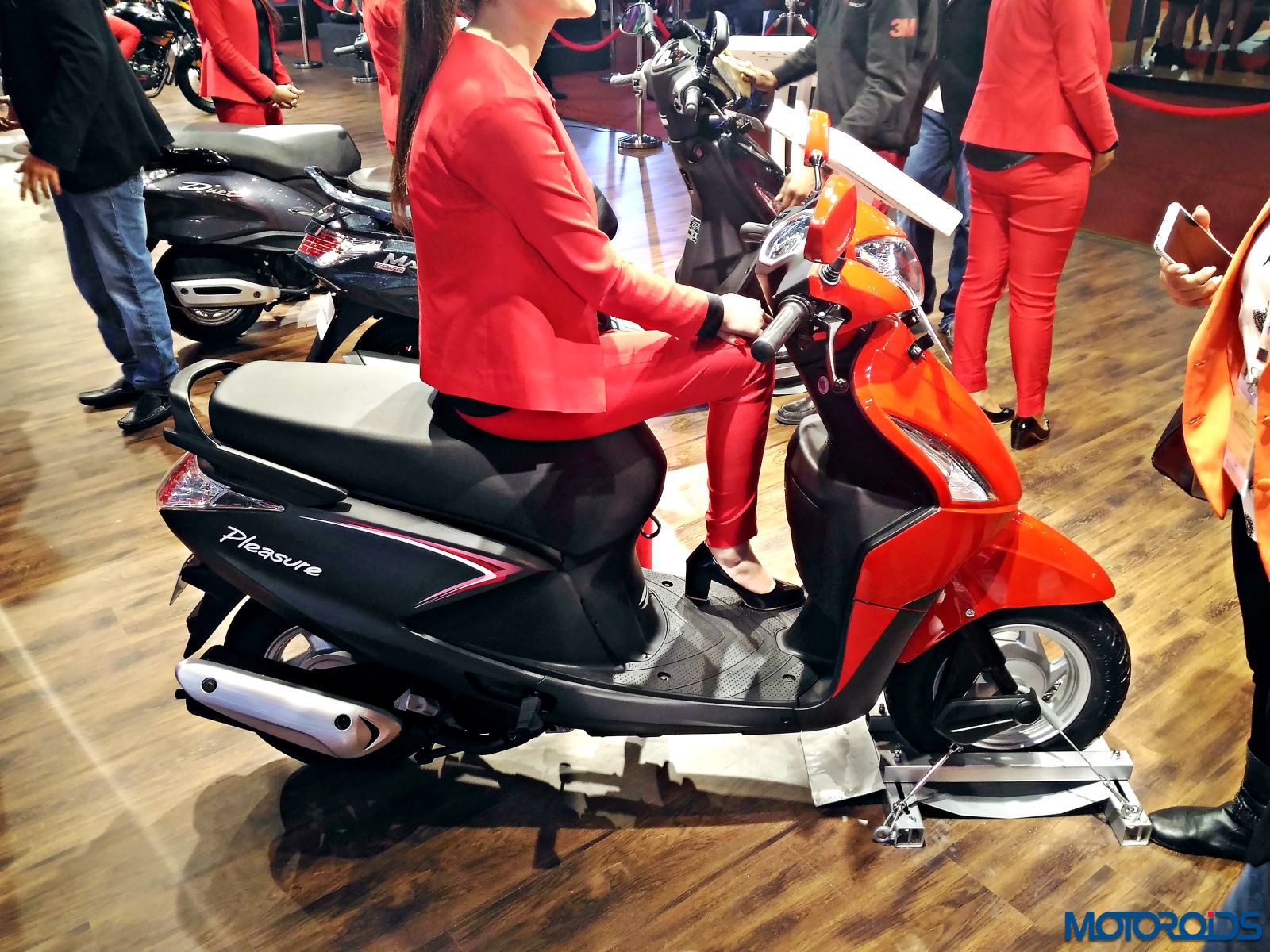 The female audience specific Hero Pleasure was also present at the pavilion. The scooter did not get any visual update and the unit on display at the motoring event donned the Radiant Red and Matte Grey paint scheme from the 10 options that the Pleasure is available with. The front of the scooter received red headlight mask, apron and mud guard while rest of the body was draped in matte grey paint with red and white graphic highlights on the side panel. Mechanical specifications include a 102cc air-cooled, 4-stroke single cylinder OHC engine that delivers about 6.9 bhp of power at 7000rpm and 8.10 Nm of torque at 5000rpm. 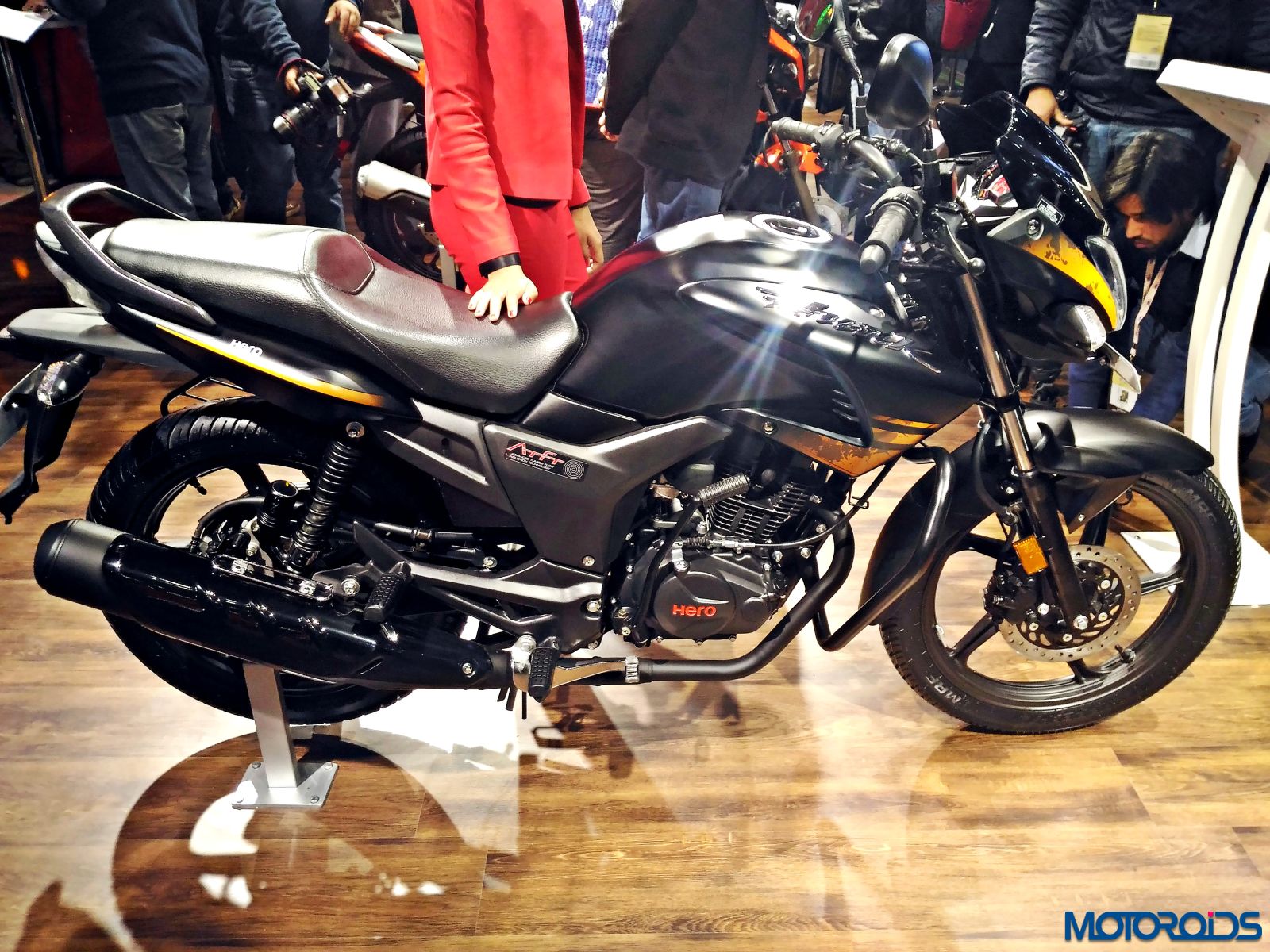 The new, more powerful Hero Hunk was also unveiled at the 2016 Auto Expo. For 2016, the motorcycle will receive new set of graphics and an engine that would be borrowed from the new Xtreme Sport. The new Hunk now puts out 15.6 BHP at 8500rpm and 13.5 Nm of torque at 7000rpm from the 149.2cc  air cooled, 4-stroke single cylinder OHC engine. The motorcycle gets new graphics which Hero calls “Sporty Speed Line Graphics” while the instrument panel is updated with a side stand warning indicator. The unit at the 2016 Auto Expo was the Matte Black version of the motorcycle. 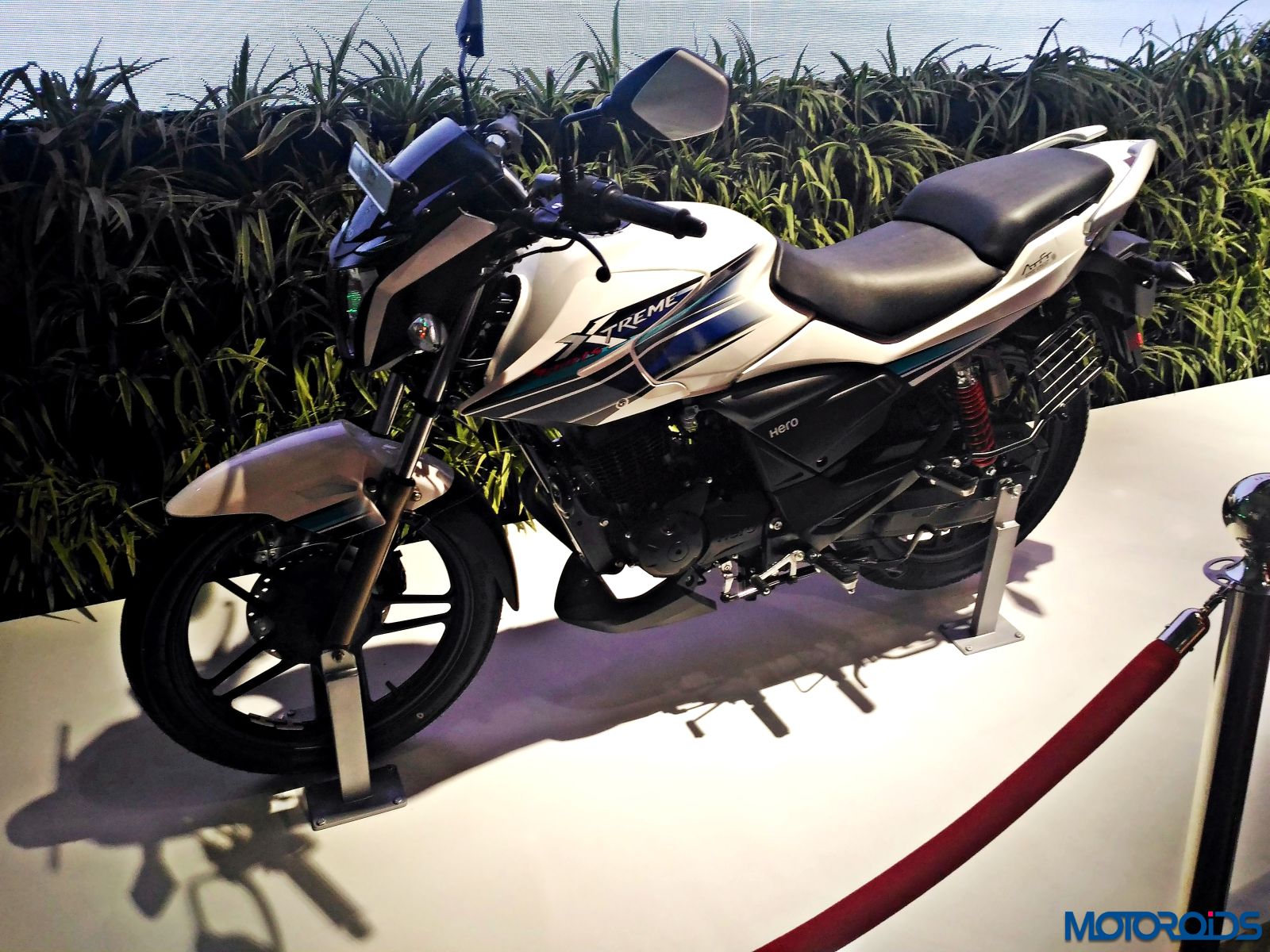 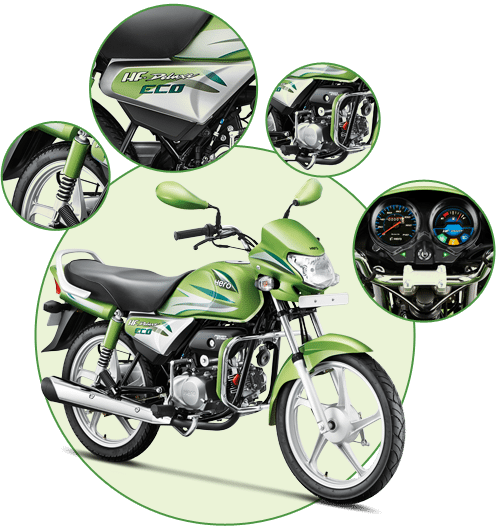 The Hero HF Deluxe Eco was also present at the motoring event but did not receive any cosmetic or mechanical details. But that seems legit as the motorcycle was launched only in 2015. The Hero HF Deluxe Eco gets a 97.2 cc air-cooled single-cylinder engine that delivers 8.36 PS of power at 8,000 rpm and 8.05 Nm of torque at 5,000 rpm. The engine comes mated to a 4-speed transmission. 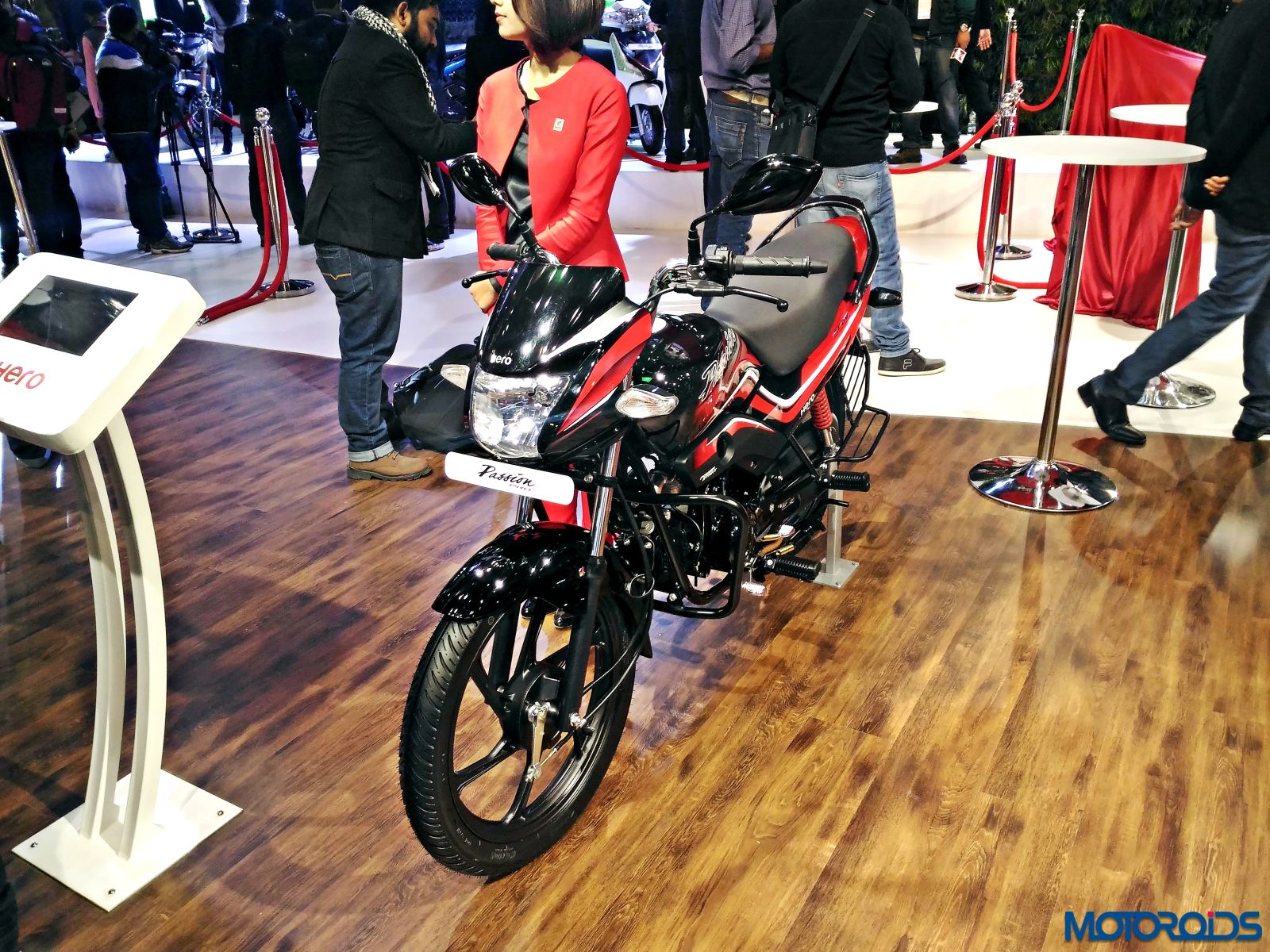 The Hero Passion Pro also came with graphic update at the 2016 Auto Expo. But apart from the updated graphics, there are no changes to this economuter from Hero MotoCorp. So the Passion Pro continues to draw power from the 97.2 cc single-cylinder air-cooled engine that churns out 8.36 PS of power at 8,000 rpm and 8.05 Nm of torque at 5,000. The engine comes mated to a four-speed gearbox. 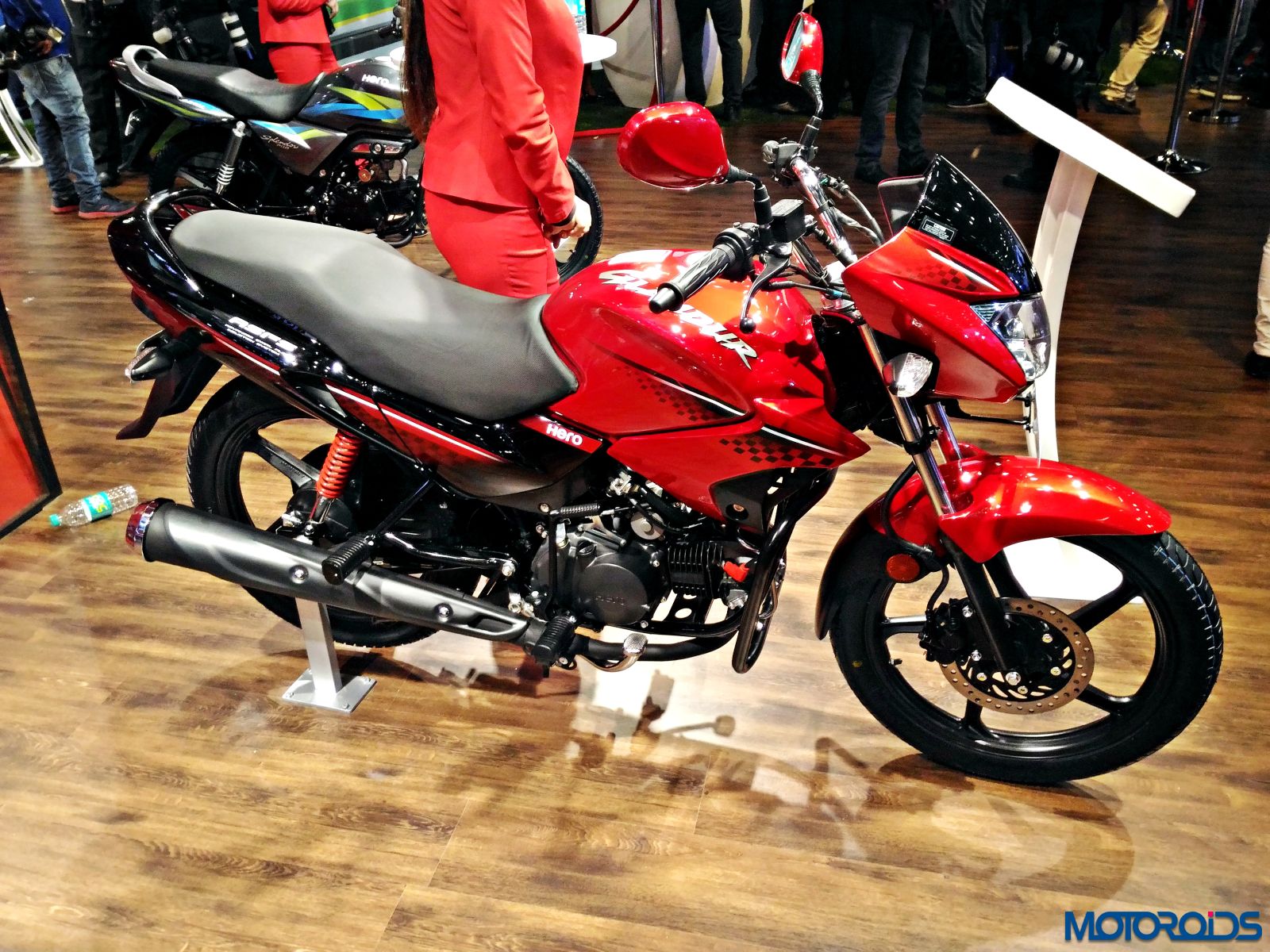 The new Hero Glamour becomes slightly more glamorous in 2016 with updated graphics but the changes are limited to cosmetics. So the 2016 Glamour uses the same 124.7 cc single-cylinder air-cooled engine that produces 9.1 PS of power at 7,000 rpm and 10.35 Nm of torque at 4,000 rpm. The engine comes mated to a four-speed transmission. 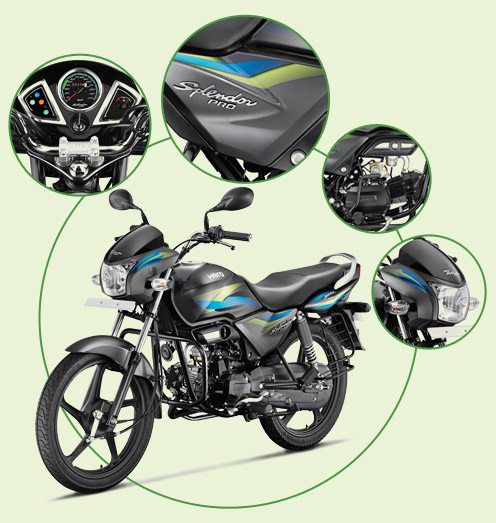 Last but definitely not the least by any aspect on the list is the Hero Splendor Pro. The new Splendor Pro too came with a new graphic set that would join the existing eight shades. The Splendor Pro too remained mechanically unchanged and continues to be propelled by the 97.2 cc  air-cooled, 4-stroke single cylinder OHC engine that puts out 8.36 PS of power at 8000rpm and 8.05 Nm of torque at 5000rpm.

Check out the complete image gallery of the Hero MotoCorp pavilion from the 2016 Auto Expo below. Don’t forget to share your views about Hero MotoCorp’s Auto Expo stand with us through the comments section below.