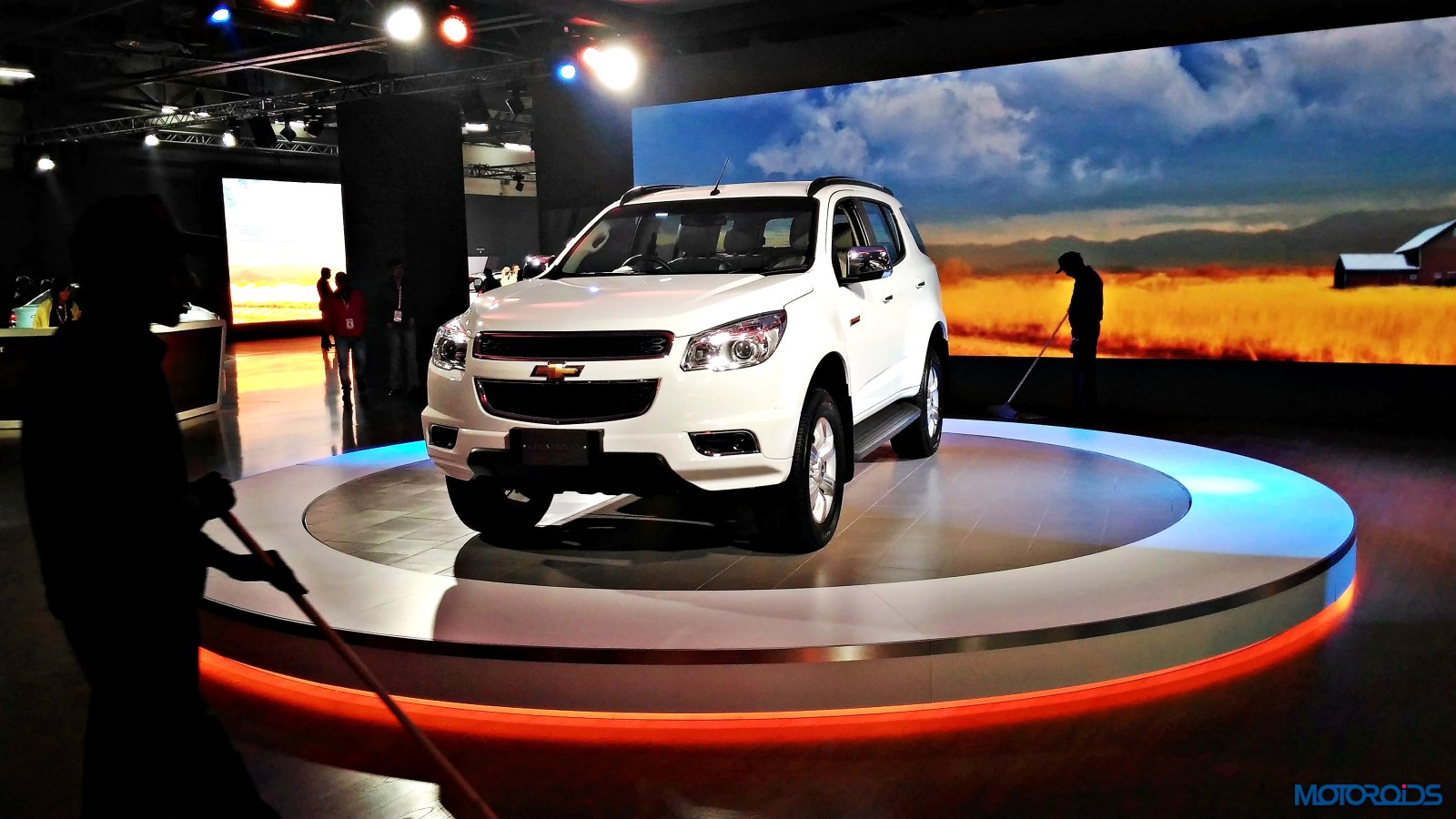 The eternal star of the Auto Expo, the Chevrolet Camaro was joined by the Corvette Stingray at the motor show to hog the majority of the limelight at the American carmaker’s pavilion. The Beat Activ and Essentia sedan also created a lot of buzz for the manufacturer. Among the everyday products, though, GM had a variety of stock and modified products from its lineup displayed at its Pavilion. The Chevrolet Trailblazer led the way among the on-sale products, along with a Manchester United themed Beat, a modified Enjoy, the upcoming Spin MPV, a special edition SAIL and yet another Beat modification among others.

Leading the production vehicle pack was the Trailblazer. The rather newly launched SUV is powered by a 2.8L Duramax diesel made out of cast iron and gives the rear wheels class leading power of 200PS@3600rpm and an equally impressive torque of 500nm@2000rpm. Coupled with a six speed AT gearbox, the car is quite a hoot to drive. The Trailblazer justifies its name by being the quickest and fastest SUV in its class. Fuel efficiency isn’t too hot though, ARAI figure suggesting 11.45kmpl, so in the real world you can expect somewhere around 7-8 km/l. 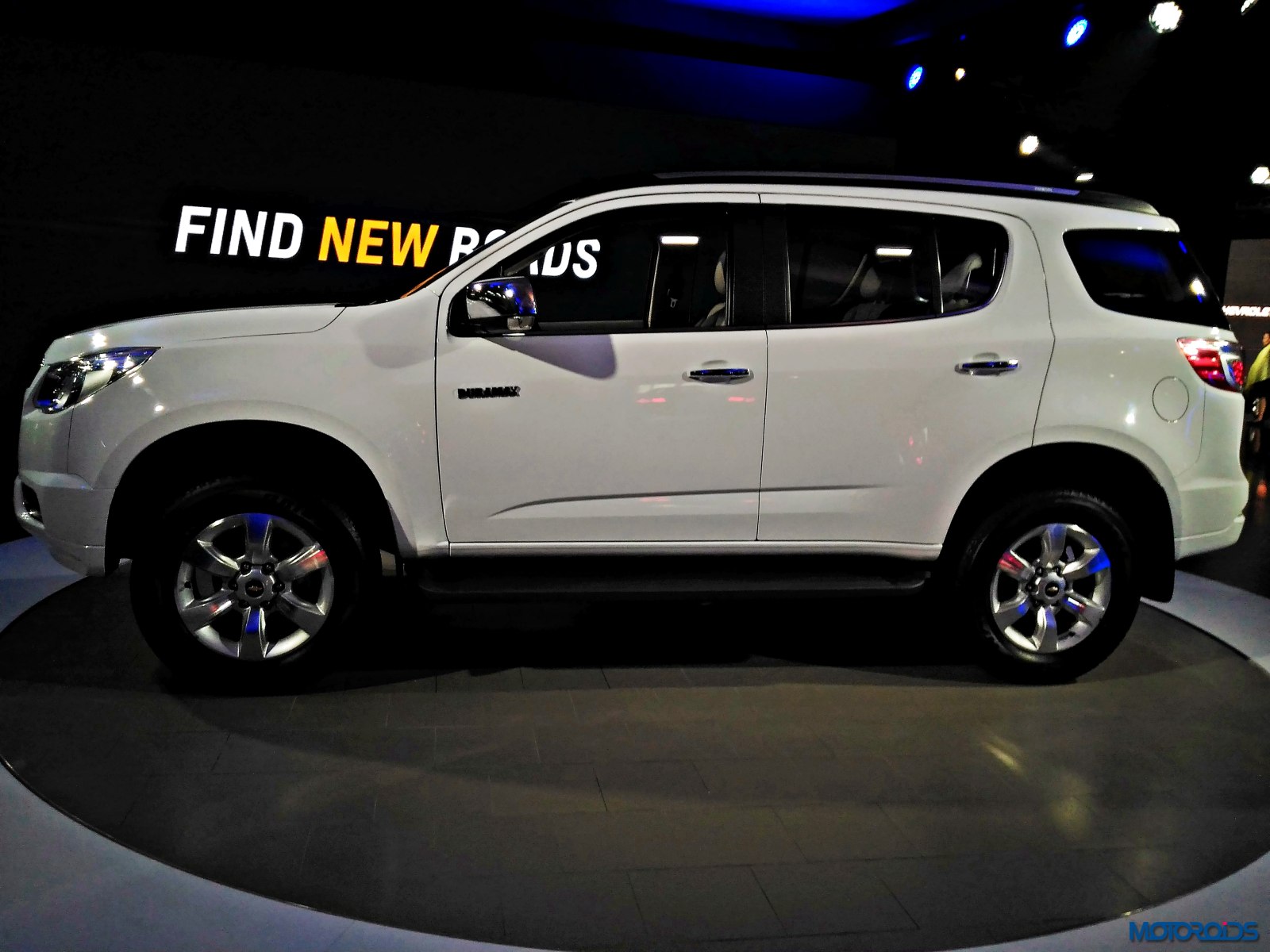 The funky looking Beat, apart from its Activ concept was also presented in a Manchester United special edition. The car in the special edition trim receives a Manchester United logo on its bonnet, on the sides, the rear door and inside the cabin as well. Special diamond cut wheels, and a slightly different black grille are the other changes on the exterior over the stock Beat. 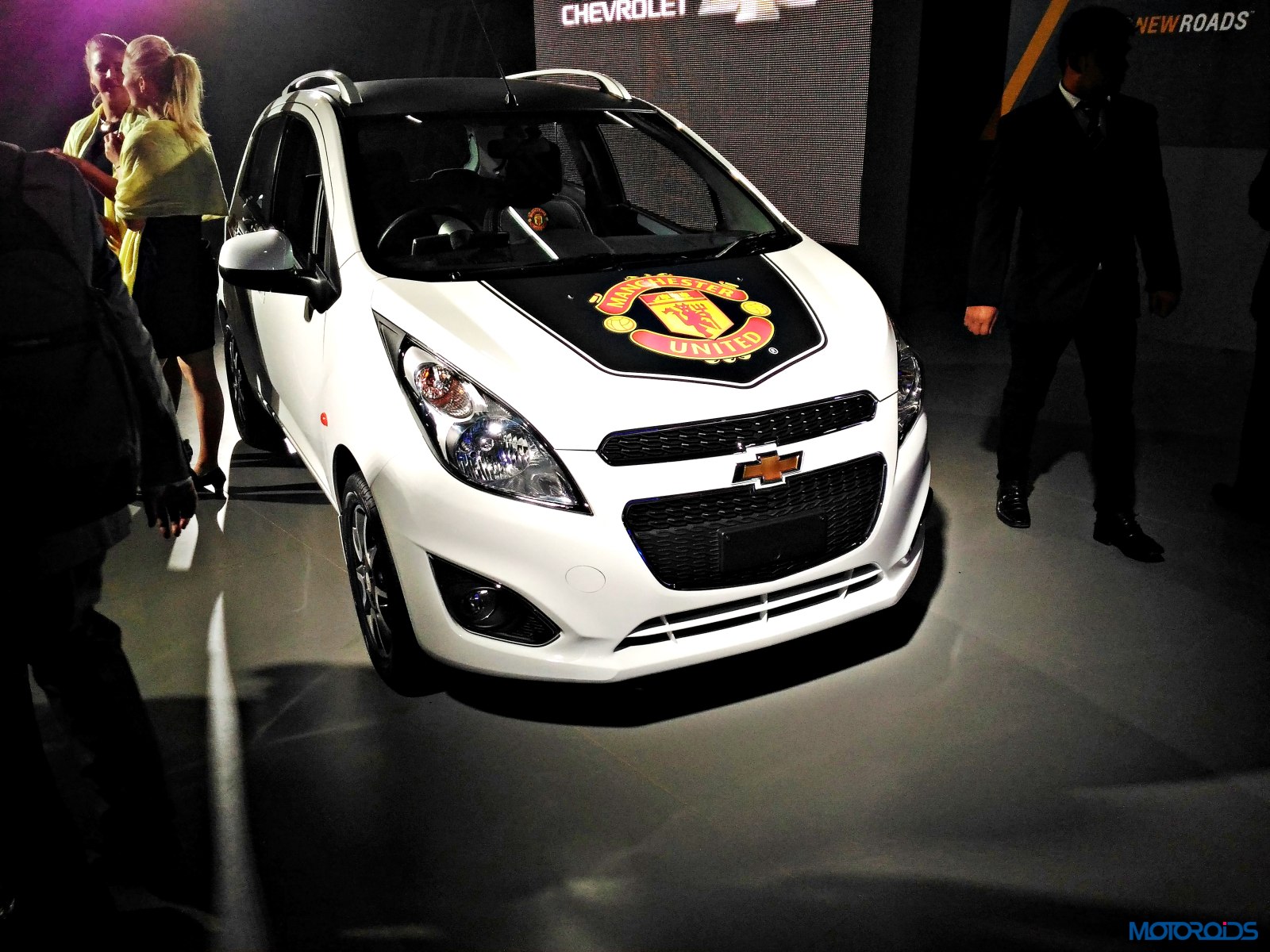 Inside the cabin, the car gets white inserts on the dash and sporty, contrasting white stitching on seats along with a red spine. The pedals are finished in shiny steel, and are studded with rubber for grip. Another sporty touch is the white bordered floor mats.

Yet another Beat special edition in red gets racy white and black graphics on bonnet, roof and sides. The rear gets a white, roof mounted spoiler. The wheels on this special edition are also new, 5×2 units which look sportier than the stock set. On the inside, the car gets red appliqués on the dash and door panels, along with sportier upholstery. 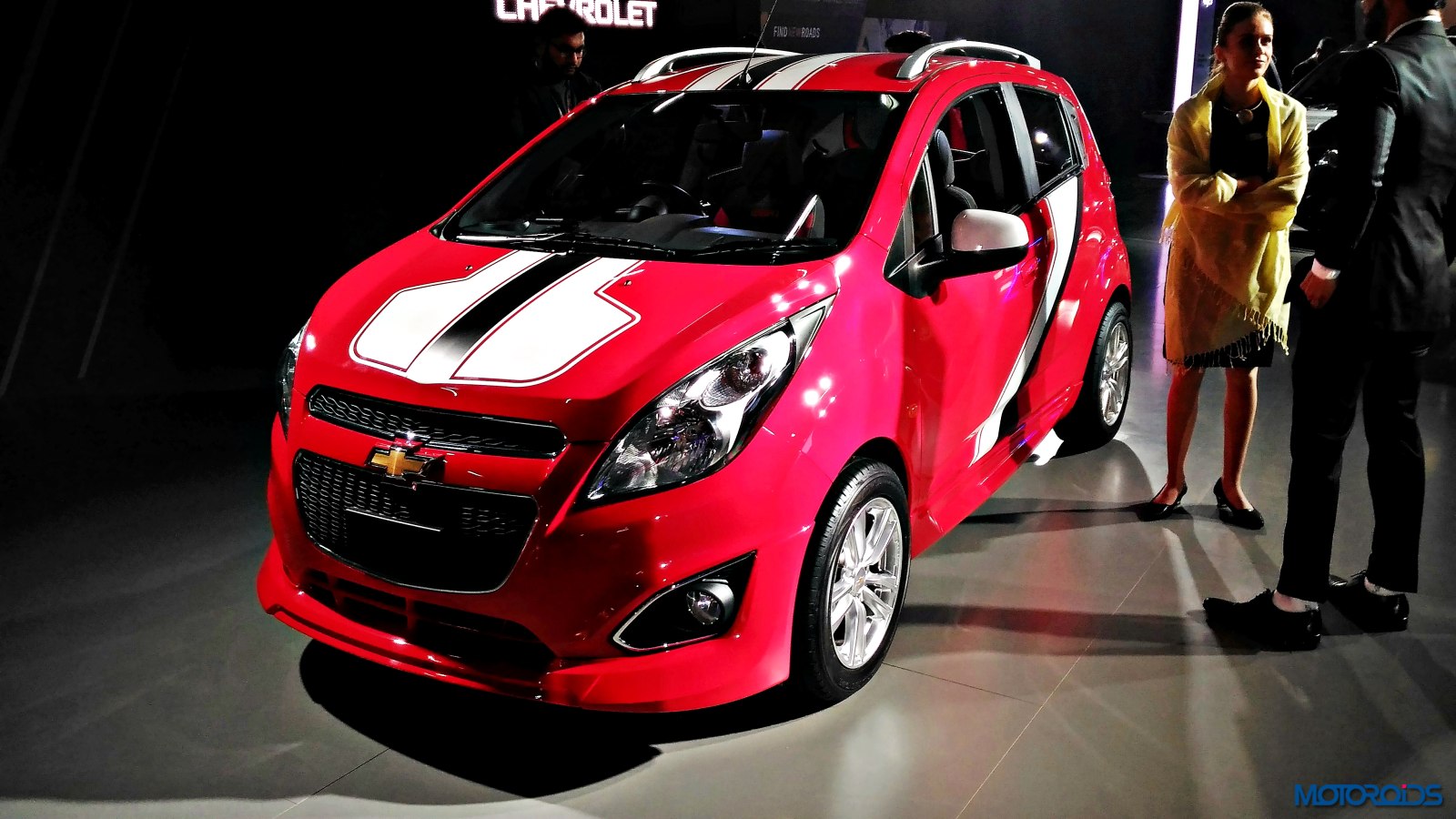 The seats on the special edition Beat are extremely well bolstered, and are wrapped in a black, textured material with red highlights on the sides. The pedals are stainless steel units, with rubber studs and the floor mat too gets a red border. Check out the Auto Expo 2016 special edition Beat in the images below. 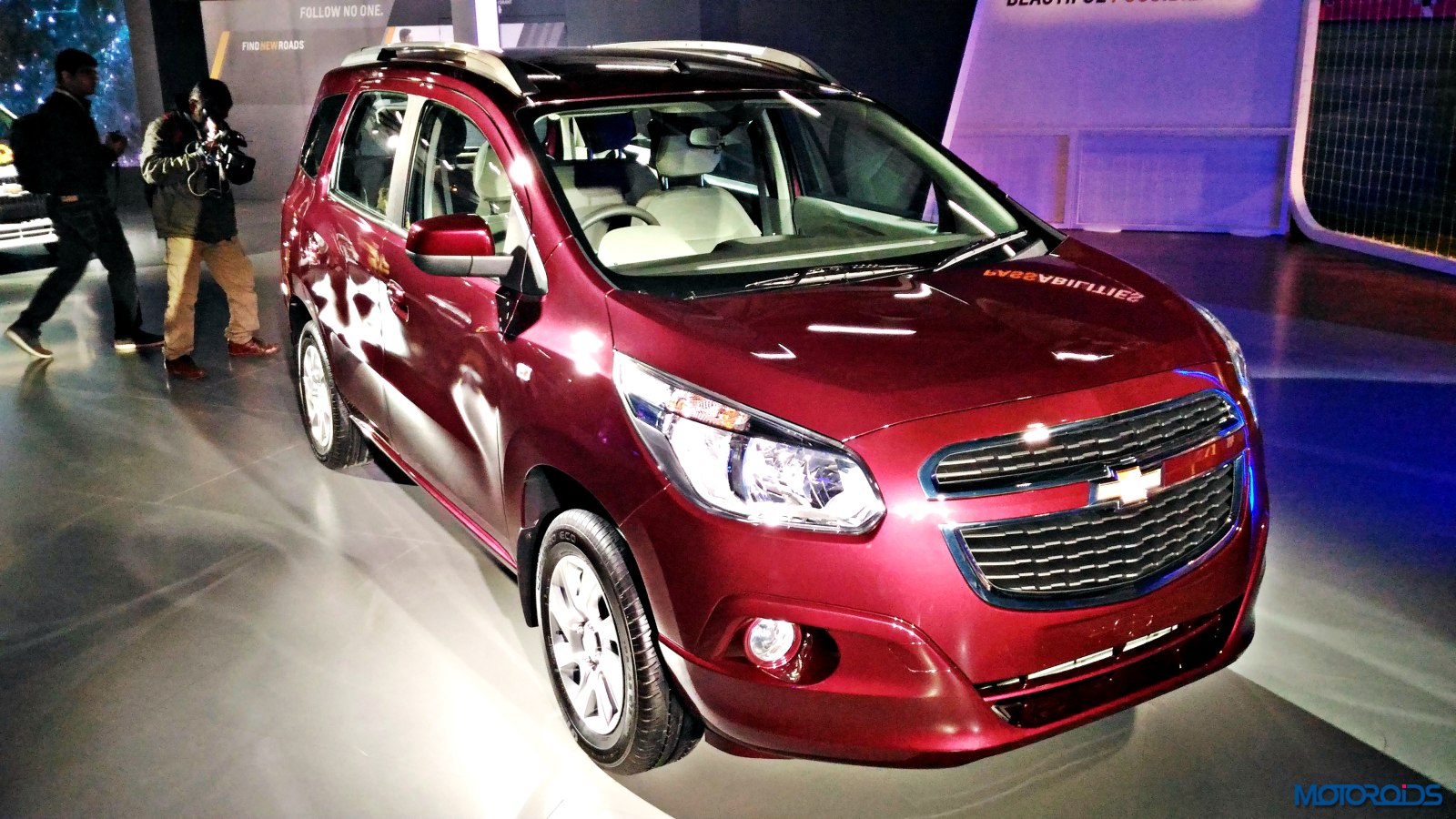 Making its India show debut at the Chevrolet pavilion was also the Spin MPV. The people mover is expected to take the fight to the likes of the Ertiga and Mobilio with its spacious interior. The car is expected to be launched in India in 2017, and is expected to be powered by a Fiat sourced 1.3-litre turbo diesel with 90PS of power and mated to a 5-speed manual transmission. Here are a few images of the Spin MPV at the 2016 Auto Expo 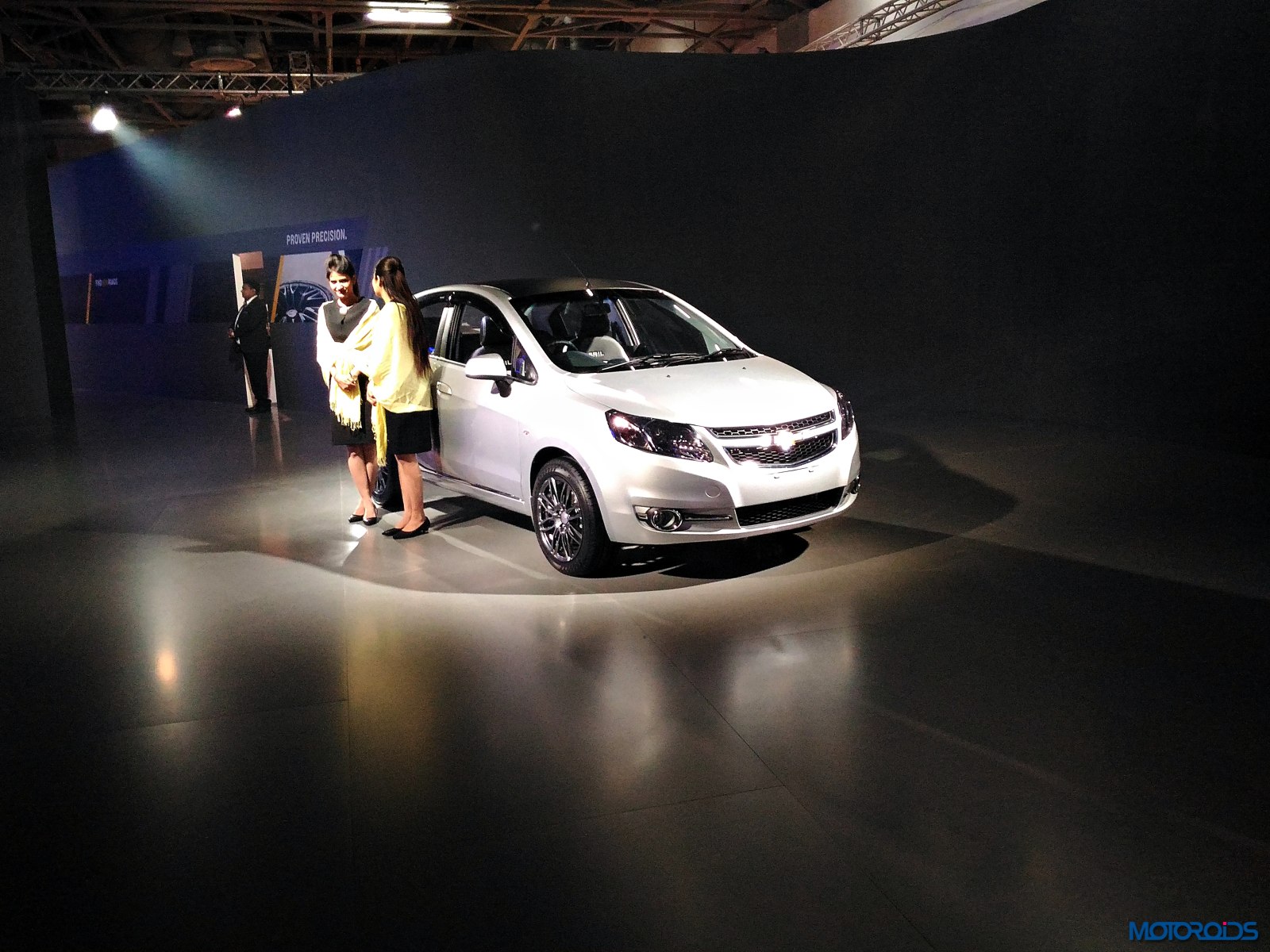 The humble Chevrolet SAIL sedan also got its own special edition at the 2016 Auto Expo. The most apparent change over stock model on the special version is its pair of darker, smoked out headlamps. On the sides, the car gets larger alloys in a new 8×2 spoke design. Weather deflectors above the windows, finished in glossy black are also visible in profile. A generous dose of chrome has been provided to the special edition to make it stand out, and the shiny material is visible all around the car, surrounding the fog lamps, on the grille, below the door sills, and even on the tail-lamps and boot.

Inside the cabin, the SAIL special edition gets a two-tone dark grey and white treatment on the dash with brown faux wood treatment on the centre console, gear lever panel and door panels. The seats are upholstered in a three tone brown-black-white scheme and get SAIL badging on the backrest. The seats also get a contrasting white stitch pattern to add a hint of sportiness along with steel pedals with rubber studs. 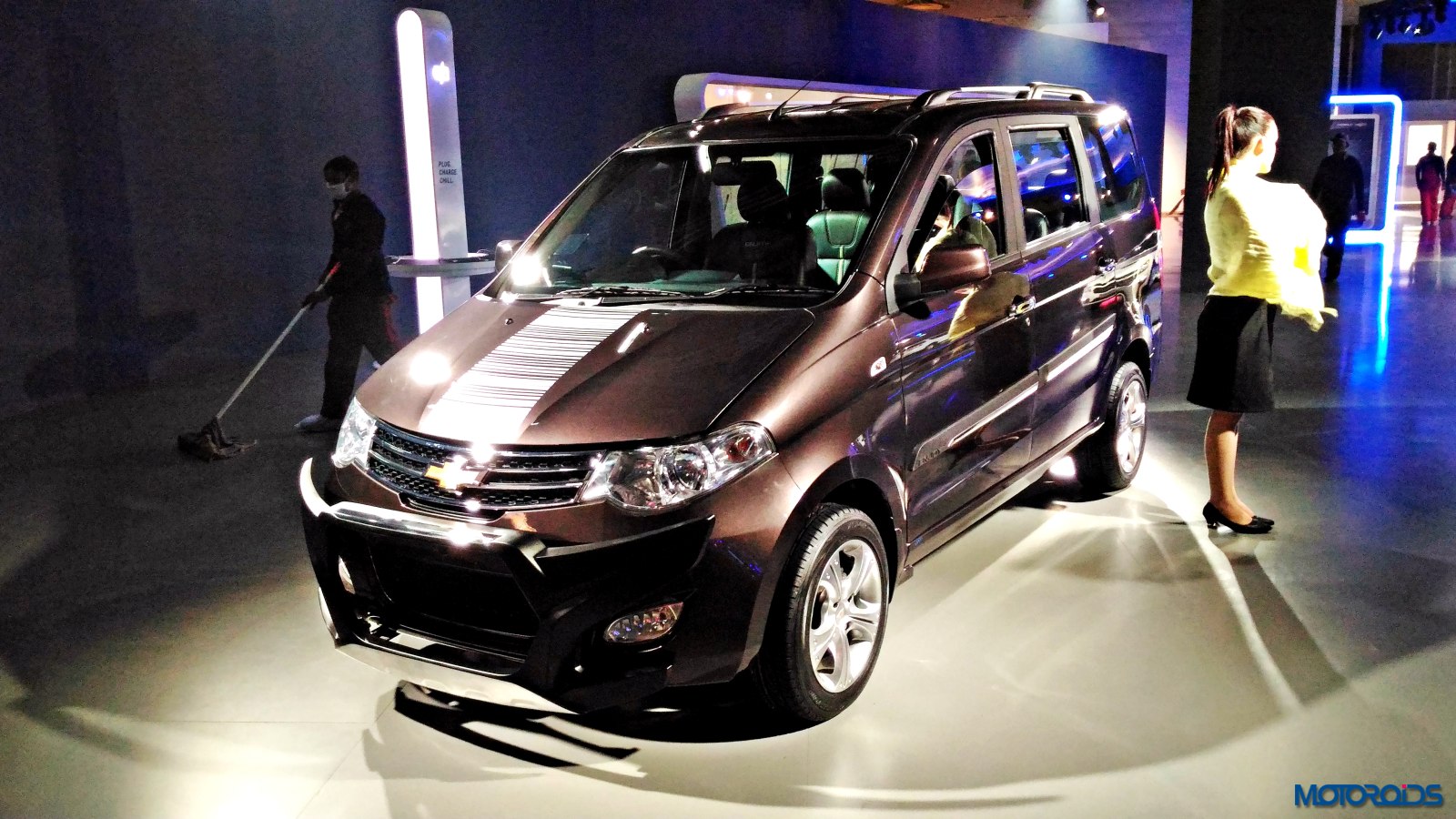 Finally there was the Chevrolet Enjoy special edition. The exterior of the modified Enjoy includes an aggressive bumper mounted bull-bar with a wing-like extension and sporty white graphics running through the bonnet. On the sides, the greenhouse area is clad in black plastic, while the wheels get a fresh new 5 spoke design. The roof rail has also been altered for a sportier, more outdoorsy appearance. The rear bumper gets modified to mimic the treatment at the front end. 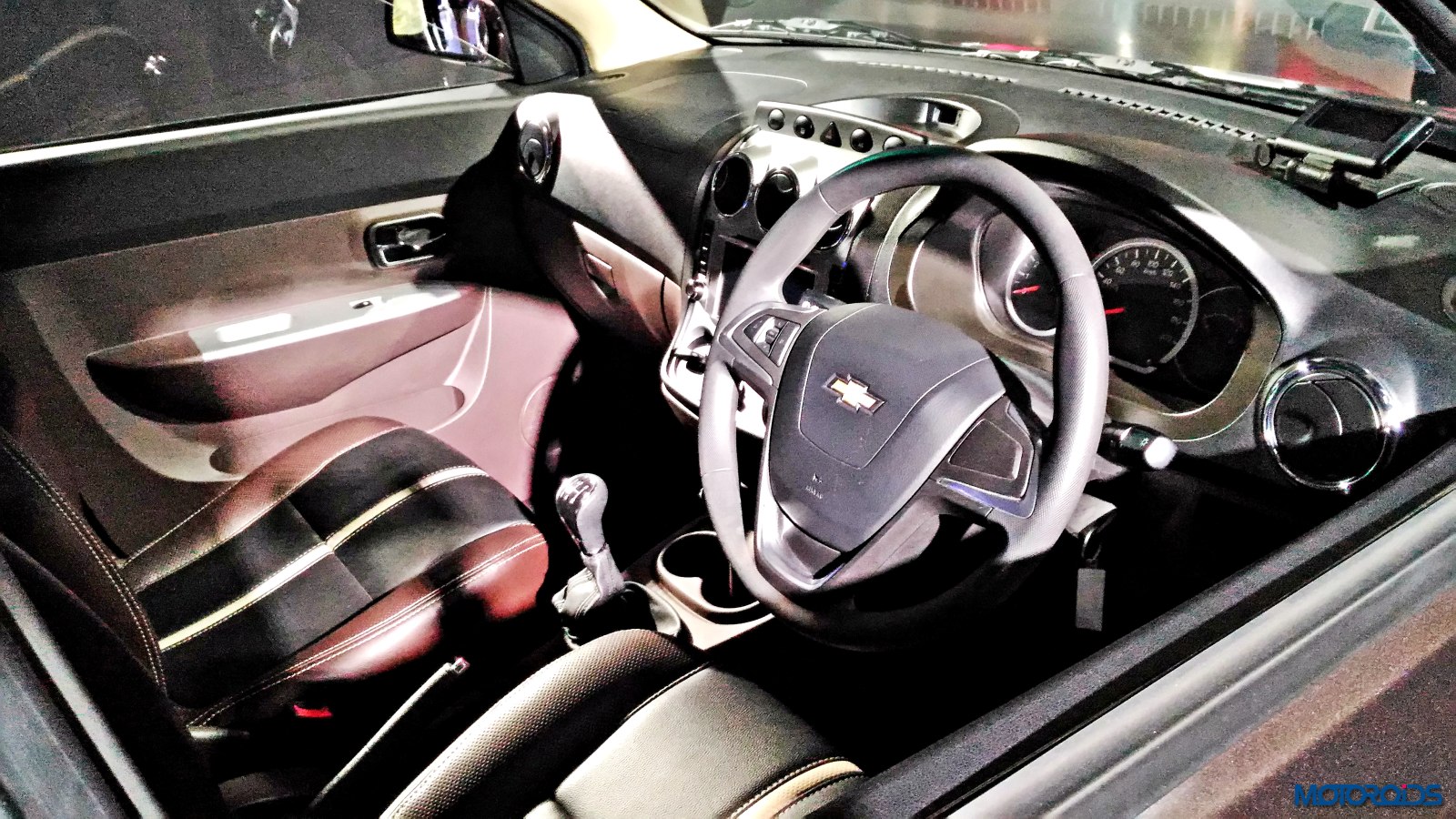 On the inside, the Enjoy special edition gets a three tone, brown-black-white treatment. The dashboard gets a newly incorporated design for buttons above the centre console. This new array of buttons includes controls for HUD (head-up display). Check out the Enjoy Special edition in the images below.