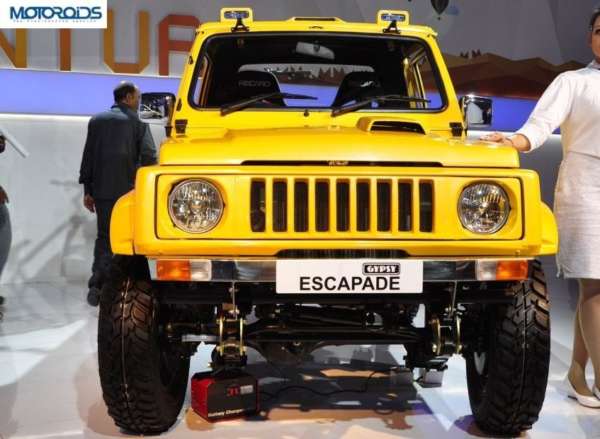 We are reporting LIVE from  Auto Expo 2014 and Maruti Suzuki India Ltd has showcases the Gyespy Escapade concept here at the motor show.

The Maruti Suzuki Gypsy enjoys quite a cult status in our country and has been the obvious choice of many off roading enthusiaists. The Gypsy is definitely the proverbial ‘mountain goat’ among the bunch of psuedo off-roaders on sale in the country and the dated but very capable model has ruled the roost with its terrific off-roading prowess. However, on the same time, barring a couple of engine-upgrades, the Gypsy has remained unchanged ever since it has been in the business and defenitely warrants a dose of freshness.

This is exactly where the new Maruti Suzuk Gypsy Escapade comes in. As we said earlier, the Gypsy Escapade has been put on display at the Auto Expo and has been responsible for setting many of us car aficionados excited. The modified vehicle is draped in a bright yellow paint job, boasts of hood scoops and has a pair of auxiliary lamps mounted at the top of the windscreen. The Gypsy Escapade also boasts of a high ground clearance and larger tyres. 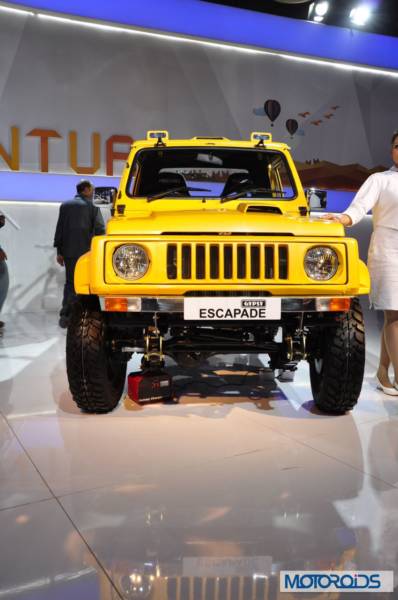 Mechanically though, the Gyspy Escapade remains unchanged. Powering the new Gypsy model is the same tried and tested 1.3 litre MPFI petrol engine that powers the regular model. This motor has a max power of 80 bhp and peak torque of 103 Nm .Unlike what was being speculatd, Maruti Suzuki has refrained from bestowing the capable off roader with a diesel engine. Also, the latest gen Jimny is conspicious by its abesence at the Expo, thereby hinting that MSIL hasn’t yet made up its mind to bring the new model to our shores.

What do you have to say about the new Maruti Suzuki Gypsy Escapade? Has Maruti been successful in bestowing this decade old model with some sense of freshness? Do share your views by penning them down in the comments section below.