We are reporting LIVE from  Auto Expo 2014 and Datsun gives hints of possible way ahead with Datsun redi-GO concept. Here are some of the details and images from the launch.

Datsun’s possible future is revealed by a dramatic new concept being given its world premier at the 12th Delhi Auto Expo 2014 – the Datsun redi-GO concept.  It expresses the excitement of “ready to go” before people start their days journey. 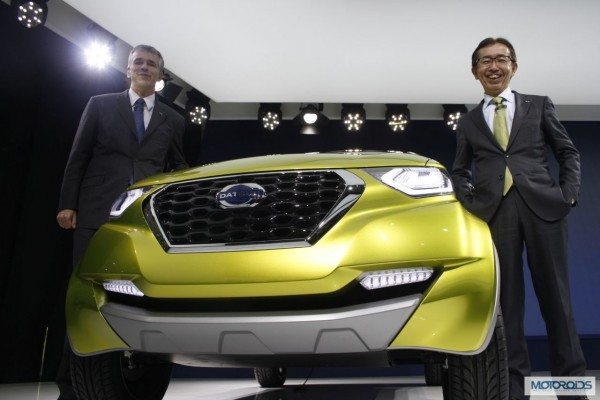 Shiro Nakamura, SVP and Chief Creative Officer, said: “Although Datsun redi-GO Concept is just that – a concept – it shows clearly the way we are thinking. It’s an ambitious styling exploration but, being a Datsun, it is a logical design, too”

The raised body and large wheel arches offer greater ground clearance allowing the car to cope better with challenging road surfaces, while the commanding driving position gives drivers an enhanced – and therefore safer – view over the traffic ahead.

Although the concept remains a styling study at this stage, were it to be put into production it would be priced to target established compact hatchbacks delivering a compelling mix of modernity, quality and innovation.