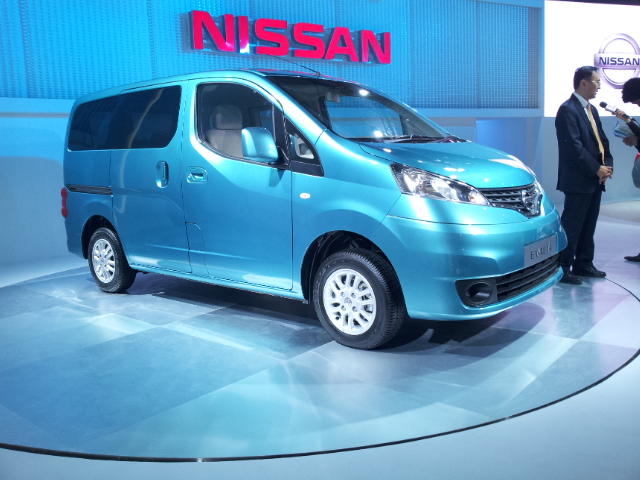 Nissan at the 2012 Auto Expo unveiled it NV200 MPV for India, and christened it the Evalia for the Indian market. The company also has the Leaf EV, along with the demonic GT-R, the 37o Z and its regular Indian lineup at its stall. Another attraction is the Nismo Compact Sport concept. Here he have the images of all the Nissan products on display.. more images and details to follow shortly. In the meantime, here is the official press release

WELCOME TO THE WORLD OF NISSAN

• Nissan is one of the biggest car companies in the world

• A true global player, it has 31 production sites in 16 countries worldwide, and…

• … offers products and services in more than 160 countries

• Its newest manufacturing facility is in India

• And India is one of its fastest growing markets

DELHI (5 January, 2012) — Booming sales, a top award for Quality and an innovative new segment-busting family vehicle to be built at Chennai… Nissan is making waves in India.

Appearing at the Delhi Auto Expo for the first time, Nissan has chosen this significant event to launch a brand new vehicle, built in India for India.

The Nissan Evalia, an award-winning seven-seater family car, is the first Urban-Class Utility Vehicle. Innovative and exciting, Evalia boasts best in class fuel economy, a truly versatile interior with multi-use functionality and a host of sophisticated features such as Rear View Camera and Intelligent Key.

When sales start later in the year, Evalia will add a new dimension to Nissan’s range in India, joining the locally built Micra and Sunny models and the imported X-TRAIL SUV, exciting 370Z sports car and Teana premium sedan. Its arrival marks the start of not only a new segment for the Indian market but also a new phase in Nissan’s presence in the country.

A comparative newcomer to India, Nissan’s sales have exploded over the past two years. From selling around 13,000 units in FY2010, Nissan is aiming to almost triple that to around 40,000 in 2011.

The biggest seller in the country so far is the Indian-built Micra, a little car that has established ‘Made in India’ as a byword for quality. The internationally respected JD Power organization recently ranked Micra first in the premium compact segment for customer satisfaction.

Nissan is also rapidly building its dealer presence in the country. Currently there are 50 outlets established, covering around 70% of the country, but that figure will more than double by the end of next year, with 110 dealers giving 85% market coverage. The target is for 150 outlets by 2015.

“Our progress in India has been exceptional. An impressive rise in sales, award-winning quality from locally-built products, and an expanding range of innovative cars from a growing dealer network underlines the strategic importance of India to Nissan’s future growth plans,” said Gilles Normand, Corporate Vice-President, Nissan Motor Co. Ltd.

“Indeed, such is the global demand for products built here in India, that we have brought forward plans to open a second production line at our state-of-the-art Oragadam plant near Chennai. The second line will open in March, well ahead of schedule, which will ultimately create an extra 1,500 jobs at the plant – further proof of our commitment to the country.”

As well as the full range of Nissan models on sale in India, the company has taken the unusual step of showing a number of products that aren’t on sale here. But the idea behind displaying the potent Nissan GT-R, multi-award winning zero-emission electric Nissan LEAF and the one-off Compact Sports Concept (CSC) is to underline the key elements of innovation and excitement that’s infused into the DNA of every Nissan car, light commercial and truck produced and sold globally.

CSC is an idea for the future, a look at how a small sporting three hatchback might look. Even though it has obvious links to the Nissan Micra, CSC is officially no more than a concept, designed to engage with younger customers in emerging markets such as India.

Two cars most firmly in production, though, are LEAF and GT-R. They might be complete opposites in terms of performance and appeal but both carry equal amounts of the Nissan DNA.

GT-R has an advanced four-wheel chassis, almost 500bhp from its twin-turbo 3.8-litre V6 engine and is the fastest production car around the famed Nurburgring race circuit in Germany.

LEAF’s performance figures are equally as startling in their own way. The family sedan performs against the clock as well as – and in some cases, better than – its conventional rivals, but with a battery-powered electric engine under the bonnet, there are no tail pipe emissions whatsoever.

“We want to show India the depth of Nissan’s global offering. Although neither LEAF nor GT-R is currently available in the country, we feel the chance to see two of the most remarkable cars on sale anywhere in the world is something visitors will not want to miss,” said Normand

“As to whether LEAF and/or GT-R will ever be sold in India all I can say is that we are constantly evaluating and re-evaluating marketing plans. What I can confirm is that we are committed to launching a growing range of innovative and exciting models in India over the coming months and years – there is a lot more to come from Nissan.” 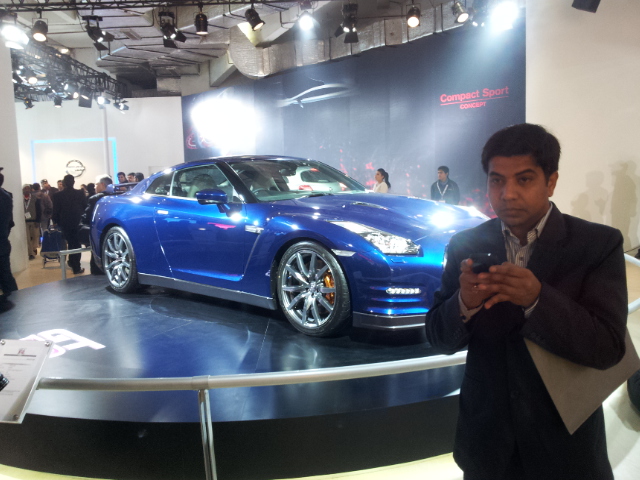