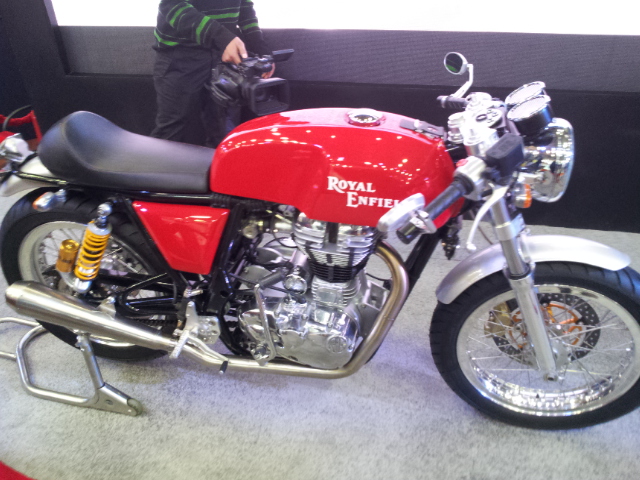 RE launches Thunderbird 500, introduces line of motorcycle gear and accessories.

Highway cruising gets a new definition with the launch of the Royal Enfield Thunderbird 500 today. Perhaps one of the most anticipated models from the Royal Enfield stable, Thunderbird 500 is poised to enhance the pleasure of leisure motorcycling amongst the touring enthusiasts. Combining distinctive “black” styling with a powerful 500cc Unit Construction Engine and a 27.2 bhp power output being fed through an electronic fuel injection system- the Thunderbird 500 makes a distinct statement on the Indian roads.

The visual appeal of the Thunderbird 500 is marked by the ‘black’ engine, the first of the several styling elements that characterize the motorcycle. The seat has been completely redesigned to suit the new foot pegs position. It now opens using a lock mechanism, accessible through the side panel. True to its design concept as a more “touring friendly” motorcycle, the separately mounted pillion seat can be removed to accommodate luggage. The handle bar too has received changes for better reach and ergonomics.  The pillion grab rail is an all new pressure die cast component and lends to the modern design of the motorcycle. Bungee hooks provide the much needed bungee points to tie luggage. Other small styling elements that a keen enthusiast will notice include the Royal Enfield logo on the all new foot-pegs, new design mirrors and the LED tail lamp.

The redesigned front end with its 41mm thick forks greatly improves handling besides adding to the muscularity of the Thunderbird 500. The instrumentation also includes two digital trip meters, allowing riders to keep a track of total trip mileage as well as intermediate mileage between tankfulls. The speed and engine rpm are shown via tastefully designed analogue clocks, housed in all new twin pods at the front. The main ignition lock also functions as a central steering lock. The inclusion of hazard lamps in the switch gear is a first for a motorcycle manufactured in India.

The new headlight with a 55W projector lamp for its low beam and a 55W halogen bulb for the high beam, addresses the biggest challenge of night time visibility faced by most motorcyclists while cruising on the highway. The lighting is at its brightest with the high beam on, working in combination with the projector lamp giving ample spread and penetration on the road. The high rise handlebars, forward placed foot-pegs and a low seat height enable a rider to cover distances comfortably for longer periods of time. Add to this, the large 20L fuel tank that does away with the need to stop frequently for fuel- highway cruising will no longer be the same! The tank cap is placed asymmetrically on the top right hand side of the tank, instead of the conventional central mounting; another distinctive styling element of the Thunderbird 500.

To complete the package, stopping power has been aided with the addition of a disc brake at the rear. The braking system is supplied by Bybre, a fully owned subsidiary of Brembo. It is mounted on the new improved oval section swing arm.

Royal Enfield also previewed a range of well crafted, meticulously detailed, purpose built motorcycle gear at the Auto Expo. Designed and developed indigenously, the Royal Enfield accessories both add flair and enhance the riding experience. On display is the inaugural “BLACK” range of merchandise, celebrating the launch of the Thunderbird 500. The collection includes biker apparel, bike and riding accessories.

The highlights include  flagship leather riding jackets with design details that take into account not just the rider’s comfort but also safety with CE approved impact absorption protectors that pass the stringent European norms of EN1621. In addition, there is ample usage of 3M Scotchlite reflective piping and branding at the back with Schoeller reflective for high visibility during night rides. The all weather high density nylon riding jacket with breathable and waterproof membrane provides rain proofing, while the removable thermal lining takes care of cold weather riding and nylon mesh on the outer shell keeps the rider cool during summer rides. Similar features are also on the riding pants with hip protectors adding to the rider’s safety. Also showcased are CE approved Modular eye wear with ‘anti fog’ treatment and 100% genuine UV protection and many added features for riding, in association with NANNINI from Italy, original Buff multipurpose headwear with safety reflectors from Spain, motorcycle utility luggage system with interlocking mechanism, back packs with EVA high density back support and state of the art air bag cushioning for the first time in India.