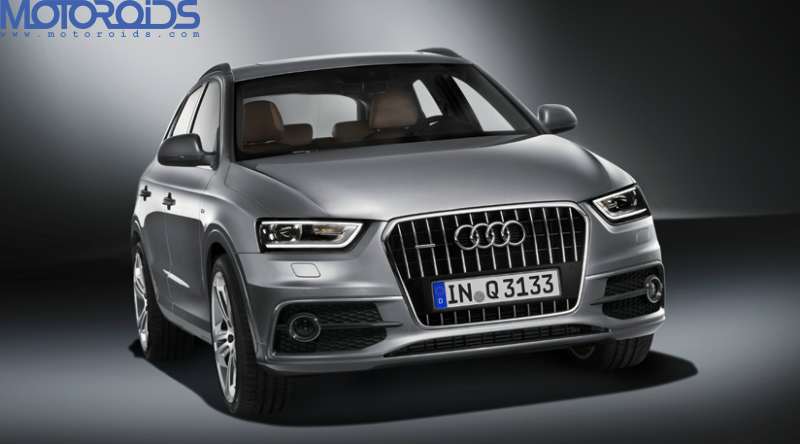 Audi has started production of their much awaited mini-SUV, the double downsized version of their flagship SUV Q7 – The ‘Q3’. The  Q7 has been a real star for Audi in the international as well as Indian market. The Q3 will boost the company’s presence in the SUV market by offering a genuine alternative to the BMW X1. It’s good to see Audi with so many SUVs in its line-up, as there was a time when they were without a SUV in their line up apart from the A6 Allroad Quattaro which essentially was a sedan with all wheel drive.

The Q3 will be produced in Spain at the plant in Martorell. Audi which has a sister company named Seat will assist Audi in making the Q3 at their plant in Spain. Within a years’ time we will have 100,000 Audi Q3’s down the road and the numbers will keep on rolling.

Martorell/Ingolstadt, June 7, 2011 – The official start of production for the Audi Q3 has begun. Starting today, the compact SUV with the four rings will be built at the SEAT factory in Martorell, located in Spain’s Catalonia region. Approximately 100,000 Q3 units are slated to leave the three-shift assembly line each year. Audi and SEAT together have invested around €330 million in infrastructure and ultra-modern production facilities.

“The Audi Q3 production is an example of how we are making use of synergies within the Group,” stresses Frank Dreves, Board Member for Production at AUDI AG. “The Martorell factory is an extremely productive facility with a highly skilled workforce, and one that meets the exacting quality standards of our brand. The Q3 definitely gets the Audi seal of approval.”

The decision to build the Audi Q3 in Spain signals the Ingolstadt-based carmaker’s intention to continue its dynamic course of growth while also pursuing a strategy of internationalization. In choosing Martorell as the new production site, Audi is also taking on an important social responsibility, for both the region and the workforce. The Company provides approximately 1,500 jobs at the plant, including 700 newly created positions. Special emphasis was placed on training the workforce. All staff have completed a nearly 180-hour program designed specifically for the Q3 to prepare them for the challenges they will be faced with on the production line.

The Company has created the optimum conditions for the latest offspring in its broad product line-up: A new body shop featuring 450 state-of-the-art robots was erected especially for the Q3 on a site measuring 30,000 square meters (322,917 sq. ft). In use for the first time at the body shop is the so-called “roof bell,” an innovative development from the Audi Toolmaking Shop in Ingolstadt. A robot grabs the roof and aligns it precisely while a second robot has the roof bell ready for the following roof of the next body.

Thanks to its systematic lightweight design, the basic version of the Audi Q3 weighs less than 1,500 kilograms (3,306.93 lb). Its engine hood and the wrap-around hatchback with integrated tail lights are made of aluminum. A number of ultra-high-strength steels are employed in the rigid, safe passenger cell.

“A big thank you to all the employees who have been involved in the Q3 project over the past years,” says SEAT Board Member for Production Wolfram Thomas. “The new model is another example of the trust that the Volkswagen Group and AUDI AG in particular have placed in SEAT. The Q3 represents the excellent preparation and premium-carmaking skills of SEAT employees,” Thomas stresses.

A small, sporty SUV, the Audi Q3 will join the other members of the Q family, the Audi Q5 and the Audi Q7. The five-door Q3 with its dynamic, coupe-like styling offers genuine SUV traits in terms of seating position, wheel size and ground clearance, and stands out on account of the extremely sporty driving experience it provides. The Q3 combines the design and dynamics of a compact car with the roominess and versatility of an SUV. The range of driver assistance systems brings a new dimension to the compact SUV category. The Audi Q3 will launch with three four-cylinder powerplants: one TDI unit and two TFSI engines. Developing between 103 kW (140 hp) and 155 kW (211 hp), they are as powerful as they are efficient.

With the Audi Q3, the brand with the four rings is entering into a new segment. Advance sales for Europe will begin in June. Market launch is scheduled to take place in the fourth quarter of this year. Around 100,000 units are expected to make their way to customers in 2012, the first full production year. In Germany, sales of the Q3 will begin at a base price of €29,900. Plans are in place to build the sporty compact in China, specifically for the local market, in a second phase.

The SEAT factory in Martorell was built in 1993. It employs over 10,000 staff. The Audi Q3 is the first model built in Martorell by the Ingolstadt-based company.