Home Audi Audi A9 Concept teased ahead of LA debut 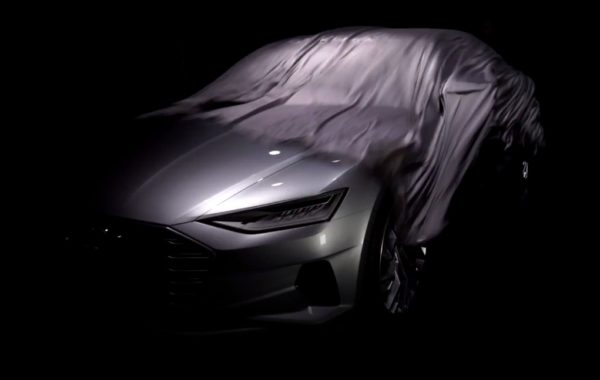 The Audi A9 Concept has been teased by the Ingolstadt based manufacturer, ahead of it’s debut at the LA Auto Show later this month. Details about the concept version of Audi’s upcoming new flagship are obviously being kept under wraps for now, but it is being reported that the A9 will be based on an updated version of Volkswagen’s MLB platform. The electronics and the mechanical bits will be shared with the next generation A8.

Despite being bigger and packed with more technology than the A7, the A9 will weigh even less thanks to heavy doses of carbon fiber and spaceframe construction. In this brief teaser video narrated by Marc Litche, Audi’s new design chief, the A9 Concept shows itself in bits for a couple of times- notice how big the corporate grille has grown, after all it’s a flagship. All will be revealed soon, in about a couple of weeks.
Audi
,
Los Angeles Auto Show
,
News
,
Motoroids Comments
Facebook Comments
Leave a Reply Cancel reply
Popular Stories
Kia Dealership Delivers Ten Carnival MPVs In A Single Day...
300 km range and a top speed of 120 km/h, Battrixx turns the EV game up!...
Video: Nahak Motors unveil high performance electric motorcycles...
Details of the India-bound 2020 Hyundai i20 revealed...
BS6 Hero Passion Pro walkraround video...