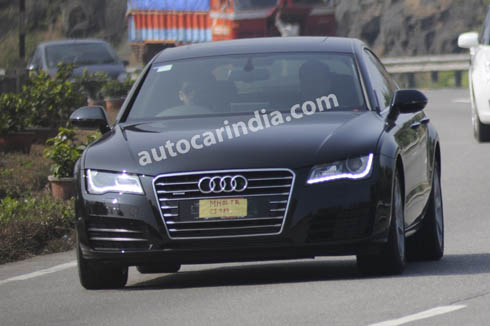 Why don’t the manufacturers understand that if they want to test their cars secretly, they should either stop making the cars this beautiful or get a SECRET place to do the real world test.

Audi was testing their one of the most beautiful cars, the A7 somewhere near Pune and the blokes at Autocar managed to capture the car on their camera sensors. This car has gained a lot of attention since the time it was launched, all thanks to the beautiful design and the eye-catching Fastback styling.

According to them, the car on test seemed to have a diesel powerplant, but Audi will obviously be giving options at the time of its speculative launch in 2011.  Audi plans to position the A7 between their flagship luxury sedan A8 and the premium A6.  The car is bigger than the A6 but slightly smaller than the A8. Though no specs are out, we will let you know once we get any info on it.

Enjoy the pics(courtesy Autocar India) in the gallery below. Make sure your keyboard is spill resistant, ‘coz this car will make you drool.