Home Audi New 2017 Audi A5 and S5 Cabriolet Revealed : Official Images, Details and All You Need to Know

After the Audi A5 coupe and A5 Sportback, the 2017 Audi A5 Cabriolet, which completes the model family has bee revealed. For those who have the pleasure of living in places where they can feel the wind in the hair, and where the sun feels pleasant and not scorching on the skin, this one should make for a fine ride. Also making its debut along with the A5 is the sportier S5 too. We are detailing both the machines in this single post.

The A5 Cabriolet, as the name suggests, comprises a foldable soft top which takes all of 15 seconds to open and 18 seconds to close. You can engage or disengage the roof even while the car is in motion, upto a speed of 50 km/h. 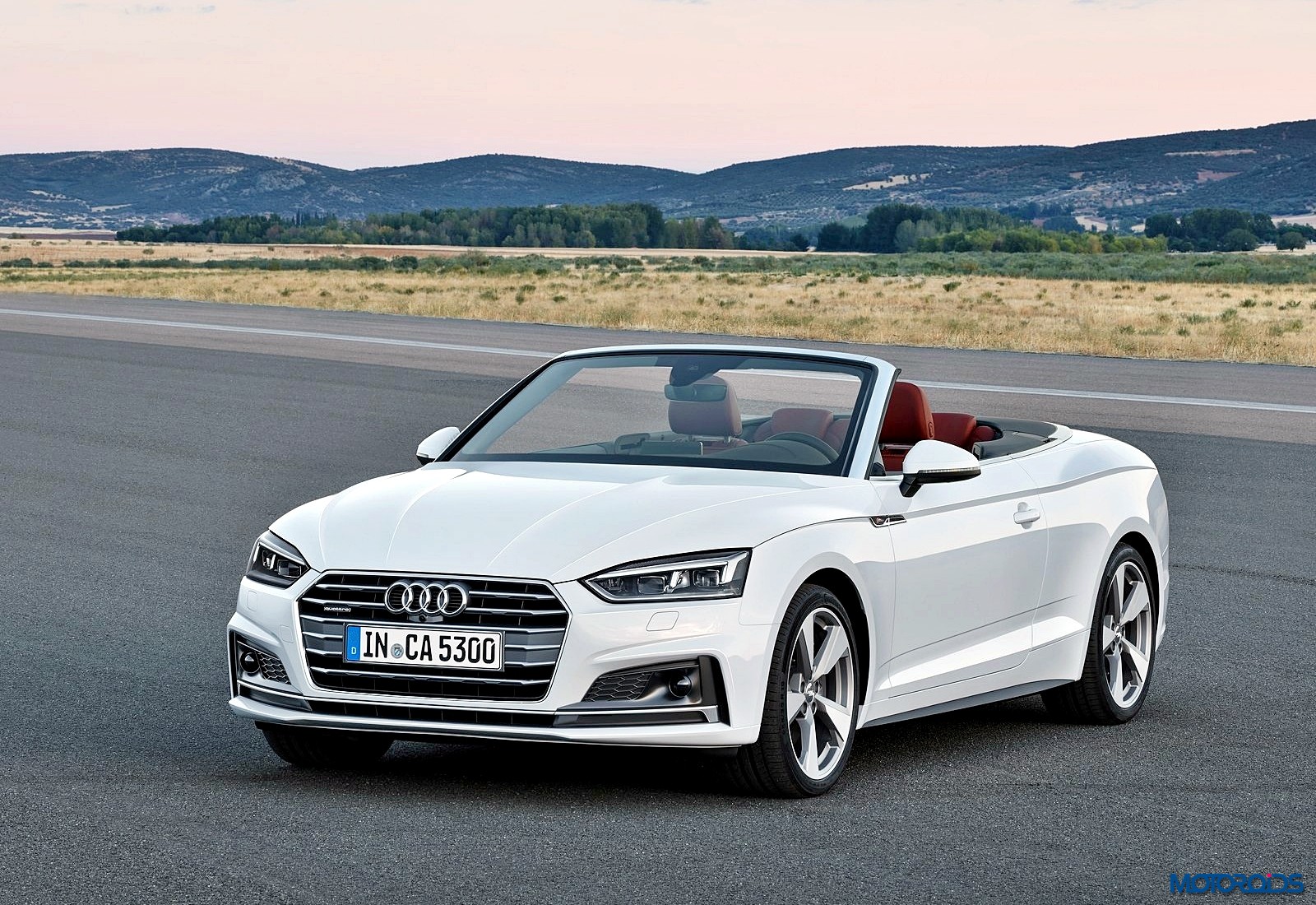 The deficiency in stiffness caused by the removed of the roof has been compensated for by additional struts in the body and stronger sills. Additional passive safety is provided in the form of head-thorax side airbags and automatically extending aluminum profiles in case of a rollover or crash. The Ingolstadt based permium car maker says that the new A5 Cabriolet’s has a 40% stiffer body while it still being lighter by 40 kg.

The new A5 cabriolet follows the lines of the A5 Coupe in most places to keep a clearly identifiable family resemblance. While the front, sides and rear is almost identical to the coupe, the Cabriolet’s unique style element is a third brake light neatly integrated in the hood compartment cover. 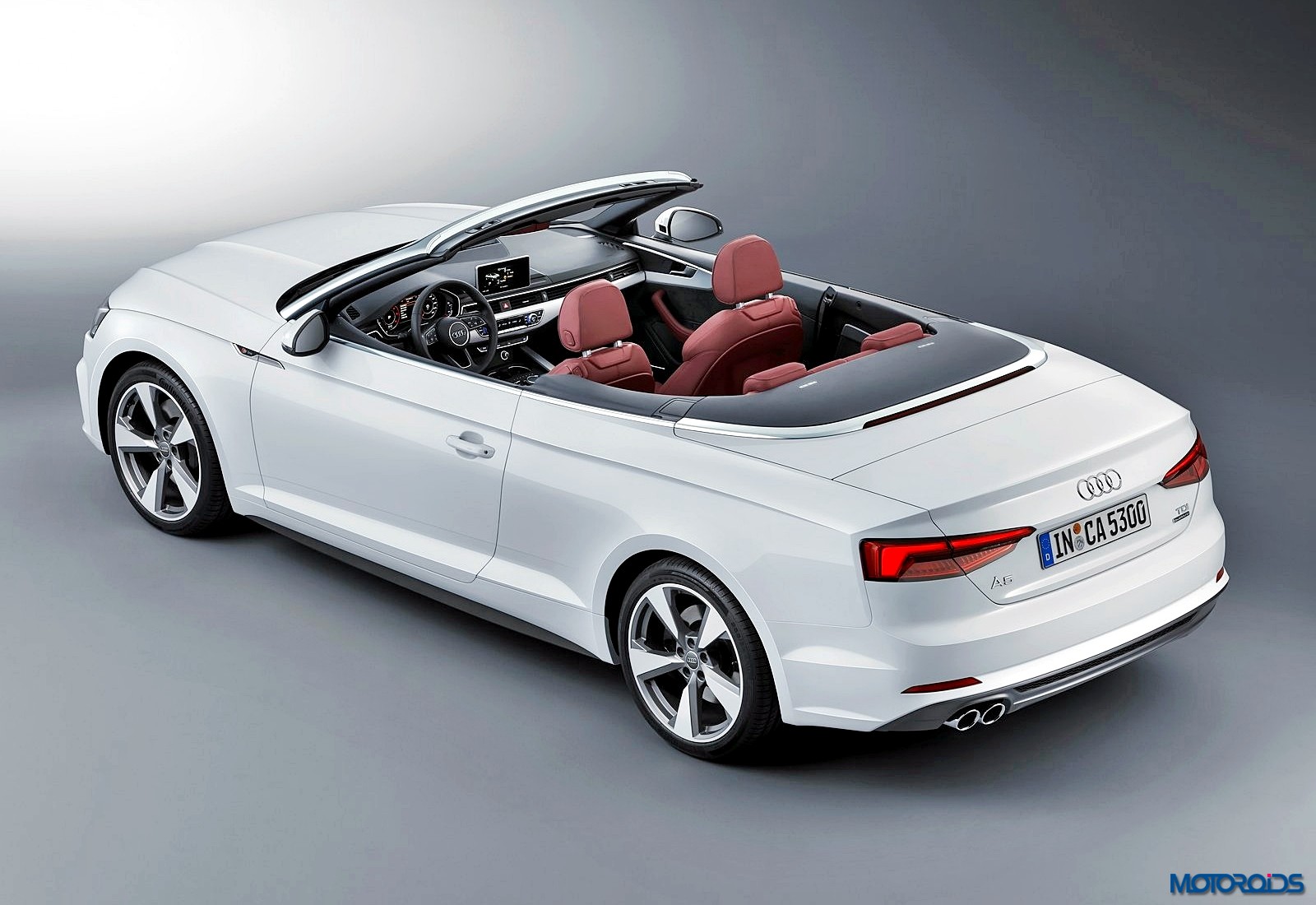 The new A5 Cabriolet is 47 mm longer than its forebear, thanks to a 14 mm longer wheelbase. cabin is roomier too with more knee room at the rear and more and shoulder room up front. Boot capacity is also up by 60 litres and now stands at 380 litres. The rear seats can be folded flat 50:50 with the tailgate being a powered unit, although swinging your leg under the rump to open the boot is still an optional feature. 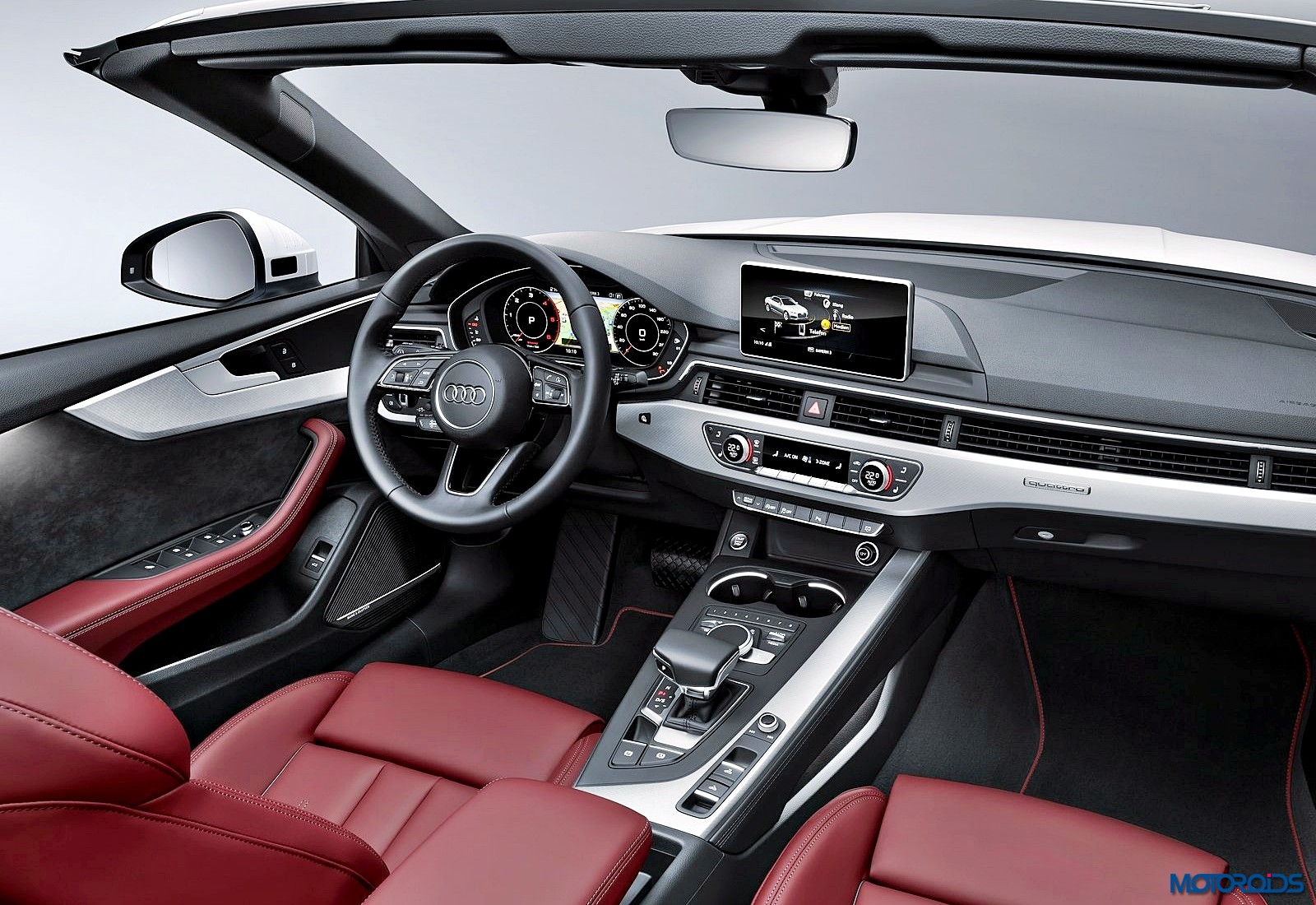 Power will be delivered with three engines – a 2.0 TFSI with 252 hp, a 2.0 TDI with 190 hp and a 3.0 TDI with 218 hp. The engine range will be expanded later with the addition of a 2.0 TFSI with 190 hp and a 3.0 TDI with 286 hp. Transmission duties will be taken care of by a six-speed manual, seven-speed S tronic dual-clutch unit and an eight-speed Tiptronic. Power will be fed to the front wheels with auattro AWD offered as an option in some variants.

As mentioned before, though, the sportier S5 version has also been revealed with the A5 Cabriolet. The performance oriented model is powered by a 3.0 TFSI petrol with 354 hp of power on tap along with a colossal  500 Nm of torque available between 1,370 to 4,500 rpm. All that firepower makes the S5 capable of sprinting from 0-100 km/h in 5.1 seconds. The S5 comes equipped with quattro AWD and eight-speed auto transmission are standard. 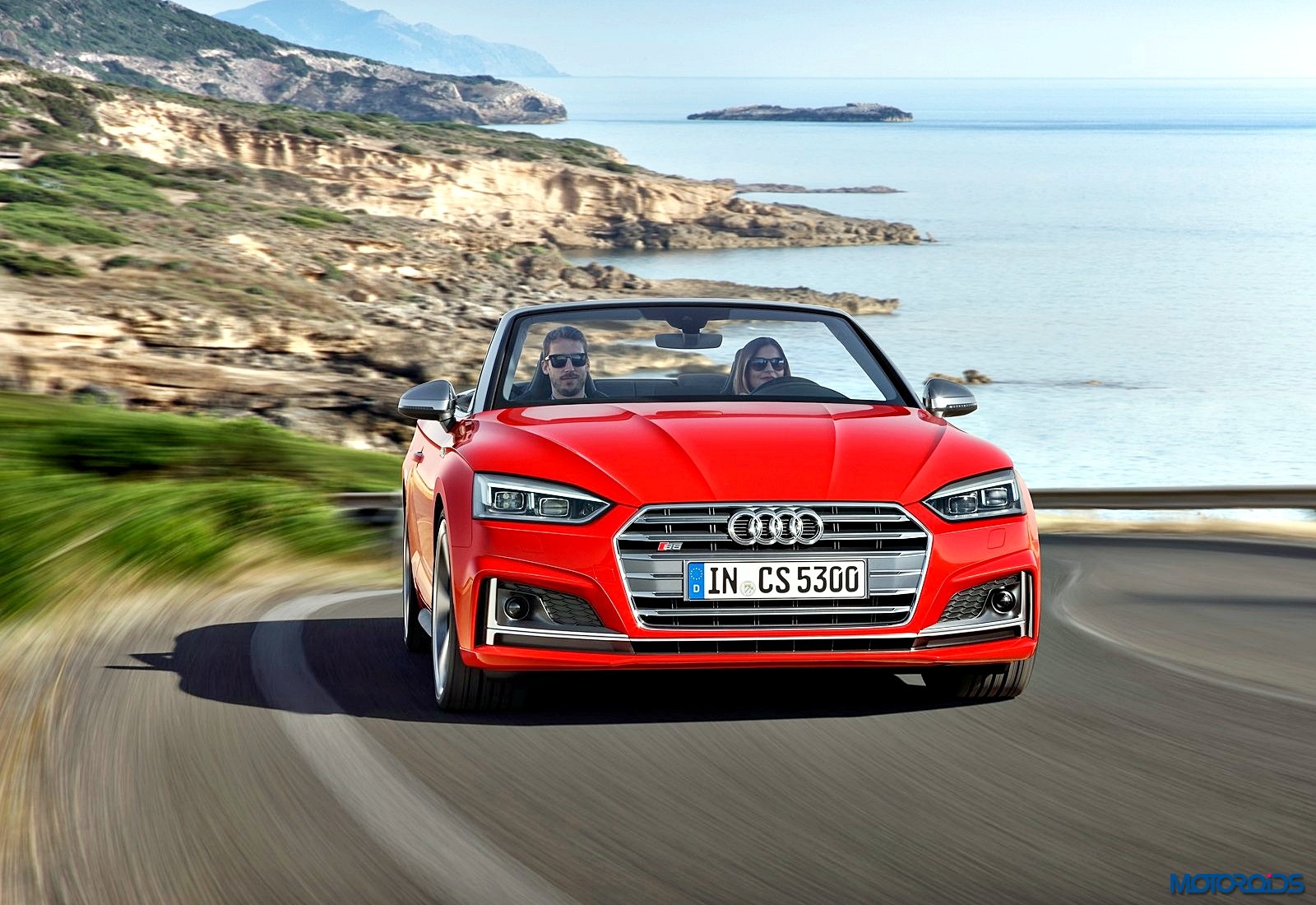 Sportier design elements like a quad exhaust, sportier wheels and diffuser differentiate this more powerful car from the A5. 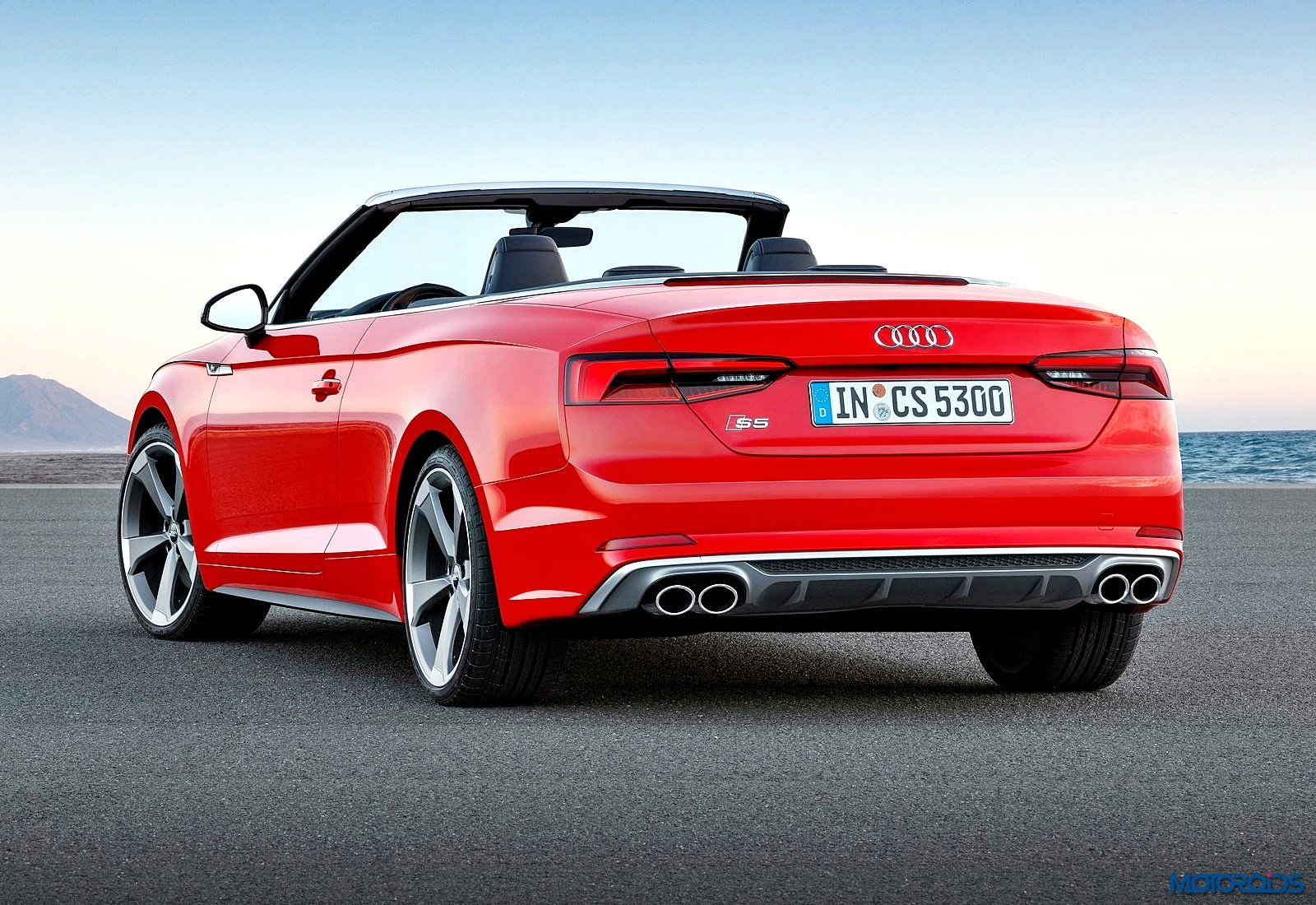 Check out a detailed image gallery of the Audi A5 and the S5 Cabriolet below (click on thumbnails to expand).