The Volvo S90 has come to India. And what a way to arrive. We have been in awe of the looks of the S90 since the very first time we saw it in pictures. We got to drive this luxo barge from Sweden in the beautiful city of Jodhpur on a brilliant, sunny day. We won’t keep you waiting and let you know at the very outset that we are mighty impressed with this machine. Here is what made us fall in love with this Swedish lass, though. 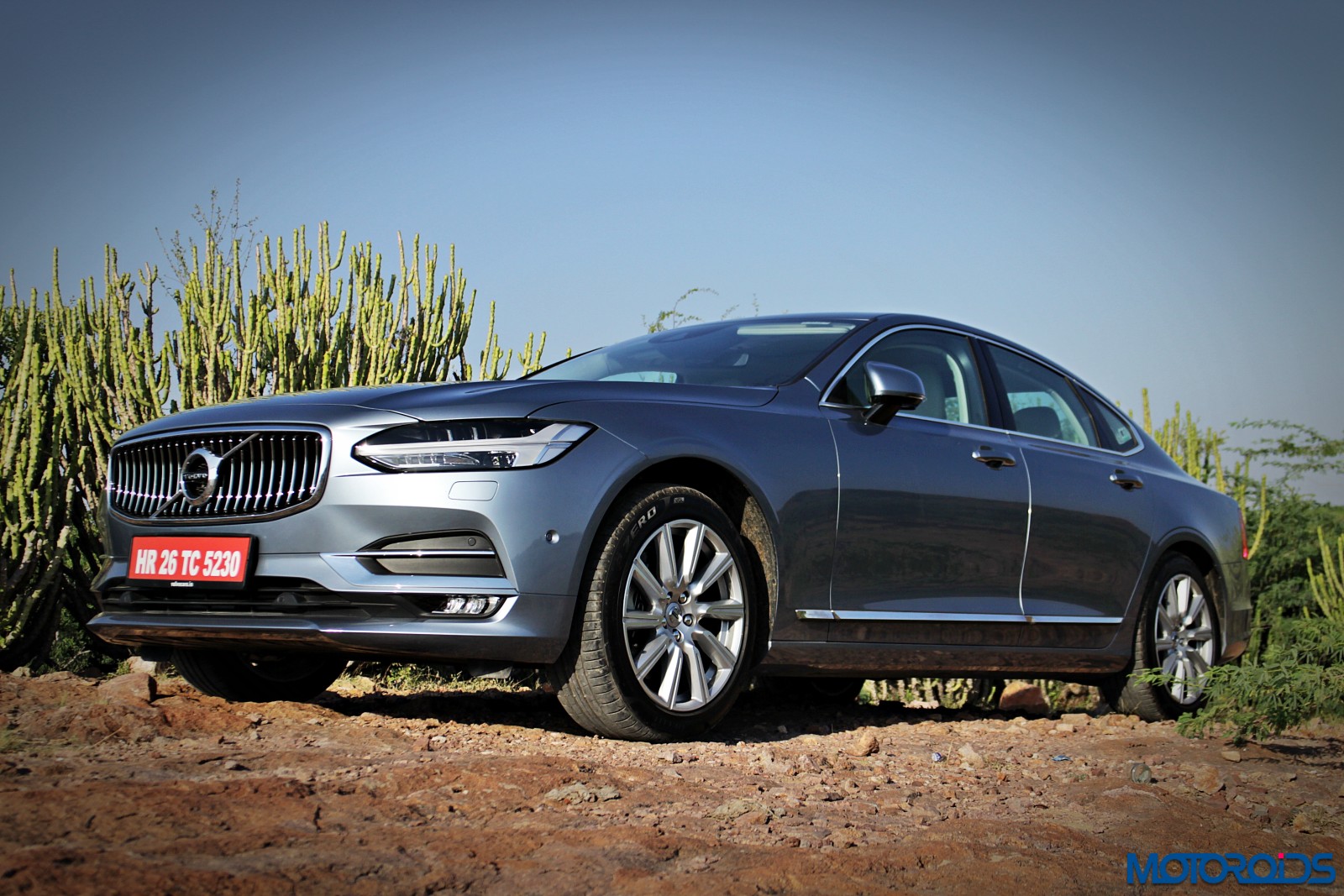 Volvos are known primarily for their safety and utility. Until recently the cars from the Scandinavian manufacturer wouldn’t quite have won any beauty pageants. Of late, though, the designers at Volvo seem to have decided to take a much more youthful and flamboyant approach. Back in 2013, Volvo revealed a tastefully sculpted concept car – the Concept Coupe. It was designed by Volvo’s new Vice President of design Thomas Ingenlath and Robin Page. And the dentists made a killing because everyone’s jaws dropped looking at the concept. 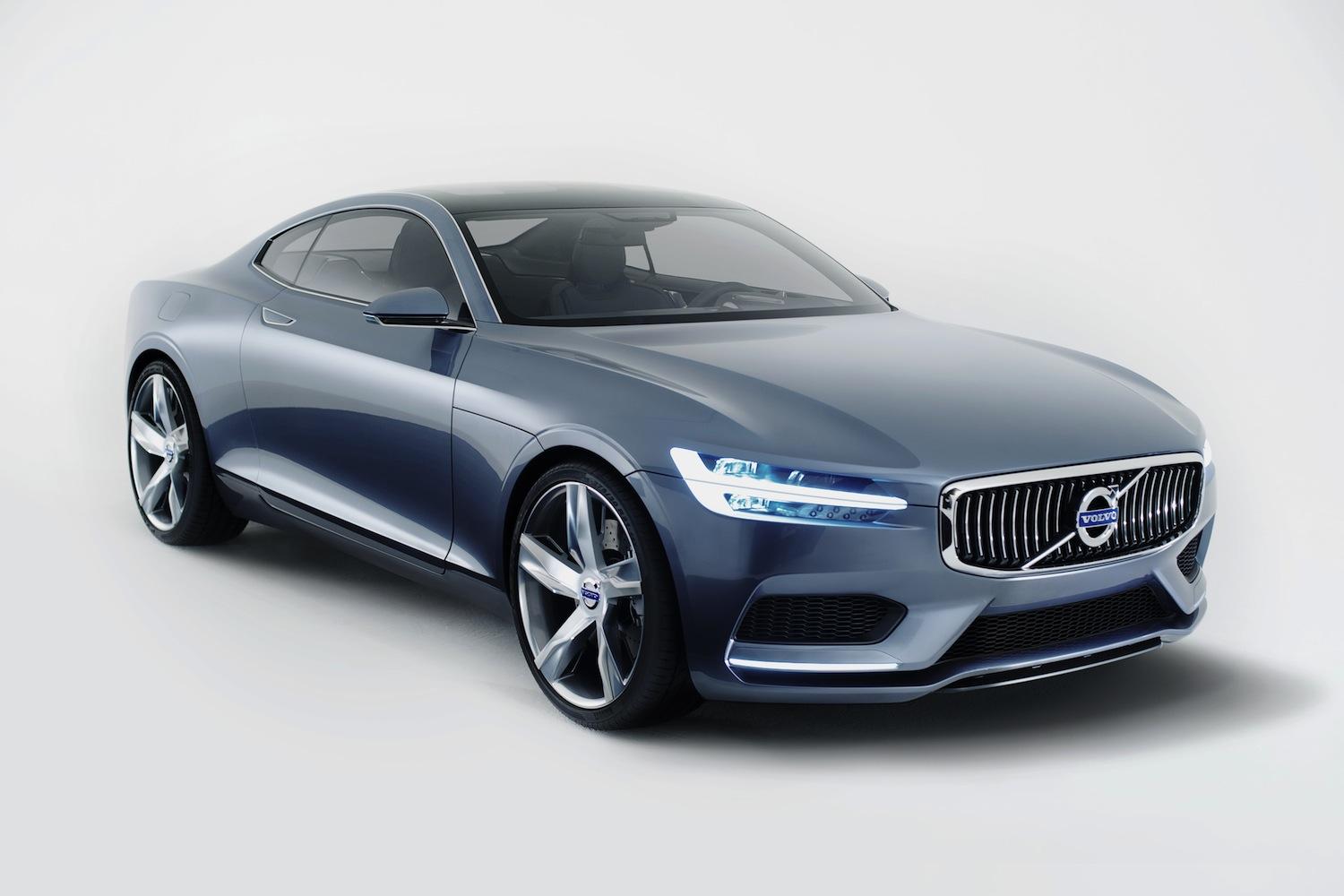 Thankfully, unlike other concept cars which lose their charm on their way to the assembly line, the production version of the Concept Coupe maintained almost all of the design cues. The S90 retains the supermodel looks of its concept and looks every bit like the four door version of the stylish coupe.

The Volvo S90 has an all-new, sleek and sensuous design which makes a visual impact right from its headlamps all the way to the C-Shaped tail lamps. Headlights on the new S90 are one of the prettiest and most gorgeous units you’d find anywhere in the automotive world. Seen before on the XC90 and inspired by Thor’s Hammer they lend the S90 a properly distinctive face. The hammerhead graces the sides, with the ‘handle’ running towards the inside, while also dividing the headlight horizontally into two beautiful clusters. 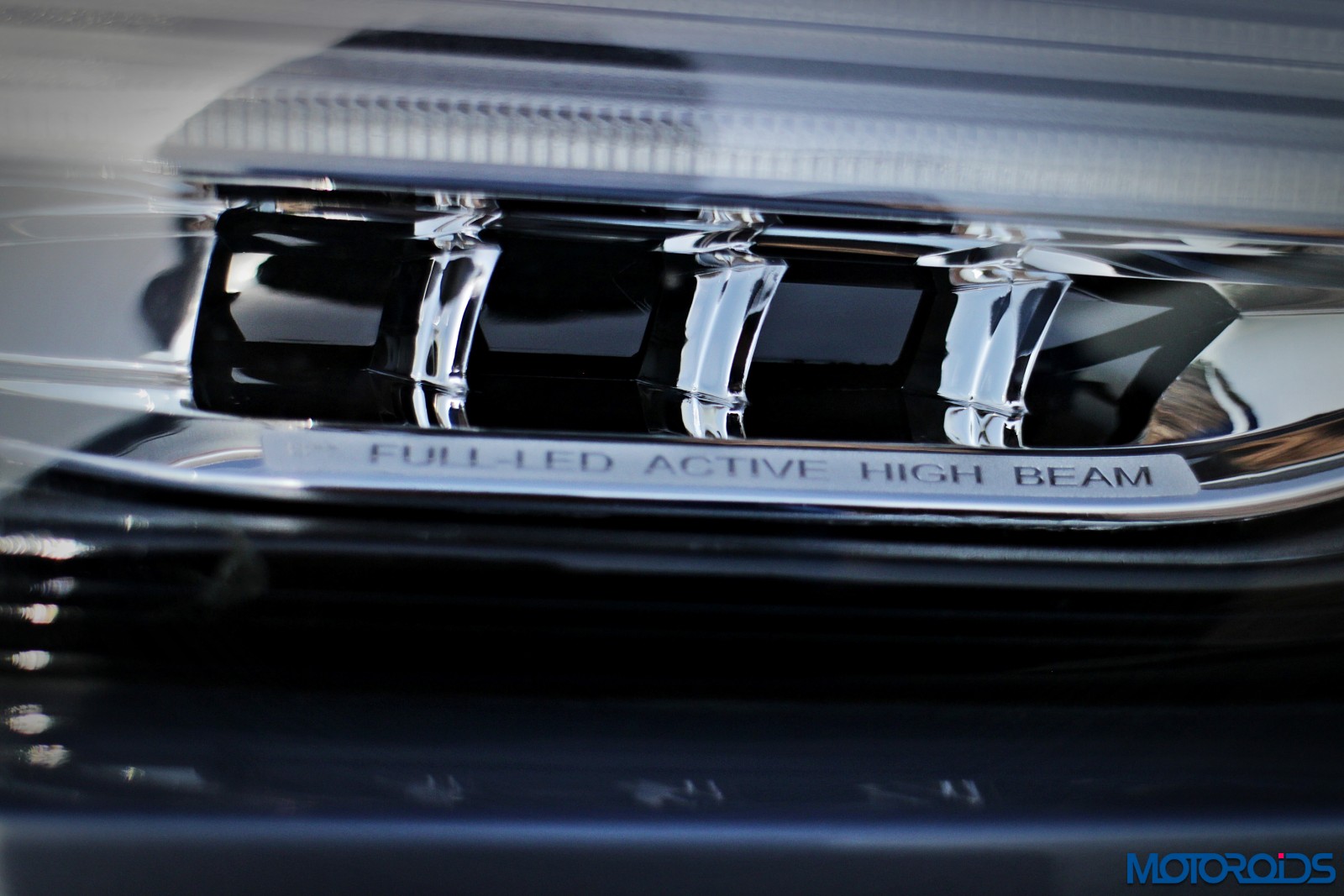 The headlamps are full LED and feature finely placed illumination units. The attention to detail is incredible. The reflectors are inspired by the sails of a viking ship. Then they have Volvo inscribed in the headlight chrome along with “Full-LED Active High Beam” embossed just below the LED cluster. 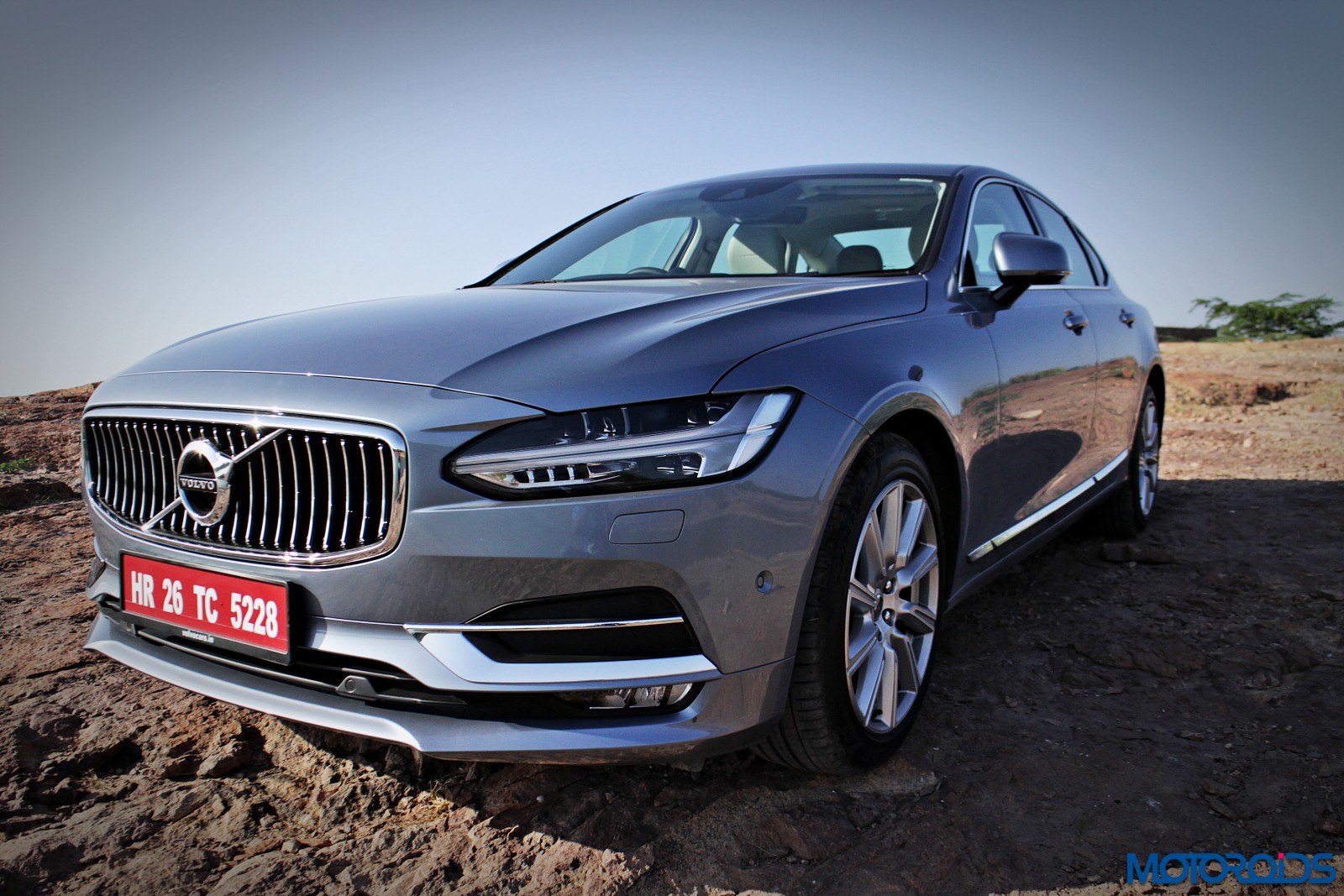 The people at Volvo have tried to give the car a personality which stands out without making a noise about it. They prefer calling it ‘a Lion in a jungle of luxury cars’.  It’s quiet and composed but has a regal grandeur about it. 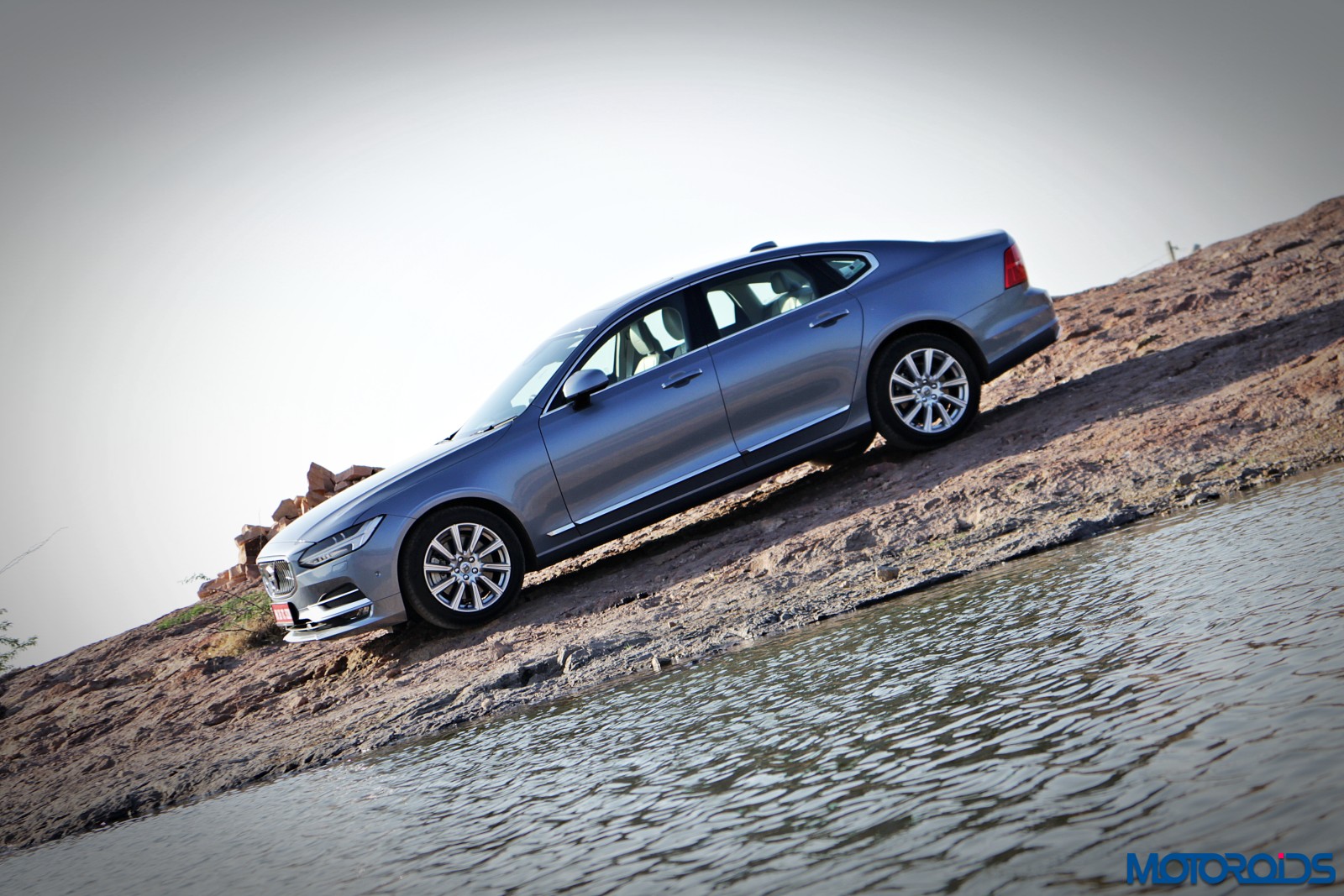 The lines on the car are straight yet elegant. One of these lines runs from the hood of the car, through the high shoulder doors right up to the boot. 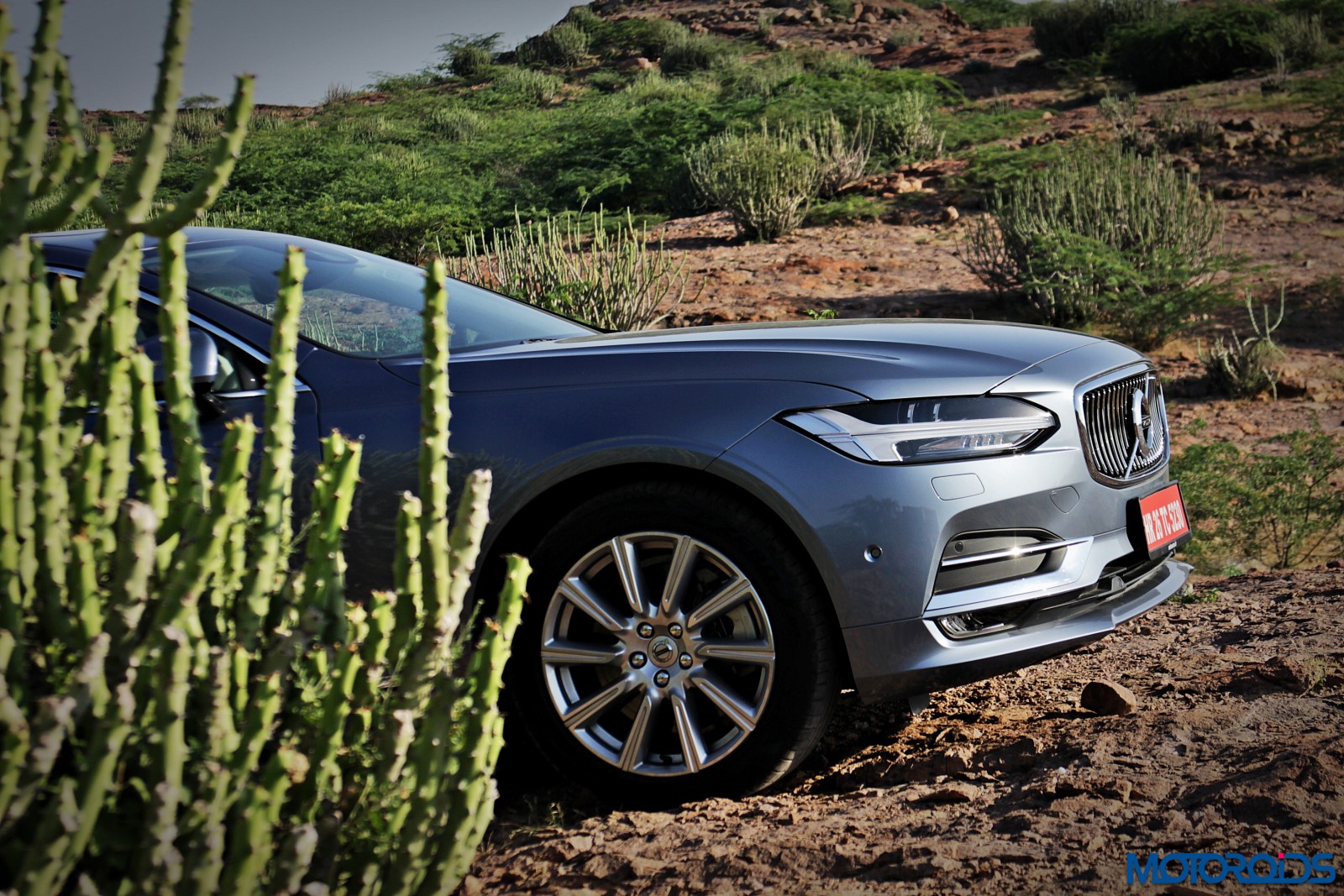 Even the side profile of the front end is straight, a design element inspired by a luxury yatch. 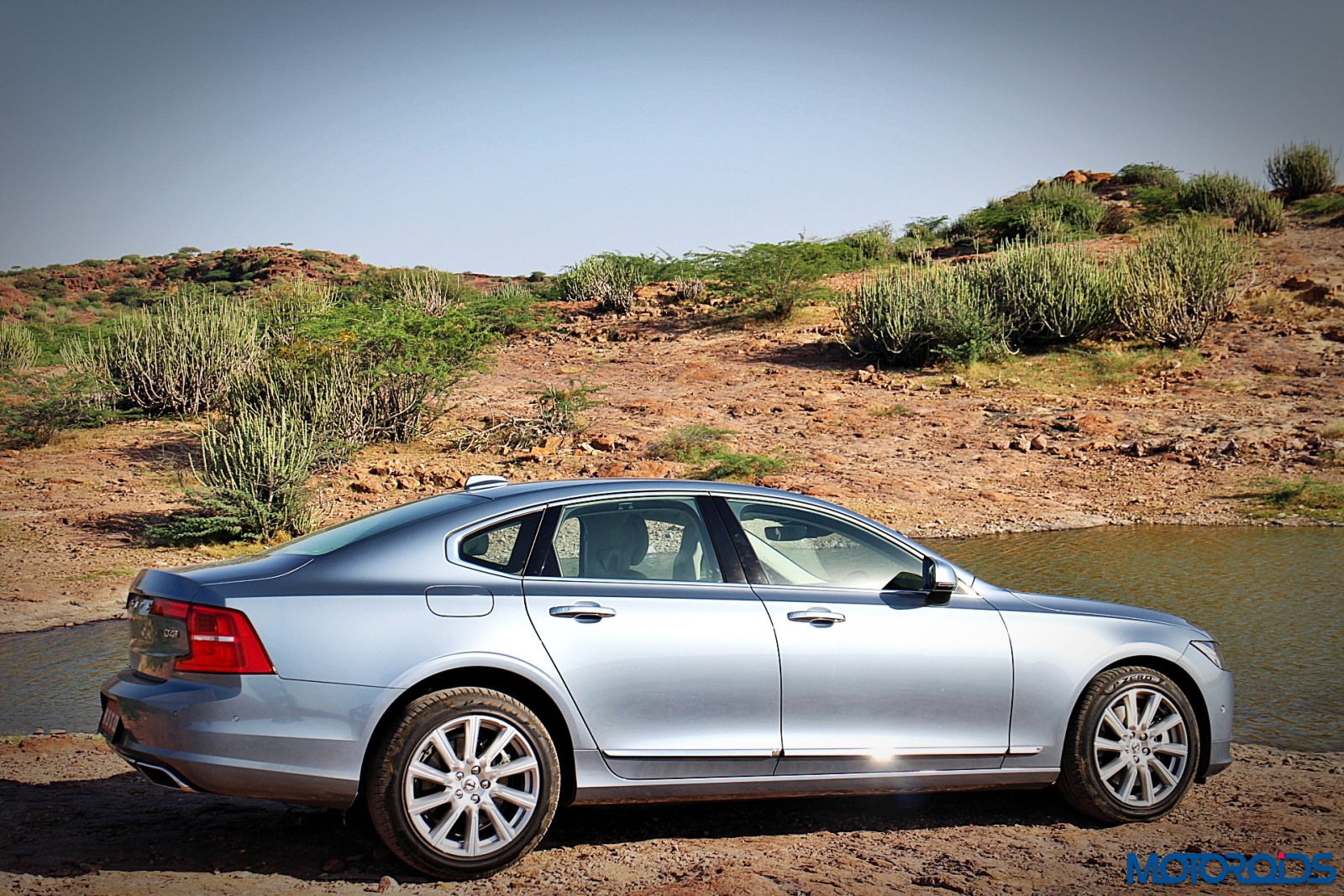 The C pillar and rear features a coupe like shape as the roof slopes down rather sharply into the boot-lid. Along with standard 18 inch 10-spoke alloy wheels, this car has one of the best stances just not in its class but among most cars we see out there. Volvo has used chrome as a highlighting element just right. One gets a beautiful chrome line at the bottom of the doors and all around the window sills. 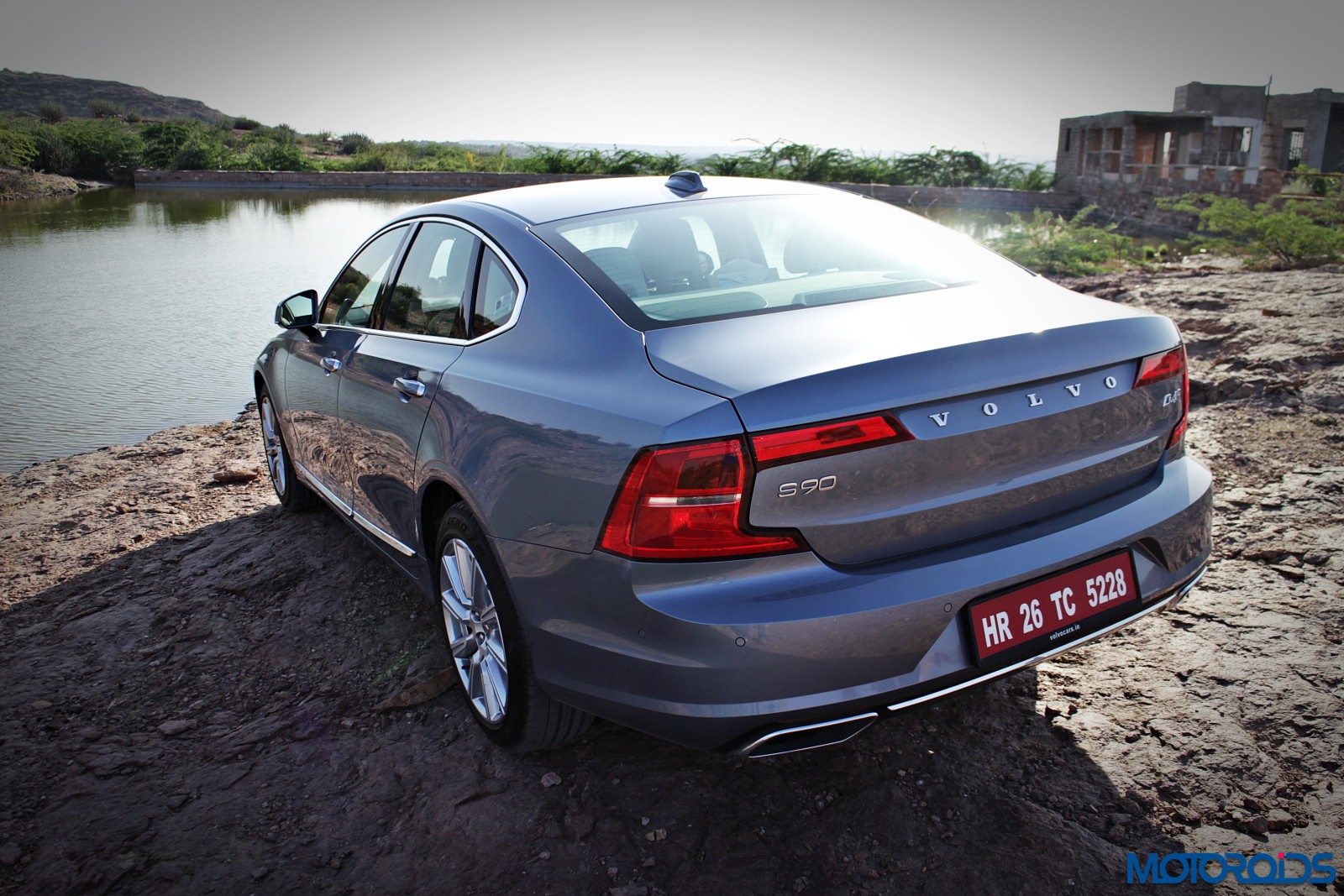 At the rear you’d appreciate the beautiful stance the S90 has. Beautiful C shaped tail lights blend into the upper section of the boot lid. The Volvo logo runs in the lid recess all along its length. The rear also gets chrome treatment with chrome surrounds around exhaust pipes and over the bumper lip.

As with the exterior, the interior of the S90 also impresses with its classiness and simplicity. The Inspiration trim (the only one coming to India for now) gets complete Nappa Leather treatment on the inside. As soon as I got into the car, I ran my hands all over the leather wrapped dashboard and a broad smile covered my face. The feel of the leather on dashboard is exquisite. 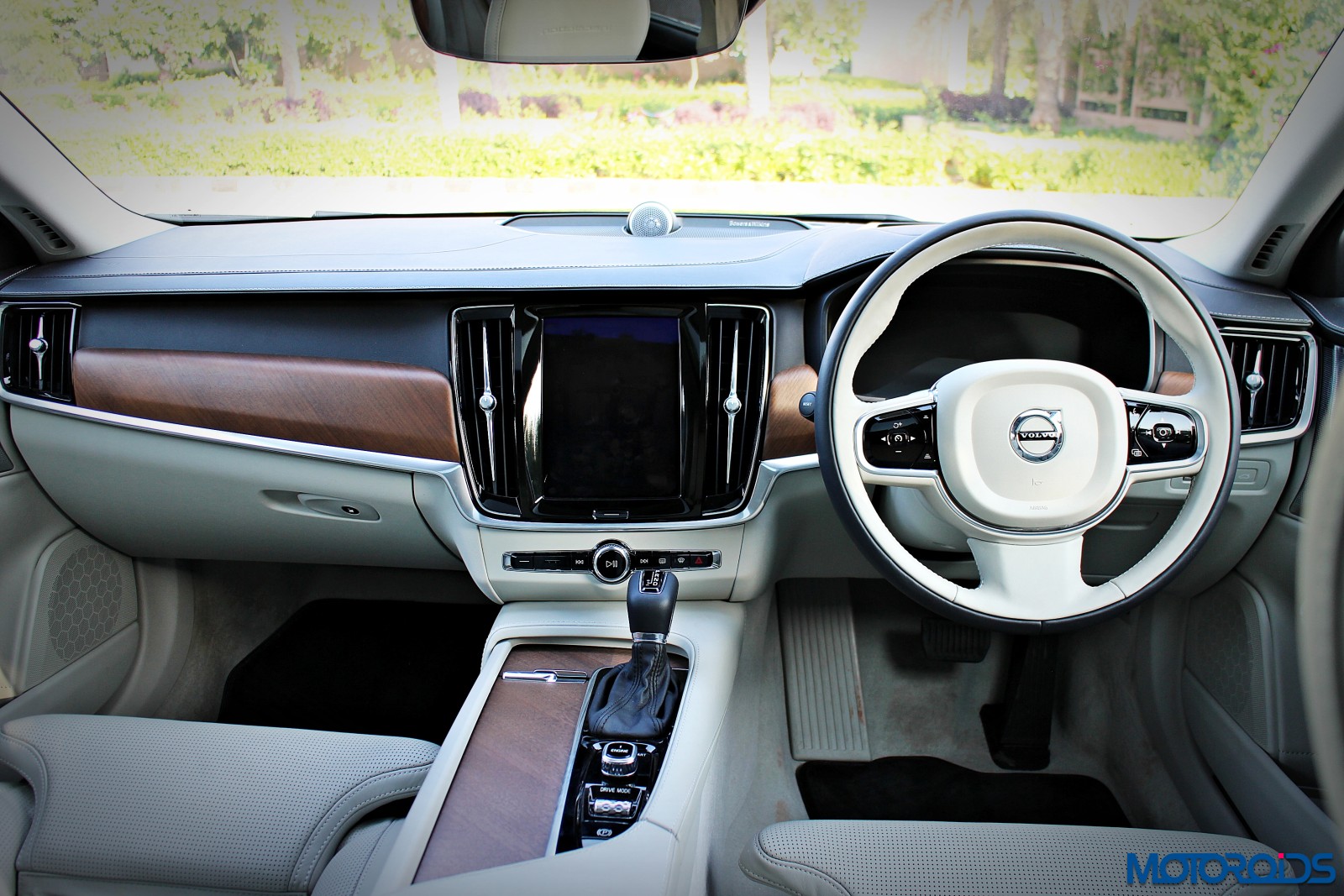 Interiors are shared with the XC90 and look equally smashing here. Great attention to detail abounds the cabin. You get unpolished walnut wood panels which would make you loathe polished wood forever. A chrome lining runs across the dashboard – it’s cast from a single piece of chrome and has no joints. 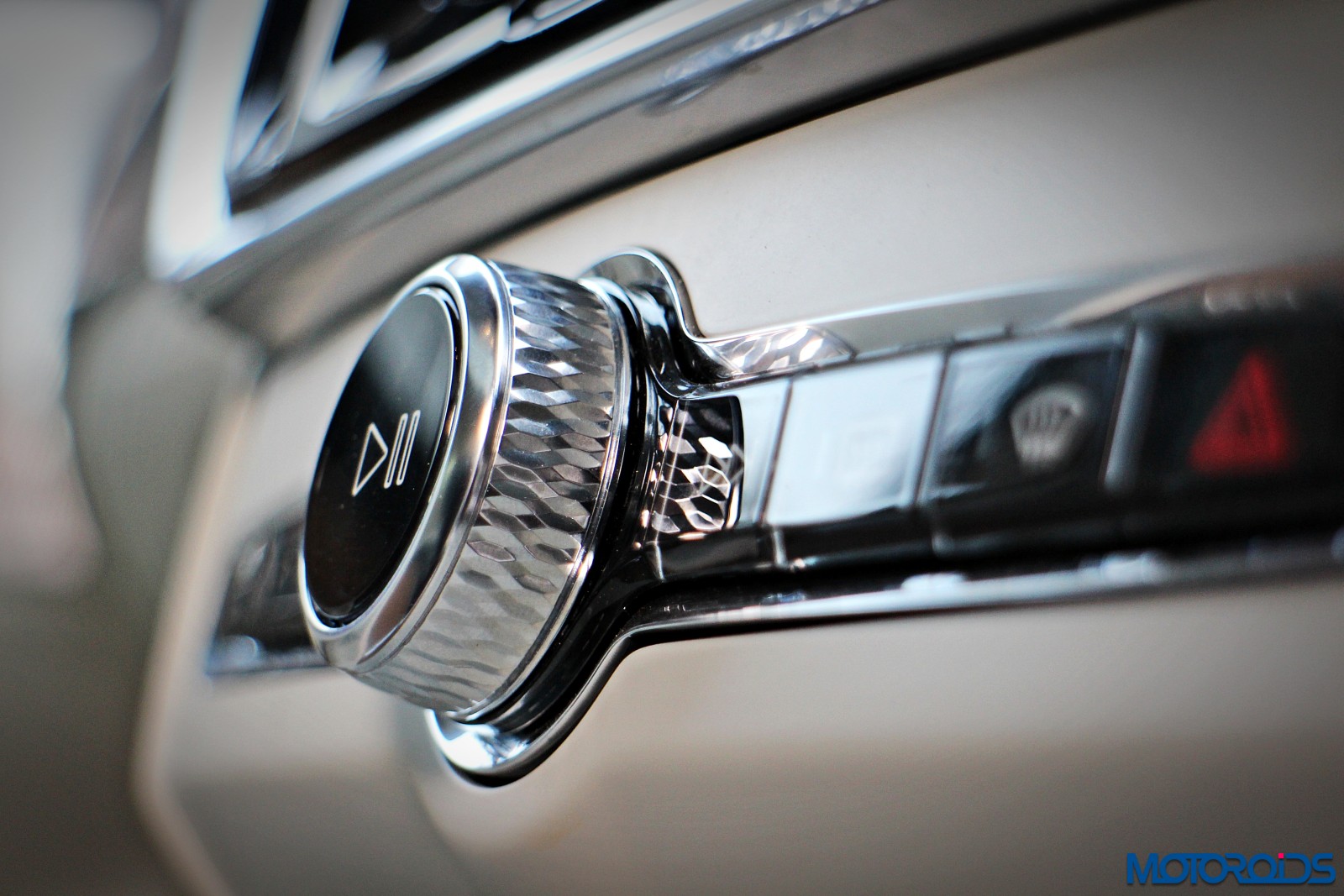 Luxury is evident in every aspect of the interior you look at. AC vent knobs, driving mode selection scroll, dashboard buttons and start-stop button – everything is built with extremely high quality materials and exudes phenomenal finish. 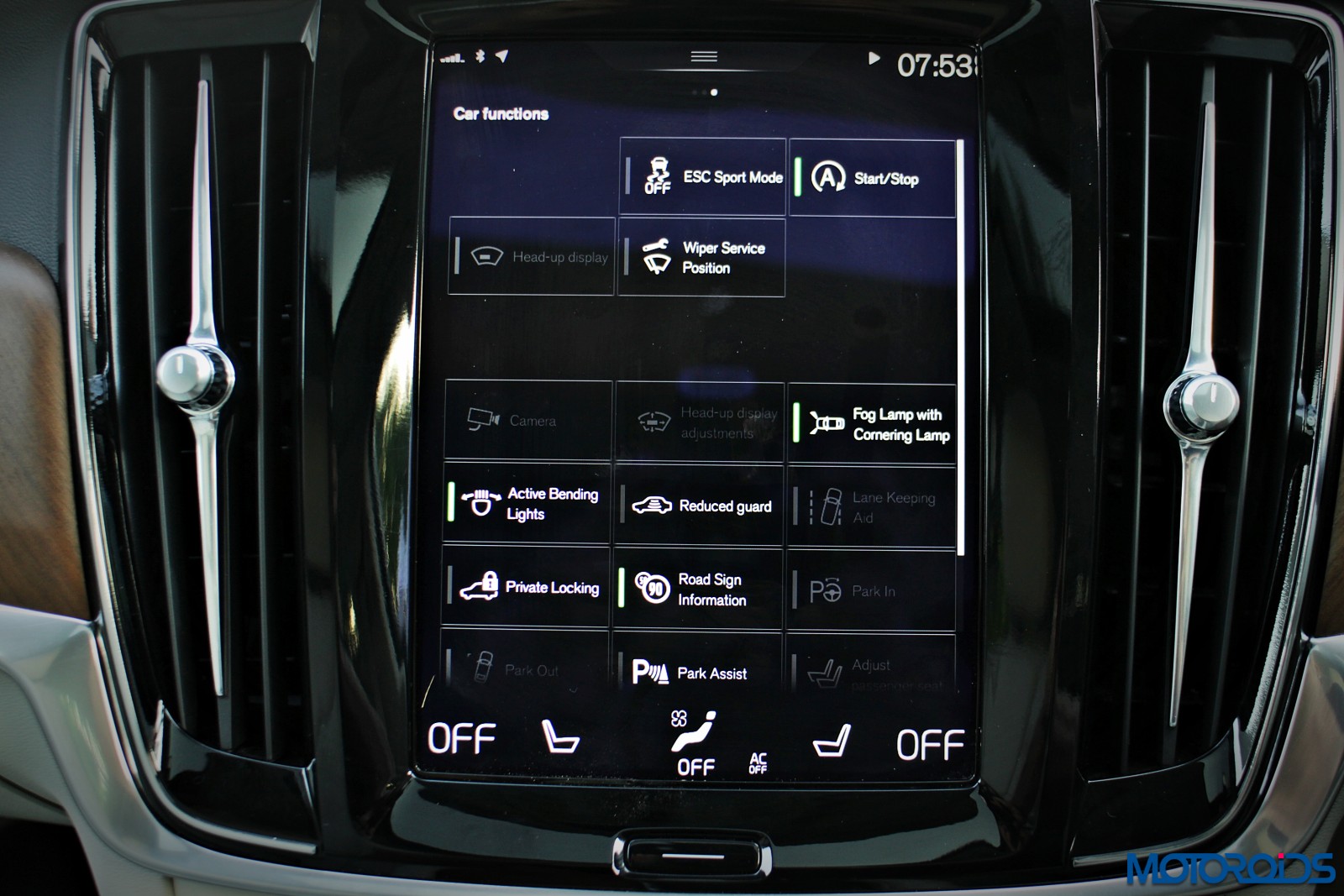 Central console gets a large tablet display from where you can control the car’s functions, be it AC or music system or car configuration. This makes the dashboard look exceptionally clutter-less. The only visible buttons are immediately below the screen, and they are few in numbers. The central screen has a high resolution display, features Apple Carplay and is very easy to use. Technology runs deep in the 12.3 inch LCD display as the cockpit. One can configure it to their preference. 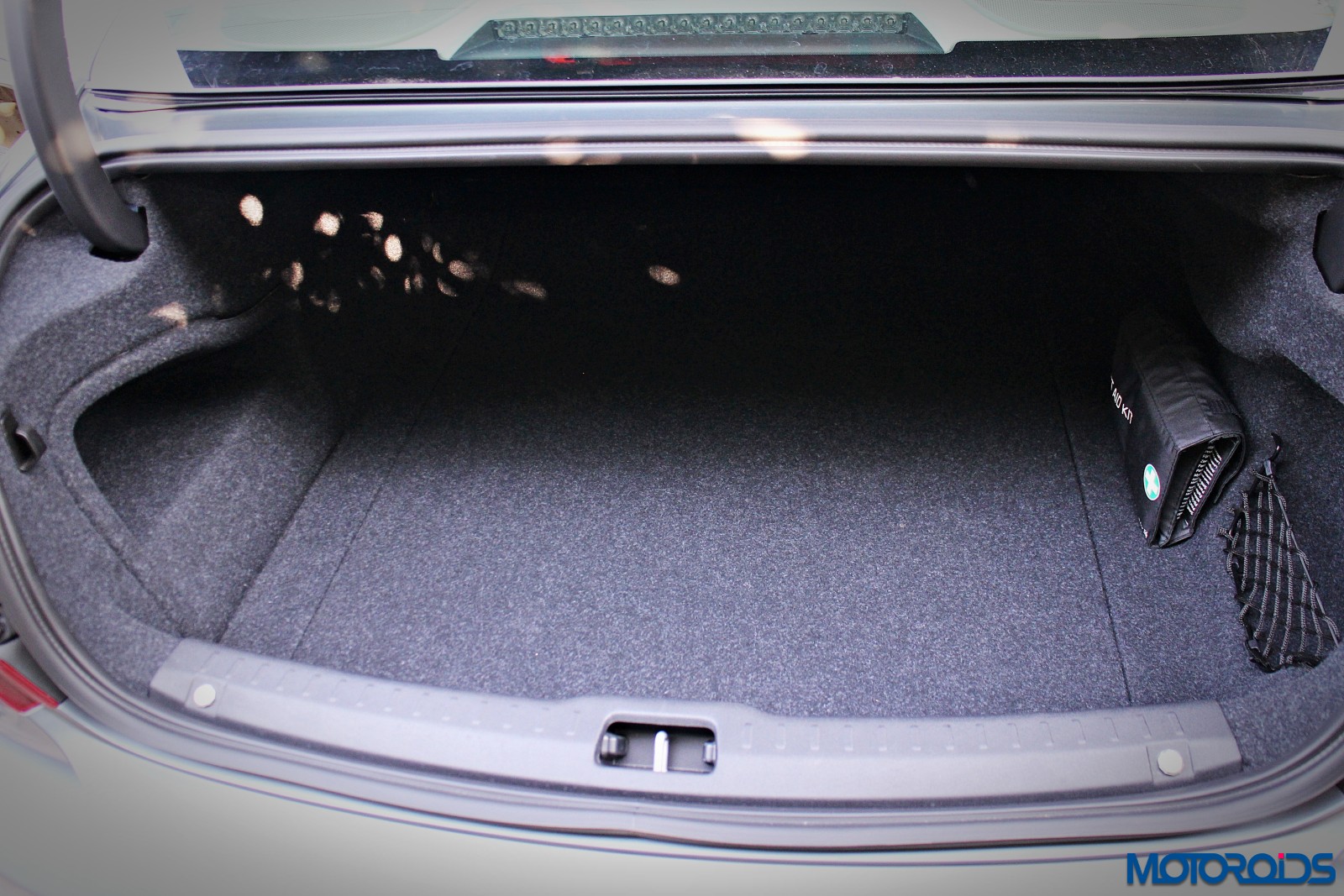 The 500 L boot is not the most generous in class but you do get a proper spare wheel which we feel is a necessity in our country. Somehow we are not very comfortable with most premium manufacturers sticking to their stand of not providing a spare. Boot lid is powered and if your hands are full with luggage or Diwali shopping, you can just swipe your foot under the rear bumper and the boot lid swings open. Great feature to have on family vacation sans your chauffeur.

Volvo prides itself for creating some of the safest and the most comfortable cars in the world – this one’s not different. The seats in the S90 have off-road protection wherein they absorb the jerks in case the car veers off the road or gets into a crash. 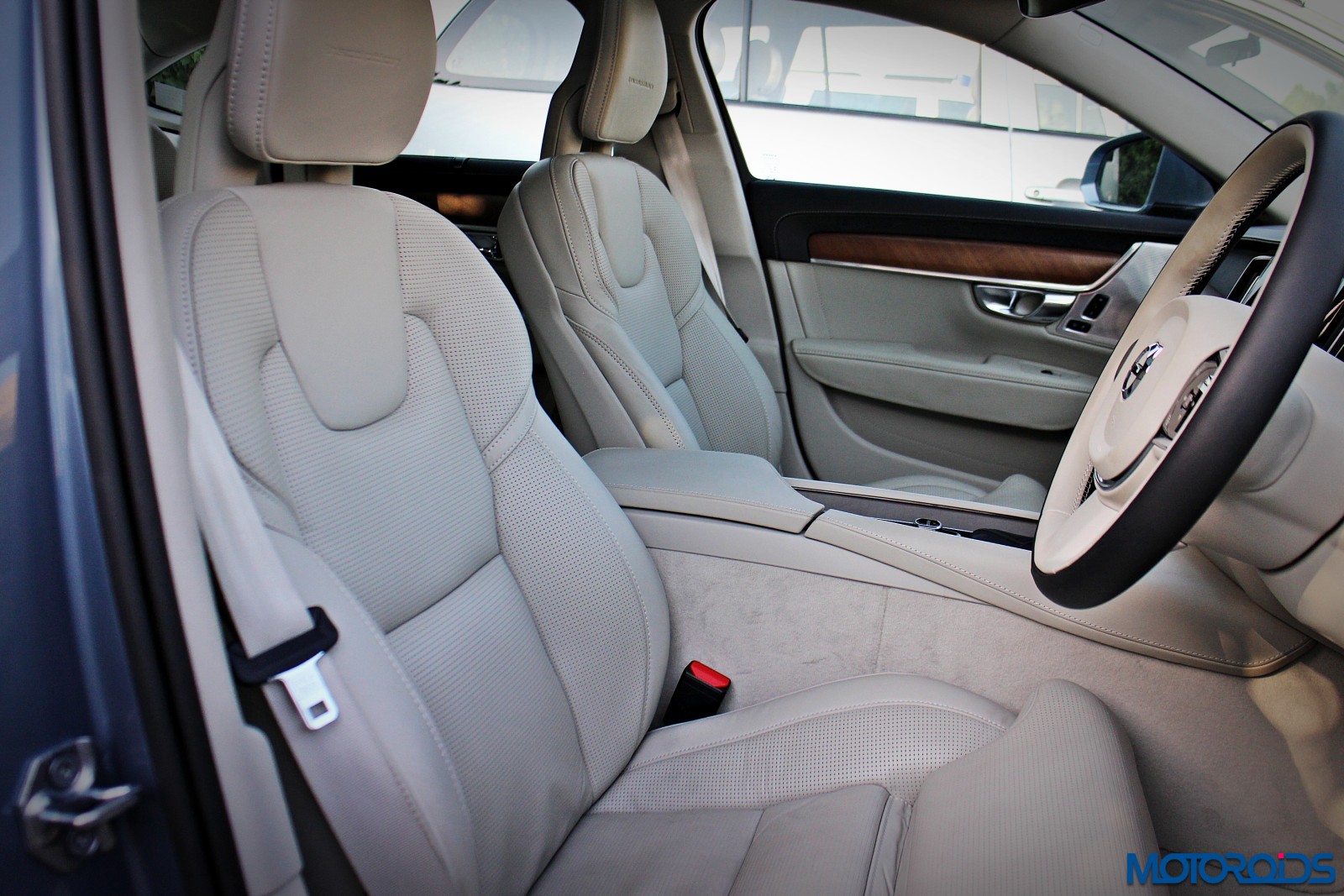 Needless to say, the seats for both driver and passenger are fully power adjustable along with powered side-support and cushion extension in front seats. The seats also get extendable and powered under thigh support. This is a feature we really liked, as it allows you to drive for longer without feeling fatigued. 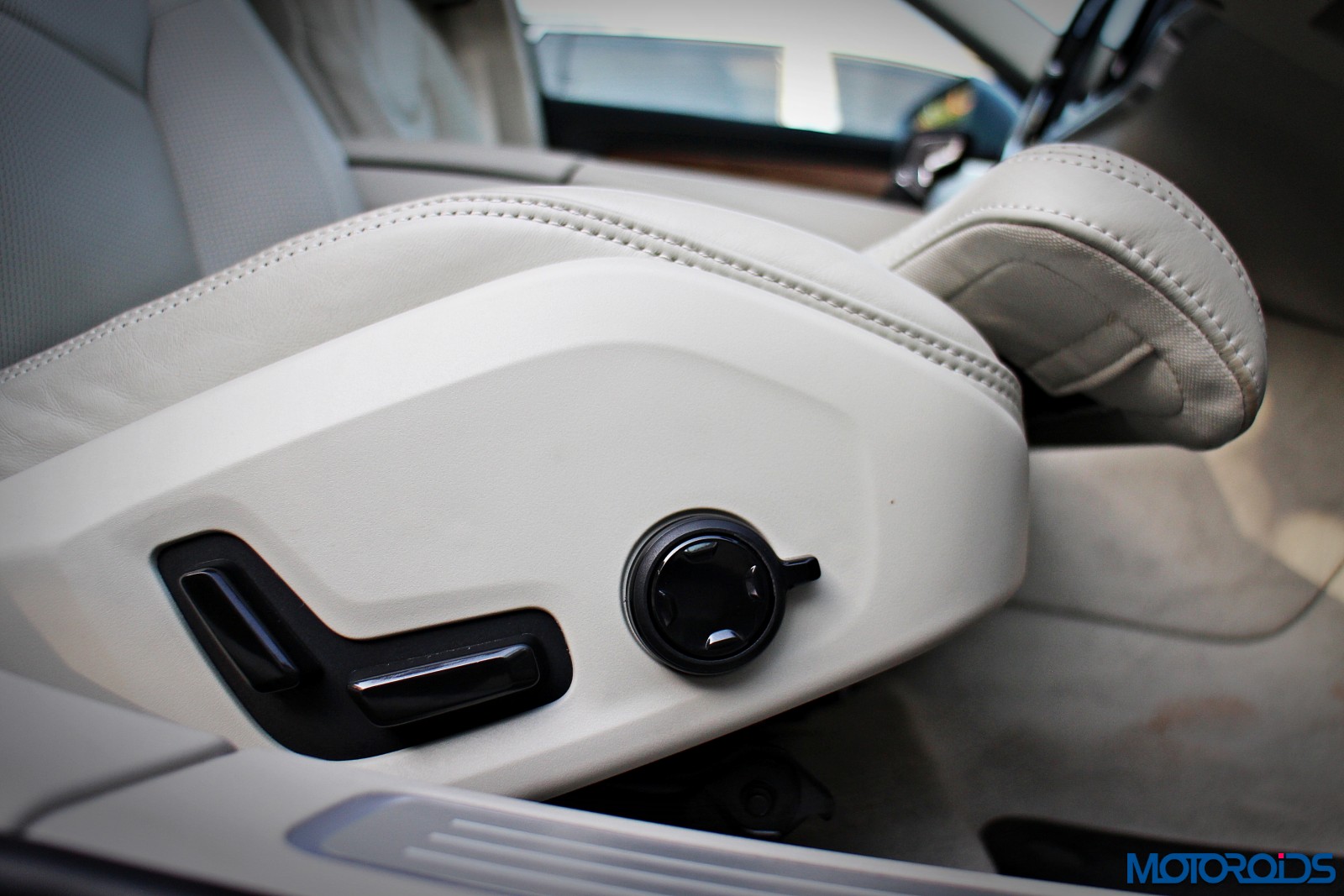 The S90 would be primarily used as a chauffeur driven car, and it offers a fantastic ride quality to ensure supreme comfort for the back benchers. The S90 features air suspension, endowing the car a phenomenally plush ride, making you feel that the roads are smoother than they actually are. 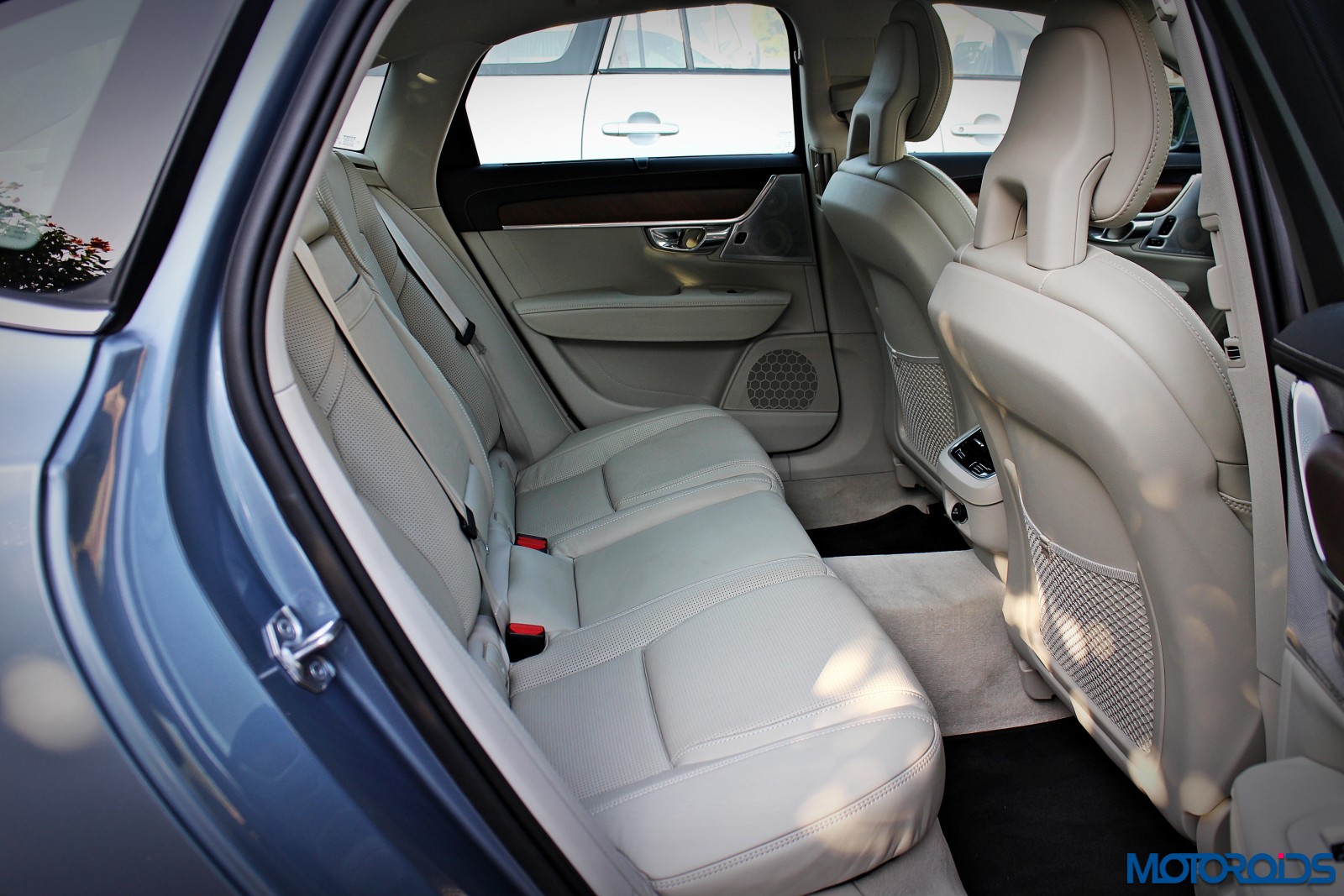 Ground clearance is little less than ideal for our roads though. We spent plenty of time in the rear seat and found the absorption qualities to be first rate. Our little gripe is about the legroom which could have been better for the class. With a tall driver and a tall rear passenger the knee room doesn’t appear to be the best out there. The seats, however, are very comfy and provide the right amount of support.

Rear passengers get a dedicated dual zone AC which can be controlled using a touch screen. In case you are too busy to operate the AC, your chauffeur can do it for you from the central console. You can plug in your phone or laptop to the 12V charger located just below the rear AC vents. B pillars gets AC vents as well allowing for a super quick cooling of the back seats, which is a boon in the hot Indian conditions. 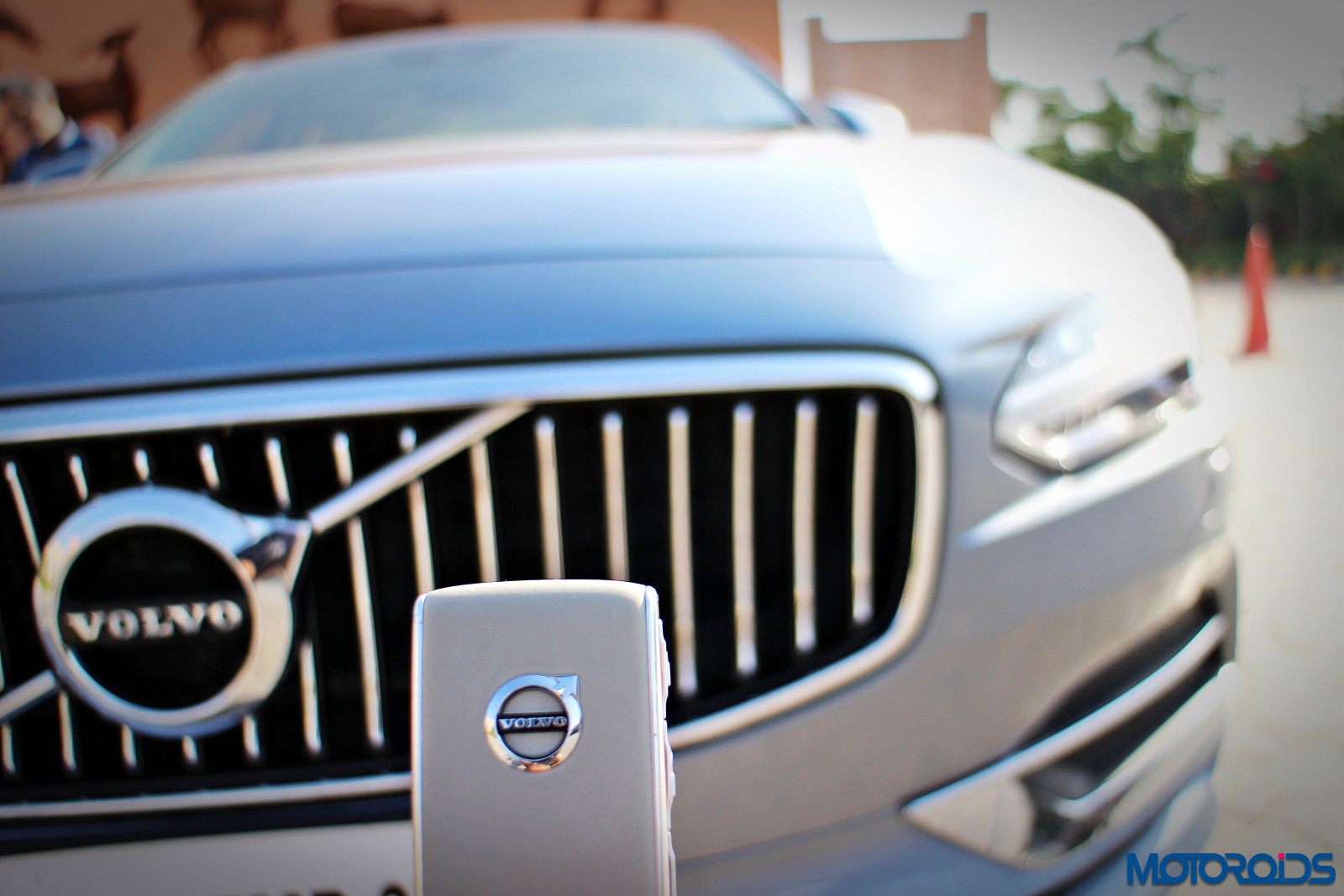 There are so many assists in this car that Volvo could probably gotten away with calling this car Jarvis. Lane assist allows you to keep lanes, while Park Assist apart from helping you park the car can even turn it all by its own when it sees a bend in the road. One should remember that it’s not an autonomous car though and need your hands on the wheel at all times. Oh, and just so you know, it even gets cornering headlights.

The variant we drove – the D4 Inscription, comes with a 1,996 cc 190 hp turbo diesel power plant which churns out 400 Nm of torque. The engine, coupled with an 8 speed automatic gearbox, propels the car in reassuringly quick, yet jerk free manner. 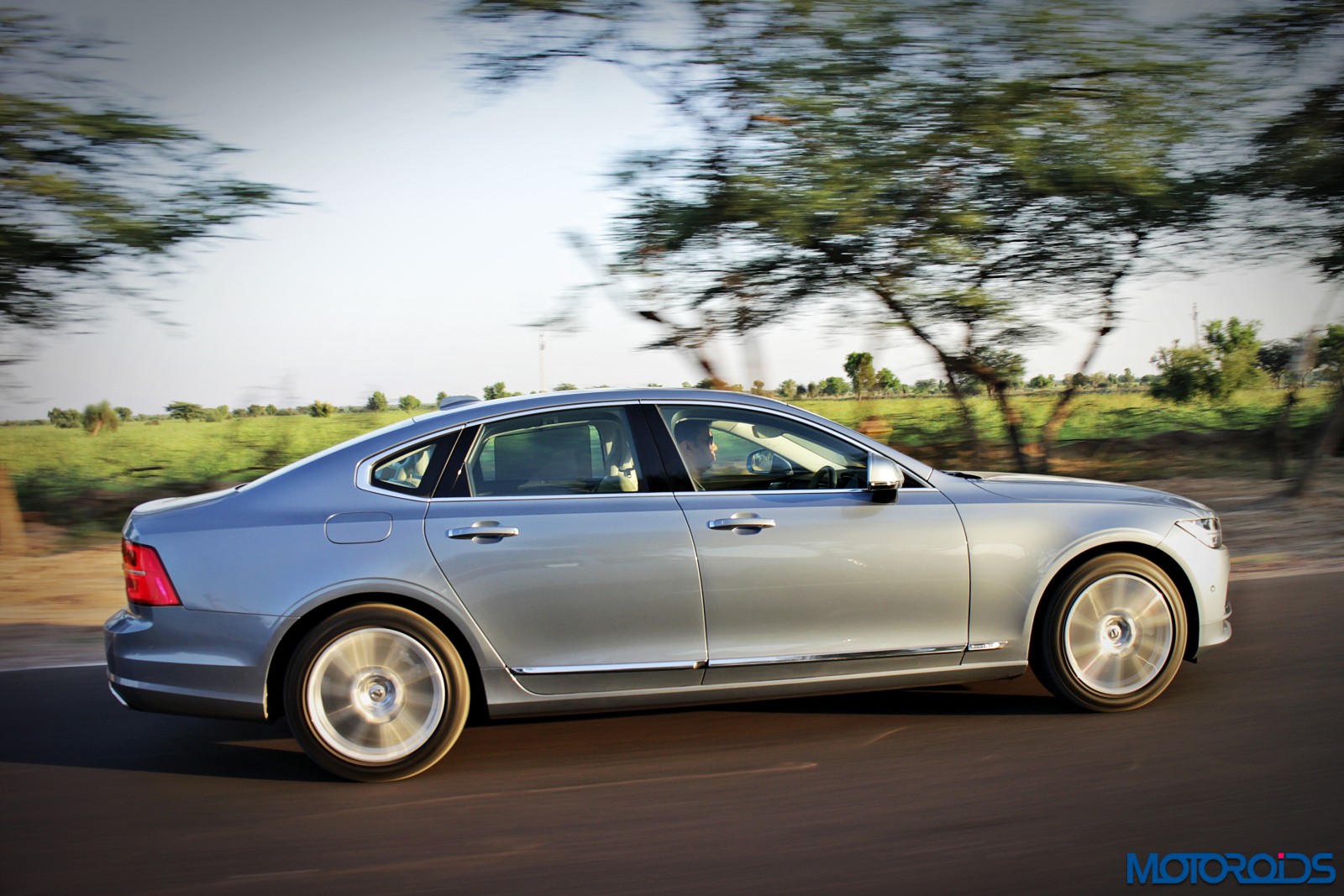 The acceleration is butter smooth, gear shifts are not noticeable at all and the S90 gathers pace in the most inconspicuous ways possible. That doesn’t mean there’s any lack of performance here, though. The S90 would hit the ton in a shade over 8 seconds, with the engine showing propensity to rev hard all the way up to 5,000 rpm without any resistance. The S90 is more like a petrol car, with its lack of diesel noise and high revving nature.

The HUD (Heads-up display) is really beneficial here as one could keep a watch on the speed without having to take the eyes off the road. The acceleration is brisk for a 4-pot diesel motor, though the S90 does a mind boggling job of masking its speed. Despite being a low rider, the S90 doesn’t feel fast, even when it’s running deep into triple digits. Part of it is due to the buttery smooth engine which doesn’t feel hassled even when revved hard and is incredibly devoid of noise. 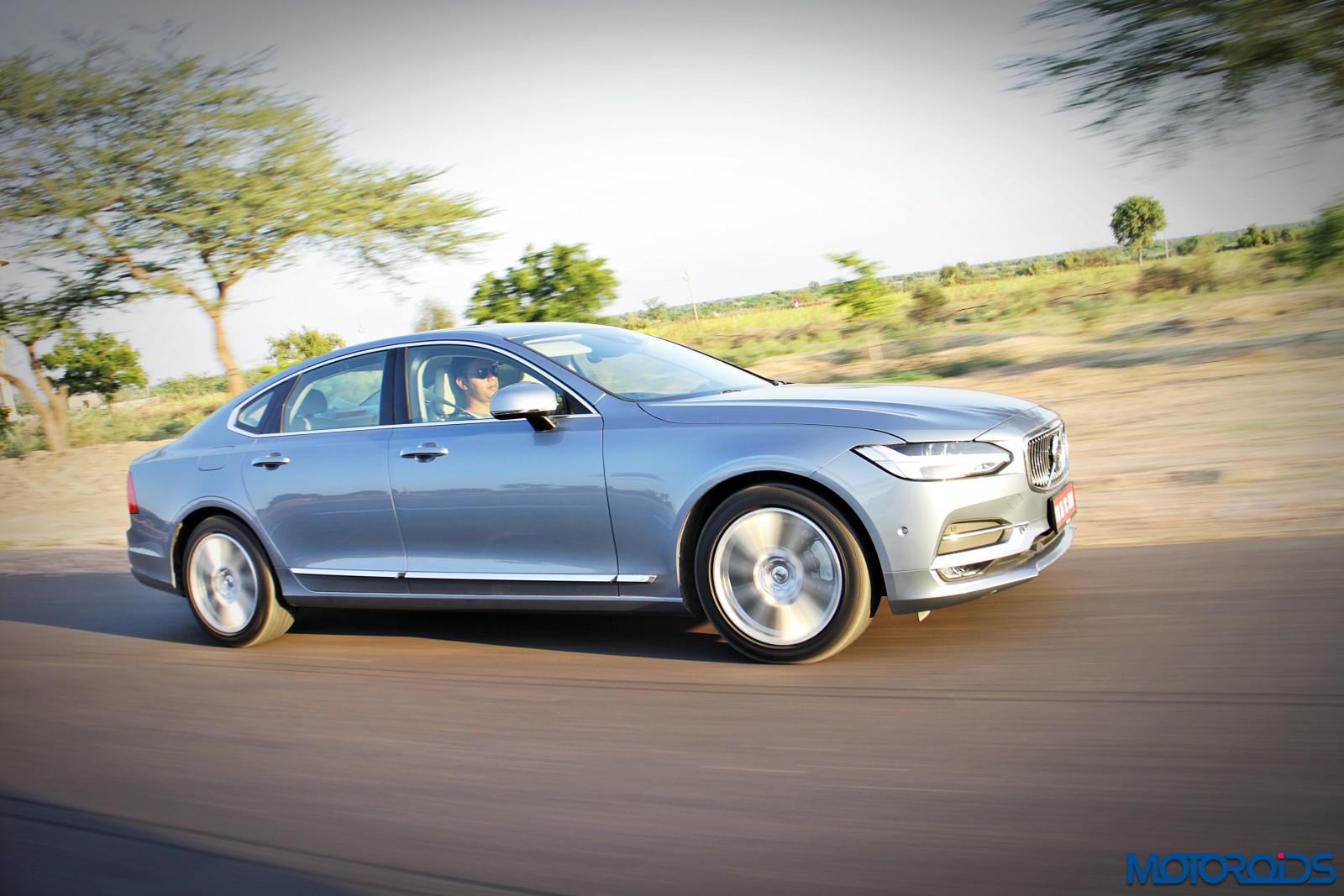 Acceleration is incredibly linear, which means that you never get pinned back to the seats even if you mash the pedal hard. Full points to Volvo for the velvety engine-transmission combo.

You get three driving modes with the S90 – Eco, Comfort and Dynamic along with an individual mode where driver can adapt drive modes Comfort, Eco or Dynamic to his personal preferences. There is a noticeable difference in the power delivery between the Eco and Dynamic mode. Not only do these modes change power delivery, they also change suspension and steering settings. 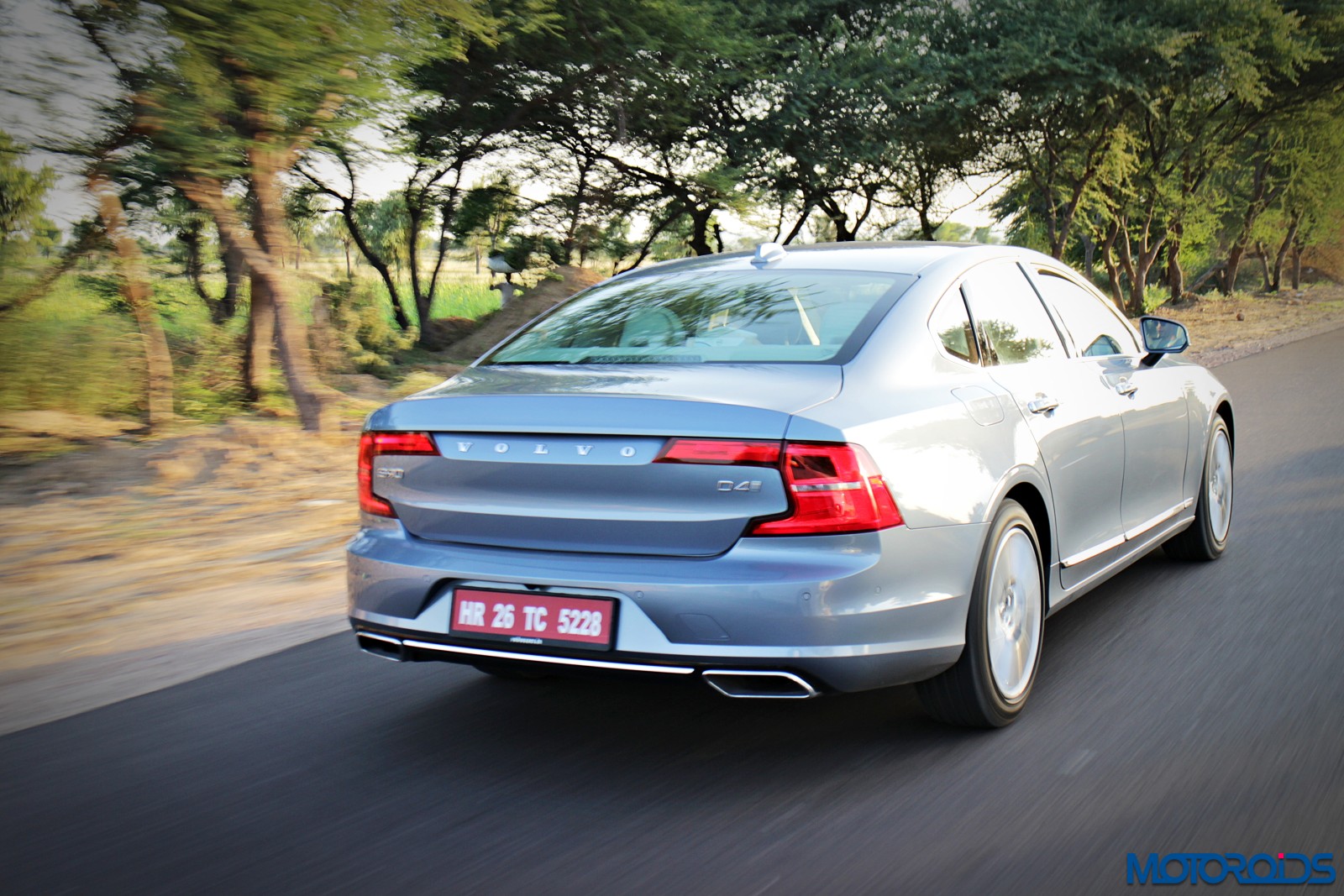 The engine feels relaxed, suspension soft and steering light in Eco and Comfort modes. In Dynamic mode, gear shifts are moved higher up the rev band, the steering weighs up and the suspension tautens up for action.

Brakes on the S90 are slightly grabby, with some unlikeable firmness to them. You have to press the pedal slightly harder than usual, though once in action, those discs have all the power to bring this sleek limo to a halt in the most reassuring fashion possible. 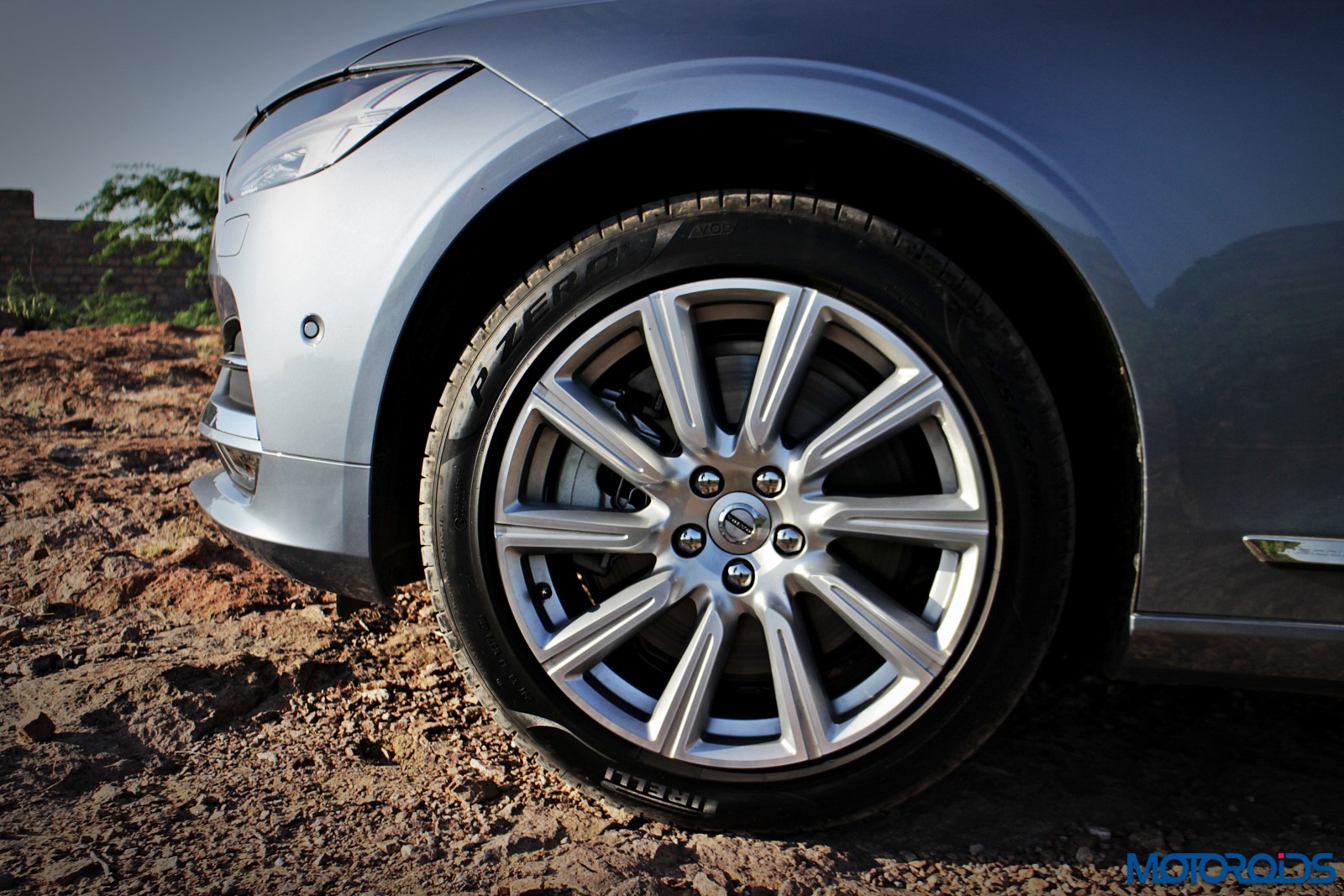 Pirelli has designed tyres specifically for the S90 and it does show. The footwear on the S90 is wider than others in the segment with a low profile. The Pirelli rubber is grippy, looks great with its slim walls and unique pattern while also offering a plush, quiet ride.

The S90 has a FWD layout, and it handles rather well for that setup. Steering weighs up at high speeds adding tons of solidity to the drive. Tyres have ample grip on offer and the suspension has what it takes to offer just the right mix of comfy ride and taut handling. The handling here isn’t sports car like though and the driver oriented cars in the segment may offer a better feel overall, but the S90 always feels planted, devoid of any unwanted body-roll and extremely poised at all speeds. It could have been a bit more involving and exciting, but then again, its brief leans more towards luxury than out and out performance.

The S90 tugs at your heart’s strings with its sensual design, creamy performance and a luxurious, classy and feature laden interior. With its frugal powertrain, it’s pretty practical too. Distinctive, modern and every bit a looker, the S90 is hard to fault. 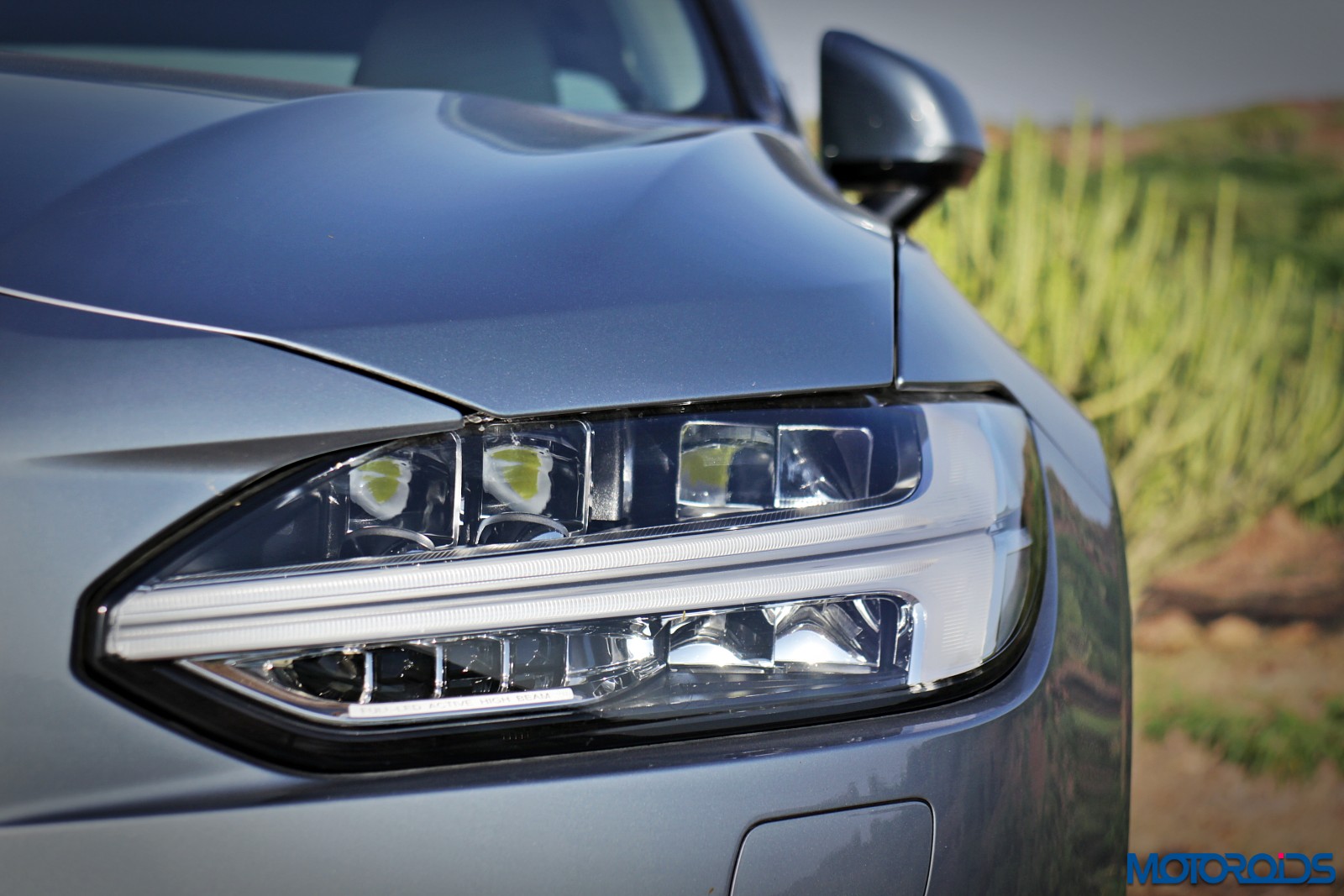 While we’ll reserve our verdict until the prices are out, as things stand, the S90 has the makings of turning the segment on its head if priced and marketed well. In the meantime, its Swedish maker needs all the accolades for having created something so stunningly gracious.

Check out a jumbo image gallery of the S90 below, just click on one of the thumbnails to bring on the gallery slider. We will update this review with price and our final verdict once the S90 officially launches in India early November. Do share the article with your auto enthusiast friends.