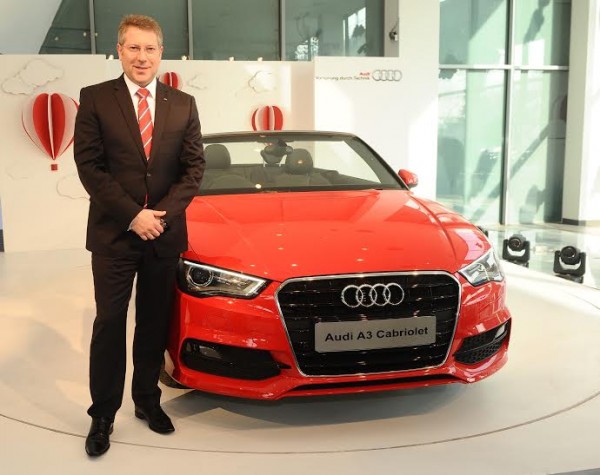 Compact cabriolets are apparently quite a popular body style in the west, and although Indian conditions don’t befit open top motoring that much, the Audi A3 Cabriolet comes as breath of fresh air. Audi says that the A3 Cabriolet is the first compact luxury convertible to be launched in India, and we second that, considering the first was a forgettable, rattly and wheezy San Storm.

The A3 Cabriloet will employ the familiar 1.8 litre TFSI engine generating 180 hp mated to a seven speed S tronic® dual – clutch transmission, which endows it to sprint from 0 to 100 km/h in just 7.8 seconds with a top speed of 242 km/h. Prices for the A3 Cabriolet start at INR 44,75,000 ex-showroom Delhi (bookings now open).

At, 4421 mm long, the A3 Cabriolet is a smidgen short than the A3 sedan on which it is based. Visually, there isn’t much difference from the sedan, apart from the missing roof of course. There’s aluminium finish for the doors and the windscreen frame, like on the R8 Spyder. Like on all A3s, the diamond-design Audi Single-frame grille, in high-gloss anthracite with frame in matte aluminium gives it its identity. The rear now gets a new integrated boot spoiler, while the S-Line package, which adds bi-xenon headlights with LED DRLS, slightly more aggressive bumper-work among other things is standard for the A3 Cabriolet.

The lightweight, retractable soft-top is the main highlight here. The high quality fabric hood in a “K Design”, controlled through a central button opens and closes in less than 18 seconds, up to a speed of 50 kmph. An active rollover protection system protects the occupants in the case of a rollover. The extended rear overhang plays a key role in the harmonious proportions of the two-door car. The Audi A3 Cabriolet offers 14 exterior color options. Alternatively, customers also have the choice of an infinite number of exterior colors from Audi Exclusive. 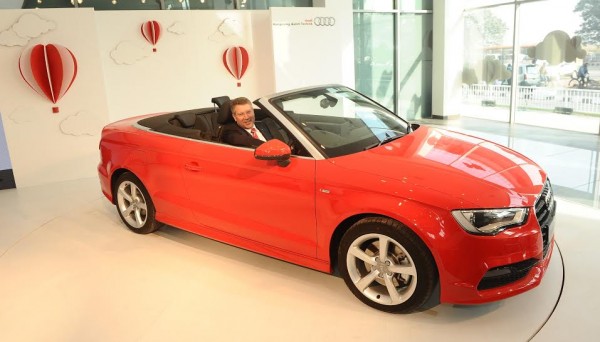 The interior design of the open top four-seater mimics that of the A3 Sedan as well. However space at the back could be a little dicey, as the car becomes shorter in length. The luggage capacity stands at 320 litres. The interior colors are adapted to the equipment lines offering more than six Audi exclusive upholstery shades. Milano leather upholstery is standard on the Audi A3 Cabriolet. A whole modular system of infotainment components is available in the New Audi A3 Cabriolet. At the very top are the optional Bang & Olufsen Sound System and MMI Navigation plus with retractable seven-inch MMI monitor. The user terminal has a rotary/push button control and MMI Touch® which together form the
touch-wheel, the top of which is a touch sensitive pad for inputting letters and numbers. Dual Zone Deluxe Auto Air Conditioning with sun position sensor, new TT inspired Jet turbine design air vents with spot/diffuse function and Light & Rain sensor are some of the other highlights.