Home News Are these the interiors of the 2015 Mercedes C Class? 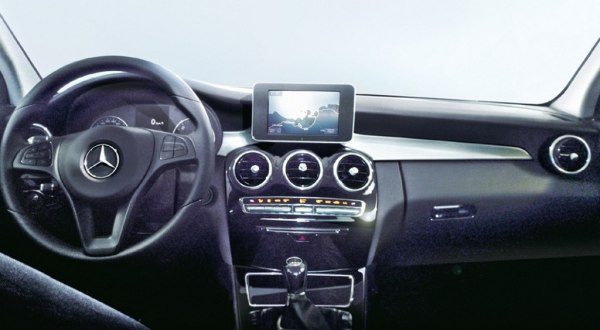 Only a few hours back, we posted the interior images of the upcoming 2014 Mercedes S Class. The next generation of S Class has been making news since quite some time now and is poised to raise the bar in its segment. This would mean that the boffins at BMW and Audi would have to quicken the development of the next generation 7 Series and A8 respectively.

While you saw the interior images of the new S Class earlier, what we have here now is a speculative rendering of the interiors of next generation 2015 Mercedes C Class.

The rendering is courtesy the good folks at AutoBild magazine.

The above rendering gives us a hint of what might be in store for us in near future. The focal point in this rendering is the centre of the dashboard, which gets an aircon-vents arrangement that is reminiscent of that on the dashboard of the new A Class. The top of the centre console gets a large touchscreen that will help the driver adjust various interior and mechanical settings of the car.

We won’t really be too surprised if the aircon vents on the dashboard of the upcoming C Class would sport an aircraft propeller design that can be seen on the A Class.

The 2015 Mercedes C Class will be based on a new platform and will be larger than the current car. The new C will feature more equipment and will come loaded with some of the features that will be borrowed from the Mercedes E Class facelift and the upcoming Mercedes S Class.

The 2015 C Class will be as much as 100mm longer and 40mm wider, which will make it considerably larger than the upcoming CLA Class entry level sedan in Mercedes line up of cars.

Mercedes has already started readying its manufacturing facilities for the production of the new model and the Tuscaloosa plant in Alabama is believed to have become the first plant to have received the required machinery. The first 2015 C Class though, will be produced at the Bremen plant in Germany.

The New C Class, in all probability, will make its public debut at the next Geneva Motor Show.