Anand Mahindra, the Chairman of the Mahindra Group, met the visiting President of South Korea, Ms. Park Guen-Hye, in New Delhi on Friday, January 17, 2014. He was accompanied by Dr. Pawan Goenka, Executive Director of Mahindra and Chairman of Board of Ssangyong Motors, and Mr. Rajeev Dubey, Member of the Group Executive Board. 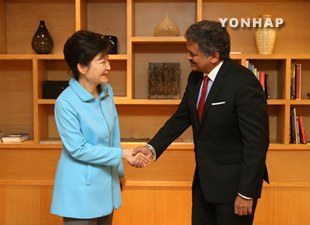 President Park expressed the desire of her Government for stronger economic ties with India. She expressed gratitude for Mahindra & Mahindra’s investment to acquire Ssangyong, which had applied for a court-led debt-rescheduling program in 2009. She appreciated Ssangyong’s decision last year to rehire some 450 workers who were on unpaid leave due to the company’s financial woes, and stated that this was an example of a good management and labour culture.

Mr. Mahindra described the exclusive meeting with the President and her key government leaders, as very cordial and positive and expressed his belief that the economic relationship between Korea and India held great potential,
where the two countries together could play an important collaborative role in helping make Asia the engine of growth of the world economy. He further said that the Mahindra Group’s experience in Korea has been very encouraging and holds greater promise for the future.

Mahindra had acquired Ssangyyong Motor of Korea in 2011. During the past 3 years Ssangyyong has gradually turned around, posting profits in the past six months.

Dr. Goenka said that the turnaround is the outcome of hard work of the Ssangyong management and the workers. He also informed the President of Mahindra’s strong and positive intention to support investments by Ssangyong Motors.

Mr. Mahindra informed the President that the Mahindra Group, which comprises multiple, diverse businesses, is exploring opportunities for investment in other sectors. For example, Mahindra Finance, which is one of India’s largest non-banking financial services companies, is currently exploring a joint venture with the Woori Bank of Korea to extend automobile financing to customers of Ssangyong Motors.