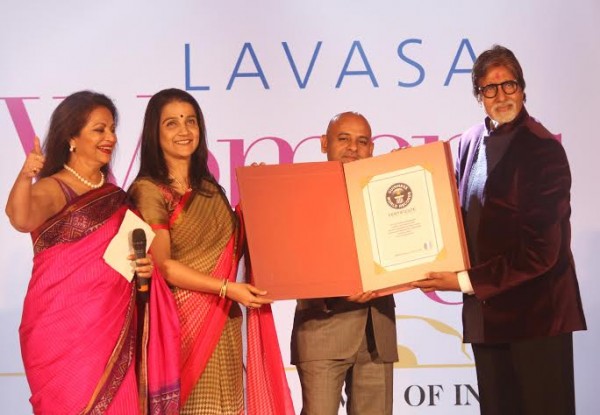 Winners of the 6th edition of Lavasa Women’s Drive were felicitated by super star Amitabh Bachchan at an in Mumbai today. Mr. Bachchan presented awards to the first three winning teams from Mumbai and  Pune who completed the race. Cine stars Jackky Bhagnani and Neha Sharma presented awards for the best message, best dressed car, most popular team, best moment award, and the most empowering message.

2000 women drove to picturesque Lavasa from Mumbai and Pune on 22nd February 2014 for the 6th edition of the drive that celebrates the spirit of the modern Indian woman. The drive conducted in the Time-Distance-Speed format (TDS) witnessed intense competition among participants.

Speaking on the occasion, Anuradha Paraskar, Senior Vice President – Marketing and Sales, Lavasa Corporation Limited said,“The 6th edition of the drive is truly special. Lavasa Women’s Drive now holds the Guinness World Record for ‘Most female participants in a motor sport event’. The global recognition is a testimony of the new age Indian women’s zest to win and make a mark. It’s an inspiration for us too, as we build Lavasa, a planned hill city that will make India proud.”

Amitabh Bachchan, felicitating the winners said, “Lavasa Women’s Drive has reached a stage where it has received international recognition in the form of the Guinness World Record. So much has been talked on women empowerment in our country. I know it is very difficult for many groups to come together for such a noble cause. The recent case of Nirbhaya saw the coming together of people without any political lineage where the common man expressed his voice which was heard by the system. I partner UNICEF in their campaign for the girl child and the campaign for eradication of polio in India. After 8 year long fight, finally India is free from Polio. I do hope that campaigns like Lavasa Women’s Drive help eradication of the dreaded diseases like cancer.”

Devieka Bhojwani, Vice-President, Women’s Cancer Initiative -Tata Memorial Hospital, said ‘Lavasa Women’s Drive has seen 12,000 women participating in the campaign against the dreaded disease in last six years. We can create huge awareness by taking this campaign to new levels. Lavasa Women’s Drive has achieved an important milestone with a Guinness World record. There is another crucial milestone that we need to achieve which is the total eradication of cancer.”