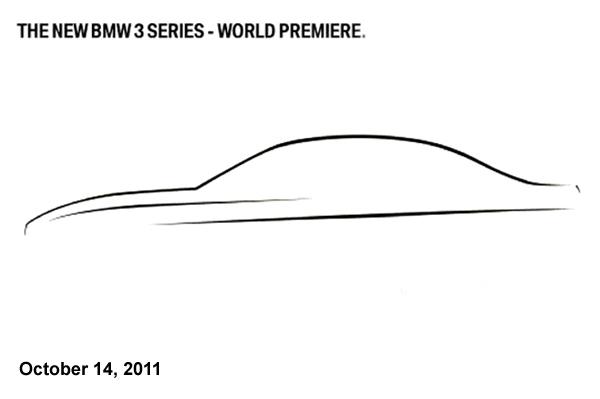 BMW is all set to unveil its all-new 3-series on 14th this month. This will be the sixth generation of the 3-series and as with the manufacturer’s norm of referring to its vehicle with a name reserved for official usage, the car is codenamed as the F30. In this day of social connectivity via Facebook, Twitter, Orkut and umpteenth social sites, BMW seems to have planned of taking the social networking experience to a new level. You will be surprised to know that the car’s unveiling in Munich will be broadcasted live on BMW’s facebook page.

BMW has revealed nothing but just a teaser sketch of the saloon’s outer shell. The Bavarian luxury car marque has plans for five further 3-series body styles: Touring, GT, coupé, convertible and GranCoupé. The latter three models will probably have to do without a 3-series nomenclature for sporting an all-new 4-series tag.

From what we know, the all new 3-series should be based a bit heavily on the latest 5-series in what can possible be an attempt  to provide BMW’s two popular models with a more familiar appearance.

Engines in all probability will be carried forward from the current model, albeit in a retuned guise for added performance and efficiency. BMW also has plans to set up a drivetrain plant in India and that will allow the carmaker to price the new 3-series more aggressively and make it more easier on the pocket than the already aggressively priced Corporate Editions.

The car will be showcased at the famous motor show at Detroit in 2012 and Indian sales are likely to commence soon after right-hand-drive versions become available towards the middle of 2012. Going by the aggressiveness of the auto maker in India one can safely expect the new gen 3-series to be out on Indian roads towards the end of next year.