Audi has fully unveiled the all-new Q8. The SUV is aimed to combine the best of both worlds by offering the elegance of a four-door luxury coupé and the convenient versatility of a large SUV. Remaining faithful to the dramatic styling of the original Q8 Sport concept first revealed at the 2017 Geneva Motor Show, the series production car is claimed to feature a generously dimensioned interior with a variable luggage compartment, state-of-the-art drive and suspension technologies and intelligent assistance systems that make it a convincing companion for business and leisure.

Upfront, the Audi Q8 debuts the new face of the Q family. Six distinctive vertical chrome fins make the radiator grille appear upright and solid. A wide mask connects the Singleframe to the LED headlights. For the headlights, Q8 customers can enjoy the benefits of HD matrix LED headlights fitted as standard. Each headlight unit consists of 24 individual LEDs. The taillight uses a three-dimensional design with its twelve segments – connected by the distinctive light strip. 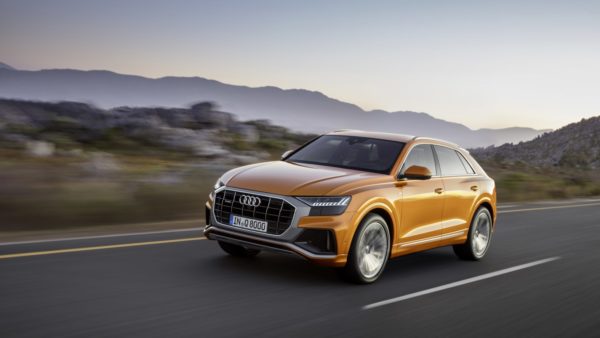 At launch, the Audi Q8 will be availabl with a 3.0 TDI (Q8 50 TDI) engine that generates 286PS of power and 600Nm of peak torque to the crankshaft. It accelerates the large SUV from 0 to 62mph in 6.3 seconds on its way to a top speed of 144mph. The transmission of forces is provided by an eight-stage tiptronic. A smaller three-litre diesel with 231PS (Q8 45 TDI) and a 3.0 TFSI petrol-engine car with 340PS (Q8 55 TFSI) will follow early next year.

The drive system in the Audi Q8 features a new mild hybrid technology (MHEV). It integrates a lithium-ion battery and a belt alternator starter (BAS) into a 48-volt primary electrical system. 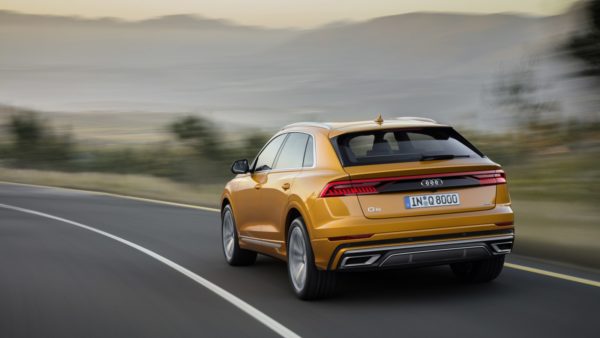 At 4,986 mm long, 1,995 mm wide and 1,705 mm high, the new Audi Q8 exudes a presence on the road like no other SUV from the brand with the four rings. With its coupé-style roof line it appears much lower than the Q7. It is 66 mm shorter, but has become 27 mm wider. The distinctive front end, the short rear overhang and the 21-inch wheels with a diameter of 795 mm paint a picture of powerful dynamics.

With a wheelbase of almost three metres, the Audi Q8 offers ample space for five people. The luggage compartment of the SUV holds 605 litres as a standard, which increases to 1,755 litres with the rear backrests folded down. The tailgate can be opened and closed electrically as standard. The electric luggage compartment cover is another convenience option. Guided on rails, it automatically retracts when the tailgate is opened and is extended again upon closing. 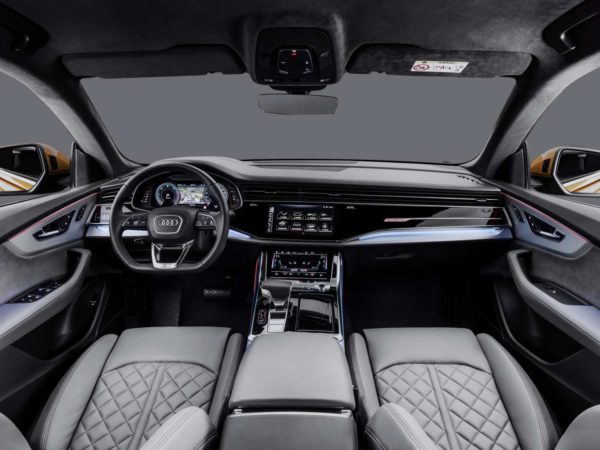 Features at a glance:

Read the official Press Release below:

Check out the full image gallery below: