Home News ‘All Is Well’ by 5 Idiots: A bike that runs on Air! 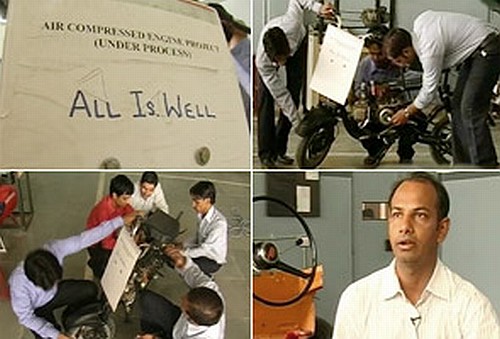 A wave of student suicides took place after the release of the super hit Bollywood film called 3 Idiots. Inspiration from the movie or just a co-incidence, no one can say! However, the movie hasn’t been useless as the message of new innovations has reached the youth through this feature film. The film popularized the 3 words ‘All Is Well’, and encouraged students to stop mugging up text books and start attracting practical knowledge and innovations to their very complex brains. Rancho (Aamir Khan) did this by creating the Virus inverter in the movie. A similar incident has taken place in real life where a group of 5 idiots instead of the filmi 3 idiots have devised a bike that runs on compressed air. They were so thankful to the movie, that they named their bike ‘All Is Well’ after the movie’s famous dialog.

The ‘All Is Well’ features a 2 stroke motor through which compressed air is forced, thus pushing the piston downwards. As this happens, the pressure drops and the air makes its way out through the exhaust ports. The piston gets back to its initial position due to inertia making it ready to repeat the cycle again. The drawback is that a high performance air compressor has to be attached to the bike at all times which poses a problem. But who says innovation has no limits? There is still scope to develop a bike that runs on a compressed air engine. The ‘All Is Well’ is a symbol of the changing technology in the world of motoring.

The bike can hit a top speed of 30 kmph and is totally emission free. If this bike becomes a reality and replaces our internal combustion engine driven set of wheels, the problem of fuel crisis will have a ready solution. The students are presently hunting for funds to develop this bike further and make it a usable vehicle.

Here is a report by NDTV on the same bike which was posted earlier: