German carmaker Audi has released the first teaser for the Q6 electric SUV. Showed at the company’s annual press conference, the computer drawing previews a future BMW X6 and Mercedes-Benz GLE Coupe rival that will be powered by an all-electric motor. The Q6 will employ a similar system to the R8 e-tron, but will, according to reports, have a range of 293 km on a single charge. The Audi Q6 will ride on the same MLB platform that underpins the Q7 and will feature a 100 kWh battery pack. 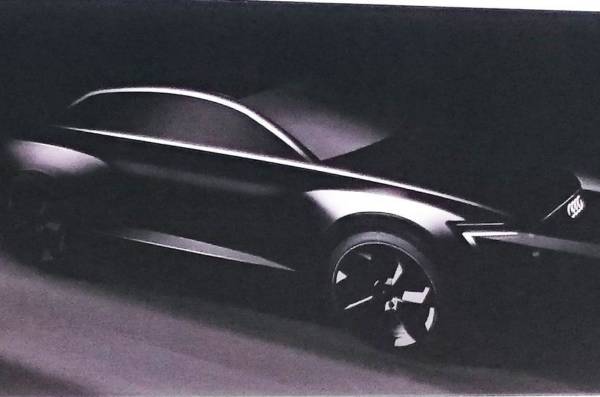 According to Ulrich Hackenberg, Audi’s R&D boss, in terms of design, the new Q6 will be heavily influenced by the Prologue concept. According to Autocar, the Q6 won’t arrive much before the end of 2017.

Hackenberg also said that the MLB platform had been designed to be flexible enough to accommodate a battery pack as well as plug-in hybrid and gas tanks for natural gas power. He also revealed that the next-generation Audi A4, which is based on the smallest version of the MLB platform and due to be seen later this year, will also come as a gas-powered version with the G-Tron moniker.

Meanwhile, Audi has reconfirmed again the production of the Q8 flagship SUV model. “The Q8 will come,” Hackenberg commented. “It will be something new, following designs established on the Prologue concept. It will be positioned as something more emotional and more sporty than the Q7. The Q7 will be a car for seven people, the Q8 will be more coupe-like.”