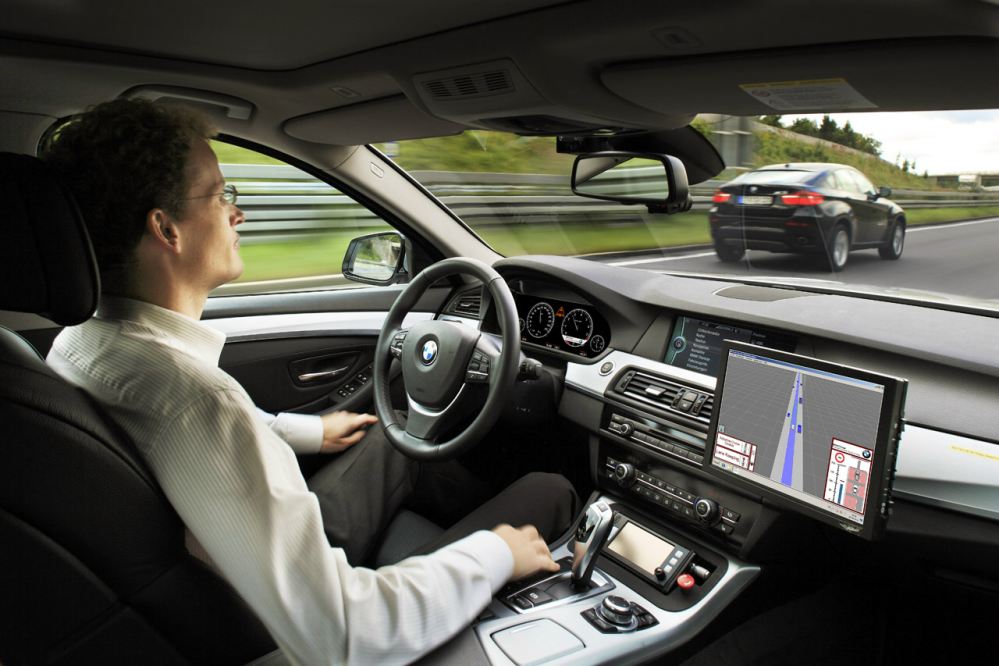 A few weeks back we showed you the Google Autonomous car project. The driverless car from Google has reached a very advanced state, where is can drive all by itself avoiding obstacles, accelerating, braking and steering without needing any human output. The system has successfully logged lakhs of kilometers without even a single incident reported.

Now BMW seems to be planning to follow the IT major’s footsteps. T%he company has started its testing on an indigenously developed autonomous system which would try and put the car in an auto-pilot mode. The research from BMW, however is still in a very early stage as compared to Google.

The test car for BMW is a 5-series. The system will be activated with the push of a button, after which the car will negotiate the traffic and road conditions all by itself. Being in an early stage of development, thing like entering and exiting highways, shifting lanes and tackling traffic is still a problem. BMW, however, are working hard on ‘teaching’ the car to manage the rigors of day to day driving.

While the effort is appreciable, we think it would be more prudent to wait a bit for Google, who are anyway planning to license their system to carmakers worldwide. Saves cost and doesn’t engage you in doing something which has already been done and mastered.

What do you think? Should BMW develop their own system from the scratch or wait and adopt the big G’s system? here are a few pictures of the new autonomous system christened ConnectedDrive, followed by the official press release

30.08.2011 – Munich. Motorway A9 from Munich to Nuremberg – and as usual – there is a high volume of traffic. But despite the stress of the situation, the driver sits calm and relaxed behind the wheel. Why? Because the car is highly automated, i.e. it brakes, accelerates and passes other vehicles on its own, while also monitoring and adapting to the prevailing traffic conditions. And the second reason why? Because Dr. Nico Kämpchen, Project Manager of Highly Automated Driving at BMW Group Research and Technology, has already completed nearly 5,000 test kilometres with his team. In order to offer drivers comfortable and safe vehicles in the future, equipped with the most modern assistance systems available, the engineers at BMW Group Research and Technology have been working for many years on the development of electronic co-pilots to support automated driving in specific situations – for example the BMW TrackTrainer tested on the race track, as well as adaptive cruise control (ACC) and the Emergency Stop Assistant. To further understand the potential offered by these systems, as well as their limitations, researchers are ready to take their next major step: developing advanced driver assistance systems for the motorway.

To accomplish this, researchers have equipped a BMW 5 Saloon with intelligent software as well as vision assistance and environment detection systems. The advanced automated assistance function for motorway journeys can be activated with the push of a button. From this point on, the prototype system can autonomously control acceleration and braking, and it can safely pass slower vehicles. One of the greatest challenges early in the project involved reacting to vehicles merging on to the motorway at exit and access points – but even this problem could be solved with a cooperative approach. The prototype system reacts to the situation by allowing the merging vehicles to join the traffic flow, and it can even change lanes giving the merging vehicles adequate space to enter traffic safely. This is possible up to a speed of 130 km/h, but in compliance with current traffic regulations regarding speed limits and such things as prohibited passing zones.

“This is an entirely new situation and experience for the driver – it is a strange feeling handing over complete control of the car to an autonomous system. But after a few minutes of experiencing the smooth, sovereign and safe driving style, drivers and passengers begin to relax somewhat and trust the independent system,” says Nico Kämpchen, Project Manager for Highly Automated Driving at BMW Group Research and Technology.” Nevertheless, the driver is still responsible for the situation at all times and must constantly keep an eye on traffic and the surroundings.”

To ensure that the automated research vehicle functions smoothly and with agility in real traffic, the car must be endowed with strategies to react appropriately in daily traffic situations. The basis for these strategies is comprised of two parts: first, pinpointing the position of the vehicle in its own lane is essential and second, the car must be able to clearly recognize all vehicles and objects in its nearest surroundings. This is accomplished through the redundant fusion of various sensor technologies such as lidar, radar, ultra sound and video cameras that monitor the environment around the automobile. Redundant does not mean “superfluous” – to ensure that the vehicle situation is precisely assessed, at least two different measurement methods must be used in every direction. In this way the developers at BMW Group Research and Technology can be sure that a potential weakness in one method is counterbalanced by the strength of the other method.

By accessing digital maps, the camera and the localisation data of the extremely precise GPS, the automated vehicle prototype can determine its location in its own lane, and it also receives exact information about the characteristics of the route ahead, including the number of lanes that section of the motorway has. This information is supplemented by data from the forward-looking camera integrated in the lane departure warning system. Objects in front of the vehicle are detected by the radar sensors of the adaptive cruise control system with Stop&Go function and by a laser scanner as well. The same is true for objects at the sides or rear of the vehicle.

Precursors and basis – the BMW TrackTrainer and the Emergency Stop Assistant.
The groundbreaking technology needed for automated driving assistance systems was developed by engineers at BMW Research and Technology in two pioneering projects that brought forth the BMW TrackTrainer and the Emergency Stop Assistant. The BMW TrackTrainer supports autonomous driving on competition race courses. With the precision of the localisation a safe and yet very dynamic driving style can be realised. The TrackTrainer is currently used in BMW driver training sessions to give participants a genuine feel for the racing line – they experience it behind the wheel and not from the passenger seat. With merged data from an exact digital map, along with GPS and video data, the TrackTrainer can autonomously guide a vehicle along the racing line of a complete race track for training purposes. The system is already in the second generation, featuring optimised and precise position localisation achieved by merging redundant sensors. The constant comparison of GPS and video data with the digital maps and internal vehicle data was used to automatically guide a vehicle around the legendary North Loop of the Nürburgring on 21 October 2009. Then on 25 May 2011, the BMW TrackTrainer performed a similar feat at the Laguna Seca Raceway in California, demonstrating that fast and dynamic automated driving is indeed possible.

“The main difference between the sessions at the rack track and trials on the motorway is that we are not alone when driving along a public motorway. That is why we were interested in learning about the developments in the Emergency Stop Assistant Project to ensure safety in our own undertaking,” explains Nico Kämpchen.

The emergency stop assistant prototype realized by BMW is yet another milestone in the development of automated functions for assisted driving. The system is part of the SmartSenior Initiative of the Federal Ministry of Education and Research in Germany which was launched in May 2009. The system incorporates innovative technologies for controlling and pinpointing the location of a motor vehicle and analysing the vehicle environment for added safety. If a driver loses control of a vehicle – for example due to a health emergency – the emergency stop assistant can detect the situation and autonomously take control of the car and bring it to a safe stop. The system activates the emergency flashers, carefully monitors traffic and guides the vehicle to the right shoulder of the road. Then an emergency call is automatically sent out to inform authorities of the situation, including information for emergency medical teams to ensure a quick and efficient response. This is all based on the Advanced Emergency Call function from BMW ConnectedDrive that is already available as a feature for production automobiles. This project served as the foundation for the environment recognition function that is used in automated motorway driving.

Automated future scenarios– Parking Assistant and Traffic Jam Assistant from BMW ConnectedDrive in the BMW i3 Concept.
Research will continue on automated vehicles equipped with advanced driver assistance systems in order to develop innovative assistance functions for the future. Examples are the Parking Assistant and Traffic Jam Assistant in the BMW i3 Concept. Since the BMW i3 Concept is primarily designed as an urban vehicle, it is equipped with functions that make parking easier and driving in congested traffic less stressful. The park assistant automatically parks the vehicle without any driver intervention. The car accelerates and brakes on its own, and shifts gears from forward to reverse as needed when difficult parking manoeuvres are required. The Traffic Jam Assistant helps drivers in rather monotonous traffic situations and congested areas, taking over so that the vehicle can “go with the flow” and the driver can relax. It maintains a safe distance between vehicles and automatically controls the speed and steering, and is able to stop the car if necessary. As long as the driver keeps one hand on the steering wheel, the vehicle can provide assistance in keeping the car precisely in its lane at speeds up to 40 km.

Automated driving on motorways provides important information and experience that is essential in developing technologies that assist in keeping vehicles safely on track, and this information will influence future strategies for advanced driver assistance.

“The next thing we want to ‘teach’ our prototype is how to deal with road construction sites and motorway junctions. Construction sites are a big challenge because they take on all kinds of forms, which makes detection, localisation and determining the right vehicle response quite difficult.” Nico Kämpchen and his team have plenty of work to do and are looking forward to finding solutions to these challenges as well.