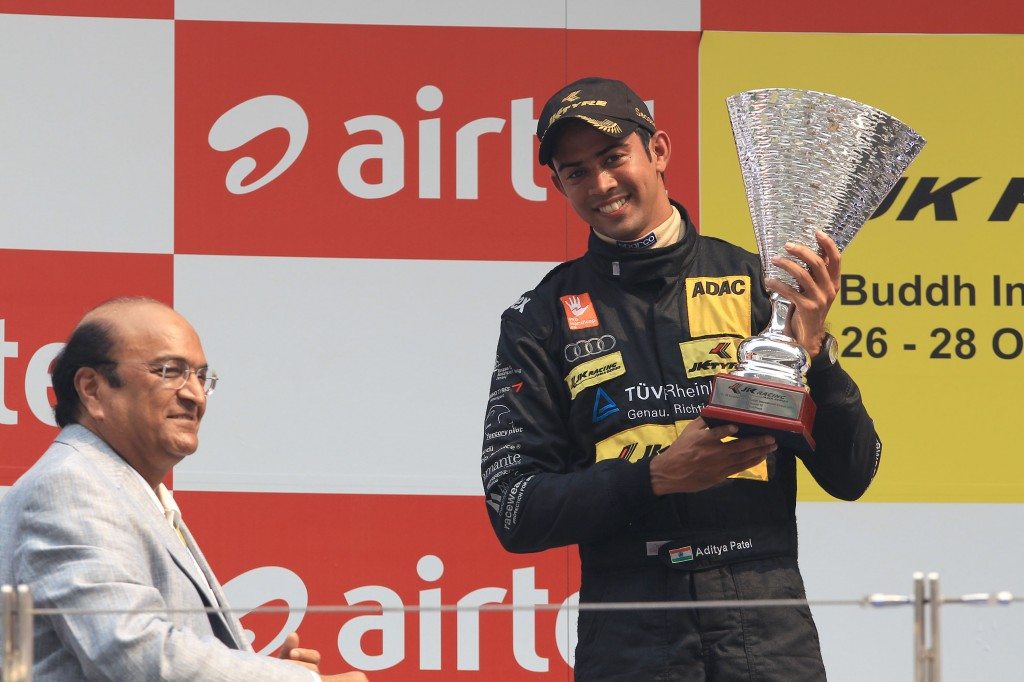 It’s a great feeling being on the podium here in front of my home crowd and to do it again today feels just brilliant”, said India’s youngest racing sensation and JK Tyre prodigy Aditya Patel as he stole the limelight yet again by finishing a fantastic second in Round 12 of the JK Racing Asia Series today.

Fellow Indian Akhil Khushlani impressed with his driving skills and finished seventh while Raj Bharath and Vishnu Prasad ended ninth and tenth respectively. Taken as a whole, it turned out to be a proud and outstanding weekend for India at the JK Racing Asia Series Round 12.

Continuing to drive like a dream and in the lead for a major portion of the race, the young US Formula Project driver Aditya bettered yesterday’s third place end by finishing second after starting fourth on the grid. “It’s such a hard race because on the first lap I fought with Nabil and Afiq. I managed to get past Afiq on turn 5, something I did not do yesterday. I realised last night what my mistake was and tried correcting it and it worked today and I got past Afiq there”, he said.

Aditya continued saying, “Afiq and Aston caught up with me in the slipstream and the race became a little bit tight. Fighting right through the race I ruined my tyres a bit early and I think after six laps I was sliding all over the place so it was really hard for me to keep Aston behind. Because we are teammates and the last thing teammates want to do is take each other off or something. It was the best I could do, I tried defending for a while but Aston was definitely quicker so no point really doing anything stupid so second is pretty good”.

Aditya’s battle-filled Round 11 and 12 performances and twin podium finishes after being away from racing for one year prove that he is a talent to watch out for in the coming season. He is one who has what it takes to be one of the best junior drivers in the world. It may be recalled that the Chennai based youngster recently created history by becoming the first Indian driver to win the gruelling 24 hours of Nurburgring.

Aston Hare cemented his Rookie Championship in style when he crossed the finish line first, ahead of Patel and Hidzir. Meritus.GP driver Afiq Ikhwan finished fourth after fighting hard despite losing power midway through the race while Nabil Jeffri, who led at the start of the race was given a drive through penalty for a false start infringement. He set the fastest time of the race with 1:59.479.

“After the first lap I actually didn’t get a good start again, it’s just something that I need to work on. I dropped down to fifth and after that I had to work past Earl Bamber and Afiq at the time, it really wasn’t that easy to be honest, I really had to fight throughout the race. And when the race came to an end, I didn’t even know I was first, I thought I was second. So when Antonio told me I was first I was just so happy, you wouldn’t understand. Especially straight after coming off an injury, something I didn’t expect”, said Hare.

“Before the race I had a long chat with my coach, Wesleigh Orr, and he told me, at the end of the long straight and into turn 3 just get the slipstream behind the other guy, can’t actually break much there, so push him a little to the inside and that actually played well into my hands.“I can’t wait to come back, definitely learning about the different cultures that’s here, it’s been quite an interesting experience” ended Hare.

16-year old Danial Hidzir is known to be able to push the more experienced drivers whilst staying calm throughout. After he finished a respectable third, he said, “It was a good race, I really enjoyed it. My first podium at an F1 event, it is an amazing feeling. I would like to thank my father, Century, Tan Wei Ron’s father for bringing me here and the trophy would make a nice gift for my mother who just got engaged yesterday. I’m sorry I couldn’t be there for her”.

Though Hidzir did not have a great start, he stuck to his position during the race not wanting to be very adventurous. “I had an okay start, it wasn’t really good actually to be honest. I don’t know why, probably because yesterday my throttle cable got stuck and I was afraid that it would happen again. I just held on to my limiter a little ‘nicely’. Then at turn 3 I had a collision with Akhil, I managed to overtake him. After that, I was just fighting with Earl Bamber for three laps, it was a really long fight. He was good, he knows how to stay ahead but I managed to catch him at turn 5 and progressively push hard. Then I caught up to Afiq, and kept progressively pushing after and I almost finished P2 but there wasn’t enough laps”.

Thanks to JK Tyre’s efforts, seven of the country’s young and most promising racers – Aditya Patel, Akhil Khushlani, Vishnu Prasad, Raj Bharath, Akhil Rabindra, Chetan Korada and Karminder Singh – got the opportunity to race in their home country in front of their home crowd. The series continues to cement its status as one of the world’s finest Junior driver development programs.

All of the five circuits that the series visited in 2012 are Formula 1 circuits which are crucial to driver development in preparing them for higher levels of racing. The JK Racing Asia Series is recognised by the World Governing Body for Motorsport, the Federation Intenationale De L’Automobile (FIA), as having special status that allows for young inexperienced drivers to participate on a National License. The reason for this is that the Series provides them with an Education and Coaching programme that teaches them all aspects of what it takes to build a career in motorsport.