Home News A car for blind drivers! Impossible is Nothing… 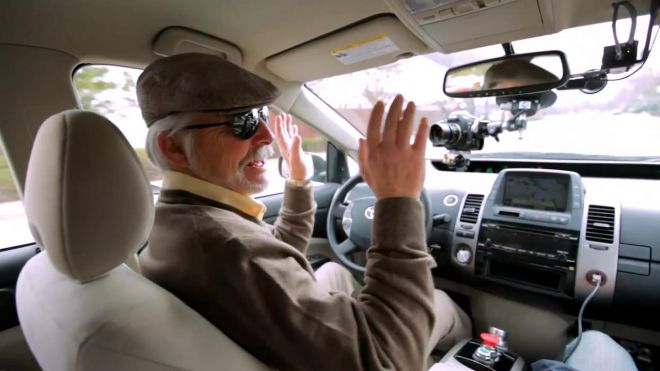 Ever seen a blind man easily driving a car? It does happen. Believe it or Not! Recently, Steve Mahan, with 95% blindness drove a car. Well, almost. Mahan got seated in the driver’s seat of a heavily modified car by Google and simply speaking, the car drove herself.

Mahan joked by saying.”Look ma, no hands. No hands, no feet… This is some of the best driving I have ever done.”

If you always thought that Google is merely a search engine then you are probably one of the most uninformed guys around. At least, I was. Until I heard about this project from Google that deals with developing self driving cars. Google had asked Steve Mahan to use one of the seven modified Toyota Prius it had readied for this project. “We organized this test as a technical experiment outside of our core research efforts, but we think it’s also a promising look at what this kind of technology may one day deliver for society if rigorous technical and safety standards can be met,” Google said. Google has claimed that these driverless cars have clocked more than 200,000 miles in testing on real road conditions.” The cars have been fitted with various sensors, including a spinning laser radar, and cameras that map the environment around the vehicles.”These sensors feed real-time into a quad-core computer, which can process 1.3 million laser measurements and make 20 driving decisions every second,” said the spokesperson. “The sensors help determine where other cars are and how fast they are moving. The software controls acceleration and deceleration, and mounted cameras read and interpret traffic lights and other signs.”

This project at Google is headed by Sebastian Thrun, an expert in artificial intelligence. Google has said that now that these cars have come so far, it is now working on the handling of the vehicle in severe weather conditions.