Home News A BMW TNT600i? This Benelli Almost Passes Off As An S1000RR!

Superbike kits installed on a more affordable motorcycle isn’t a new thing. We have seen many examples of humble motorcycles receiving humongous bodyworks of different superbikes, primarily the Suzuki Hayabusa. But when the custom bodywork is backed by inline-4 symphony, it becomes a sweet deal. The Benelli TNT600i was the most affordable inline-4 motorcycle we had and it needs a separate post if we had to describe the aural symphony it produced. The TNT600i featured here almost passes off as a BMW S1000RR, even though the latter being a much more premium motorcycle.

If you manage to witness it prowling on the streets, chances are you would mistake it as the litre-class Beemer too. The inline-4 growl disguising it even further. it gives away the disguise if you take a closer look and you really have a way around with superbikes. This TNT600i has received a custom S1000RR bodykit which includes as many as 16 parts comprising of side fairing, rear cowl, front bodywork and other tidbits. Even though the fit and finish of the bodykit doesn’t look as premium as found on the German superbike but when you consider the cost (only INR 48,000), it starts sounding pretty reasonable.

Also read: This Customized Yamaha SZ16 is Ready to ‘Scramble’ 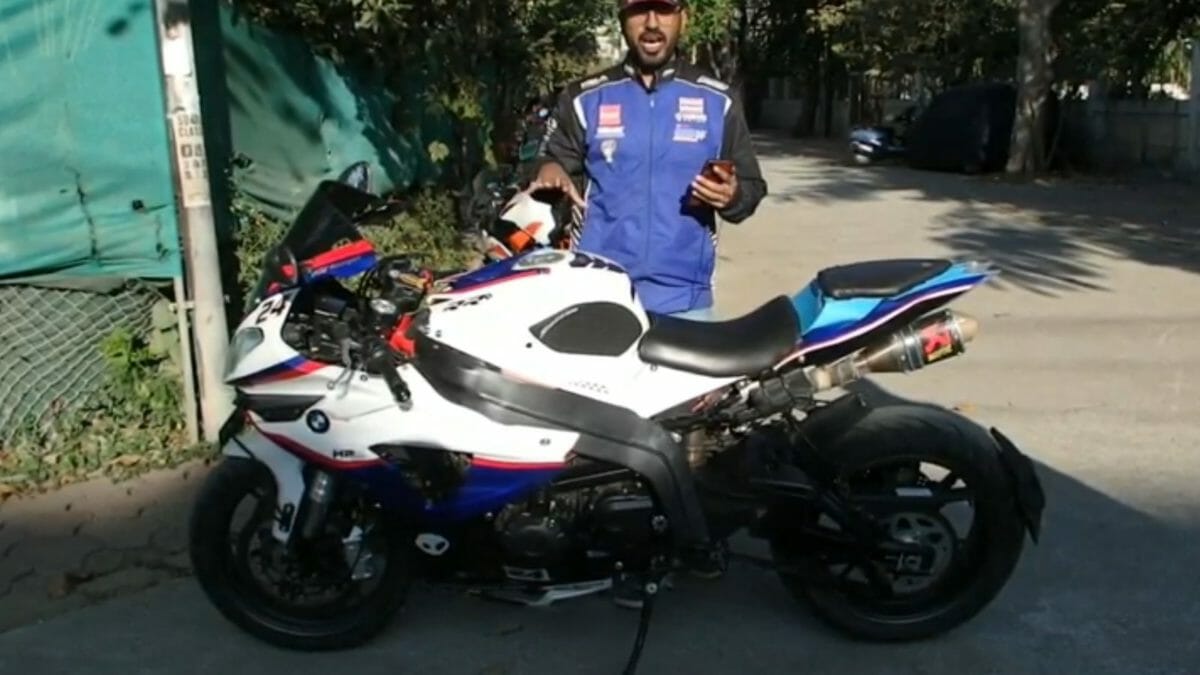 The TNT600i is a naked streetfighter and gets a wide handlebar for tackling the urban streets. On the other hand, sits BMW Motorrad’s pinnacle, the S1000RR which was developed to thrash lap records and features clip-on handlebars to facilitate the same. This customized TNT600i gets custom-made clip-ons which costed around INR 8,000-9,000. Other custom parts include seats, side mirrors and tank grips. According to the owner featured in the video, the whole bodywork can be uninstalled pretty easily if you wish to get back to the stock TNT600i.

One of the most prominent features of a Superbike is the chassis. While the latest BMW S1000RR makes do with a bridge-type frame, the TNT600i, gets a steel-tube trellis frame. Extra brownie points to the owner who went ahead to fabricate a faux unit of the chassis resembling that of the S1000RR and installed it on the TNT600i. We just wish that it could function like one too. BMW S1000RR like handling on a TNT600i? Middleweight streetfighter dream.

The overall cost of the whole customization process wouldn’t have crossed the INR 1 Lakh mark. That amount to transform your Benelli TNT600i into a BMW S1000RR, at least visually? We certainly won’t mind. And when you bring in the sweet inline-4 opera composed by the replica Akrapovic underseat exhaust featured here, our ears agree in unison too that it might pass as an S1000RR aurally too.

A few weeks back, we reported that the next 600cc motorcycle from Benelli, SRK600 was spotted in China. The bike has now been launched indeed but under a different brand name. The QJ SRK 600 is the same naked middleweight motorcycle which was previously referred to as the Benelli SRK600. The bike features a new look for 2020 and comes packed with some segment-first features like keyless ignition and backlit switches. It’s available in three variants — Standard, Medium and High.

Based on the Benelli TNT600i, the QJ SRK600 is powered by a 600 cc, inline four-cylinder engine mated to a six-speed transmission system. The fuel-injected engine is good for developing respective power and torque outputs of 81hp and 55Nm.