It doesn’t take a rocket scientist to conclude that motorcycles can go places where other vehicles find it difficult to reach. Their compact size, easy maneuverability, make it possible for them to penetrate remote locations. When the pandemic struck us hard, it was only a matter of time when motorcycles would rise up to the occasion. In the latest turn of events, the state of Tamil Nadu has included Disinfectant sprayer-fitted Royal Enfield motorcycles in their arsenal.

As part of Covid-19 prevention measures, the customized motorcycles would be used by Fire and Rescue Services personnel in congested localities there. Tamil Nadu’s Chief Minister K Palaniswami inaugurated the clean-up service on Wednesday and flagged off nine two-wheelers at his camp office marking the launch of disinfection work by the personnel.

Also read: Watch How Vehicle Sanitization Can Go Wrong And Know The Right Way To Do It 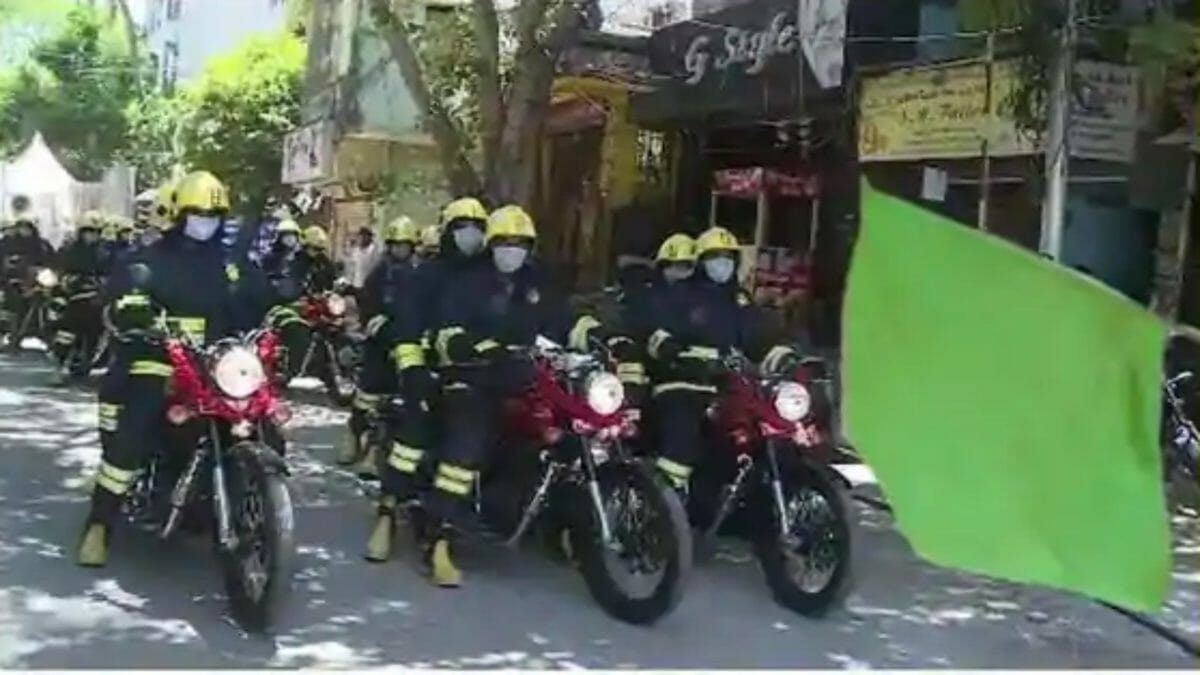 25 new Royal Enfield motorcycles have been purchased for the task and reportedly, after this turbulent phase ceases, the two-wheelers would be utilized for fire-fighting operations. They have been particularly assigned to the fire service department because it is one of the government departments who have been assigned the task of disinfecting the state and they have sanitized about 45,000 locations, including hospitals and markets.

There is no word regarding the modifications done to the Royal Enfield motorcycles to make them mobile disinfectant units but the first thing which differentiates them from the stock motorcycle is the custom paint job. The equipment, however, can be similar to that found on the TNRFS Royal Enfields. When it comes to reaching narrow lanes and other remote locations, these motorcycles are certainly better than other vehicles.

Motorcycles which are a part of the Fire Department’s arsenal, come with a 9-litre tank installed with a sprayer. The tank contains water mixed with foam to control the fire but in this scenario, the tank must be filled with disinfectant. The tank must have undergone some changes to suit the chemical properties of the disinfectant. Additionally, there is a public announcement system too, which helps in clearing the crowd or give them necessary instructions.

However, disinfectants must be chosen carefully because in the past we have seen how things can go wrong if you decide to sanitize your vehicle with an alcohol-based disinfectant. A video recently surfaced online which showcased a bike getting caught in flames in the process of being sanitized during the spraying of disinfectants upon it. It could have been easily avoided because the things which came into contact with the hot exhaust pipe, i.e. the disinfectants which probably contained high amounts of alcohol, or other such inflammable substances and with appropriate energy, which is heat, they could easily catch fire.

Going by the recent reports, with more than 25,000 cases, Tamil Nadu is the second-highest infected state in the country, after Maharashtra. The deployment of the above-mentioned motorcycles would certainly help in improving the situation a little. With their ability to penetrate narrow lanes, these mobile disinfectant units are no less than a boon.