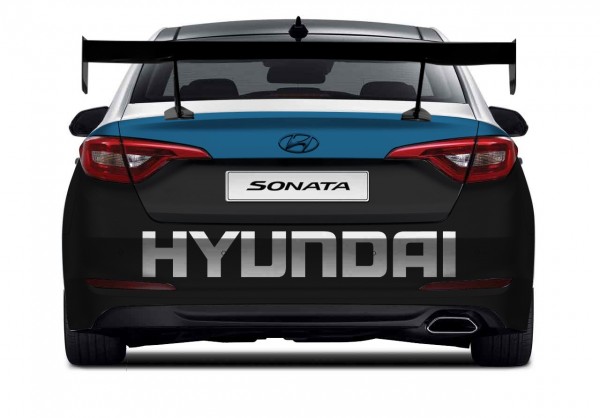 A 708HP Hyundai Sonata is in the works at Bisimoto Engineering, which is to grace the floors for this November’s 2014 SEMA show in Las Vegas. It might sound unreal, but Bisimoto confidently terms their latest project as the “most-powerful Sonata ever”- with a power rating like that, there’s no reason to believe otherwise.

The 2015 Sonata’s 2.4-liter inline-four cylinder engine was heavily modified to crank up a stratospheric 708HP- that’s a handful of horses more than the Lamborghini Aventador Lp700-4!

According to Bismoto- “a combination of strengthened internal components – forged pistons, connecting rods, a high-revving valve train and camshafts – a high-boost turbocharger, and a fast-burning, flex-fuel diet” account for this power figure, while a six speed manual gearbox strains to put all of that down. It’s still not clear whether this bonkers Sonata carries on with its front wheel drive layout or ditches it for a more apt rear wheel drive setup.

“Outrageous power is nothing without reliability, and it was a firm goal to retain the reliability that Hyundai is known for,” said Bisi Ezerioha, owner and chief engineer, Bisimoto Engineering. “After hundreds of hours of testing, failure analysis and prototyping, 18 new products will be engineered and produced in house to produce 708 horsepower from the Sonata.”

Visual upgrades to the car include a custom laminated body wrap and graphics, complete with an aero kit, a massive rear wing and 18-inch alloys, plus a host of interior goods such as racing harnesses and tell-tale gauges.

Stay tuned for more on this mad hatter of a Hyundai.