FCA just plonked the Dodge Hellcat’s 707 HP V8 engine, all of it, into the Jeep Grand Cherokee. The result, as you might have guessed, is one mad hatter of a SUV. The new Jeep Grand Cherokee Trackhawk, as it is called, will sprint from a standstill to 100 km/h in a mere 3.5 seconds and obliterate the quarter-mile in 11.6 seconds. That makes it the quickest production SUV (non-electric) on the planet, clinching the Bentley Bentayga’s title. 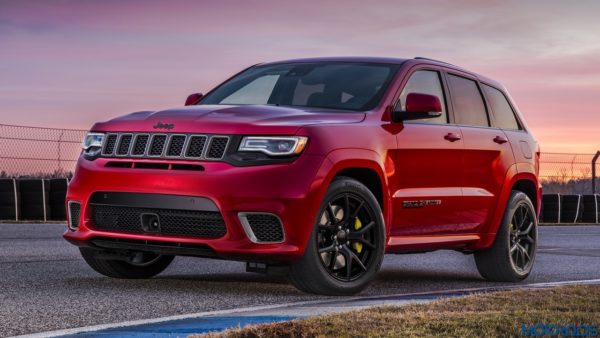 Unrestricted, the Trackhawk will do almost 290 km/h. By then however, the big Bentley will nudge ahead to its top-speed of 301 km/h, retaining its title as the fastest SUV on earth. The Jeep’s mind numbing figures are more hard to grasp given its weight. Although no official figures are out yet, the Trailhawk weighs considerably more than the 2.4 tons its SRT cousin tips the scales at. Apart from the aforementioned 707 HP, the supercharged 6.2-liter Hemi V8 engine in the Trailhawk makes 875 Nm of torque. 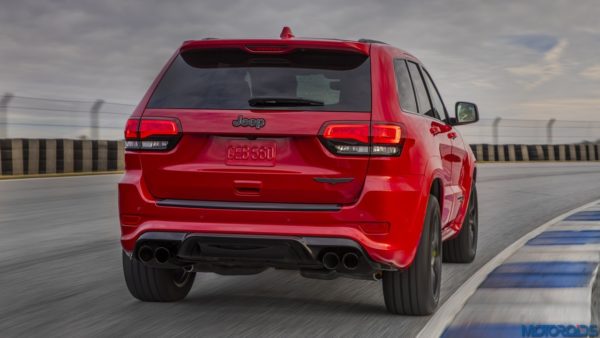 Power is sent to all four wheels via an 8-speed automatic transmission and an all-wheel-drive system. To cope with the extra poke, Jeep has beefed up the transmission, fitted forged chain sprockets and a wider chain in the transfer case, fortified the rear driveshaft and half-shafts, and tweaked the rear differential. The Trackhawk comes with a Torque Reserve launch-control feature that briefly holds the supercharger bypass valve open while cutting spark and fuel to specific cylinders to limit torque before the brake is released. 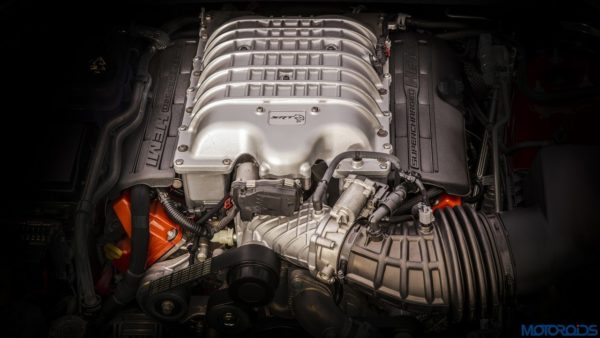 Driving modes in the Grand Cherokee include normal, Sport, Track, Snow and Tow. Owners can tow up to 3.26 tons, which is mighty impressive for a performance oriented SUV. Other go faster hardware include bigger Brembo brakes, a high-performance suspension with adaptive Bilstein shocks, 20-inch wheels wrapped in 295-millimetre wide tires, and an optional set of forged wheels that, according to Jeep, save 5.4 kg of weight. 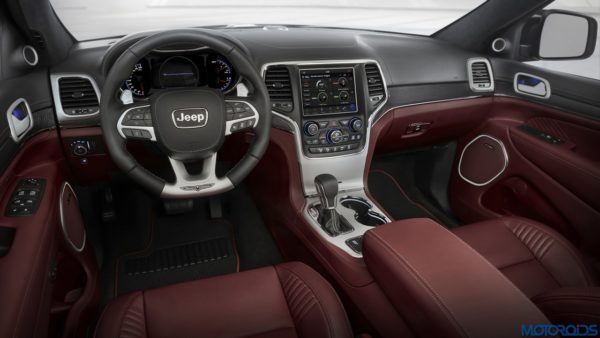 From the outside, the Trackhawk variant can be differentiated by the sportier bumper-work and tell-tale badges. Up front, the fog lamps had to go for better cooling, while the rear end gets blackened quad exhaust tips that look (and sound) the business. The interior also gets some subtle updates in the form of black chrome and carbon fiber trim adorn the inside, while cooled Nappa leather and suede front seats are standard. Equipment on offer include a panoramic sunroof, matching red seat belts, and an 825-watt sound system. The infotainment screen also shows “Performance Pages” with timers, gauges, and driving settings.