In an attempt to make its stand loud and clear message about the consequences of importing vehicles illegally in the country, Philippines President ordered the destruction of 68 cars and seven motorcycle worth £4.26 million (INR 38 crore). Philippines President Rodrigo Duterte was present during the destruction of luxury sports cars and motorcycles that were smuggled into the country and seized by the customs.

The vehicles were crushed at Sta Ana, Cagayan, in northern Philippines. Watch the video below:

In a speech before the destruction, President Duterte said, “I did this [destroyed illegally imported cars] because you have to show to the world that you have a viable place of investment and business. And the only way to show it is that you are productive and that you have the economy, to absorb the productivity of the population.”

The list of cars included exotic brands like Lamborghinis, Mustangs and Porsches. As many as 800 contraband cars and motorcycles were seized by port authorities in Cagayan, and the vehicles destroyed in the video are part of those illegal imports. 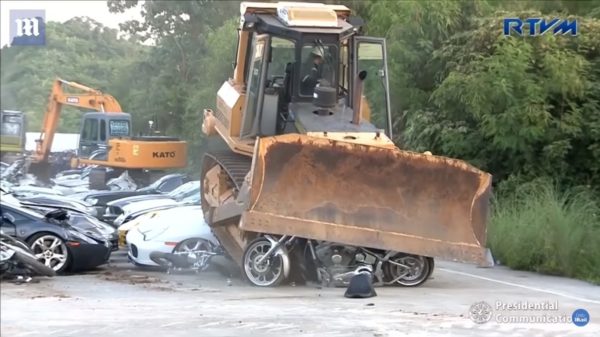