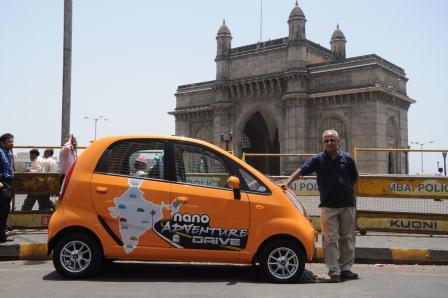 I have always said this and it, yet again, has been proven. The Motoring bug bites regardless of your sex, age and the amount of Vitamin M you have in your bank. This time, a Kochi based auto enthusiast, Thomas Chacko, aged 62 years, recently left for a 25,000 kilometres drive in a 2012 Tata Nano. The expedition should last 80 days and his drive will see him having a brief rendezvous with all the state capitals. Also, he will make it a point to touch the 4 corners of the country- Kanyakumari in the south, Dwarka in the west, Kargil in the north & Kibithoo in the east. He will also drive on the highest motorable road of thw world that passes thru the Khardung La and Chacko will be also seen driving on the streets of Nagpur, geographical centre of India.

Thomas Chacko says, “I have chosen the Tata Nano for this journey because it is a car that has put India on the world motoring map. Despite being the lightest car, and having the smallest engine currently in production worldwide, the Nano can take on every kind of road, especially with its clearance of 180 mm. I have driven a Tata Nano for almost 900 kms across cities and towns and also to Munnar, which is 5,000 feet above sea level. I am now convinced that the Tata Nano will go wherever I take it on my trip.”

In the past, Chacko has been a part of several motorsport events. He has also been a live spectator of F1 races at Malaysia, Singapore and Monaco. Chacko has driven in Canada, Malaysia, Oman, Singapore, Sri Lanka, UAE, UK & US of A.