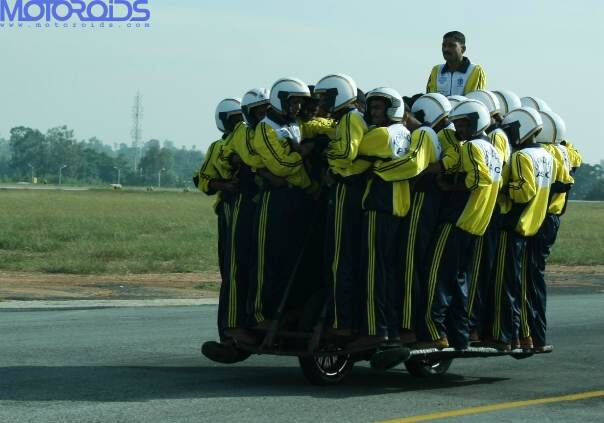 This is one world record that many daredevil motorcyclists jostle for every year – the record for maximum number of people on a single motorcycle. The record has been surpassed, and the good news is, the bike bearing the load of those 54 hefty men is one of our very own Royal Enfields, a Bullet 500cc with that archaic cast iron engine. Incidentally, the earlier record was also held by an RE motorcycle.

On Sunday the  28th of Nov 2010, The Army Service Corps motorcycle display team called the “Tornadoes” successfully mounted 54 people on a single Royal Enfield 500 cc motorcycle and rode for a distance of 1100 m (1.1 km) at the Yehlanka Air Force base in Bangalore. This attempt surpasses the earlier attempt set by the CMP which was 48 people on a single motorcycle (again, on an RE, as stated earlier) . There were no modifications carried out to the engine of the motorcycle for this attempt.

Says a lot about the strength and load hauling capabilities of this machine, doesn’t it. Congratulations to the Tornadoes, and to Royal Enfield for the feat!