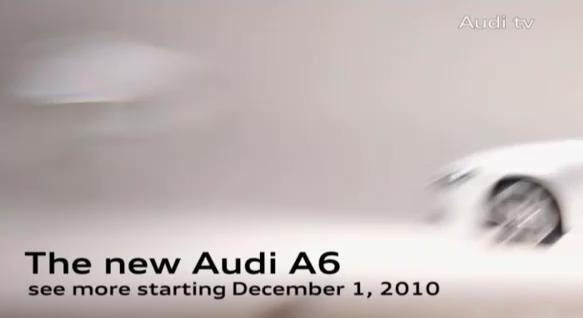 Audi has released a teaser video of its 2011 A6 sedan which will take on the formidable E-class and the ominous 5-series. The new sedan will primarily be based on the design cues drawn from the A7 Sportback which looks chiseled and angular, as an aberration from the traditional Audi design language. The A6, as we would like to assume will be the A7 Sportback with a boot. And that, we assure you cannot be a bad thing as even with those angular lines, the A7 Sportback is one hell of a handsome (and charismatic) car.

The video does not reveal many details, but if you pause it every shot which is relatively less smudged, you get to see a few details. The new Audi A6 will be a very important car for the German carmaker, as it sells in big volumes.

Engine options for the new car will include a 1.8 litre and 3.2 FSI engine + a 3.0 TFSI gasoline. There will be two V6 3.0-litre TDi diesels and then there will be smaller diesels for other markets (read India) as well. Quattro will be available as an option across the range. Transmission duties will be taken care of by a 6-speed manual, a 7-speed S Tronic (DSG) and an 8-speed auto, based on the engine you choose.

A top of the line S6 will see a big-ass V8 being plonked under the bonnet while the crazy RS6 will be developed by Quattro later to take on the might of the AMG and the M-division later.

Audi is expected to release more pictures of the car soon, and we will update you with them as soon as we get them.