As you must have already read in our previous report, Yamaha launched its much awaited motorcycle, the third generation R15, in Indonesia in the presence of Movistar Yamaha MotoGP riders Valentino Rossi and Maverick Viñales. This time around, we have a detailed image gallery of the motorcycle along with complete technical specifications of the new YZF-R15, courtesy Indonesian motoring portal TMCBlog. 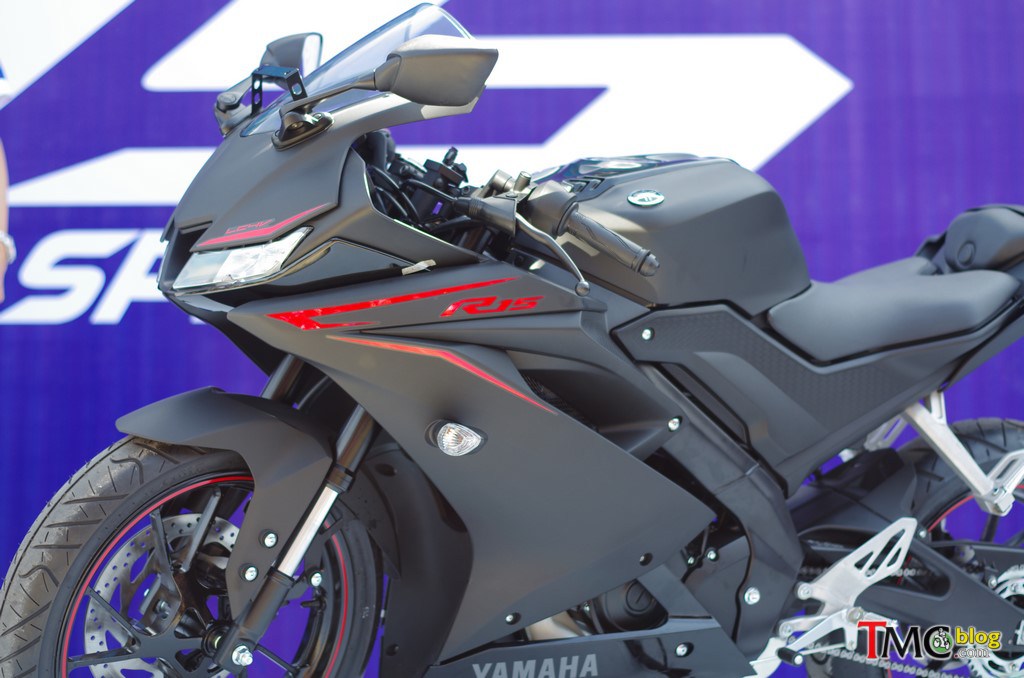 Visually, the new 2017 Yamaha YZF-R15 gets a sharper design. It draws styling cues from the current generation YZF-R1, especially at the rear. We’ll get there in a bit. The latest iteration of the motorcycle continues to use Deltabox frame. Upfront is a sleek, yet powerful pair of LED headlights. The conventional telescopic suspension upfront has been replaced by an upside own unit which should further aid the motorcycle’s handling prowess, especially around the corners. Behind the windscreen is the new, all digital instrument cluster which is pretty compact. We’d really miss the analogue tachometer though. 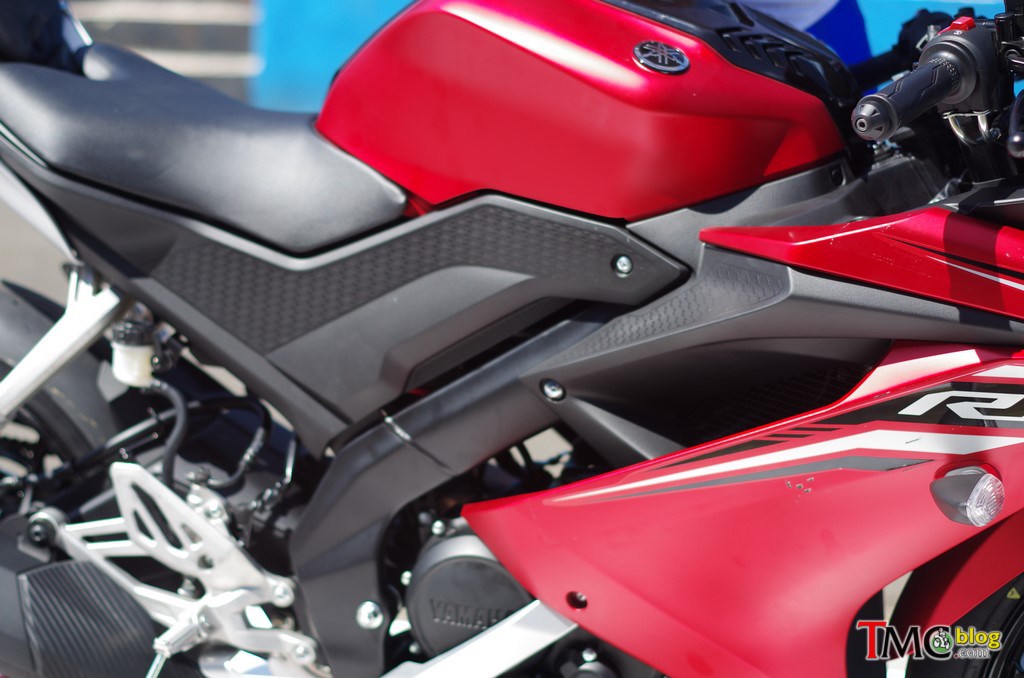 The fuel tank gets a dual tone finish which a black strip running on the centre top of the tank. The fins on the top of the fuel tank are heavily inspired by its litre-class sibling and the end result looks absolutely beautiful. The motorcycle continues to use a split, step-up seat design although it pillion saddle doesn’t appear to be as tall as the R15 V2.0. The rear of the new YZF-R15, as aforementioned, is heavily inspired by the YZF-R1. The LED tail light and the rear panels are near identical to the litre-class sibling and Yamaha have done a commendable job there. However, we were surprised by the absence of ABS. 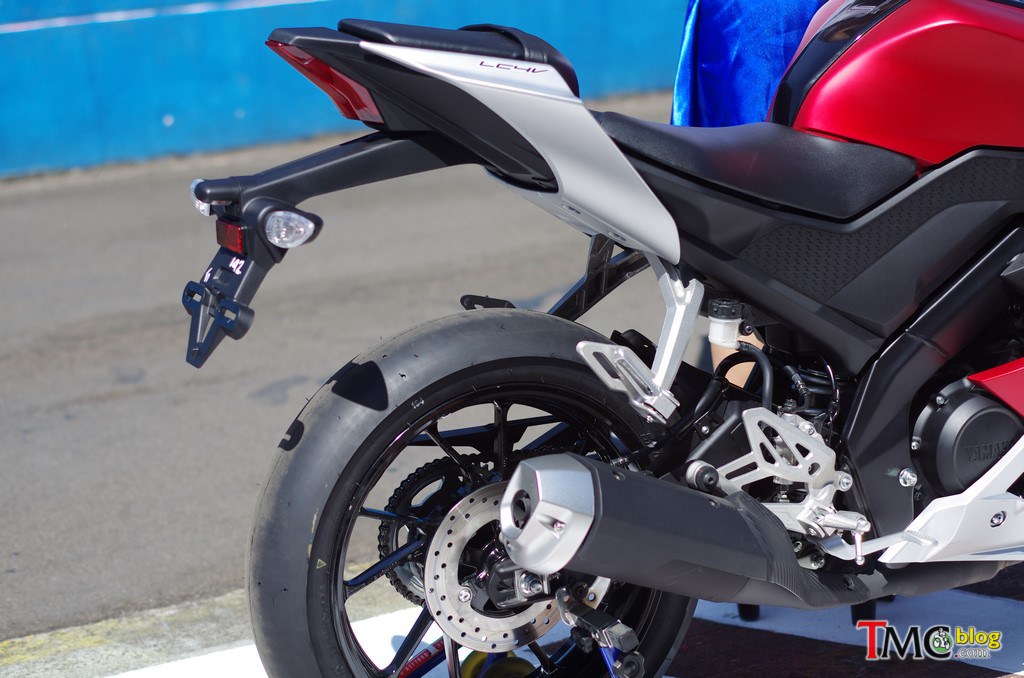 Mechanically, the motorcycle gets an all new 155cc single cylinder liquid cooled engine which is tuned to deliver a healthy 19.3 PS of power at 10,000 rpm and 14.7 Nm of torque at 8,500 clicks. The engine comes mated to a six-speed transmission and also benefits from a slipper clutch. 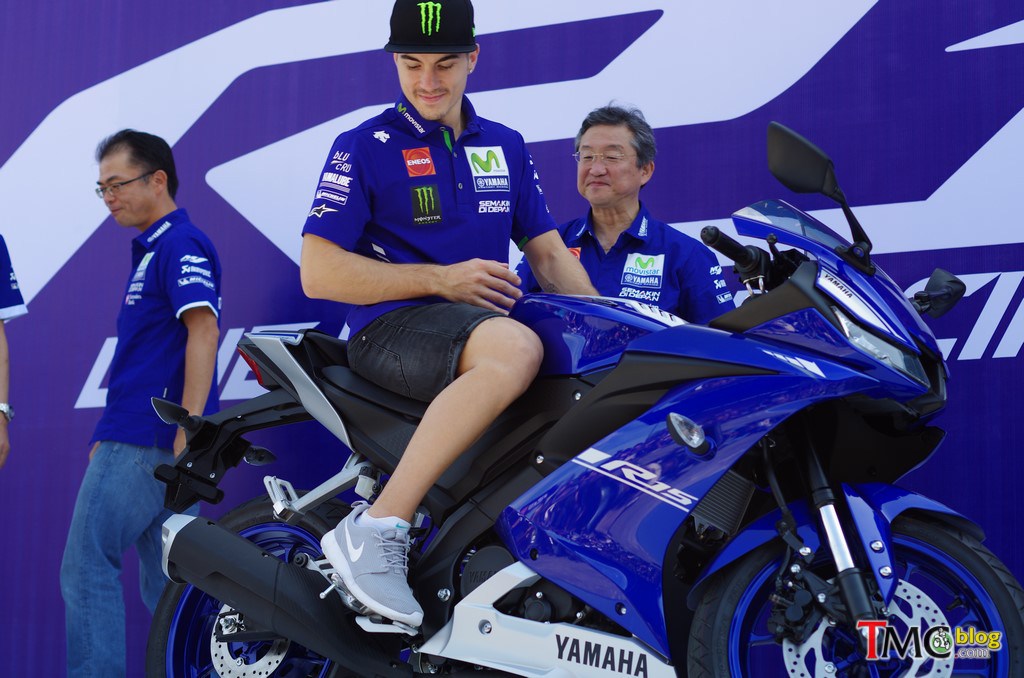 The new design with sleek LED headlight, the fins on the fuel tank and the YZF-R1 inspired tail will put a smile on the owner’s face, just like Maverick here 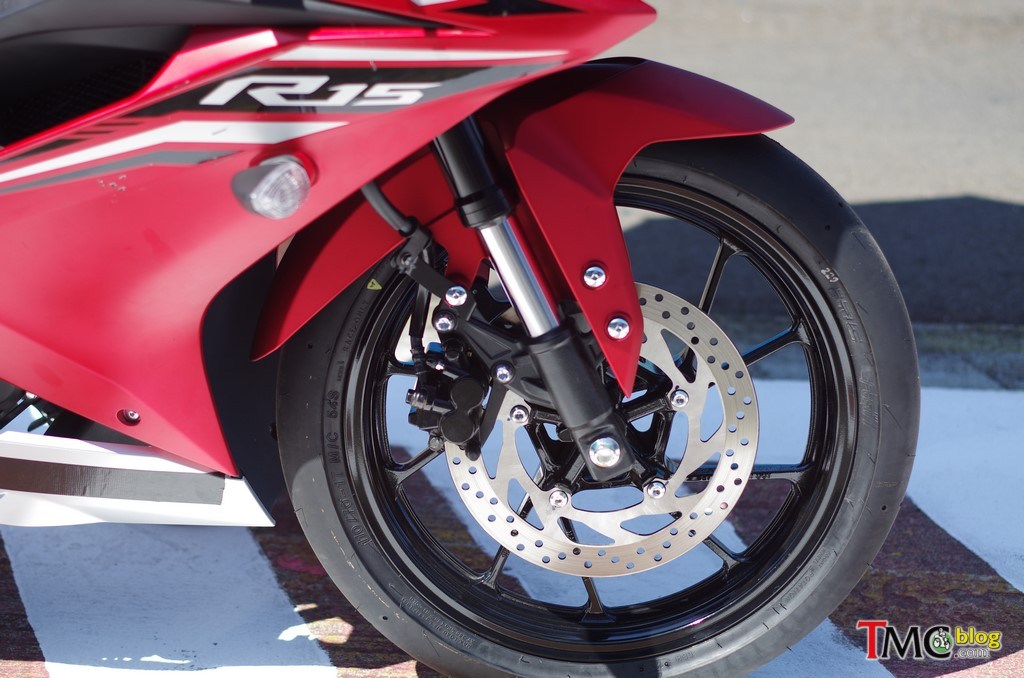 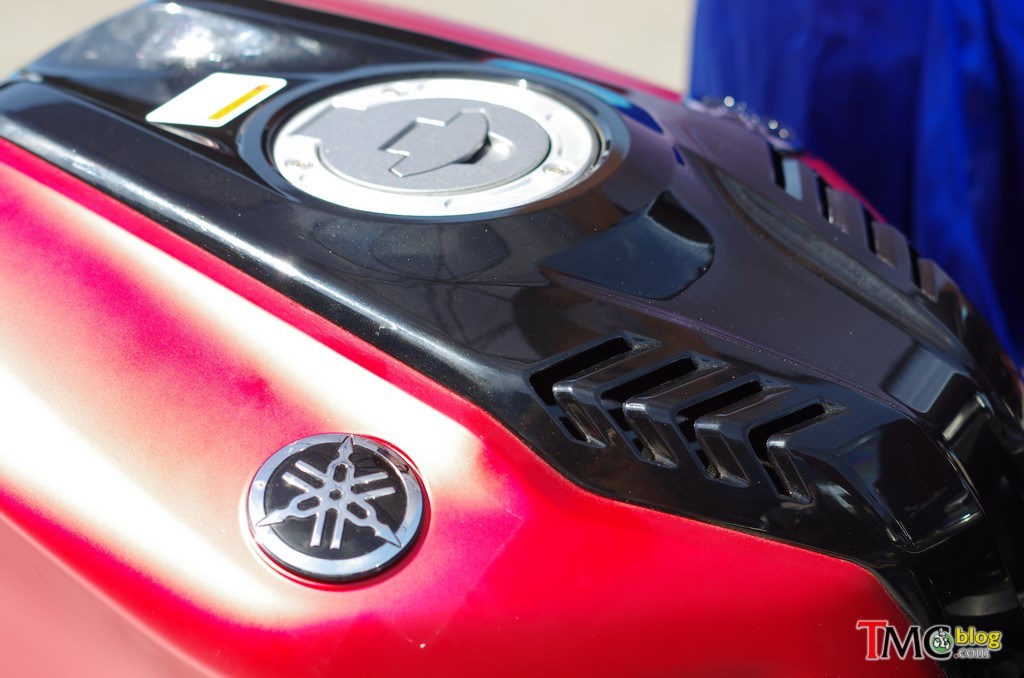 The fins inspired by the YZF-R1 are absolutely stunning 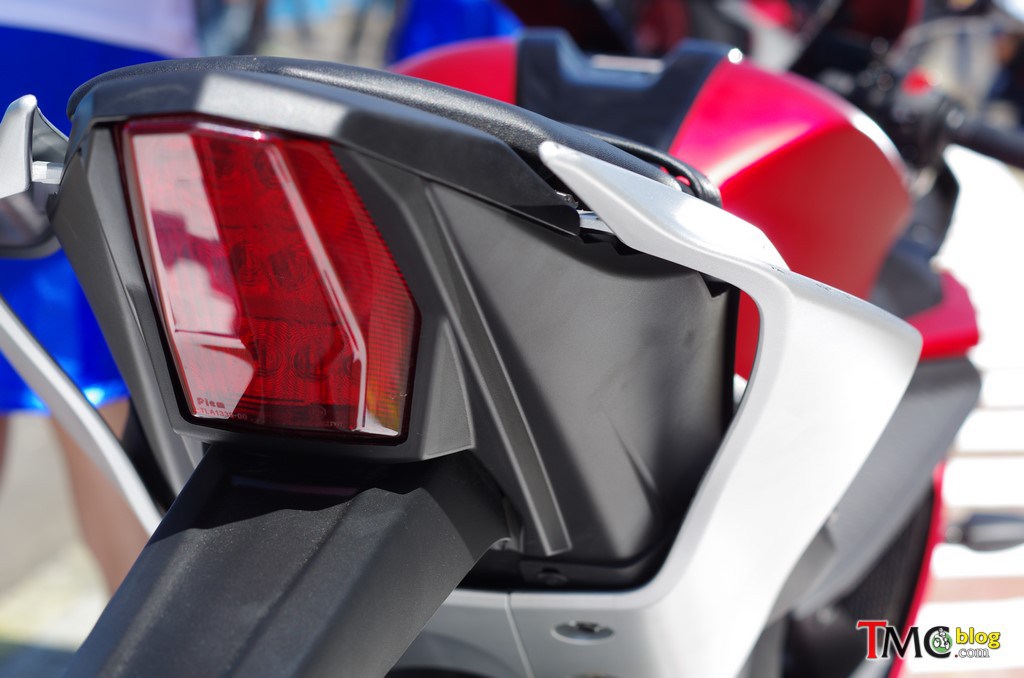 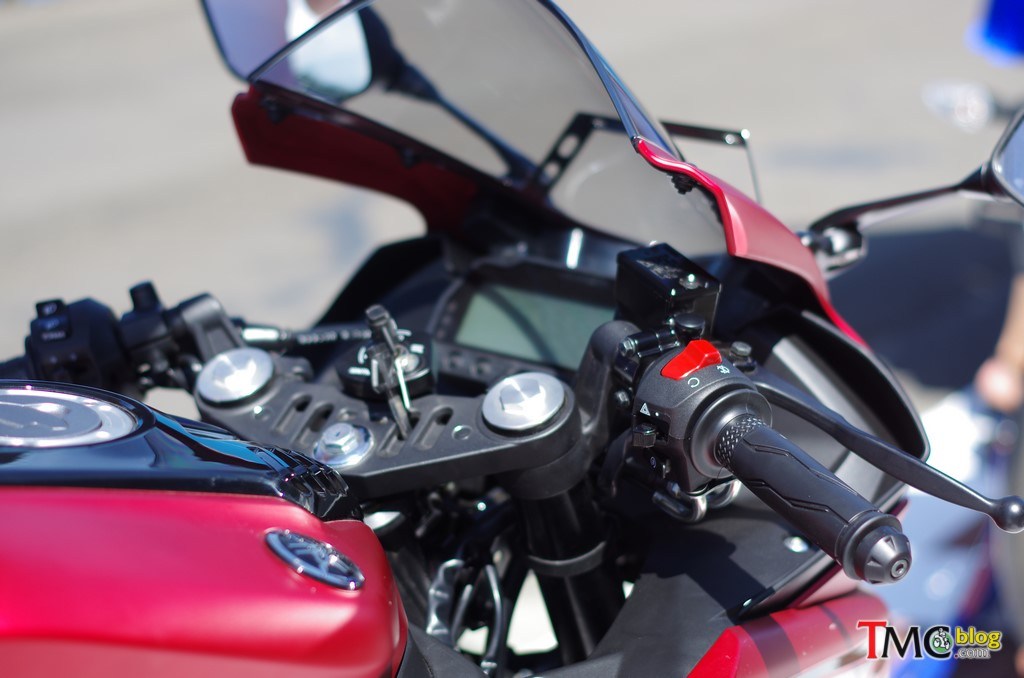 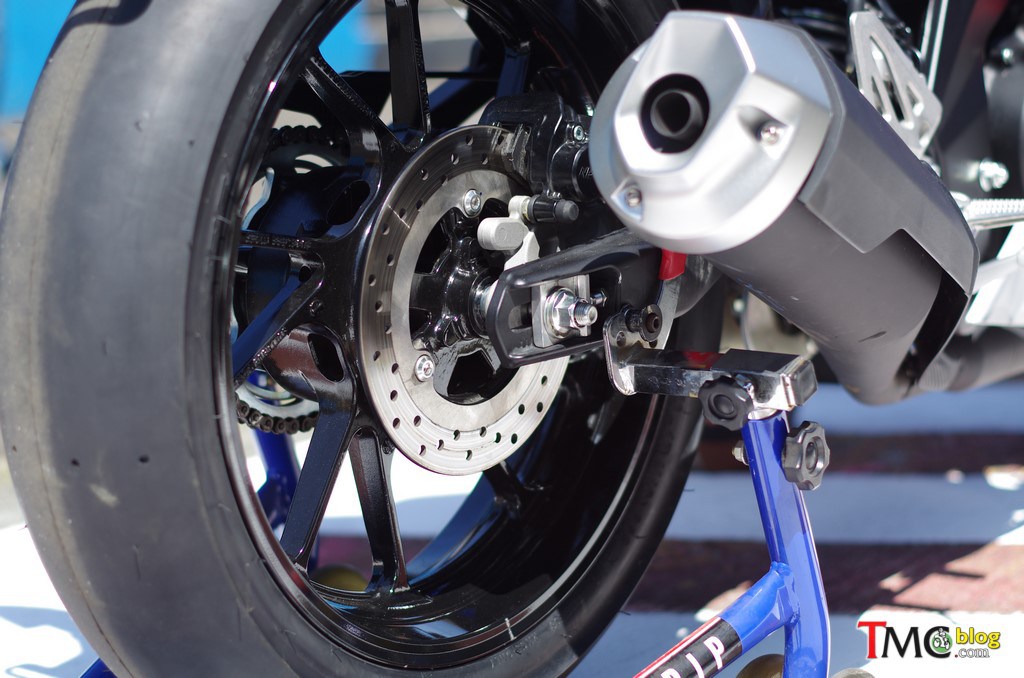 Surprisingly, the motorcycles showcased at the launch didn’t feature ABS. But we’re sure it would be available by the time these motorcycles reach other markets, including India

Pick a colour. We absolutely love the Racing Blue. If we were to select the black variant, we’d strip off those graphics for a stealth look

Check out the complete technical specifications of the new 2017 Yamaha YZF-R15 below: