They say that there are motorcycles, and then there’s Royal Enfield. Somehow, I always thought that the statement reeks of over-hype. So when Royal Enfield offered me a Thunderbird 500 to ride around for a few days, I decided to settle it once and for all. 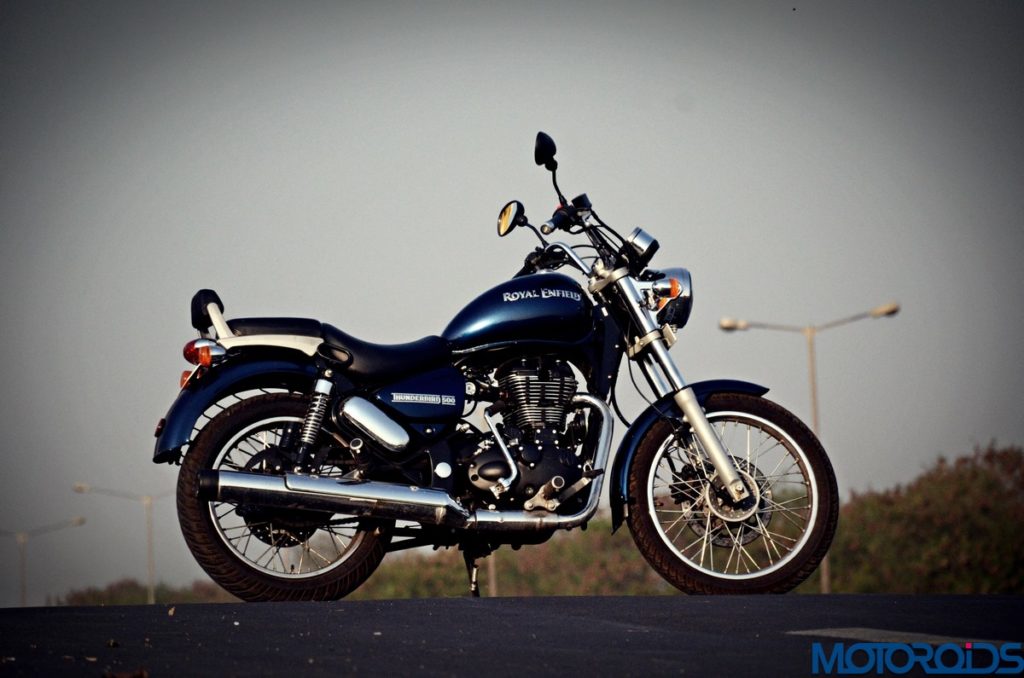 It looks great, the T’bird 500. Remember the wonky, original Thunderbird that looked like it was designed by someone who watched too many episodes of American Chopper, but had limited resources at hand, and a Bullet chassis too many?

Well, the new one changed it all. It still looked good when it came out in 2012, and it still looks good. It comes off as a proper cruiser now, with retro-futuristic details that, as I was about to find out later, hint at its character.

The chrome applications are just perfect, the stance is spot-on and hardware bits like the disc brakes blend effortlessly into the handsome profile. 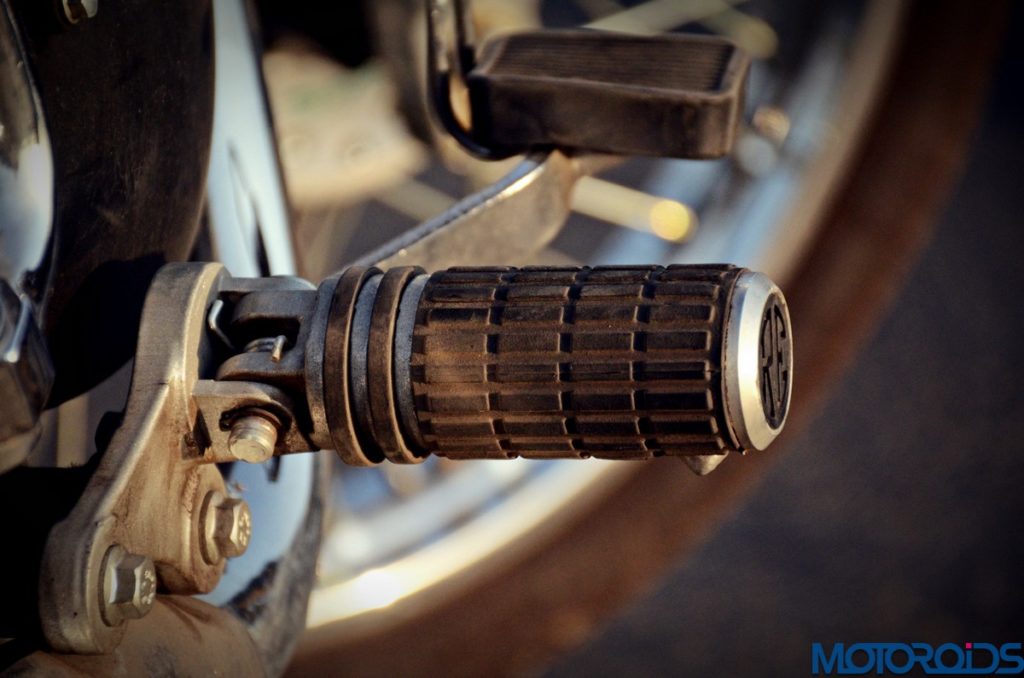 Ever seen prettier pegs than these on something this side of INR 2 lakhs? 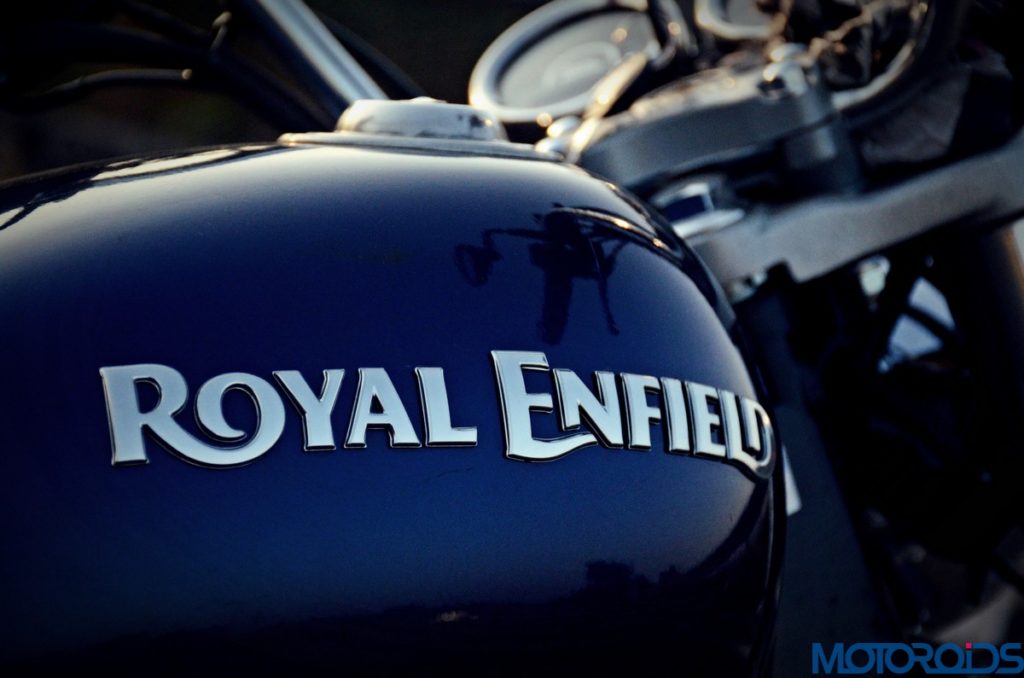 That off-set, retro-styled fuel filler cap is mega, and so is the paint quality. 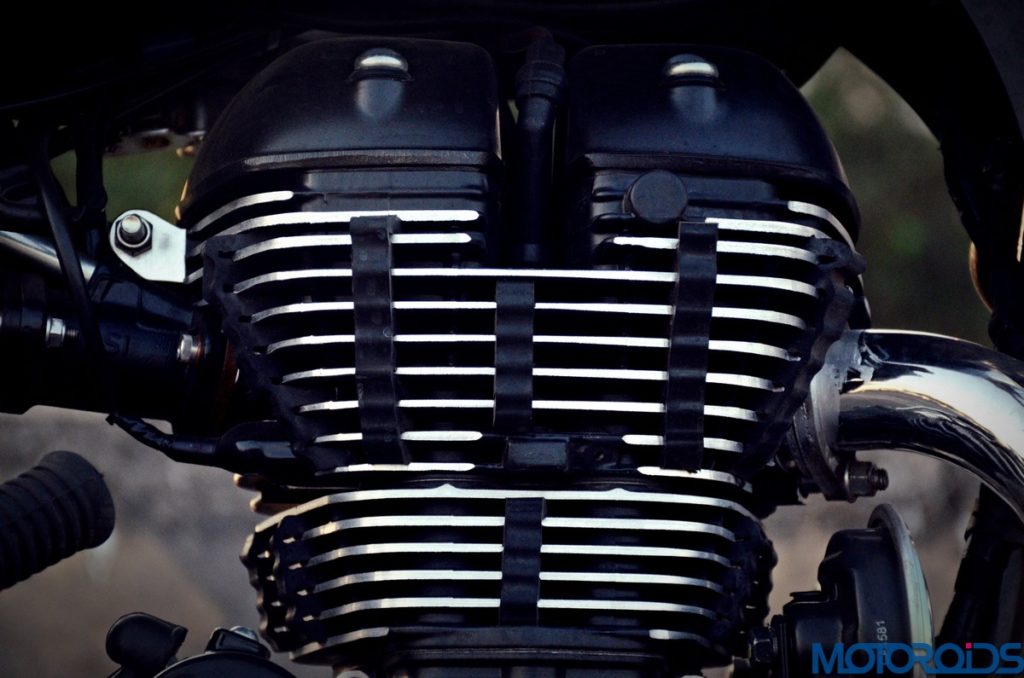 Lesson – how to add some contrast to a dark engine without making it look gaudy. 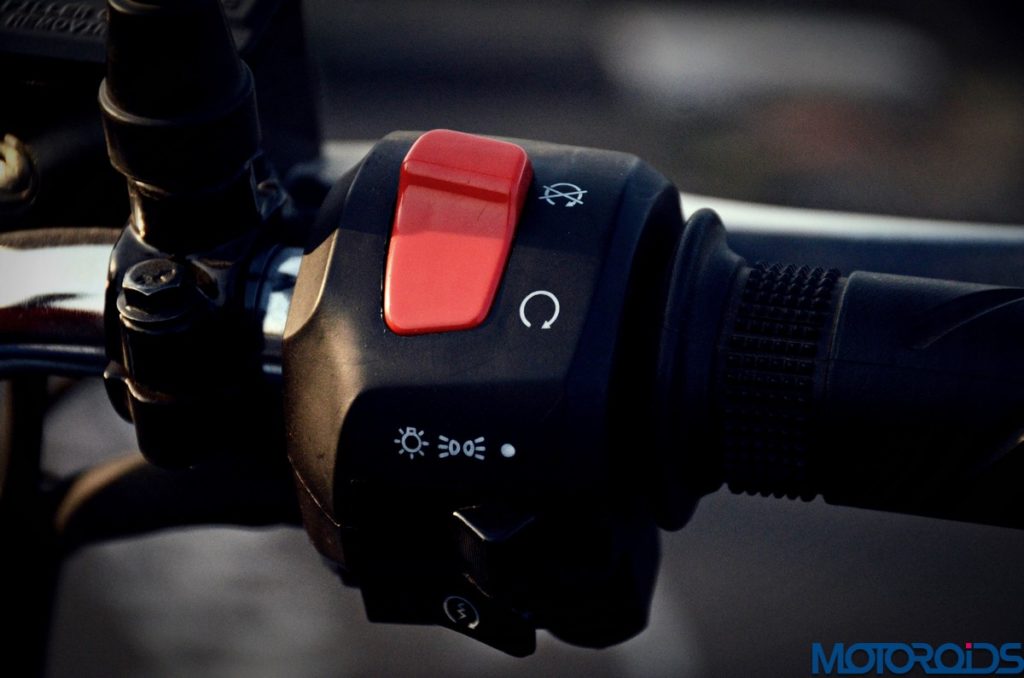 For its segment, switch-gear quality is of the highest order. 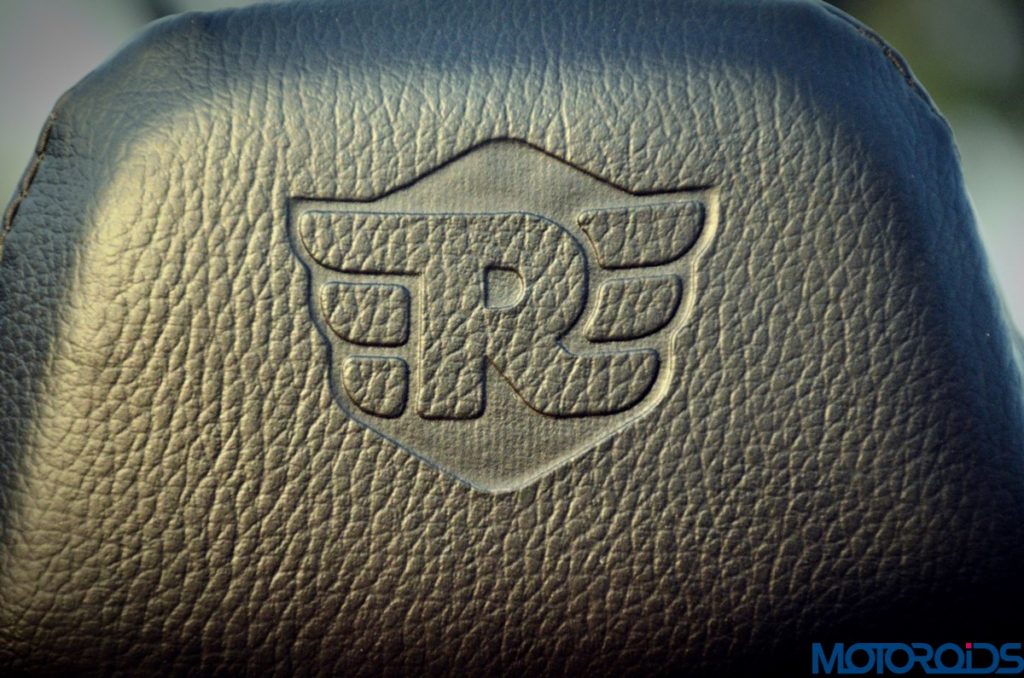 You’ve got to love the attention to detail. 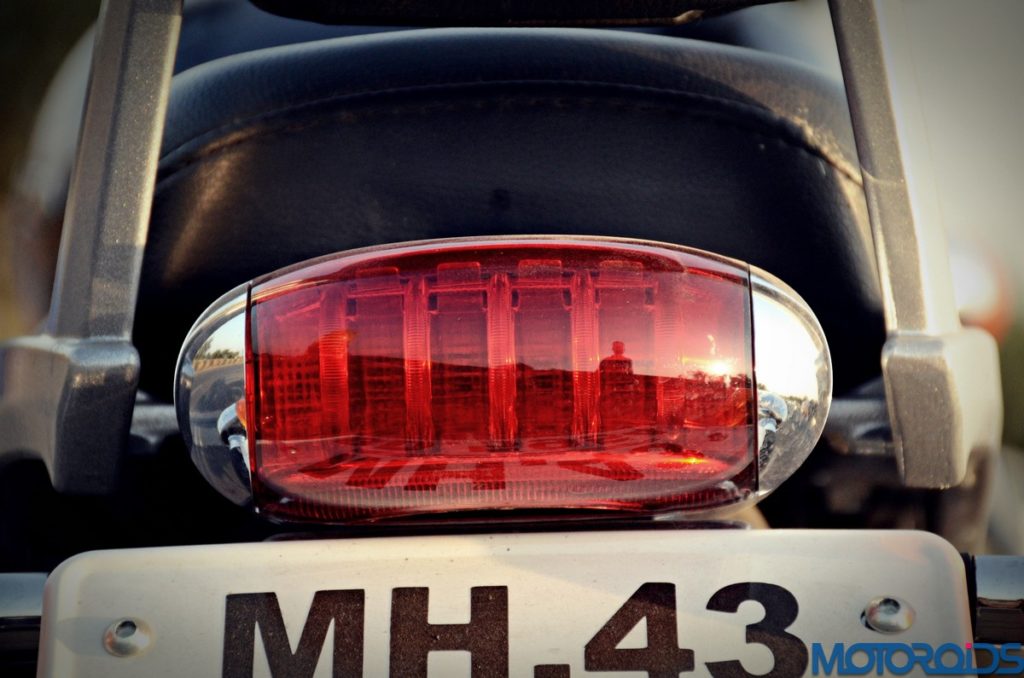 Adding an LED tail lamp to a Royal Enfield is like adding an electric drive-train to an Ambassador. 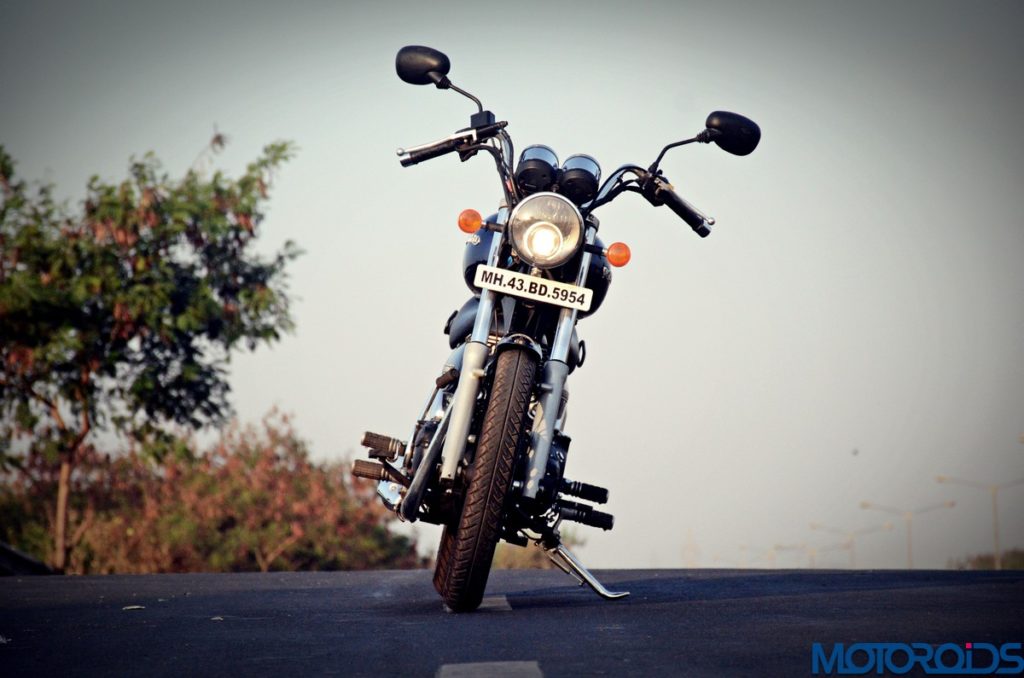 The LED ringed headlamp is powerful enough to take on the darkest of nights, but the beam spread is a bit sketchy.

But the problem with the T’bird’s appearance is that there are too many on the road these days. So nobody bats an eyelid at the sight of one. If you own one though, I’m sure you don’t mind staring at it more than usual. 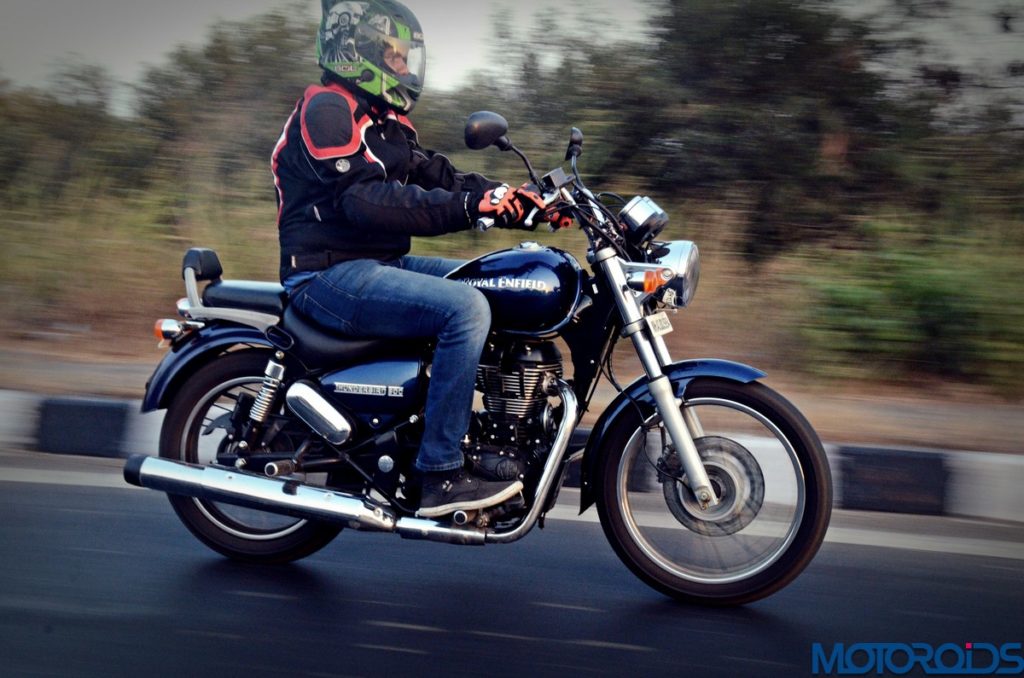 I found out that there’s something about the way it goes down the road. If I had to put it technically, there’ll be numbers and jargon involved, and I’d have to squeeze them inside this bubble called ‘Performance’.

But a RE isn’t about performance. It’s about the feels. So I’m not going to talk about engine speeds and torque curves. Instead, I’ll try to describe the feeling. And the long-stroke mill is at the centre of it all.

However, it all didn’t start well though: 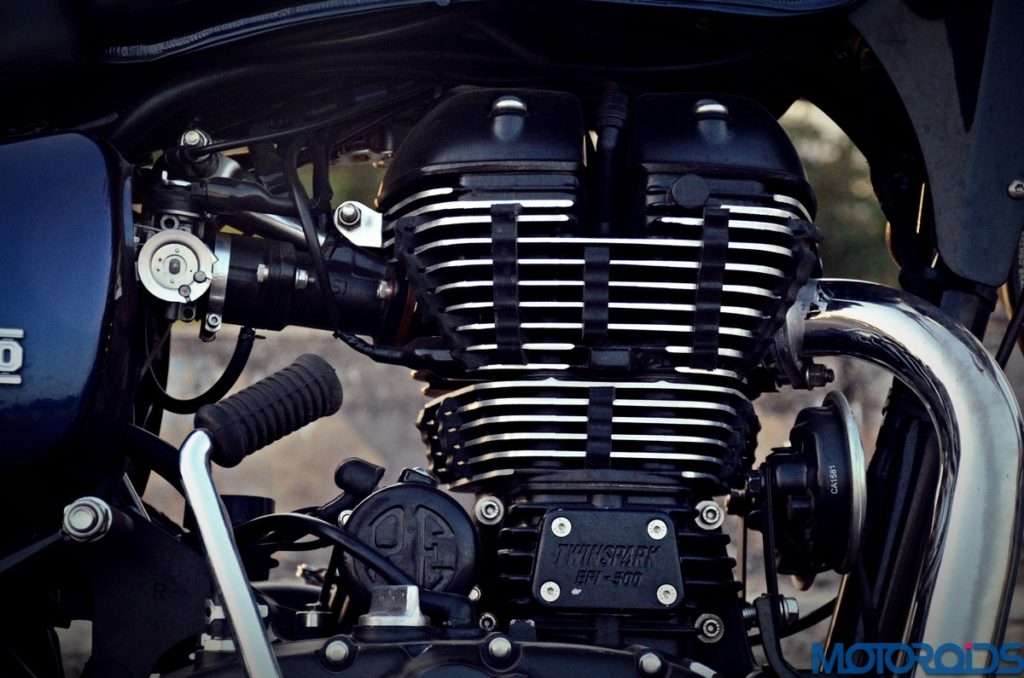 Crank up the T’bird 500 on a chilly morning and the heavy duty starter motor whirs in vain for a few seconds before waking up the heavy duty mill. As it clears its throat, it sends the whole motorcycle into a spasm before settling into a lumpy, cold idle. 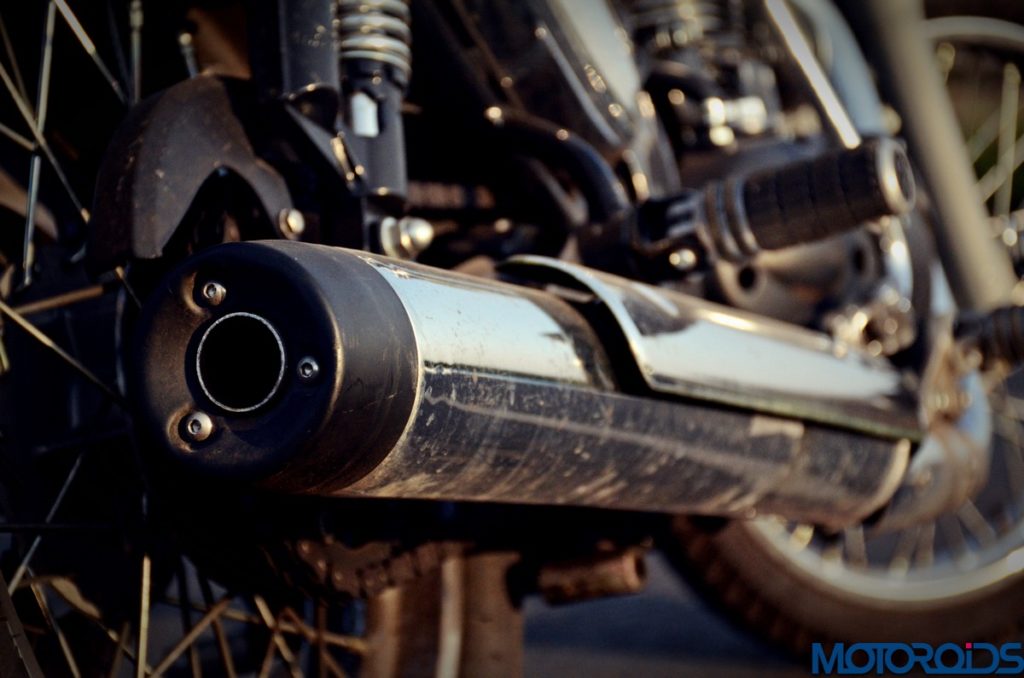 The chromed exhaust emits a muted thump that’s lost in an indistinct chatter of tappet noises – the new sound of Royal Enfield that we kind of never gotten used to. Then there are the vibes. Even at idle, there are enough vibrations to let your fingers and toes ring.

Cold first gear clunks into place with a sound that won’t be out of place at a blacksmith’s, and the clutch feels rather hard. Am I supposed to accept all of this as a part of the ‘RE charm’ they talk about? I did.

It grows till it becomes a part of you.

With time however, I changed my mind, stopped being sarcastic, and starting exploring the nuances that make a Royal Enfield special. And I wasn’t disappointed. 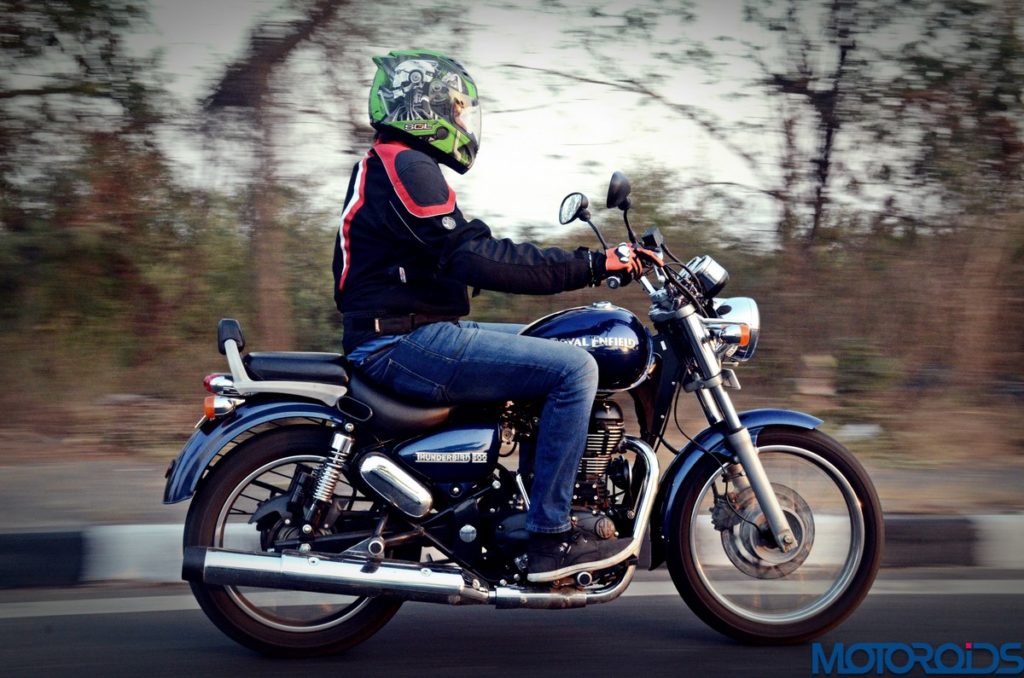 At speeds it’s most comfortable in (60-90 km/h); the T’bird 500’s riding experience is unmatched. And by that I mean that it is unmatched by any other motorcycle on the road. This is where you enter the Royal Enfield zone; the sweet spot of these machines where their sublimity resides.

The vibrations magically vanish, and T’bird thumps away happily as it settles into a mellow cruise. There’s this old world, easygoing charm in its gait that modern hardware can never offer.  It’s something characteristic of the long-stroker.

UCE, twin spark plugs, electronic fuel injection; it might have it all. But they’re all backstage players. On stage, it is still the evocative riding experience that’ll communicate with you on an inner level. 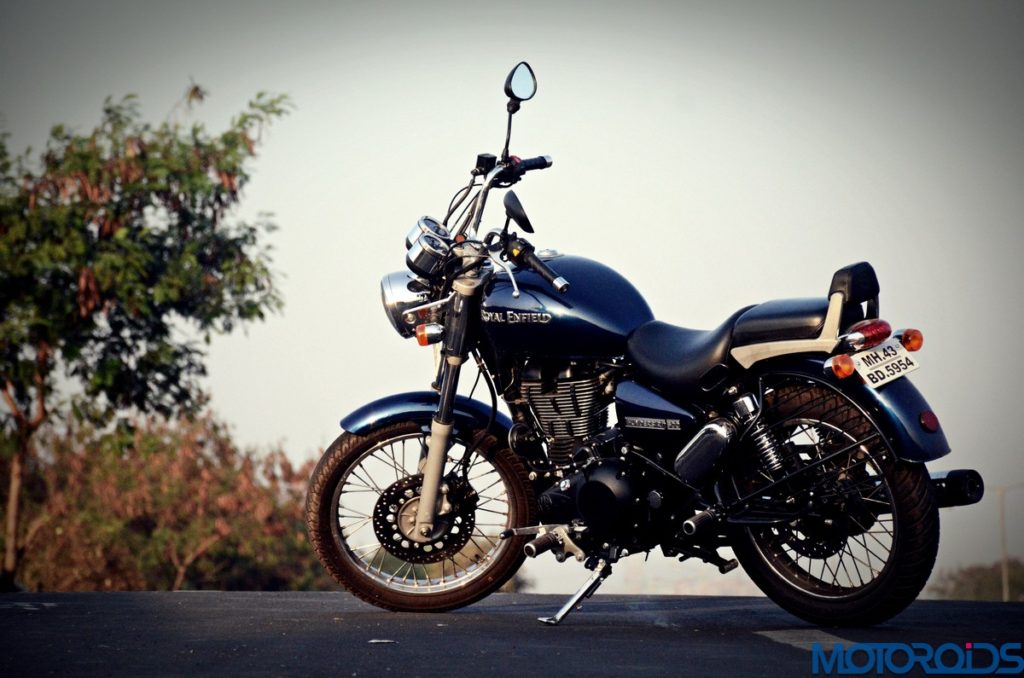 And that’s what I love about the T’bird’s engine. Sure, fuel injection means throttle response is progressive, and the modern construction ensures smoother operations, but these new applications work gracefully in the background, never interfering with the unique riding experience.

It’s like retro riding with (relatively) modern tech; the best of both worlds. It’s like giving you a chunk of experience from the past, but just the fonder bits of it, as the new tech does away with the need to be masochistic.

Since this is a 500, there’s the torque; quite a bit of it. But then there’s weight to be shifted too; quite a bit of it. The Thunderbird tips the scales at under 200 kgs. But the combination works. In lower gears, if you need to escape a traffic scuffle with a bit more haste than it permits an RE, you can.

A handful of throttle at low speeds will see you ride a wave of that thick torque. It doesn’t matter if you’ve got Tanmay Bhatt riding pillion or Shakira. There’s barely any perceptible difference in the thrust, a characteristic no other motorcycle in its class can boast about. The weight further ensures that things stay planted on the ground, so it’s actually a win-win situation.

The 500 also adds an extra pair of legs in any gear, which means you’ll be comfortably ahead of fellow road users in everyday commuting. However, ride the T’bird aggressively and you understand it was not meant to do so. The same, charming long-stroker groans in protest, and the vibrations threaten to crack up the handlebars. 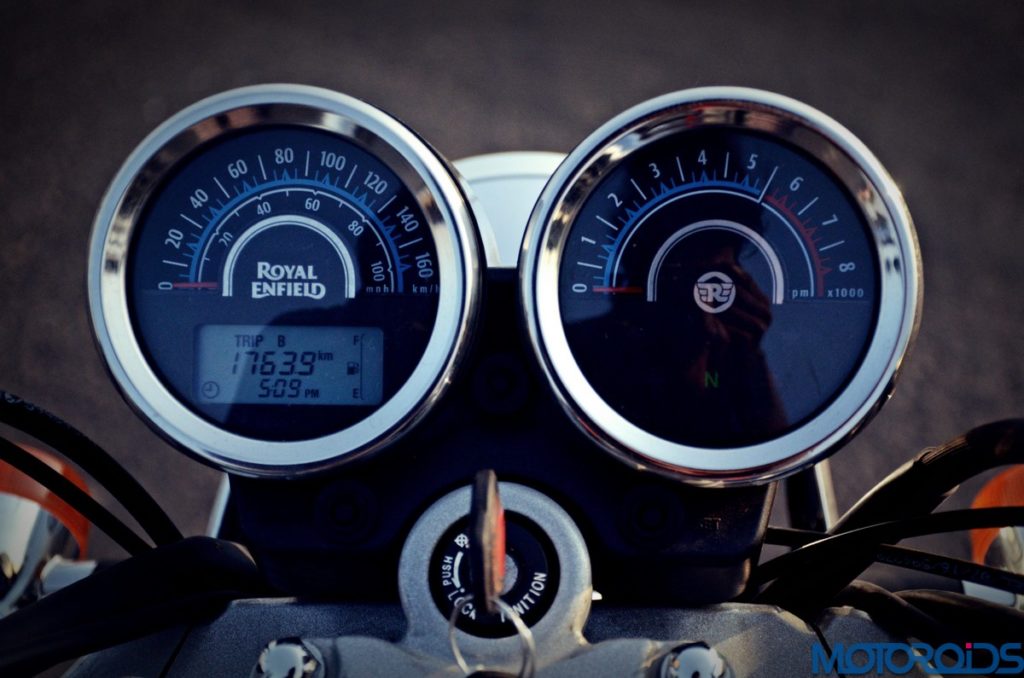 I saw an indicated 130 kph on the speedometer, a lovely chromed gauge with classy fonts, but at that point, things became a blur as the vibes became literally unbearable. This is not a motorcycle to be hustled. It might allow you to be a little more aggressive because it’s around got 150 cc more than its brethren, but that’s about it.

Even though it’s at home on the highway with its commendable ride quality and all, it won’t cruise merrily at three digit speeds. Which is something that can get to you on a long ride if you like making brisk progress. Then my friend, the T’bird isn’t for you. It’ll happily sit at 80 kph all day long, and do short bursts till 110 kph or so, but anything beyond that and you’d be instigating protest. 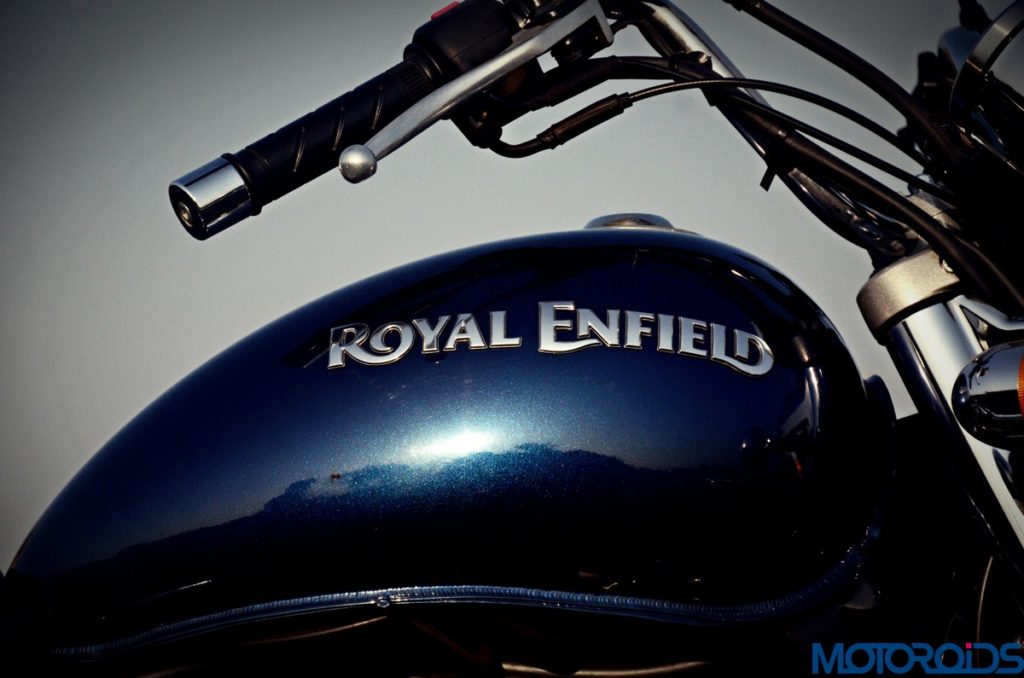 In the city, the firepower is enough, but does it feel a bit too fat to be manoeuvred through the urban jungle?  The tall handlebars feel surprisingly ergonomic, and the easygoing riding position means you’re arms do not feel like jelly after an intra-city run. The torque is always there for company, and the weight always keeps it grounded. 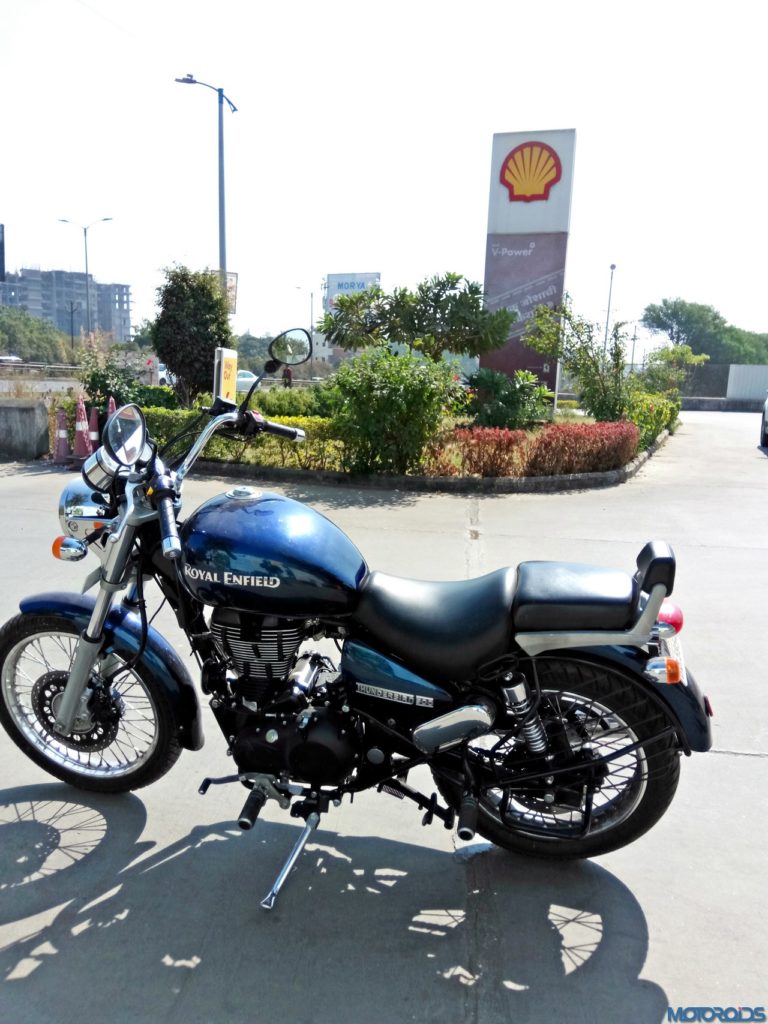 Just getting the efficiency related questions out of the way – the Thunderbird 500 always gave me northwards of 30 kpl while taking it easy. The worst I managed was 20 kpl.

In fact, the T’bird felt like a handier tool to cut through traffic than the Bullet and Classic. As for the exhaust note, it becomes deeper and richer in bass as the engine warms up after a spirited run, with the occasional pop on the overrun. The new sound isn’t all that bad after all. Even the transmission butters up after some riding, allowing for smooth shifts. 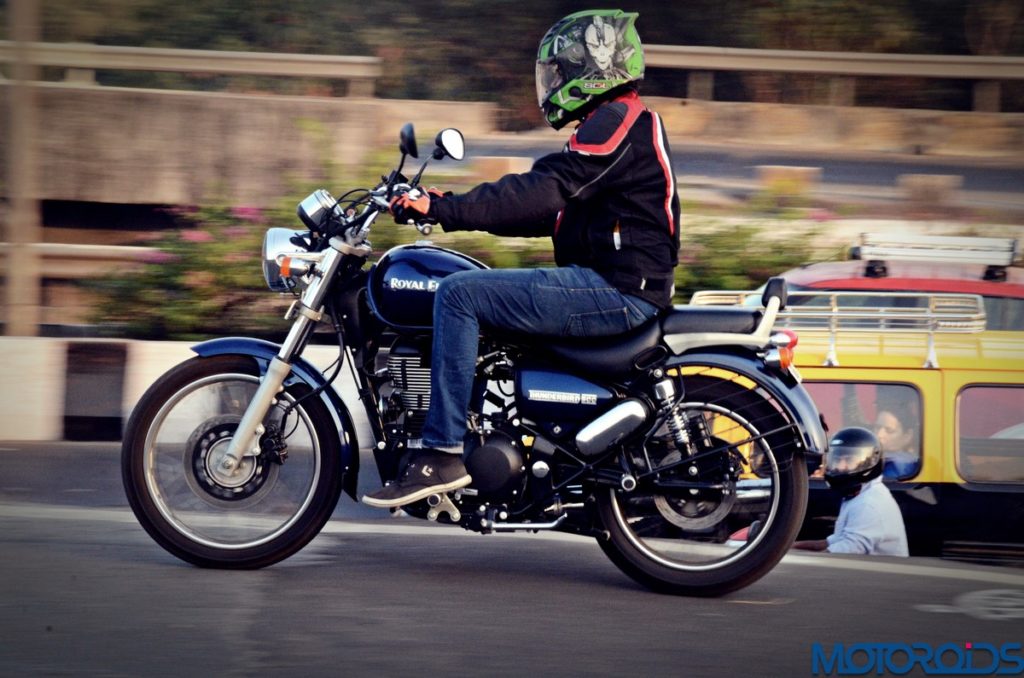 For a bike that’s designed to be a royal throne on wheels, the Tbird’s handling is not disconcerting or unnerving, and you never feel like – “Oh my god, I’m going to end up in a heap of chrome and blue metal” – when you’re approaching a bend.

Around a bend, the TB500 will never show signs of killing you. It follows your thoughts and gets the turn done, even though its softly sprung. Get too aggressive and you can hear the beautiful pegs scrape against the ugly asphalt. 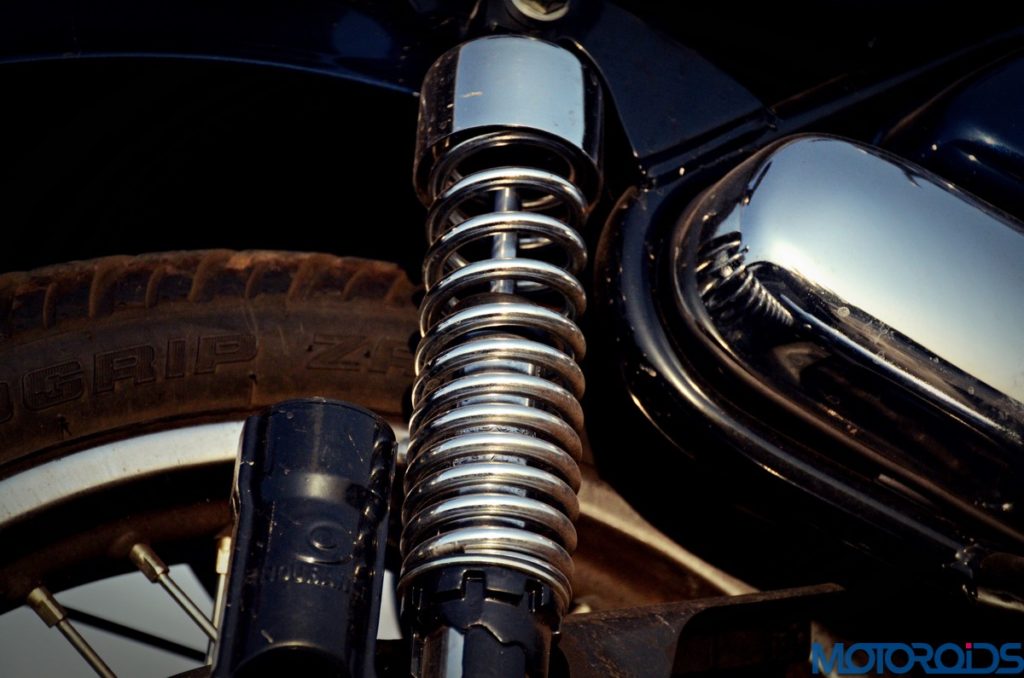 The shocks are impressive, and the Thunderbird rides like mush, a ride quality that is in a league of its own. Look down and you can see the front forks effectively devouring imperfections on the road, and letting very, very little to filter through the handlebars. The same can be said about the gas charged rear shocks.

The anchors are pretty capable, and before the Himalayan came along, the Thunderbird was the only RE that sported rear disc brakes. 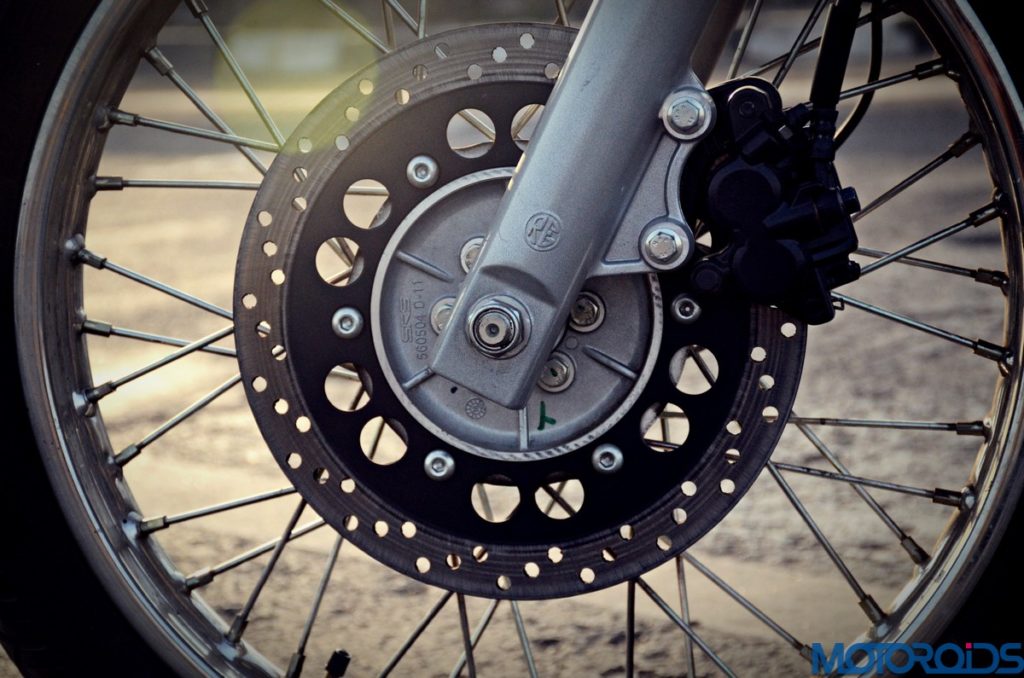 Unfortunately, our test bike had leaking front forks, and the oil spillage constantly lubricated the front disc – something not very nice to have. That caused the front disc to become virtually ineffective, but that’s just a one off case I’d like to assume. 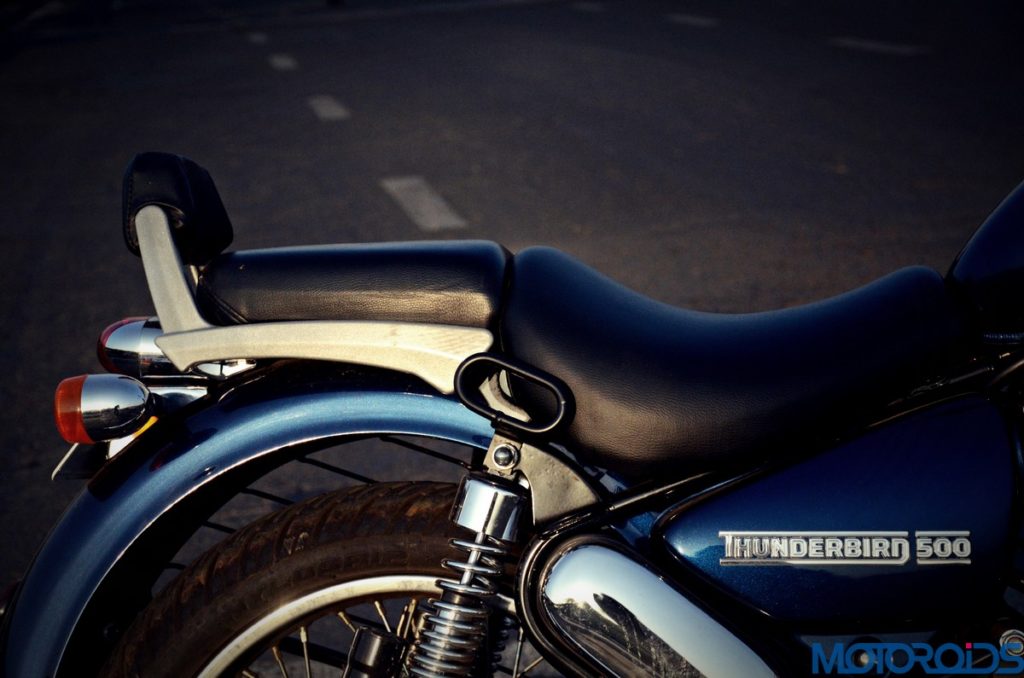 The split seat is very accommodating and supportive, but could have done with a bit more cushioning. 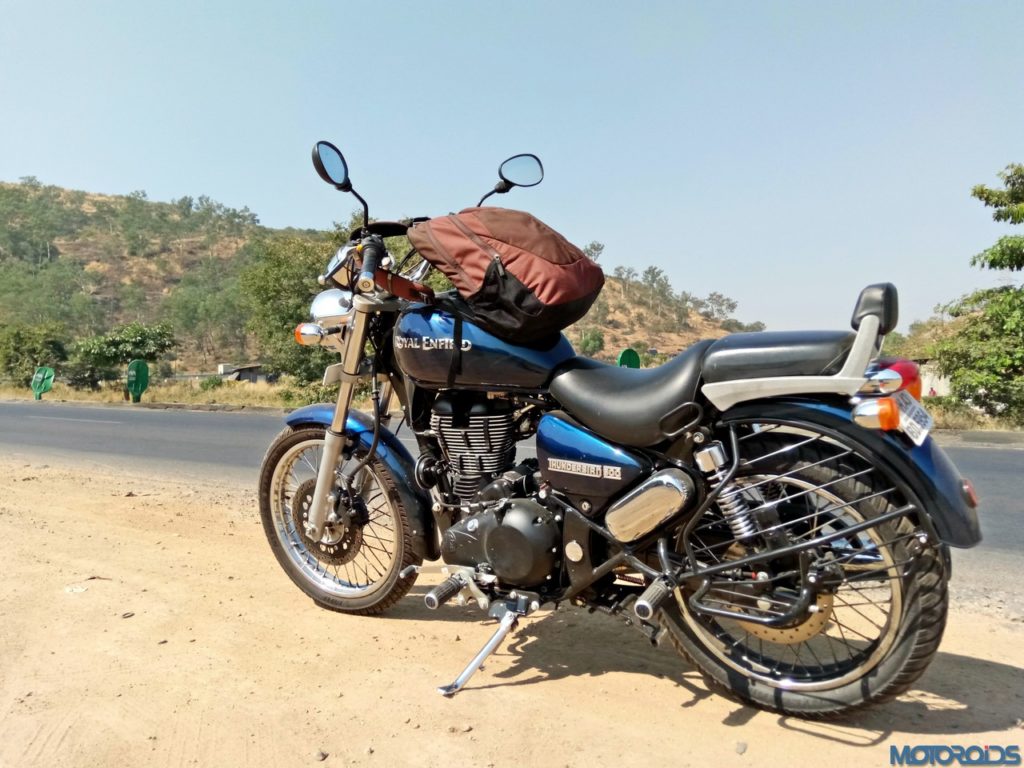 It’s difficult to please me. But I’m not the type of person Royal Enfield is looking to please anyway. The T’bird is for you my friend, if you like your motorcycles to be an extension of your ego, a loud, metallic, chromed entity that makes a statement.

But I didn’t fall in love with it because of all that faff.

I fell for it because I understood its true nature and accepted it the way it is. I rode it like it was supposed to be ridden, realising that it fills a much needed gap in motorcycling; one that isn’t concerned with red lines and lean angles; one that is all about going back to the roots of motorcycling, and stay there; one that’s more about freedom than anything else. 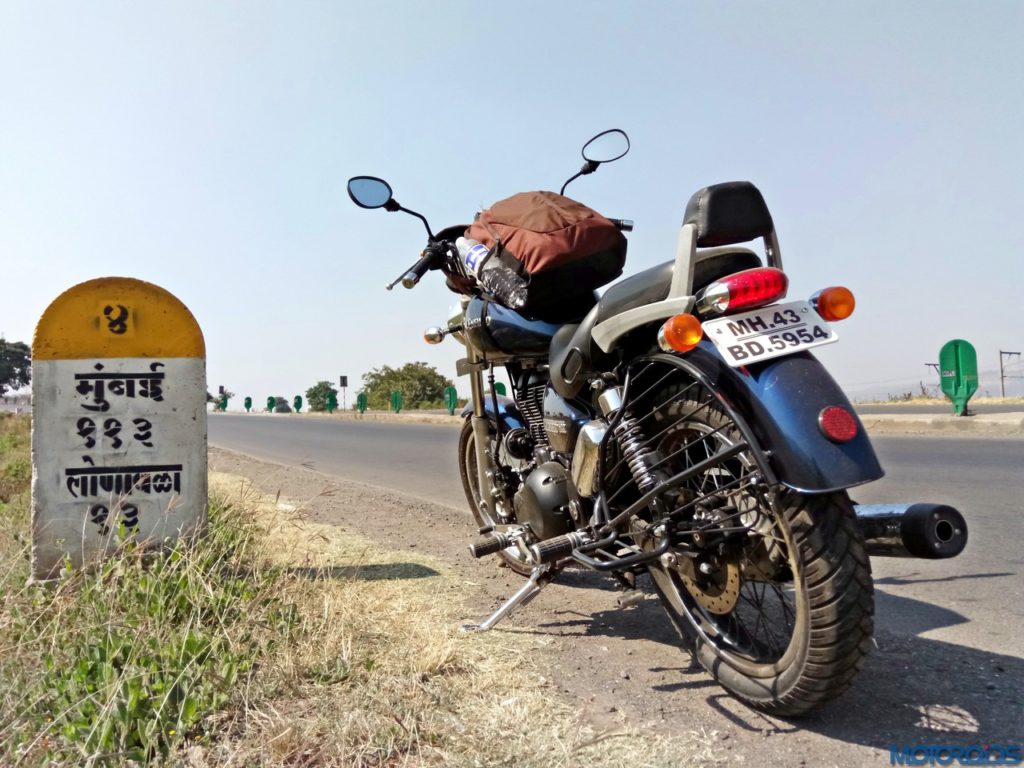 Would I take it for a long ride? Only I if don’t have other choices. But I know when I’ll enjoy it. On those introspective rides into the night, when I just want to get into the feels without the adrenaline shots, or on those rides in town with someone special, when substance matters over speed.

It’s like rock and roll. It never gets old.