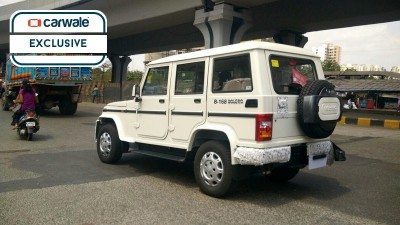 If it ain’t broke why fix it? That seems to be the motto behind the Mahindra Bolero, which has consistently been India’s bestselling utility vehicle since half a decade. Over the years, tweaks to be Bolero, some significant, some not so much have helped its cause and stay fresher than ever. It’s time for another subtle tweak again, as these spy images suggest. A test mule of the upcoming 2016 Mahindra Bolero suggest that the updated MUV will sport a series of minor updates. 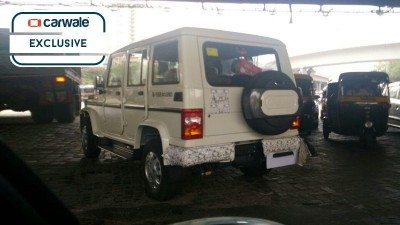 Judging by the images, the Bolero facelift is expected to get a smaller tailgate handle, amber coloured tail lamps and a mildly tweaked rear bumper. Changes to the front fascia remain unseen at the moment but we reckon there’ll be minor updates to the grille, headlamps and bumper. The interiors could benefit from updated upholstery, new features and improved material quality.

As for mechanical updates, the Bolero facelift is expected to continue with its tried and tested running gear – a 2.5-litre turbo-diesel engine that’s rated at 63 bhp and mated to a five-speed manual transmission. Earlier this year, reports indicated of a sub-4 meter long Bolero in the works, so it’d be interesting to see how Mahindra positions the hacked MUV in the face of its own NuvoSport and TUV300 vehicles.