Home Auto and Motor Shows 2016 Honda Brio facelift spotted : To be showcased at the 2016 Auto Expo?

Already past the middle of its life cycle and staring at the introduction of a new model, the Brio seems to be readying itself for a facelift. The sales of the model haven’t been anything to bring a cheer at Honda India. The small, feminine demeanour of the car, along with a lacklustre interior and absence of a diesel option impeded its sales prospects. However, it seems like Honda is readying a facelift to try and see if the sales of the model could be bumped up with the infusion of some cosmetic and feature related changes. The images of this rumoured facelift model have been spied in Indonesia.

The car in the images gets a good dose of exterior changes. The small, cutesy chrome grille of the current Brio seems to have been replaced with a wider, more aggressive glossy black piece. The headlamps receive more details inside to break the softness of the teardrop shape and lend the car’s eyes some attitude. The front bumper has been revised too, and now gets sportier faux side intakes with fog lamps resting within. The central air dam is also more pronounced and extends ahead in a wing-like fashion. 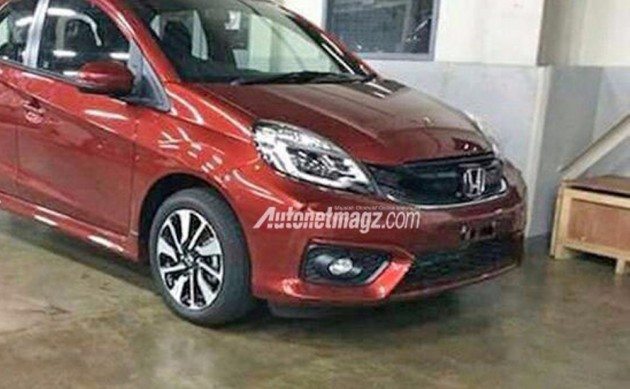 On the sides, the wheels seem to be an inch bigger than the 14 inchers on the current Brio, though we really don’t think Honda will increase the size of wheels for the Indian model. The new diamond cut alloys with black highlights also point at a sportier disposition for the facelift. One can also see mildly sporty side skirts in profile, adding some more raciness to the visuals. The changes on the car are akin to the RS kit available for the Mobilio. In fact, upon the first sighting, our friends in Indonesia suspected the car to be an aftermarket upgrade. However, the overall styling is just too neat and cohesive to be an aftermarket package.

Looking at the subtly sporty details, the possibility of an RS version for the Brio being introduced in India can also not be entirely negated. Engine and transmission options will remain unaltered and we hope to meet the new Brio at the 2016 Auto Expo. The car may be unveiled at the motor show, followed by a launch at a later point.