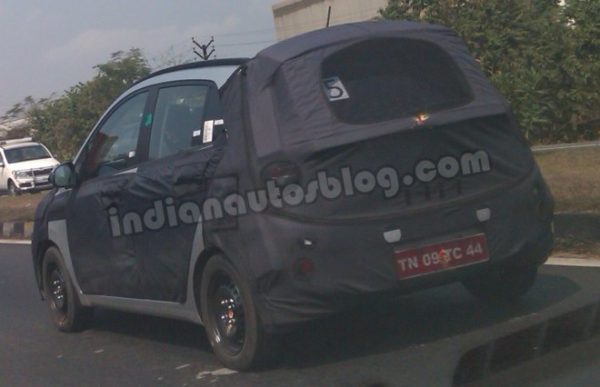 That the next gen 2014 Hyundai i10 is coming to us is a well known fact. The new i10 has been spotted testing in India on numerous occasions and a safe guess would be that the new car would be launched in India soon after its international debut. The Hyundai i10 has to be among the most successful small cars to have come out from Hyundai Motors India ltd. While there is no denying that the India-spec i10 is fast losing out to diesel powered competition that has arrived in the form of the Chevrolet Beat and the likes, there used to be a time when the Hyundai i10 outsold every other car in its segment and sent car manufacturers running back to their drawing boards.

Hence, the new i10 is going to be a very important launch for HMIL and we won’t be too surprised to see the new car upping the ante in its segment. There is no denying that the Korean auto maker knows a thing or two about making well sorted out small cars and the i20 and the current gen i10 are enough evidence of the fact that the Hyundai hatchbacks have what is required to take on the Japanese rivals.

The biggest factor for the drop in sales of current i10 is the rising fuel prices and Hyundai Motors India Ltd. is all set to deal with this issue by launching the new i10 with both diesel and petrol engines. The 2014 Hyundai i10 (codename: BA) will make its public debut in mid 2013 and we reported in detail when it recently emerged that the new i10 might be named as the Hyundai Brilliant in our car market.

We reported in detail when it emerged that the Korean auto maker has decided to benchmark the new i10 against the Volkswagen Up! The Up! is the smallest car in VW’s line up and is quite popular in most markets it is sold in. The car has been caught testing in India again and it seems like the Indian subsidiary of the Korean car maker is busy testing the i10 against some of its ‘would be’ competitors in India. The car has been seen near Hyundai’s Chennai plant and was being driven along with a group of cars that consisted of Maruti Swift ZDI, Ford Figo TDCI Titanium and Maruti Ritz VDI.

The new 2014 Hyundai Brilliant will come with class leading cabin space, features and will have a striking exterior styling. The diesel engine powering the Brilliant will be a three cylinder version of the i20’s diesel engine. This motor i10’s/Brilliant’s diesel engine will have a peak power figure of 68 bhp and a max torque rating of 160Nm. The new car will have a fuel economy of 24-25kmpl. The petrol engine that will power the new car will be the same 1.2 litre variable valve tech Kappa engine that powers the current car.

It is being said that the 2014 Hyundai Brilliant will be launched with an attractive price tag and the car might be as much as INR 35-45,000 cheaper than the base variants of i20 petrol and diesel.