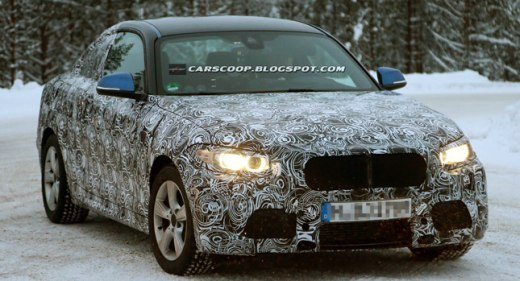 We have been regularly reporting about the upcoming BMW 2 Series of cars that are currently being developed by the popular German premium car maker.

This simply means that the 2 Series of cars will be a new body variant of the BMW  1 Series and will be target the car buyers looking for a stylish, premium but “cheaper than 4 series” BMW.

Seen here is 2 Series Coupe that has been caught undergoing cold weather testing.

Powering the new 2-Series Coupe will be a range of four-pot motors in both petrol and diesel guises.

The petrol engines will have power in range of 150 to 218 hp and the diesel motor will have a max power of 214hp. The engines will be mated to a six-speed manual ‘box as standard and the car will have an option of an eight-speed auto transmission.

There is also an M Power variant which will come sometime after the 2 Series has been launched. To be called as the BMW M235i, the performance variant will be powered by BMW’s six-cylinder TwinPower turbocharged engine which would be tuned to have a max power output of about 320PS.