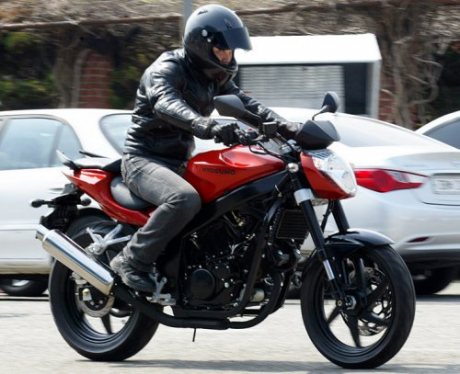 Only yesterday we commented on the action in the 250cc arena heating up, with fresh news on production of the Suzuki GW250 beginning in China coming in. Another good news flowing in today is that of the 2012 version of Hyosung’sGT250 having been spotted testing. Hmm, was that the reason why Hyosung didn’t introduce the model in India in the first place?

Hyosung sells two models in the 250cc class. One is the naked streetfighter version, namely GT250, and the second one is the fully faired GT250R. The bike caught in the act was the naked version. In its 2012 guise, the GT250 still preserves most of the current gen model’s design cues. The shape of the tank, side panels, seat, frame, everything remains the same. There are a few minor changes though. The headlamp has been completely revamped. The traditional circular design, has given way to a more macho looking Yamaha FZ-esque unit. Heck, even the crown above the lamp is reminiscent of the FZ. Have Hyosung deliberately copied the design? The design is just too similar to be considered a coincidence.

Everything else from the exhaust, to the wheels, to even the RVMs remains the same. The GT250’s twin cylinder engine packs quite a punch, and we don’t expect any changes under the skin.

Hyosung is already under a lot of pressure in India after Kawasaki’s shock pricing of the Ninja 650R sent its India plans sinking. Unless the bikemaker brings smaller, locally manufactured and more affordable models here, it would be an uphill task for them to get their products moving out of their showrooms.

We are quite sure Hyosung would bring the GT250 to India in due course. It’s more a matter of when then whether. The Korean company must be busy finalizing its localization strategy. The moment they have their cost structure sorted to compete with the likes of the CBR250R, they will launch this baby here. And we wouldn’t complain, would we? Here’s the detailed spec sheet of the Hyosung GT250