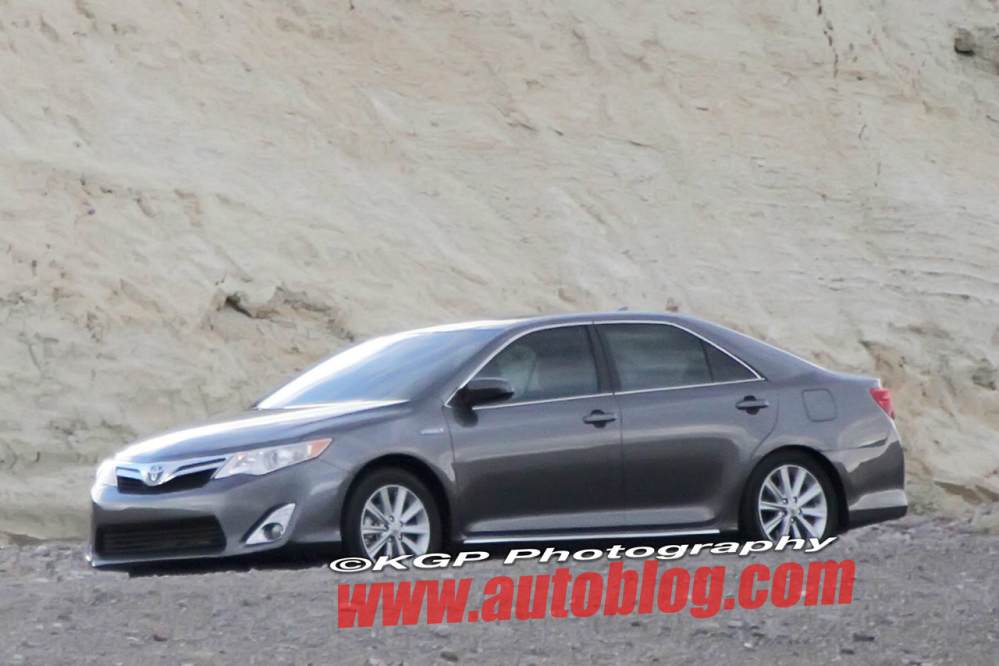 Only yesterday we showed you some pictures of the new Toyota Camry, taken from what were apparently its leaked brochures. Here we have now the totally undisguised images of the top selling sedan in the US. From what’s apparent there is not much time left before all the beans are spilled on the new car, as the company has already told everything that is there to be told about the car to the media. It’s just that the information is still embargoed, so we’re still whetting our appetite with these spy pictures.

These spy pictures of the brand new 2012 version of the Camry was shot when the car was posing for a video shoot. Apparently that chrome heavy grille is that of the hybrid version of the car, and not the usual petrol-only propelled unit. The conventional model will probably look more sober, and won’t be so keen on reflecting light back to the sun.

In its newest avatar, the Camry seems to have retained the overall proportions (if not exactly the size) of its predecessor. We can still relate with the new Camry as a vehicle which is in some way related with the previous gen car. Major changes are visible at the front, and at the rear. I am no fan of that big chrome grille. It’s overkill for me. And like that was not enough, Toyota have added some more of that shiny bit around the fog lamps as well. But those shaped headlamps, and those mildly chiseled lines definitely make the car look more athletic.

While no official word is out yet, the 2012 Toyota Camry is expected to use a 2.5 liter petrol engine with power output in the region of 180bhp. Then there will be a more powerful 3.5-liter V6 with an output of about 270bhp. Both engines will come mated with 6 speed manual and auto transmissions.

The new Camry should arrive in India sometime late in 2012. Expect all the official details on this extremely popular car to be revealed in a matter of a few days from now. Rely on us to get you all the info first. In the meantime, do let us know your views on what you think about the design of the 2012 Camry