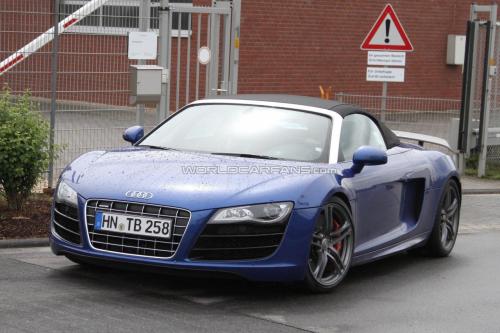 We told you that a new Audi R8 GT Spyder is on its way, just recently the spy images of the 2012 R8 GT Spyder emerged and Boy does it impress with its looks. The 2012 model carries forward the genes of the current R8 GT with similar GT body kit and that jaw dropping 19 inch of metal wheels grouped with a massive spoiler in the back.

The heart of the supercar will be the same as which does duty on its GT sibling. Yes we are talking about the powerful 5.2-liter V10 engine that develops a monstrous 560PS and a thundering 540Nm of torque. 0 -100 is like a blink of eyes which comes at around 3.8 seconds and a top end of not less than 311km\hr.

With quite a few R8 owners here in India, there is surely a market for these exotics in India but there are floating rumours which say that it will be a limited edition with just 333 lucky owners. So we wonder if this car would make it in India if there are stipulated numbers. The 2012 Audi R8 Sypder will make its first public appearance at the Frankfurt motor show this year.