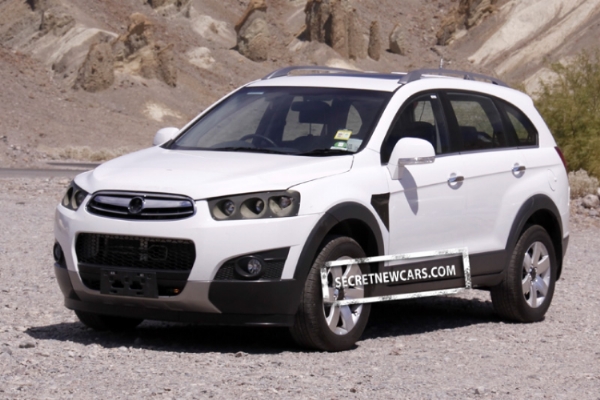 New spy pics of the 2011 Chevrolet Captiva have emerged. The SUV in the photos uses a grille faceplate designed for Opel. However India will get a honeycomb grille as shown in the earlier spy shots. The front end draws inspiration from the upcoming Aveo sedan / U-VA hatch which in turn are based on the Chevrolet Aveo RS Concept show at last year’s Detroit Motor Show.

For more Spy Shots of the 2011 Chevrolet Captiva and to know what we reported earlier, head over to the next page>>>

The Chevrolet Captiva will soon undergo a facelift. The 2011 version of the hot selling SUV for GM India is being readied by the American company. We have stumbled upon the spy picture of the new car while surfing through the web, and it seems the pretty SUV will soon get its first facelift after its launch in India.
The refreshed SUV will adopt Chevrolet’s current design philosophy, and will sport a split grille treatment a la the Cruze. The headlamps have been elongated and made sharper at the edges. The front lamps are also tilted at a slightly higher angle inwards than earlier. The fog lamps, which were placed quite high on the bumper earlier have now been taken to the bottom of the bumper. The black lining on the edge of the wheel arches has been thickened to add a sense of muscle and sportiness to the machine. The design of the front bumper itself has been changed and it now juts out slightly off the line of the top portion of the grille. The Chevy bowtie which was earlier placed above the bumper of the grille now rests on the slat on the bumper which divides the upper and lower portions of the grille.

It’s been more than 4 years since the SUV was first introduced in the international marker. It has not undergone any changes ever since. We don’t expect any mechanical changes on the car, although the interiors may be refurbished a bit. The price of the new car can be expected to remain unchanged. The car should be here by early 2011.