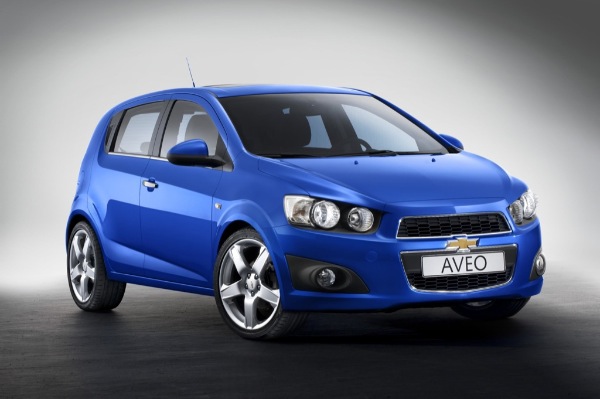 After confirming the premiere of Chevrolet Cuze Hatchback and Orlando MPV at the upcoming Paris Auto Show; Chevrolet has confirmed today, the debut of its new 2011 Chevrolet Aveo and has also released first pics and details. Chevrolet had first displayed the  new Aveo show car at the Detroit and Geneva motor shows earlier in 2010 and the one to be showcased in Paris is said to be the final production- ready model.

Visual highlights of the new Aveo includes the aggressive looking front with its exposed twin- headlamps and dual port grille, compact taut body panels with a rising shoulder line and short rear overhangs and ‘hidden’ rear door handles. The new Aveo also features ESC and ABS brakes as standard and the new model is also longer and wider than the current model. Inside the new Aveo, the most striking feature is the motorcycle- inspired instrument cluster which houses an analogue tachometer combined with a digital speedo and warning lights. Up- market blue backlight features on the centre console while the front cabin is enveloped in wrap- round fascia. There is also plenty of storage space in the centre stack and features an audio system with USB, aux- in and Bluetooth functionality.

A comprehensive range of four cylinder petrol and diesel engines will be housed in the new Aveo RS. The petrol range includes a 1.2 litre (at 86 hp) version and 1.4 litre (at 100 hp) unit. And for the first time, Aveo will be offered with two versions of a 1.3 litre diesel engine (at 75 hp and at 95 hp) featuring Start/Stop technology. Manual transmission of 5 or 6 speed will be available based on engine choice and Chevrolet’s first 6- speed automatic transmission on a small car will feature on the Aveo 1.4 as an option in most markets.

The 2011 Chevrolet Aveo will hit the Europeam market in May 2011 and thereafter in the Indian market. No information on pricing has been revealed yet.