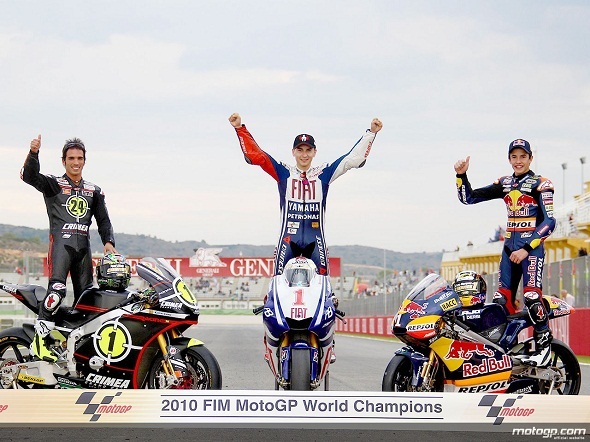 2010 MotoGP World Champion Jorge Lorenzo stamped his authority after clinching 9th win of the season at Valencia. Casey Stoner and Valentino Rossi finished 2nd and 3rd respectively as they said goodbye to their respective teams.This year the Valencia round was special as it was the last time to watch Stoner on Ducati and Rossi on Yamaha. The weather conditions were normal here unlike Estoril. Casey Stoner was on pole position. Rossi was struggling with grip issues so he could only manage 4th spot on the grid. Marco Simoncelli showed his best qualifying performance as he secured the third spot. At the start of the race both Fiat Yamahas made a bad start and were running behind the leaders. Gradually Jorge Lorenzo was trying to move up but the Honda Gresini rider Simoncelli was making it very hard for the 2010 World Champion. They touched a couple of times and this carnage messed up Lorenzo’s rhythm in early stages of the race. Nicky Hayden crashed at second lap of the race. This time it was The Kentucky Kid to lose the front end of the Desmo.

Meanwhile Valentino Rossi was making progress through the riders as he was up into 3rd spot in no time. Lorenzo also made a move on Simoncelli but this time he made it stick as he blocked Marco’s line.There was nothing to choose among top four riders. They were all setting similar lap times but then both Fiat Yamaha riders upped their pace and overtook Dani in one move.At the back the Estoril battle continued at Valencia as Andrea Dovizioso and Marco Simoncelli were both involved in a head to head fight. When Rossi and Lorenzo both took Pedrosa on lap ten, Stoner was still 0.8s clear but the Fiat Yamaha duo quickly closed him down. Rossi finished over eight seconds behind Lorenzo for the second race in succession as he ended his glittering Yamaha career in third. Rossi put up a rousing fight but it was obvious on lap 21 that he was struggling to match Lorenzo and Stoner’s speed. He’d dropped over a second adrift of Stoner at that stage and just a lap later he was two seconds behind the fight for the lead.

The fight for fourth was another great encounter in which Ben Spies came out on top as he rode his final race with Monster Yamaha Tech 3 before moving up the factory team. The American was battling it out with the Repsol Honda rider Andrea Dovizioso and San Carlo Honda Gresini rookie Simoncelli to the end with the Italian pair completing the top six.

There was yet another disappointment for Loris Capirossi was he couldn’t even finish his last race for Rizla Suzuki.

Lorenzo’s final point’s tally of 383 is also a new record for the most points scored in a single season in the MotoGP class. He broke Rossi’s record of 373 Points from 2008 season.

“Coming here to Valencia I really wanted to win one more time in this fantastic season, in front of my home fans,” Lorenzo said. “In the practices I was fast all weekend, but it seemed like Casey was even faster. I made a good start today but in the second corner trying to pass Casey I got overtaken by three or four riders, then I had a hard fight with Simoncelli when I nearly fell! I kept calm after that and concentrated and then lap-by-lap I recovered. I had a wonderful fight with Casey at the end. Winning here in front of my home crowd at this special track is one of the happiest moments of my life. We are proud to have got the record for the most number of points with 383; I used to be known as a crazy rider who crashed too much so to demonstrate consistency in this way makes me proud.”

Just like Welkom 2004 it was very emotional moment for Valentino Rossi as he said goodbye to his Yamaha M1 bike.

“Honestly I’m happy with this final result with Yamaha, because we had a difficult weekend here,” Rossi said. “I didn’t get a good start but I realized straight away that I was much faster today and that my bike felt good. At one point I thought I might be able to win but in the later part of the race I just didn’t have enough strength to stay with Lorenzo and Stoner, this is a very hard track when you’re not completely fit. I started to make a few mistakes because I didn’t have enough power to stop the bike so after a bit I decided it was better to slow down and keep my third-place. Arriving on the podium was my way to say thank you to my bike, to Yamaha and to all the people who have worked with me in these seven seasons. It’s been a great experience and I have enjoyed it so much.”

Now the testing for 2011 bikes is about to commence from Tuesday onwards. Motoroids will keep you updated with Rossi’s Debut on the Ducati Desmosedici. Watch this space.