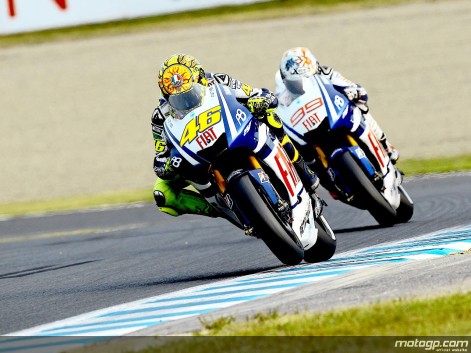 Casey stoner clinched his second successive win during the 14th round in Motegi,Japan. Stoner was qualified 2nd behind Andrea dovisiozo who scored his first ever MotoGP pole position. Valentino rossi was also back in the 1st row since Lemans round. Title contender Dani Pedrosa had to sit out of the race as he broke his collarbone in three places during Friday practice sessions. On race day stoner got the holeshot as he was leading the race in first corner. Despite being qualified in 2nd row of the grid Jorge Lorenzo made a nice start and overtook Rossi at within two corners. Ben Spies (Monster Yamaha Tech 3) and Nicky Hayden (Ducati Team) ran off at turn 5 together only on the second lap of the race. Later on they dropped down the order.

Up ahead stoner was still leading the race and lap by lap he was showing some serious pace. Meanwhile Rossi was shedding the gap between him and Lorenzo. On every turn he was closing in on the Spaniard and finally made a move on lap 5. Dovisiozo tried his best to stick with Stoner but he couldn’t do anything to upset the rhythm of the Australian.

Just after few laps stoner was safely clear of the Italian as he kept extending his lead. At the back Colin Edwards was having a close fight with Honda Gresini rider Marco Simoncelli. After making a mistake Ben Spies too was moving up the order quite furiously.

But  the real excitement was drawn from team-mates Rossi and Jorge Lorenzo’s intense battle for the final spot on the podium. Both Fiat Yamaha riders locked horns with each other in last 5 laps. They were banging fairings with each other and trading paint. Lorenzo tried every tactic on Rossi but at last Rossi showed him who is the real master of such close battles. In a recent interview with the Italian edition of monthly magazine GQ, Valentino Rossi has said that his rivals Jorge Lorenzo and Casey Stoner “hate” him but that such animosity is “normal”. The Italian did not show any mercy in his maneuvers on Lorenzo at every corner.

Valentino Rossi finished 3rd behind Casey and Dovisiozo. Lorenzo and Edwards finished fourth and fifth Respectivley, with Simoncelli sixth and Bautista seventh. Spies Randy de Puniet (LCR Honda) and Hiroshi Aoyama (Interwetten Honda MotoGP) completed the top ten. In the absence of the injured Dani Pedrosa, Lorenzo’s lead at the top of the Championship was extended to 69 points.