A large part of the country has been affected by the spike sudden in temperature over the past few days. We’ve been taking various measures to protect ourselves and our prized possessions from the blazing heat from the sun. The residents of Vidyavihar’s Skyline Oasis Co-operative Housing Society, however, wouldn’t have thought in their wildest imaginations that the tarpaulin sheets which were meant to protect their vehicles from the harsh sun rays would become the cause of an even severe damage.

As many as 15 luxury cars, parked in Skyline Oasis Co-operative Housing Society’s podium parking, were charred due to the intense heat. As reported by Mumbai Mirror, fire brigade officials suggest that the trapped heat caused one of the cars to catch fire, which then spread to others vehicles parked in the vicinity. It took nearly two hours to control the fire. 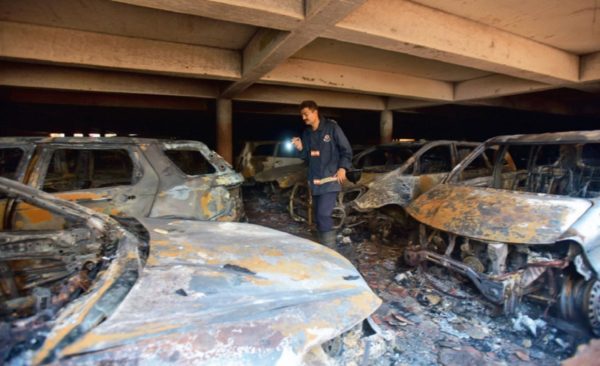 Speaking about the fire, BD Patil, Station Officer of Kurla Fire station, said, “It is a known fact that a stationary vehicle can catch fire if it is in a confined space. The leather seats, the fuel, etc are all combustible. The heat must have been trapped in the parking area for a long time. Then one of the cars must have caught fire, leading to a chain reaction.”

The cars that were damaged in the incident included a BMW, Land Rover Discovery, Honda Accord, Toyota Innova and WagonR. The daily also reported that there is a dispute between the society and the builder about the parking space.