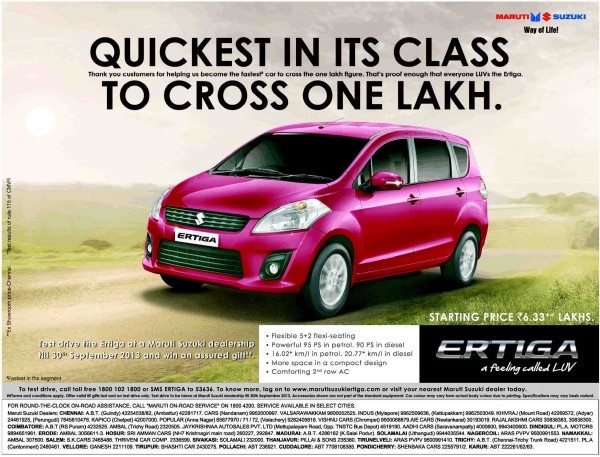 It has emerged that Maruti Suzuki India Ltd (MSIL), nation’s highest selling car maker, has managed to sell more than 100,000 units of its Maruti Ertiga MPV in a short span of 17 months. On August 31 2013, sales of the popular MPV in India stood at a whopping 101,041 units. It may be noted that the Ertiga was launched in early April last year and has been shattering sales records ever since.

The manufacturer claims that the Ertiga has been the quickest in its segment to cross the sales milestone of 100,000 units.

So well has the Ertiga made an impression on prospective car buyers that it has not just been a success story in India but has also managed to take the MPV-centric Indonesian car market by storm. In Indonesia, the Ertiga is also being sold by Mazda, which has re-named the MPV as the VX-1.

It would have been safe to predict a bright future for the Ertiga had there not been a Brio-based Mobilio MPV in sight. The Honda Mobilio MPV, akin to the Amaze, would be based on the Brio hatchback and would be first launched in Indonesia. The India launch of Mobilio hasn’t yet been announced but it is being expected that the car will be here by mid next year. Honda officials have claimed that the Mobilio would have segment leading space and the performance & fuel efficiency would be at par with those from the rivals. In India, the Mobilio would be sold with the Amaze’s 1.5 litre iDTEC diesel engine, which is nothing short of being a gem of  a low capacity oil burner.

Other than the Mobilio, the Ertiga could also face competition from the recently unveiled Datsun Go+. The Datsun Go based MPV might not come across as being as premium but would definitely have an edge over the Ertiga in the pricing stakes.

With two seemingly potent rivals up ahead, it would be interesting to see if the Ertiga would continue to post stellar numbers on the MPV sales charts in India and Indonesia.