Toyota Motor Sales (TMS), U.S.A., Inc., today announced Corolla global sales of 1.22 million units in 2013, according to the company’s internal data based on individual vehicle sales reporting from its distributors. The 5 percent year-over-year increase confirms the Corolla’s perennial popularity among loyal customers in approximately 150 countries and regions around the world.

“The Corolla stands as the international face of Toyota and touches millions of people across the globe every day,” said Bill Fay, Toyota division group vice president and general manager.  “Being the world’s best-selling car speaks volumes about the satisfaction and loyalty our customers feel about the Corolla and Toyota.”

Thanks to the recent redesign, including amplified elements of design and improved fuel economy, Corolla’s worldwide cumulative sales since its introduction in 1966 topped 40.72 million units as of February 2014, making it the all-time best-selling vehicle model. Based on Toyota’s analysis of Polk new vehicle registration data from IHS Automotive, which captures 96 percent of global new vehicle volumes, the Corolla is the world’s best-selling vehicle model for 2013 with global registrations of 1,098,524 million units.

This figure includes Corolla sedan and other variations in name such as Corolla Axio, Corolla Altis and Corolla EX 4-door sedans.  The subscripts “Axio” “Altis” and “EX” denote trim levels of the 4-door Corolla sedan sold in various global regions, including Japan.  Also included are the Corolla-badged Fielder and Rumion 5-door wagons. Based on Toyota’s analysis, various competitive claims based on “single nameplate” registrations may have excluded data for Corolla Axio, Corolla Altis, Corolla EX, Corolla Fielder and Corolla Rumion, which are identified and marketed as Corolla sedans and wagons. In the U.S., the all-new Corolla posted sales of more than 300,000 units in 2013, a 4 percent increase year-over-year.  In 2013, 97 percent of all Corollas sold in the U.S. were built in North America. Corolla was named a top safety pick in 2013 by the Insurance Institute for Highway Safety (IIHS), and was awarded a 5-star rating for overall safety by the National Highway Traffic Safety Administration (NHTSA), which is the highest grade given by the agency. 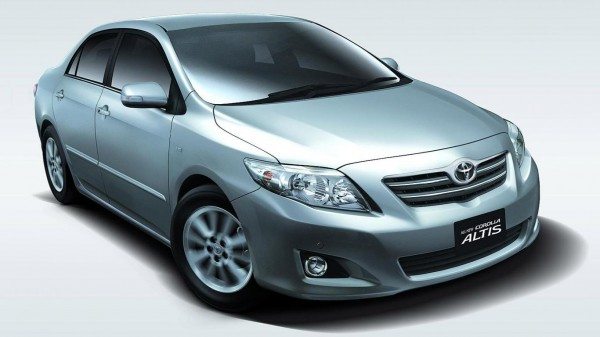