There is no denying that Maruti Swift is one of the most affordable fun-to-drive hatchbacks currently available in the Indian market. Ever since it was launched globally, everybody could find an uncanny resemblance with the iconic Mini Cooper. Ever since then, there have been many attempts to make it look like a Mini Cooper through after-market modifications.

Now, we have come across pictures which shows us a similar attempt being made to convert a Swift to a Mini Cooper although it doesn’t look very promising. The pictures show a modified current 3rd-generation Swift with tail lamps inspired from a Mini Cooper. The glow pattern of the tail lamps on this Swift mimics that of the Mini. It resembles the Union Jack, which is the national flag of the United Kingdom. 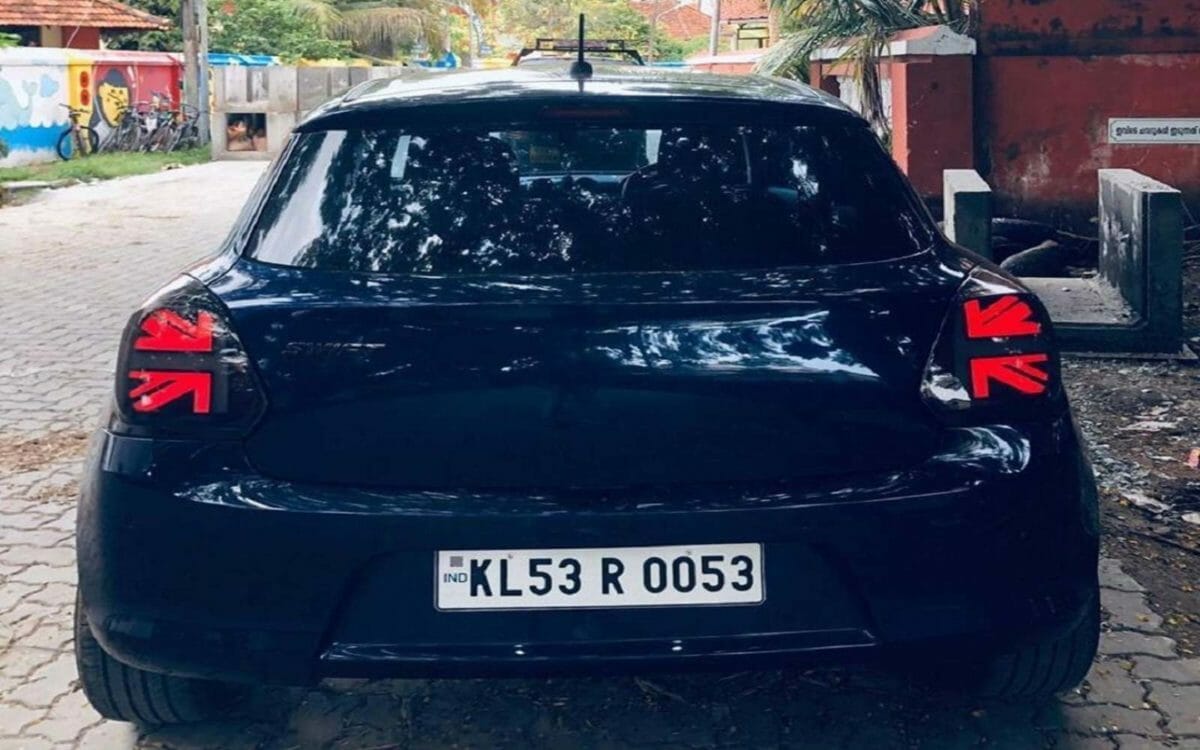 The modifications have been made possible thanks to the tail lamps provided by N Vogue Auto Designs, a modification shop based in Karol Bagh, Delhi. They also stock various other aftermarket parts for the Swift. Speaking of the tail lamps, they are full LED units. The glowing element is made up of a detailed combination of LED tubes, which gives the tail lamps a clean look. These units also get Audi-like sequential turn indicators. To keep the fancy theme intact, the tail lamps feature smoked theme.

Apart from these tail lamps, the Swift in the pictures is also fitted with a set of aftermarket alloy wheels. The sporty looking 17-inch multi spoke alloy wheels that are wrapped in wide-section tyres improve the hatchback’s road presence. The resemblance of the Swift with the Mini Cooper lies in the flat, floating roofline and its bonnet area. The differences lie in the boxy, squared-off design of the Cooper whereas the Swift comes in a bit rounder design.

Also READ: How Fast Did The Tata Sierra Go?

The mechanical aspect of the car hasn’t been altered at all. The Swift comes powered with a 1.2-litre K-series 4-cylinder naturally-aspirated petrol motor which is capable of belting out 83 PS of peak power and 113 Nm of max. torque. It can be mated to either a 5-speed MT or a 5-speed AMT. At 21.21 kmpl(ARAI rated), it is one of the most fuel efficient, BS6 compliant petrol units.

However, Maruti Suzuki is also working on a mid-life facelift of the third-gen Swift which was officially revealed a few weeks ago. The Swift , currently comes with a 1.2L K-series petrol engine. The 4-cylinder naturally-aspirated motor is capable of belting out 83 PS of peak power and 113 Nm of max. torque. It can be mated to either a 5-speed MT or a 5-speed AMT. The facelifted Swift is expected to come with the same 1.2L DualJet motor as the Dzire facelift. With the new motor in place, the Swift facelift is likely to put out 90 PS of peak power, while the torque output will remain identical to the outgoing model.

Maruti Suzuki currently retails the Swift at a starting price of Rs 5.19 lakh, which goes up to Rs 8.02 lakh (both prices, ex-showroom). The car competes against the likes of Ford Figo, Tata Tiago, Hyundai Grand i10 Nios among other hatchbacks in the country. Although the owner of the above shown Swift has made an attempt to make it look somewhat like a Mini Cooper, truth being told, just changing the tail-lamps doesn’t fulfill the required modification.